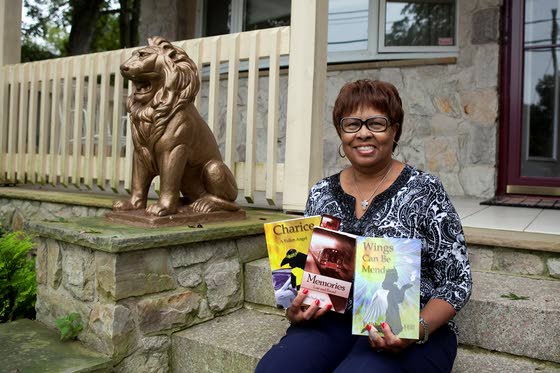 Edith Hughes-Hill, of Pleasantville, sat on her front steps recently, holding the three novels she has released since taking up writing in 2008. ‘I have so many stories within me,’ she said. 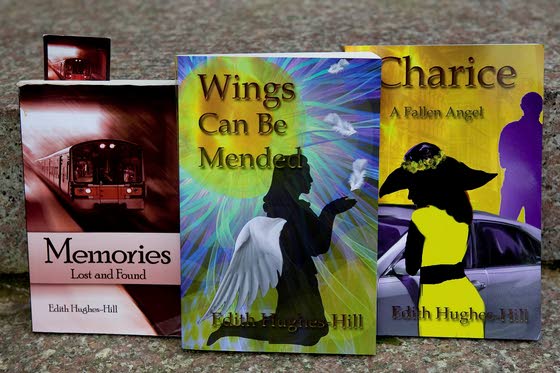 ‘Wings Can Be Mended’ is Pleasantville resident Edith Hughes-Hill’s most recent novel, a sequel to ‘Charice — A Fallen Angel.’ Her first novel is ‘Memories — Lost and Found.’

Edith Hughes-Hill, of Pleasantville, sat on her front steps recently, holding the three novels she has released since taking up writing in 2008. ‘I have so many stories within me,’ she said.

‘Wings Can Be Mended’ is Pleasantville resident Edith Hughes-Hill’s most recent novel, a sequel to ‘Charice — A Fallen Angel.’ Her first novel is ‘Memories — Lost and Found.’

Edith Hughes-Hill is on a roll. She started writing seriously in 2008. Since then she has released three novels. "Wings Can Be Mended," which came out earlier this year, is a sequel to her second book, "Charice." It focuses on the life of a Philadelphia woman in the insurance industry. Charice is struggling to pull her life together and turns to Christianity.

"My husband filed for divorce three years ago," Hughes-Hill, 71, explained from her Pleasantville home. "And so that's when I started writing."

She worked most of her life as an assistant in her husband's Philadelphia-based nonprofit organization, but she also has worked in the insurance industry, prisons and as a missionary. Since deciding to take up writing, she has recognized it as her calling.

"I'm not a night person," she said. "My girlfriend gave me a book on how to write your first novel. She gave it to me in about 2000. She said to me, 'You know, you missed your calling.' I wrote all my husband's letters and business things. So I had become a good writer, and I didn't even think of it."

As she honed her skills, friends began to ask her to write about them, and she even included some in the novels.

"One was named Malika, and she's short and she's small," said Hughes-Hill. "She said, 'Aunt Edie, write about me. Put me in the book. But I don't want to be like me, I want to be taller and all that.' So I made this chapter called 'Malika' and I put her in the book.

In other instances she sends the manuscripts to friends, and they tell her what they think should happen next. Despite that, she warns against getting friends to edit your final product.

"Well, sometimes they don't want to tell you what they really think because they think they might hurt me," she said. "I just am like, 'Just tell me what you think!'"

In her prolific fashion, Hughes-Hill is already 15 pages into her next book, which may - or may not - be about her.

"I have so many stories within me," she said. "And my lawyer says I should write my own story, so I started but when I did start it so I got a little emotional, so I'm like, maybe I need to back off this."

Her novels have led her to book-signings and talks. On Oct. 8, she'll be featured at the CLC Bookstore in Northfield. Recently, she had a great experience talking to some of her readers.

"I never spoke in front of people before," she said. "But I spoke for half an hour, and I got a standing ovation when I finished. Because I was trying to tell people the importance of understanding that just because you think you can't do something, or in my case my husband would tell people, 'Oh, she doesn't speak.'

"I always stayed in the background and started believing that I didn't have capability. But then I spoke and got a standing ovation."

What: Edith Hughes-Hill speaking about her new book, Wings Can Be Mended.