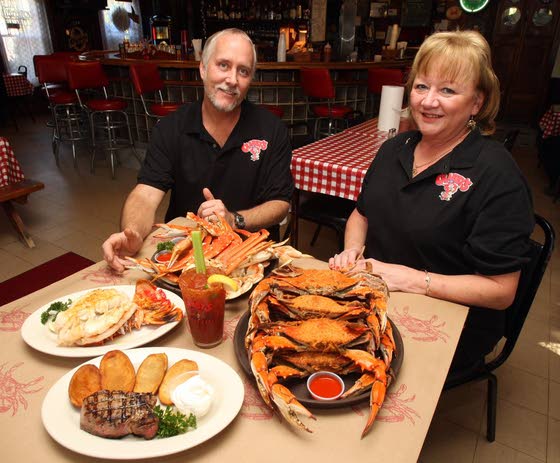 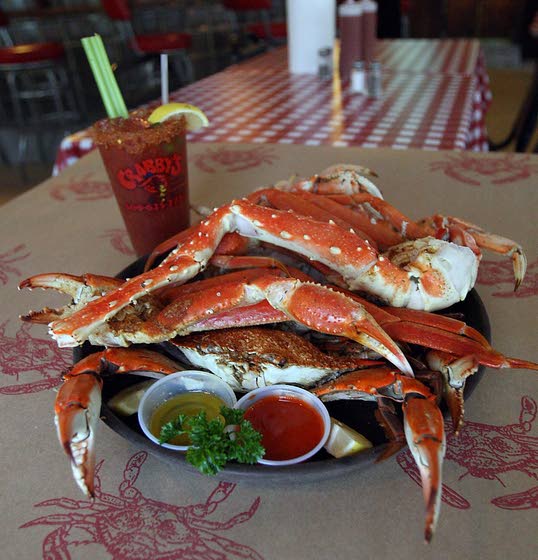 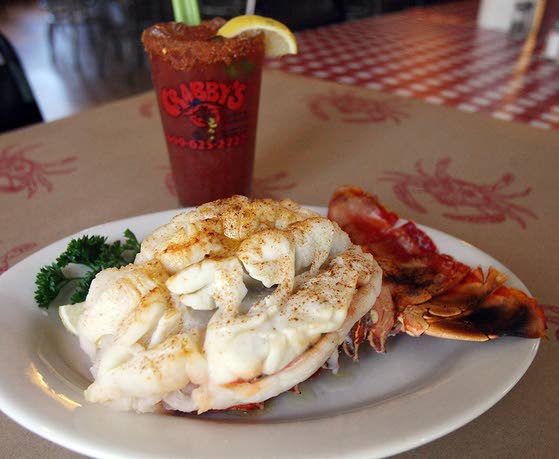 The monster lobster tail is 20 ounces of seafood heaven at Crabby’s in Weymouth Township.

The monster lobster tail is 20 ounces of seafood heaven at Crabby’s in Weymouth Township.

Crabby's, in the Belcoville section of Weymouth Townsip, got its start when a young lady working at Lenox China saw the writing on the wall. Fearing the company would not be in existence forever, she began looking around for something else to do.

Lynn Albanese checked around the area, trying to decide what kind of business it was lacking. She found that a good seafood restaurant was one.

After a lot of homework and plenty of blood, sweat and tears, Crabby's is alive and well and celebrating its 25th anniversary.

Much of Crabby's success rests squarely on her own shoulders.

Fortunately, Albanese has what she calls "seasoned employees" who have been with her for years.

"I am so proud to say I still have the very first employee I ever hired," Albanese says.

Long-term employees include her chef and kitchen manager Brian Sexton, who has worked at Crabby's for 12 years.

Crabby's calls their appetizer section "snackers." Popular selections include a scampi trio of mussels, clams and shrimp ($11.99); breaded clam strips ($6.99); and crab balls ($7.99). More unusual choices include a basket of deep-fried smelts ($7.99); salmon-stuffed scallops ($13.99); and escargot in the shell with garlic butter and spices.

Albanese recommends the crab sampler, sold at market price, that is large enough for two people to eat, with a portion of every different crab that they serve: blue crab, king crab, snow crab and Dungeness crab. Served with melted butter and cocktail sauce, all of the crabs are steamed.

Since prices on fresh seafood are in constant flux, market prices are listed on the blackboard along with daily specials and featured fish of the day.

Crabby's offers plenty of seafood from the steamer or from the deepfryer. All the breading is done in-house, and, of course, they make their own crab cakes and crab imperial.

No surprise, the menu at Crabby's is heavy on seafood of all sorts. Even the pasta dishes are all embellished with jumbo lump crabmeat, clams, shrimp, mussels or whole blue claw crabs.

Shrimp scampi ($19.99) has eight extra large shrimp in a garlic and white wine sauce over linguine, or served as a scampi combo ($26.99) with the addition of mussels, clams and scallops.

"Our scallops are so fresh, they are still twitching," Albanese says. "When you order steamed shrimp from us, you are getting wild-caught Gulf of Mexico shrimp, which to me is the best-tasting and best textured shrimp that you can get."

There is even an 8-ounce prime certified Angus beef burger ($8.99) for the hamburger aficionado at your table, along with some "basket fare."

Crabby's signature dessert is called strawberry delight. It's a do-it-yourself dish of fresh strawberries that you stick on a fork, dip in sour cream, then roll in brown sugar.

Crabby's also has its own house cocktail, the Crabby Mary.

Albanese understands that Crabby's, unlike a chain restaurant, has its own personality.

"I have a bunch of unique individuals working for me and we all manage to pull it together," Albanese says. "We are not a chain; we are anything but corporate. Unfortunately, it's inevitable, that someday there won't be many of us left."

When one store in a seafood chain struggles, the other stores can pull together to help out. Not so for the single-unit, privately-owned seafood restaurants like Crabby's.

As for what the future will bring to the few seafood restaurants still holding their heads above water, "We are out there swimming on our own," Albanese says.

Best of the Press

Crabby's has won the "Best of the Press" award for its crabs from The Press of Atlantic City Reader's Poll nine years in a row.

Crabby's serves fresh hardshell crabs from Maryland and Louisiana year round. Blue crabs are heavy and meaty, not like those frozen specimens from a world away.

Crabby's is celebrating its 25th anniversary the entire month of October with food and drink specials daily. Some specials include: Friday, Oct. 19, is Crabby's reunion party for friends, customers and former employees; Oct. 23 is Tequila Tuesday with $5 Cuervo Gold margaritas; and Oct. 25 is $5 off all-you-can-eat snow crab and steamed shrimp night.

BETWEEN YOU AND ME: Crabby's has picnic tables and regular seating inside. The brown paper on each table doubles as a place for crabs and their shells or for kids to use available crayons. At Crabby's, you roll up your sleeves, dig in and have fun.