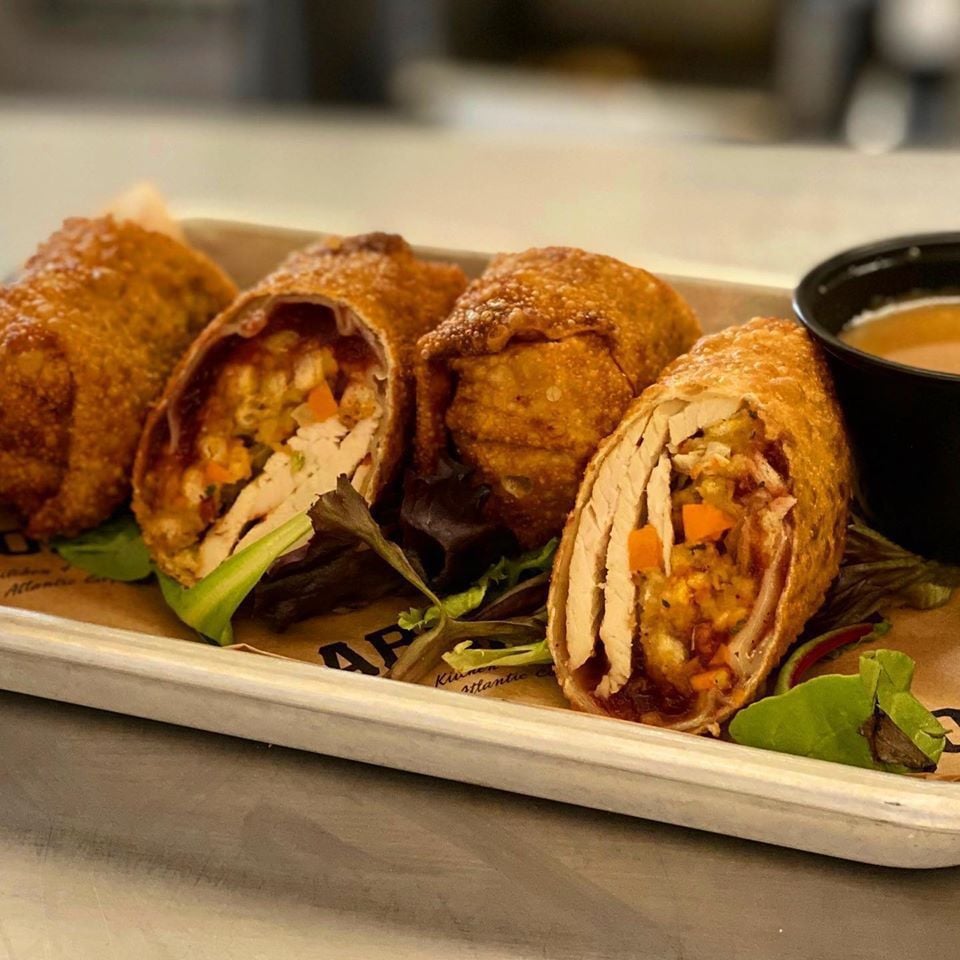 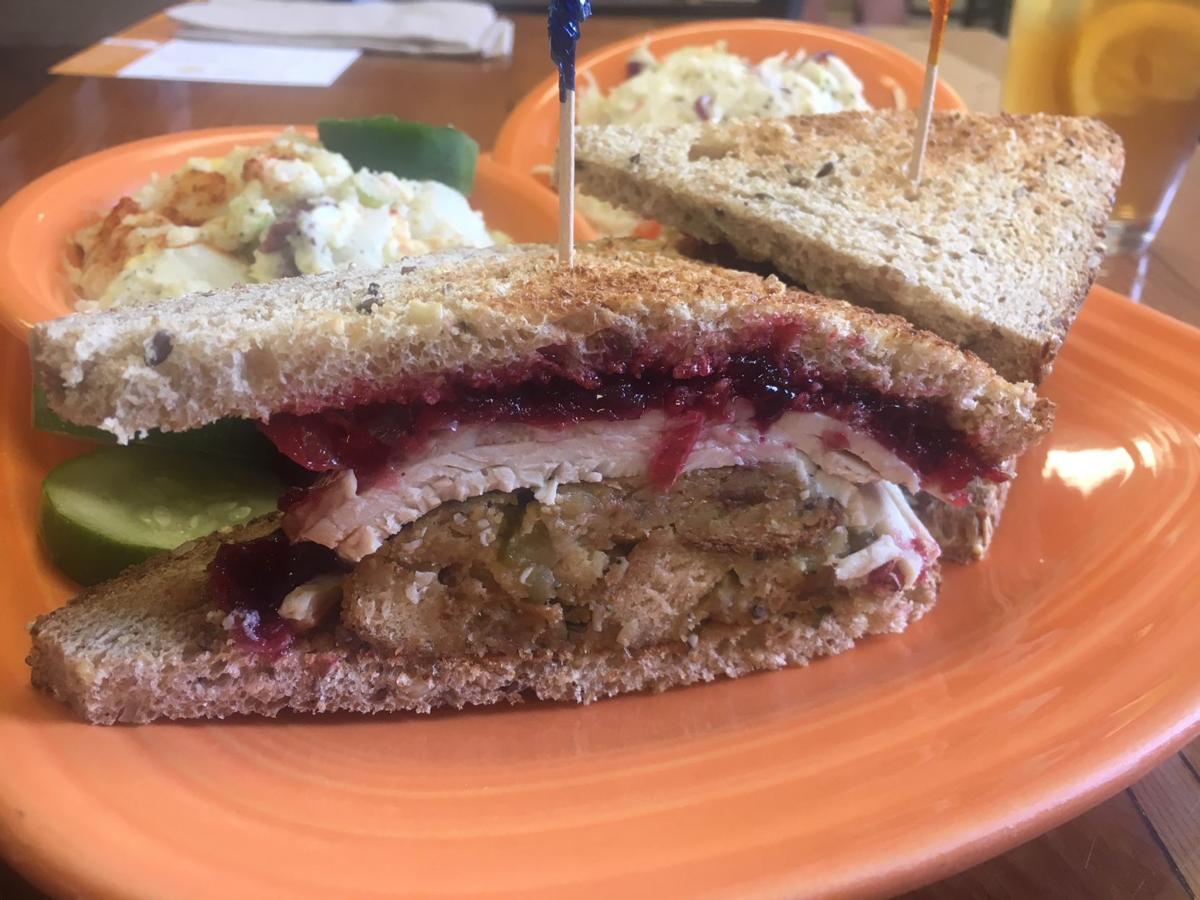 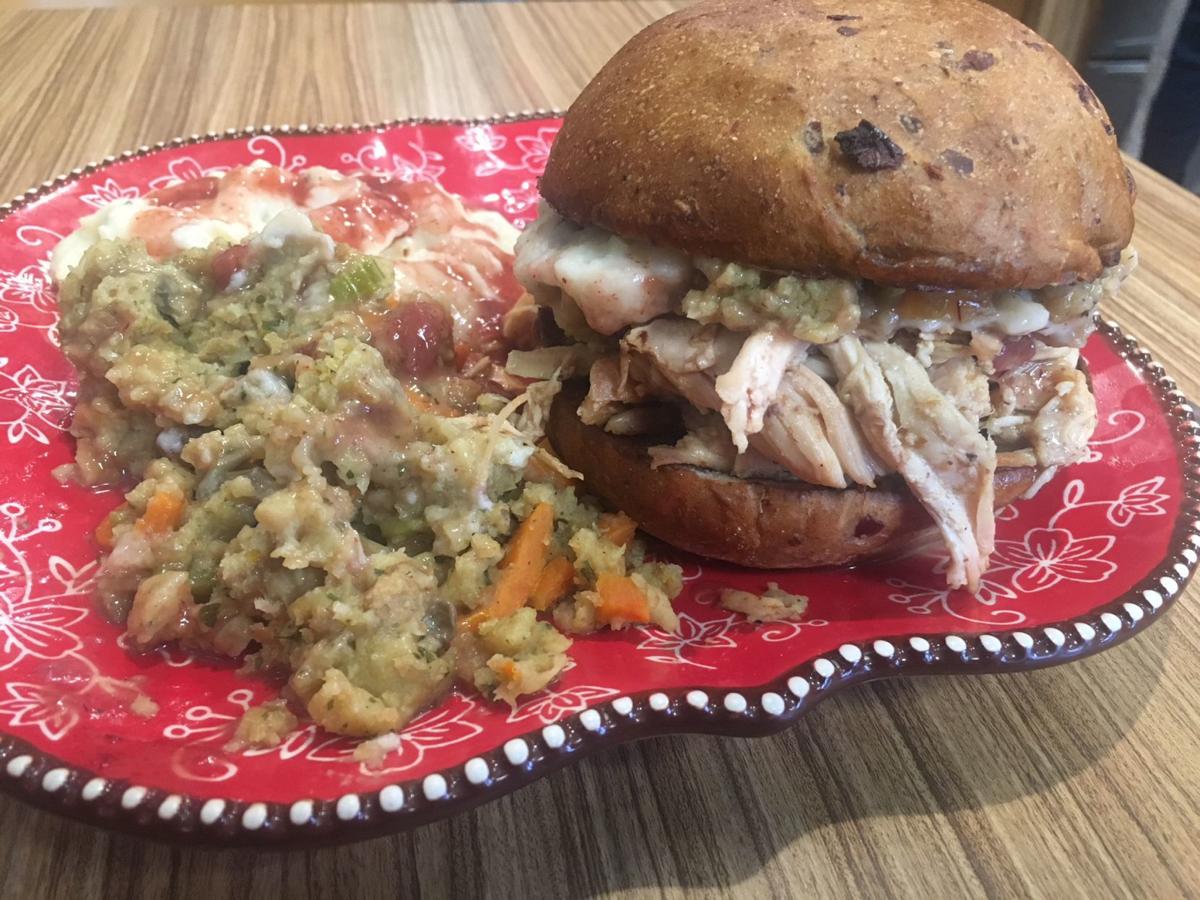 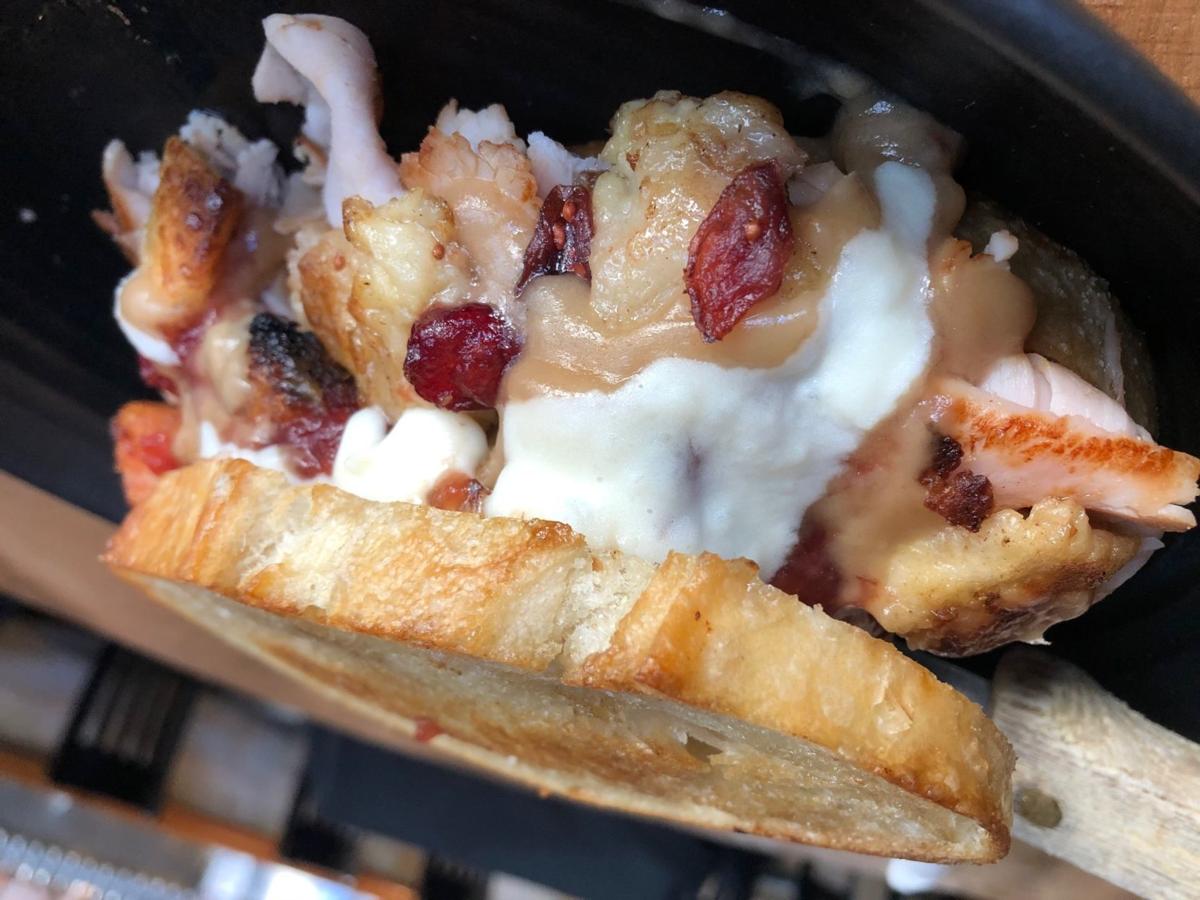 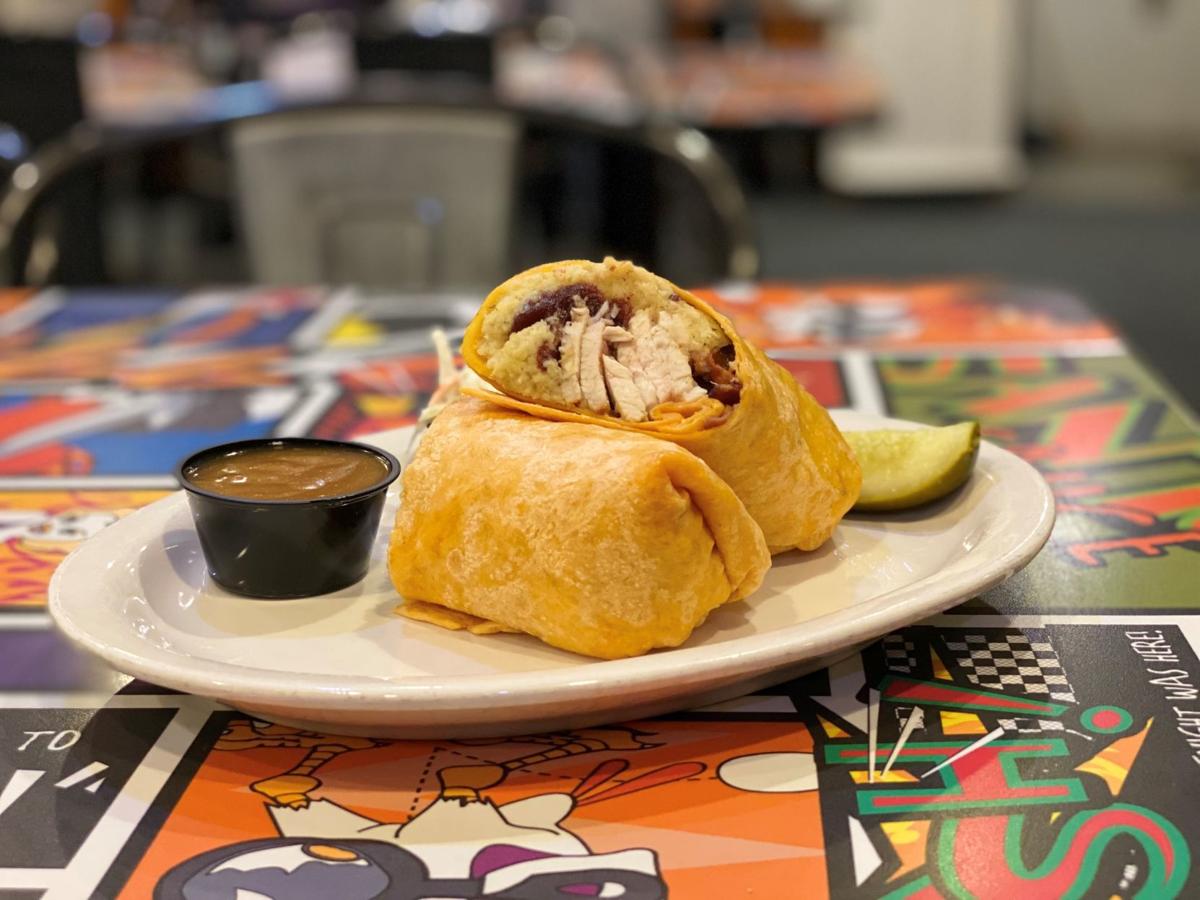 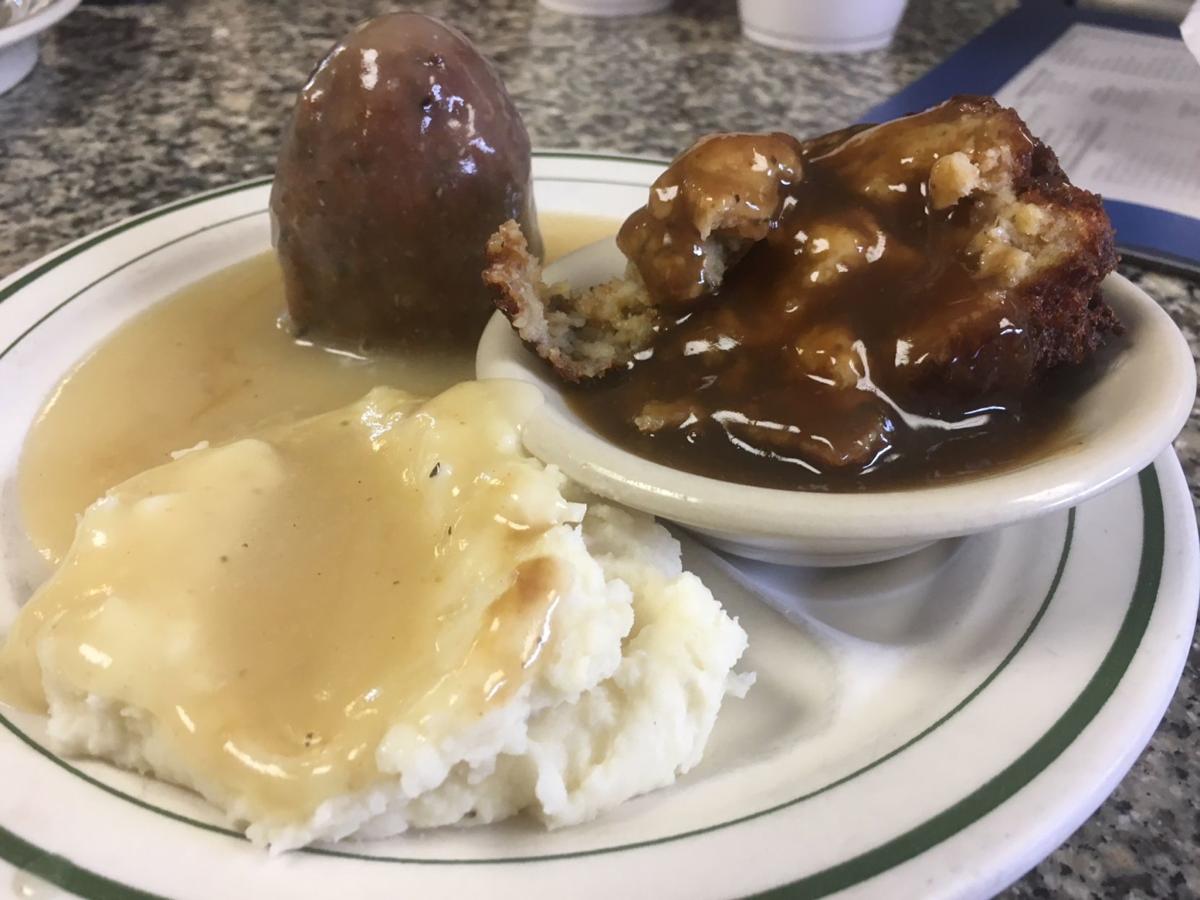 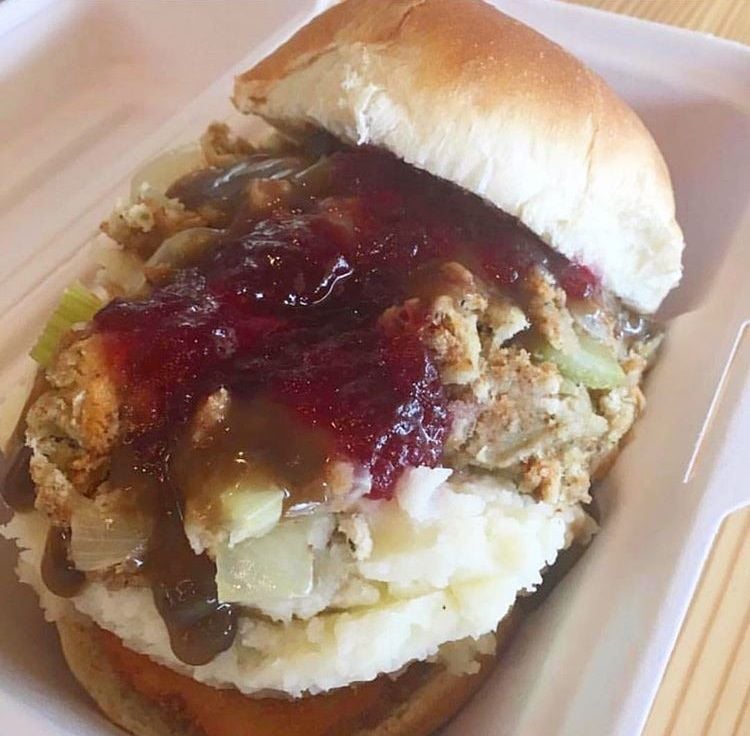 Thanksgiving is a holiday about appreciation. It’s about looking fondly at the blessings of life — friends, family, and, of course, food.

But not just any food. During Thanksgiving, we as a country decide to aim our thankfulness at a specific list of foods, namely turkey, stuffing, mashed potatoes, cranberry sauce and more often than not, gravy. These are the items most often found on plates across America on Thanksgiving Day, and thus by default they end up being re-cast as sandwiches, and other forms of leftover-based dishes in the days following Turkey Day.

But why wait until Thanksgiving to get this culinary party started? Here’s a list of spots serving up awesome Thanksgiving-style grub right now.

There is true magic going on in the kitchen at Wingcraft. We say this because on its surface, the ingredients that make up their Thanksgiving sandwich seem kinda obvious — white meat turkey, stuffing, mashed potatoes, cranberry sauce and gravy. Yet the power and balance of flavors on this sandwich fit together so perfectly. It’s like a Thanksgiving version of Voltron. A definite case of the whole being worth more than the sum of its parts. Bonus points for the fresh bread, which comes buttered and grilled to perfection, bringing just a bit more glory to an already-glorious creation. Wingcraft Kitchen & Beer Bar is located at 2010 Baltic Ave in Atlantic City. Go to WingcraftAC.com.

Sunrise Café’s Turkey Gobbler is an anomaly as it could almost pass for a healthy version of a traditional Thanksgiving Sandwich. The calorie-laden mashed potatoes and gravy found on similar sandwiches are left off entirely, while the standard white bread is swapped out for multi-grain toast. Of course the fresh roasted turkey, homemade stuffing and cranberry sauce offer just enough delicious, home-style goodness to keep you craving this all year long. Sunrise Café is located at 1200 Asbury Ave. in Ocean City. Go to SunriseCafeOC.com.

Every year Vagabond seems to do something creative with their Thanksgiving leftovers, and this year the trend continues with their latest app — The Perfect Bite. Think of it as a Thanksgiving eggroll. Turkey, stuffing and cranberry sauce get loaded into a wonton wrapper before being deep fried and served with a side of gravy for dipping. Who knew Chinese food could work during such an overtly American holiday? Vagabond Kitchen & Tap House is located at 672 N. Trenton Ave in Atlantic City. Go to VagabondAC.com.

Anything but a newbie, Rose’s Garden Grill in Northfield has been offering their Foghorn Leghorn Thanksgiving sandwich since in 2007. And while it may be true that they were serving Thanksgiving sandwiches before any of the other spots on this list, their claim that they invented the entire concept is yet to be proven. But who came up with the concept is unimportant. What is important is that the finished product tastes great, and the Foghorn Leghorn hits it out of the park in that department, with hand-plucked turkey, specialty stuffing, mashed potatoes, gravy and their one-of-a-kind jalapeño-cranberry sauce, all set upon a cranberry and walnut ciabatta bun. It’s a big mess and requires more napkins than a 2-year-old with a birthday cake, but it’s worth it. Rose’s Garden Grill is located at 2605 New Road in Northfield. Go to RosesGardenGrill.com.

5. The Chicken or the Egg

An absolute legend among LBI eateries, Beach Haven’s The Chicken or the Egg (or “The Chegg” as LBI insiders refer to it) produces some of the most Instagram-worthy dishes you will find anywhere. And though they are known primarily for their legendary buffalo chicken, they have been known to dabble with other forms of fowl, including turkey, which is the star of The Gobbler Wrap, a year-round menu favorite. The Gobbler Wrap starts with house-roasted turkey breast then adds cheddar cheese, Cherrywood-smoked bacon, stuffing and cranberry sauce, which gets loaded up in a sundried tomato wheat wrap and served with a side of house slaw and a pickle. The Chicken or the Egg is located at 207 N. Bay Ave in Beach Haven. Go to 492Fowl.com.

The new businesses that are part of the Orange Loop are teaming up for the 1st annual Beaujolais and Turducken Weekend to produce an array of interesting items for thanksgiving, each of them based on the decadent Thanksgiving favorite turducken. Tennessee Avenue Beer Hall will have a Mole Enchilada with turkey, chicken, duck, queso and mole sauce prepared with MADE chocolate; a Three Little Birds Empandada with turkey, duck, chicken, sweet potatoes, stuffing, pan gravy and cranberry crema; and a Jambalaya made with Creole rice, bell peppers, turkey, duck and chicken. At The Iron Room and Rhythm & Spirits chef Kevin Cronin will serve Turducken Pizza with Marsala sauce, Swiss cheese, duck confit, roasted turkey, chicken, and truffle salt as well as a Turducken Shepherd’s Pie made with English peas, heirloom carrots, smoked paprika and potatoes robuchon. Over on New York Avenue, Bourre will offer as-yet-unannounced turducken specials as well. These specials will run from Thursday to Sunday, Nov. 21-24 only, so grab ’em while you can. MadeACChocolate.com; TheIronRoomAC.com; TennesseeAvenueBeerhall.com; RhythmAndSpiritsAC.com.

It may seem like a travesty to stop in at Jim’s Lunch and not order some of their amazing burgers, so we are not even going to suggest you do that. What we ARE going to suggest is that you broaden your horizons a bit, as this place serves all kinds of awesome comfort food, and some of it is pure Thanksgiving-on-a-plate. Go to Jim’s on a Friday, the only day of the week in which you can order their hot turkey sandwich. Or if you’re in the mood for a different fowl, try the awesome chicken croquettes. Pair either with sides of mashed potatoes and their incredible stuffing. And yeah, go ahead and throw in a burger on the side just for fun. You’ll thank us. Jim’s Lunch is located at 105 E. Main St. in Millville. Call 856-327-1299.

One thing that dawned on us when eating the all-vegan gobbler at Greens and Grains recently — Thanksgiving may not seem like it, but is actually a very vegetarian-vegan friendly holiday. Sure, you can’t eat the turkey, but most of the side dishes are all fair game (and everybody knows the sides are the best part of Thanksgiving anyway). Greens and Grains has put together an animal lover’s dream on a bun known as the Vegan Gobbl’r. It consists of a breaded faux-turkey breast topped with mashed potatoes, stuffing, cranberry sauce and a non-meat based gravy. Even for a meat eater this ain’t bad! Greens and Grains is located at 80 W. Jimmie Leeds Road in Galloway. Go to GreensAndGrainsUSA.com.

Turkey and stuffing (our faces) with leftovers at SJ restaurants

Thanksgiving is so close we can smell the turkey already. And that got us thinking - why should we force ourselves to wait until after the hol…