Could Miss America be returning to Atlantic City for the 100th anniversary? 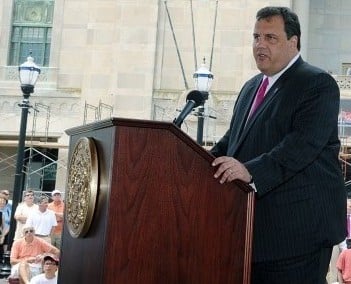 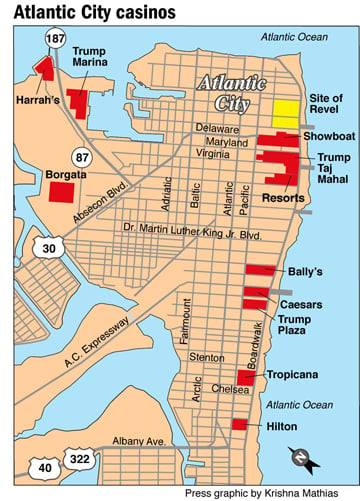 Gov. Chris Christie wants to see state control of a new Atlantic City tourism district within one year, he said Wednesday, as he announced a plan to remold the state’s gaming, sports and entertainment industries.

Christie discussed the first details of advisory commission proposals that would also create a new public-private partnership involving casino interests to market the resort. Many of the proposals will require legislative approval.

The governor first talked of the recommendations, which include rejecting slot machines at racetracks, Wednesday morning on the 50-yard line of the New Meadowlands Stadium in Bergen County.

“Atlantic City is dying,” he declared at the Meadowlands.

Onlookers broke into applause as Christie said he would make the city “safe and clean” and set a deadline of July 1, 2011, for creating a master plan for that purpose. Describing the state’s casino regulatory system as an “antique car,” he called for reducing regulation by the Division of Gaming Enforcement and Casino Control Commission. He also proposed to change the way the city is marketed and bring “certainty” to investors who were unsure if they should bring projects to the city.

Christie, flanked by advisory commission Chairman Jon F. Hanson, criticized Atlantic City government for wasteful spending that has hindered the resort in becoming a tourist destination and a desirable place to invest.

“Atlantic City has had a historically corrupt, ineffective, inefficient government,” he said. Those leaders, he said, had been “riding the crest of the gaming wave when we have a monopoly.” Now that Atlantic City faces competition from neighboring states, Christie said, “we have to create a new wave.”

City government had been given “fair warning” following a recent state audit that it should “get its act together” or face state oversight, he said.

“We are here to partner in success. We are not here to subsidize failure,” Christie said. The subsidizing of racetracks by casinos would end, he said, while the debt-ridden state Sports and Exposition Authority would “have to get out of the business of running things.”

Atlantic City government likewise would not be left to preside over the death of the resort, he said. He told both the northern and southern audiences who asked about the speedy agenda, “Delay will lead to demise.”

The morbid language did not faze Mayor Lorenzo Langford, who left the event confident that Atlantic City would benefit from the state’s involvement.

“What I heard was a theme of collaboration, participation and cooperation,” the mayor said.

Casino supporters were happy to see the report call for putting off any expansion of casino gaming beyond Atlantic City. Racetrack supporters had hoped to see slot machines allowed at the Meadowlands and other tracks. Instead, the report proposed closing or selling the Meadowlands facility.

Christie hopes to prioritize using casino tax revenue to fund Atlantic City’s blighted areas. He said he doesn’t expect the proposed changes to affect the tax structure for Atlantic City’s casinos. But gaming enforcement, which is funded by the casinos, would be streamlined, he said, perhaps following the Las Vegas model of bringing the Division of Gaming Enforcement under the Casino Control Commission.

A new Atlantic City Tourism District would operate in a “private-public partnership” and casino companies and future investors would be expected to provide significant funds for the partnership. The Governor’s Office refused to release a map or to detail the boundaries of the proposed zone Wednesday.

The entity would also absorb the duties of the Atlantic City Convention and Visitors Authority, which manages the city’s Convention Center and Boardwalk Hall. Christie criticized the ACCVA for having high salaries.

“Anyone who walks the Atlantic City Boardwalk for five minutes would come to the same conclusions that it took this commission six months of closed-door meetings to reach,” Sweeney said.

Sweeney said the report makes the need for a gaming summit that legislative Democrats are planning “all the more vital and pressing.” He said the summit would use Christie’s report as a baseline for discussions, but would also deal with the more detailed economic and market-based issues the gaming industry needs to confront in creating a vision for long-term viability.

“Improving New Jersey’s gaming and entertainment industry means more than just cleaning the streets and slapping on some paint. It means bringing new products into the market that will attract visitors and beat back the steady stream of new competitors. It means creating jobs and welcoming businesses. This report only goes half way.”

The commission also focused on the state of Revel Entertainment Group’s unfinished megaresort in the city’s South Inlet. The property was part of a small collection of initiatives the state hopes to tackle immediately, including identifying “a catalyst” to monitor progress at the stalled construction site and to recommend further state involvement.

Revel all but shut down construction of its $2.5 billion casino project this spring after the upstart company failed to obtain financing for its interior development. Investment giant Morgan Stanley bailed out of the project soon after, reporting more than $900 million in losses from its investment in the project.

Christie has already shown his support for the project, which many have said is instrumental to the future success of the resort, by signing legislation that would potentially supply more than $300 million in future state sales taxes to be infused in the infrastructure around the site.

The report did not make specific suggestions about additional state involvement.

On the Xanadu development in the Meadowlands, Christie said, “Make it work or tear it down.”

Here is a copy of "Report of the Governor's Advisory Commission On New Jersey Gaming, Sports…

Create a “Clean and Safe” Tourism District by July 1, 2011. Create a Master Plan for the To…

Members of the Governor's Advisory Commission on New Jersey Gaming, Sports and Entertainment

Members of the Governor’s Advisory Commission on New Jersey Gaming, Sports and Entertainment

Support and criticism for the proposed Atlantic City takeover plan

SECTION V: IMPROVEMENT OF THE COMPETITIVENESS OF THE GAMING INDUSTRY

No video lottery terminals at Meadowlands — at least for now

ATLANTIC CITY — VLTs are DOA — at least for now.

Why the state stepped in in Atlantic City

The reasons cited by the state include:

Gaming industry welcomes Atlantic City plan, but others skeptical that NJ can do it better

ATLANTIC CITY - Gov. Chris Christie's plan for state oversight of the casino district should boost the gaming industry, but it could take much…

ATLANTIC CITY - Once held up as a national model, New Jersey's casino regulations are now being compared to an "antique car" by the man who wa…

On Wednesday, Gov. Chris Christie spoke at the New Meadowlands Stadium in East Rutherford, Bergen County, and on the Boardwalk in Atlantic Cit…

Gov. Christie gets an earful as Atlantic City leaders ask: What next?

With "conceptual" maps of casino & entertainment zones from governor's office

ATLANTIC CITY — As the state orchestrates an unprecedented intervention in Atlantic City’s casino industry and government, Atlantic County off…

Senate Democrats propose their own Atlantic City plan, including state-oversight of casino zone

What do you think of the plan? Take a poll

History of Casinos in Atlantic City