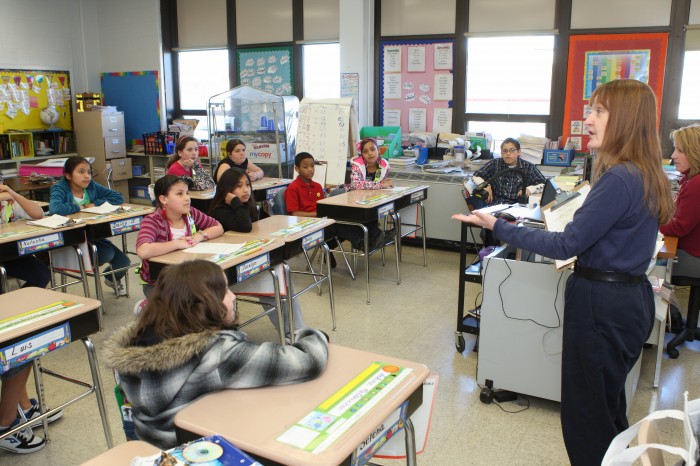 Gayle Stahlhuth, of the East Lynne Theater Company, addressed the fifth-grade class at Glenwood Avenue Elementary School. The class is using President Barack Obama’s book ‘Of Thee I Sing’ as a guide to learning about famous Americans. Stahlhuth and Patti Chambers are helping students to research, write and rehearse scenes for their March 10 show. 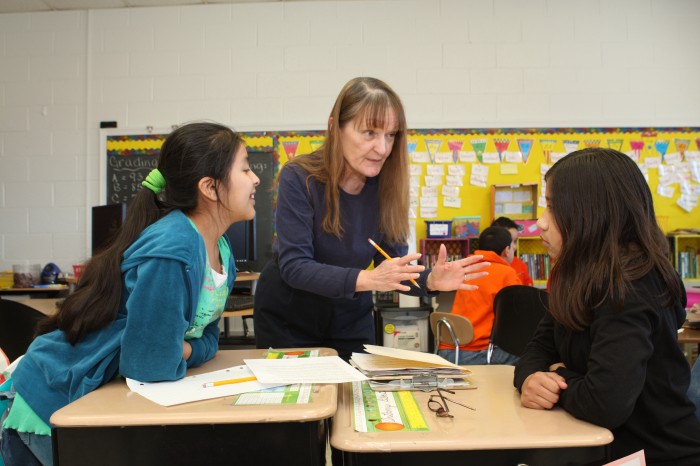 Daisy Jimenez, 11, and Daisy Salmoran, 11, got advice from Gayle Stahlhuth about their play. 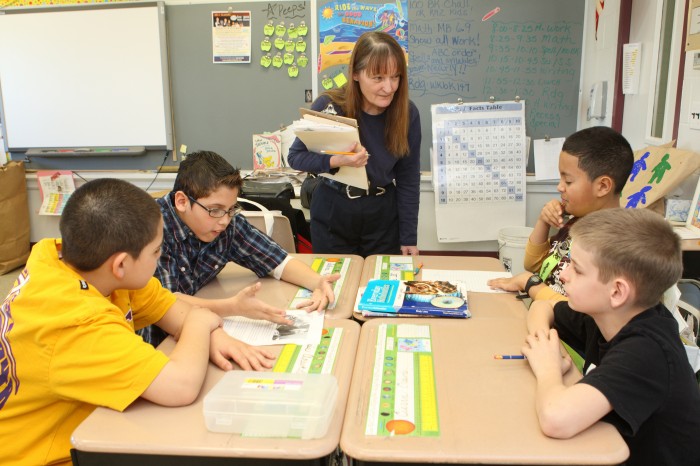 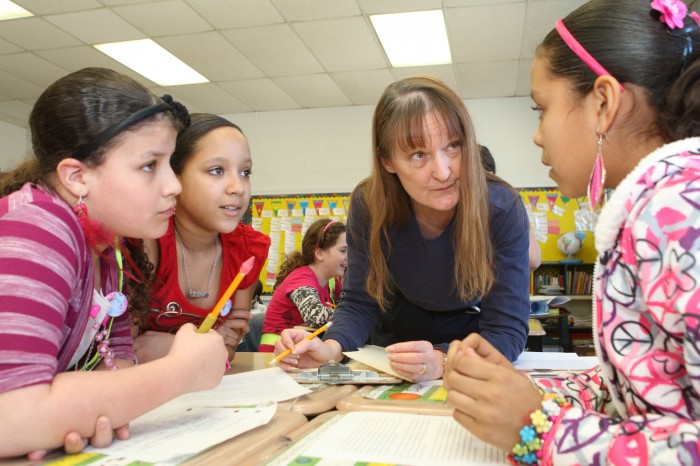 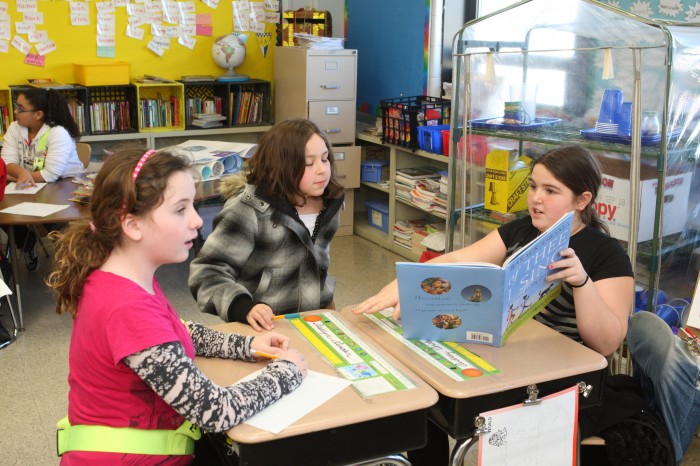 From left, Shaelyn Linden, 10, Selena McCarraher, 10, and Audrey Corodero, 10, discussed their plans for their play.
1 of 5

Gayle Stahlhuth, of the East Lynne Theater Company, addressed the fifth-grade class at Glenwood Avenue Elementary School. The class is using President Barack Obama’s book ‘Of Thee I Sing’ as a guide to learning about famous Americans. Stahlhuth and Patti Chambers are helping students to research, write and rehearse scenes for their March 10 show.

Daisy Jimenez, 11, and Daisy Salmoran, 11, got advice from Gayle Stahlhuth about their play.

From left, Shaelyn Linden, 10, Selena McCarraher, 10, and Audrey Corodero, 10, discussed their plans for their play.

Gayle Stahlhuth, the artistic director of the East Lynne Theater Company in Cape May, has spent her career immersed in professional theater.

Since the early 1970s, Stahlhuth has appeared off Broadway, in national tours, in regional theaters, television and radio, and also has been a playwright, producer and director.

On March 1, she went back to school - the Glenwood Avenue Elementary School in Wildwood, where she is spending six days with the school's fifth-graders.

As a part of the ELTC professional equity theater's educational outreach initiatives, which Stahlhuth wholeheartedly supports, she is conducting a six-session in-school playwriting residency with Glenwood students.

Stahlhuth has conducted such residencies in New Jersey, New York, Wyoming and Utah since 2000, but has never worked with the Wildwood school before.

After acquiring a $2,000 grant from the Target department store company to fund the education programs, Stahlhuth contacted the school and asked if she could come share some theatrical magic with students.

"The hardest part is convincing the school that they don't have to pay a dime. I simply want to come in and share what I have to offer with their youth," Stahlhuth said. "The arts give students a sense of self-assurance, a feeling of community and confidence, a deeper sense of history. That's the sad thing about so much of the arts being taken away from schools."

Music and art and dance are a part of our culture, she said. When students embrace the arts in the classroom, they learn skills they can't acquire from a textbook or computer.

"The arts spill into all other aspects of learning by opening the imagination and forcing kids to think outside the box," Stahlhuth said. "A life without an imagination would be a pretty sad life."

On March 3, Stahlhuth spent a portion of the day with each of Glenwood Avenue's fifth-grade classes. The students are creating scripts based on famous Americans they have learned about in class through reading President Barack Obama's book "Of Thee I Sing."

The students will break up into small groups, with each group choosing a famous figure. After six days of playwriting and acting exercises, class discussions, research, staging and rehearsals, the students will perform before their peers.

Walking throughout the classroom table to table to check and chat with the small groups, Stahlhuth offered scriptwriting advice, sneaking in theater terminology and historical facts.

Stopping at a table of four boys working on an Albert Einstein skit, she suggested the use of a Princeton University setting, where Einstein was a professor.

"Where is Princeton located?" asked Jovann Rodriguez, 11, of Wildwood.

"New Jersey," Stahlhuth responded, handing the boys a printout of Einstein's biography. On the top of the print out was a photograph of the famous scientist.

Gathering around the photo, the boys concluded that group member Anthony Gilbert, 11, of Wildwood, should play the role.

"That's him. Doesn't Anthony kind of look like him?" Jovann said, looking from the black-and-white printout of the white haired, mustached old man to the blond 11-year-old boy. "And Anthony's really smart, and this guy is smart, too."

Anthony smiled in approval, happy to take the leading role.

At another table, a group of three girls had a dictionary open, one running her index finger down the 'D' page in search of the word "dialogue."

The majority of the class speaks Spanish, teacher Betsy Heraux said, so vocabulary and public speaking can be a struggle. This program is pushing them to expand their vocabulary and speak in front of a crowd, she said.

At the end of Stahlhuth's March 3 session, Heraux asked whether any group would like to stand before their classmates and share their scripts thus far.

Every hand went up.

"They're discovering how to use new talents," Heraux said.