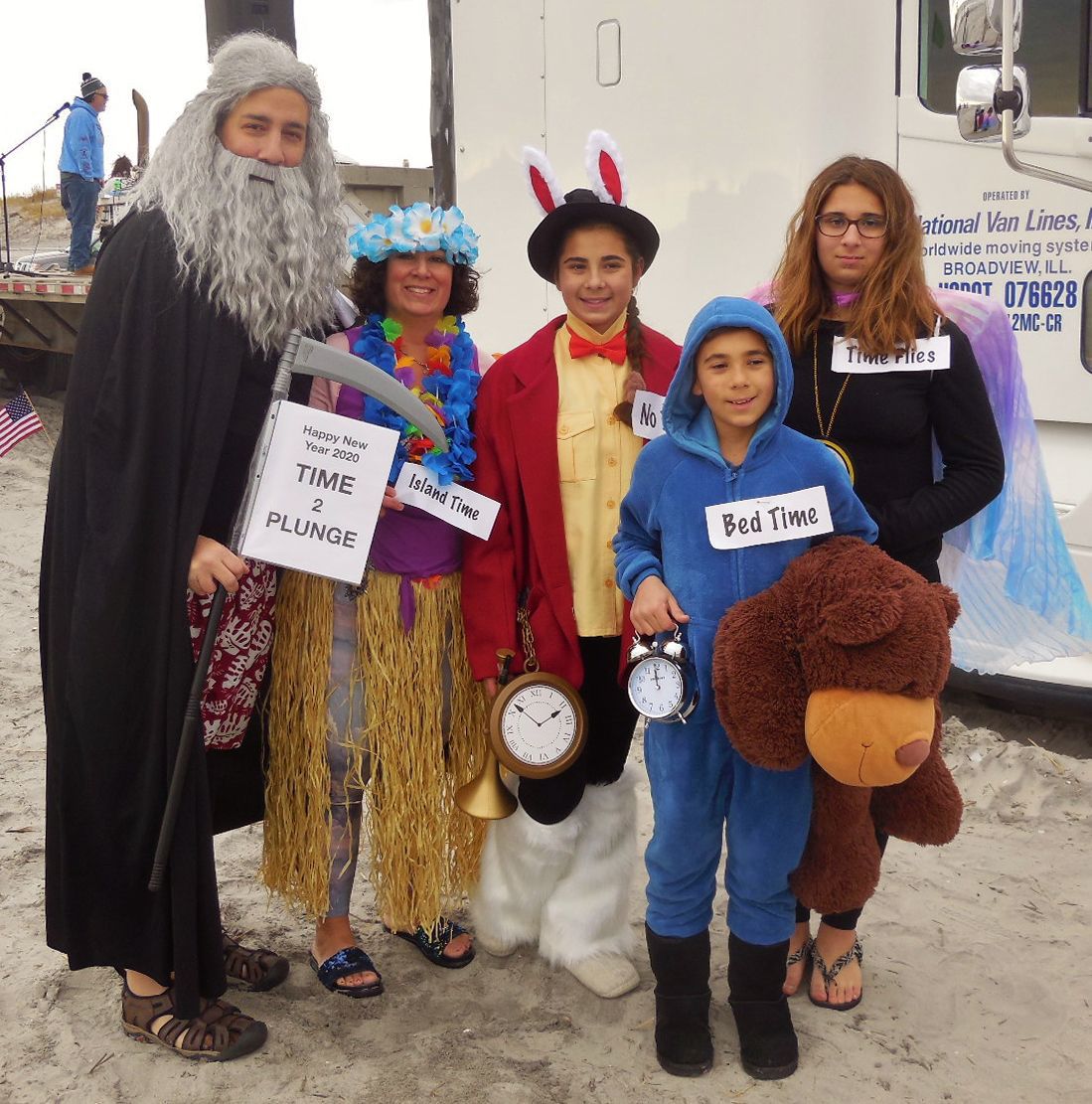 Paul, Kira, Gwen, Eve and Vaughn Amalfitano have been taking part in the plunge for the last five years, and always come up with creative costume themes. 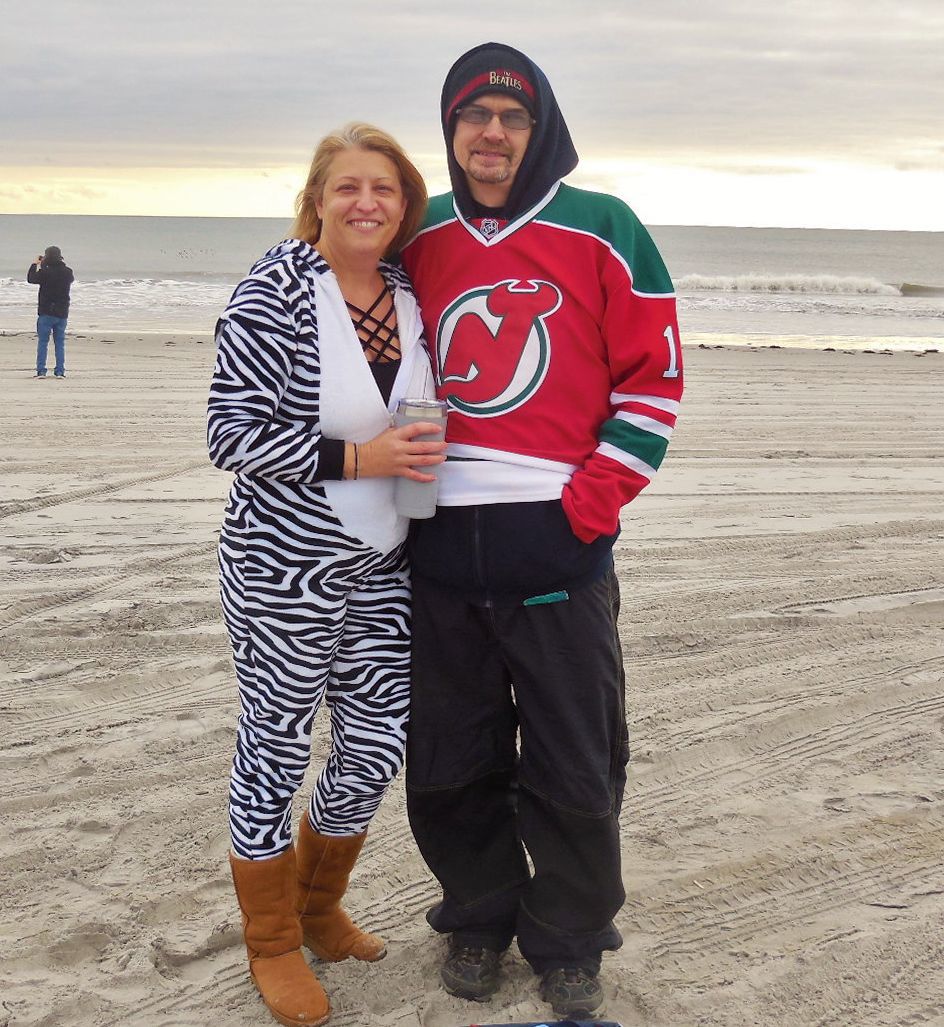 Cosima and Patrick Hilliard came from Egg Harbor City to do the plunge for the 10th year. 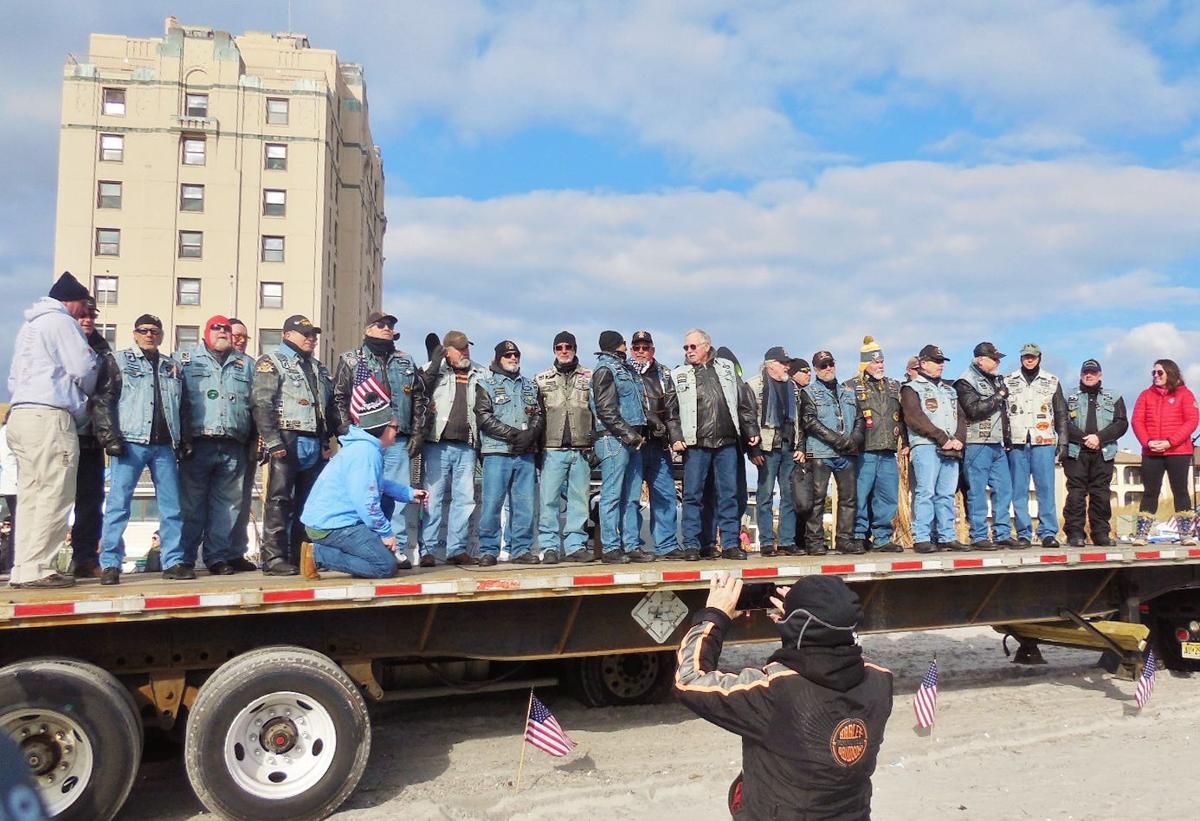 A total of 28 Legion Riders took to the stage during their check presentation. 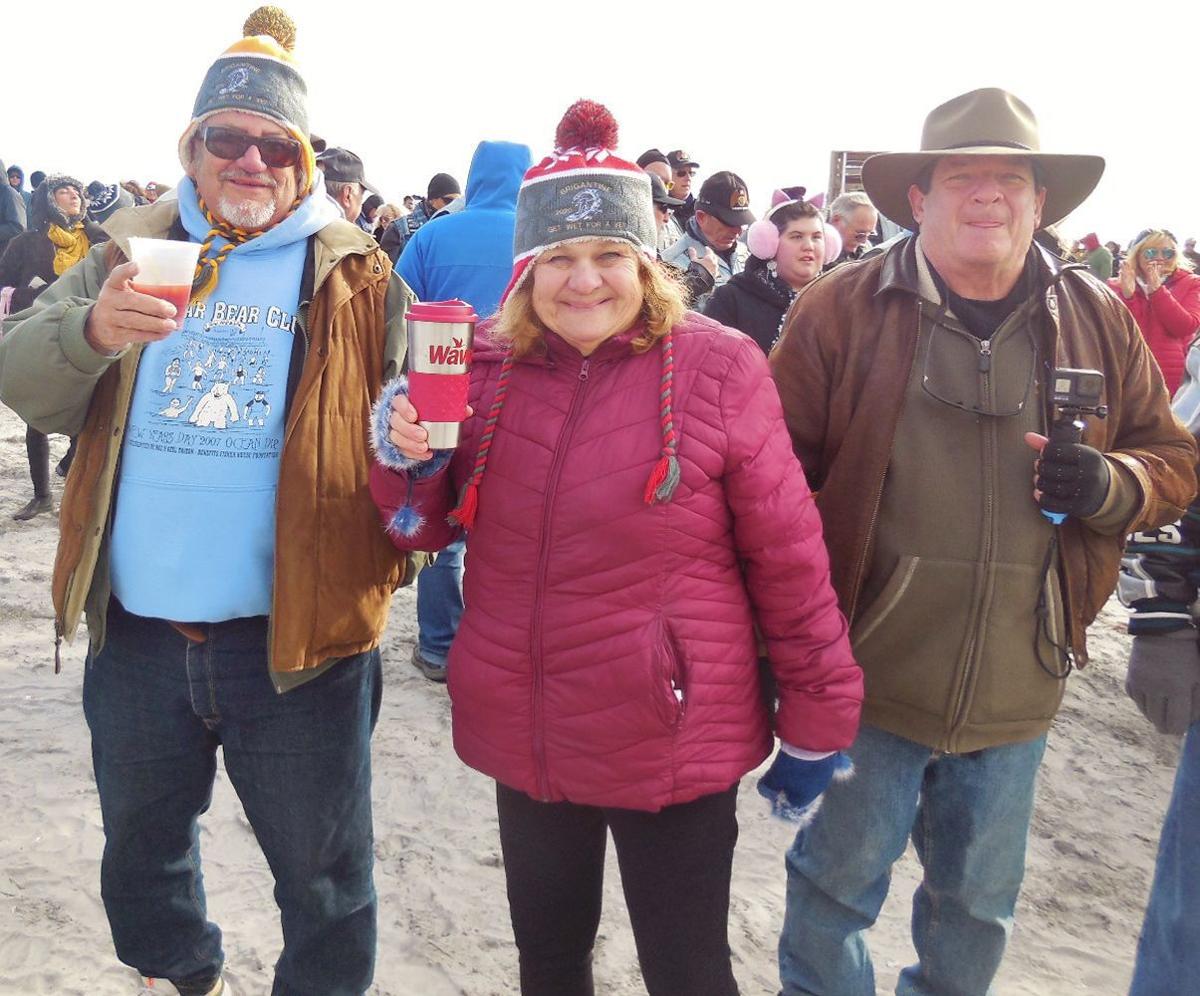 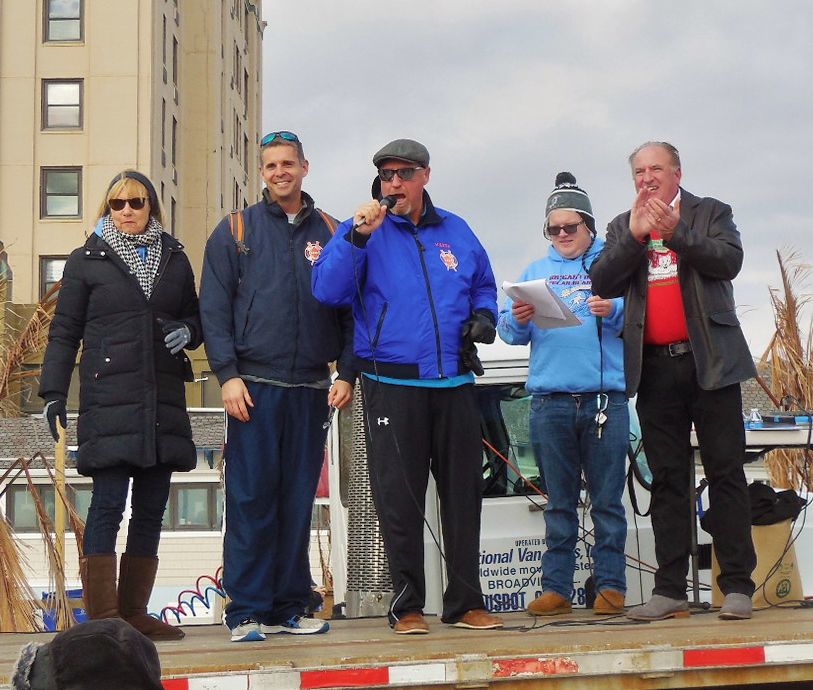 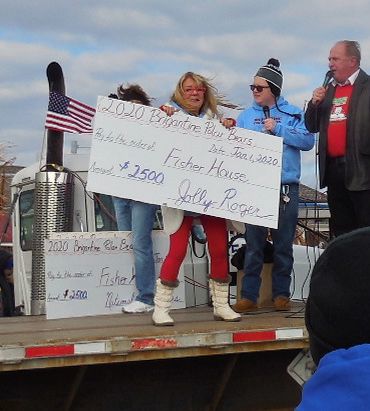 Brigantine's Jolly Roger Marina was one of the major contributors of $2,500. 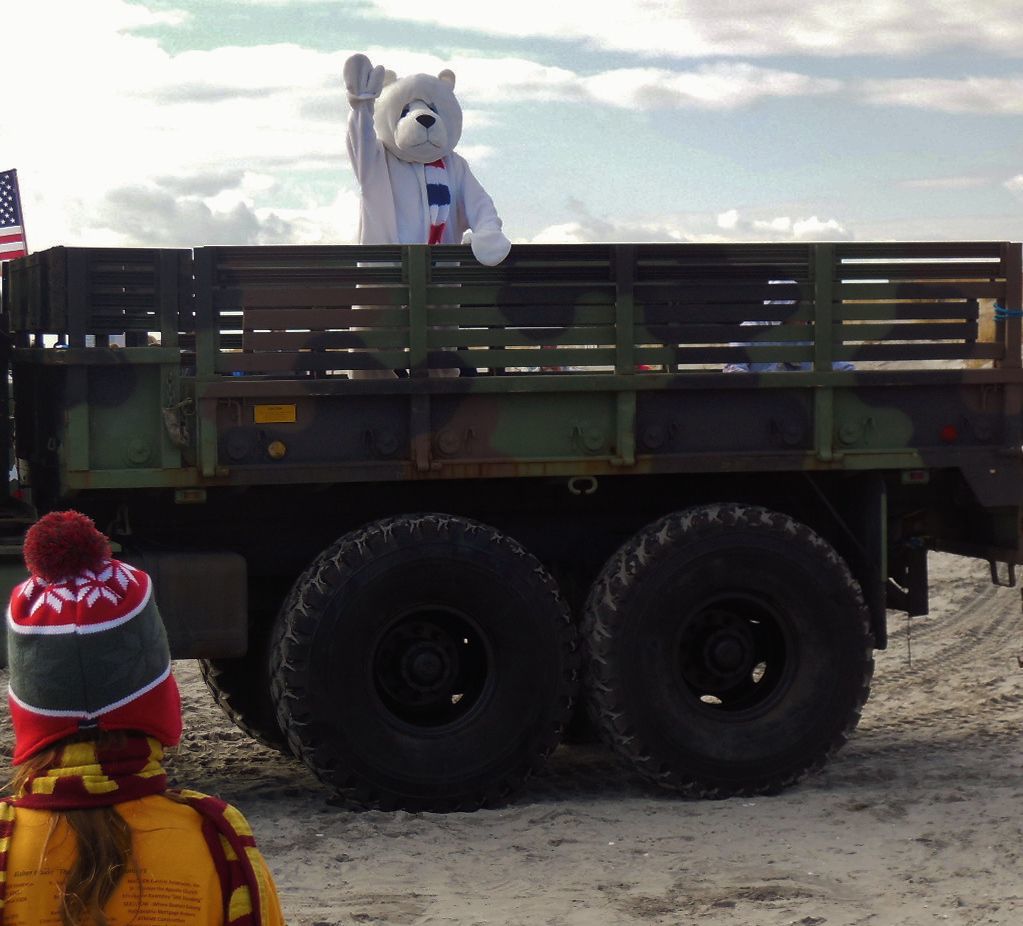 The Brigantine Polar Bear made its grand entrance on a military transport truck. 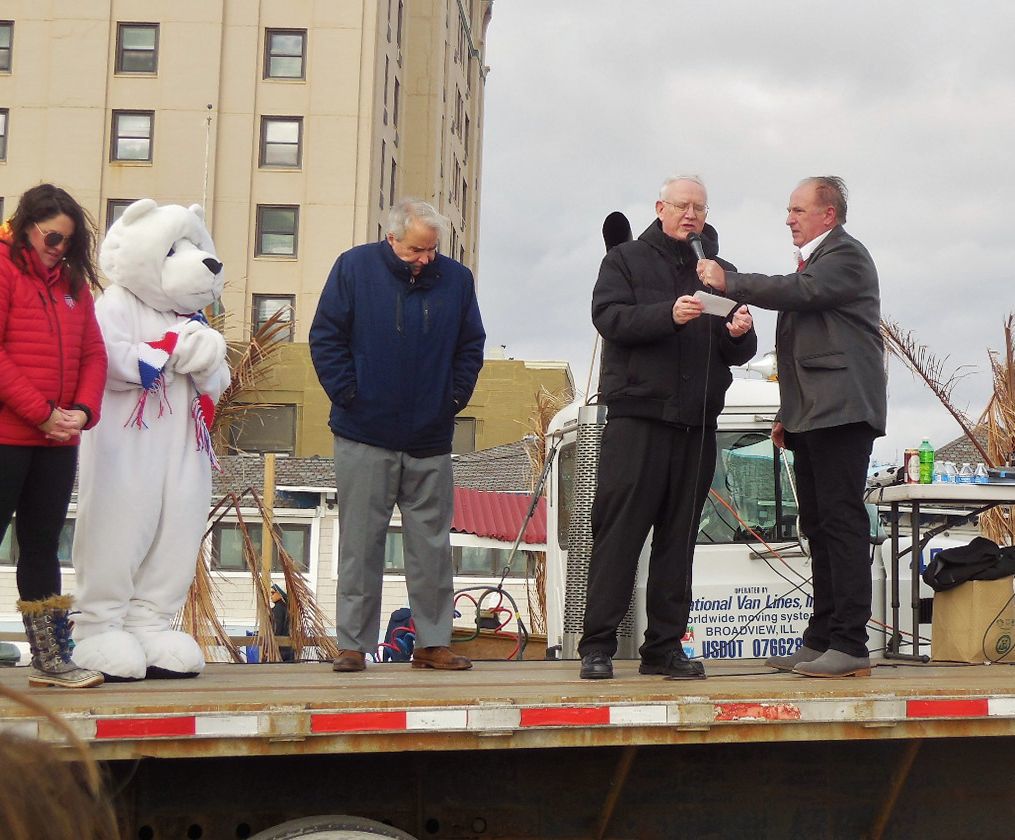 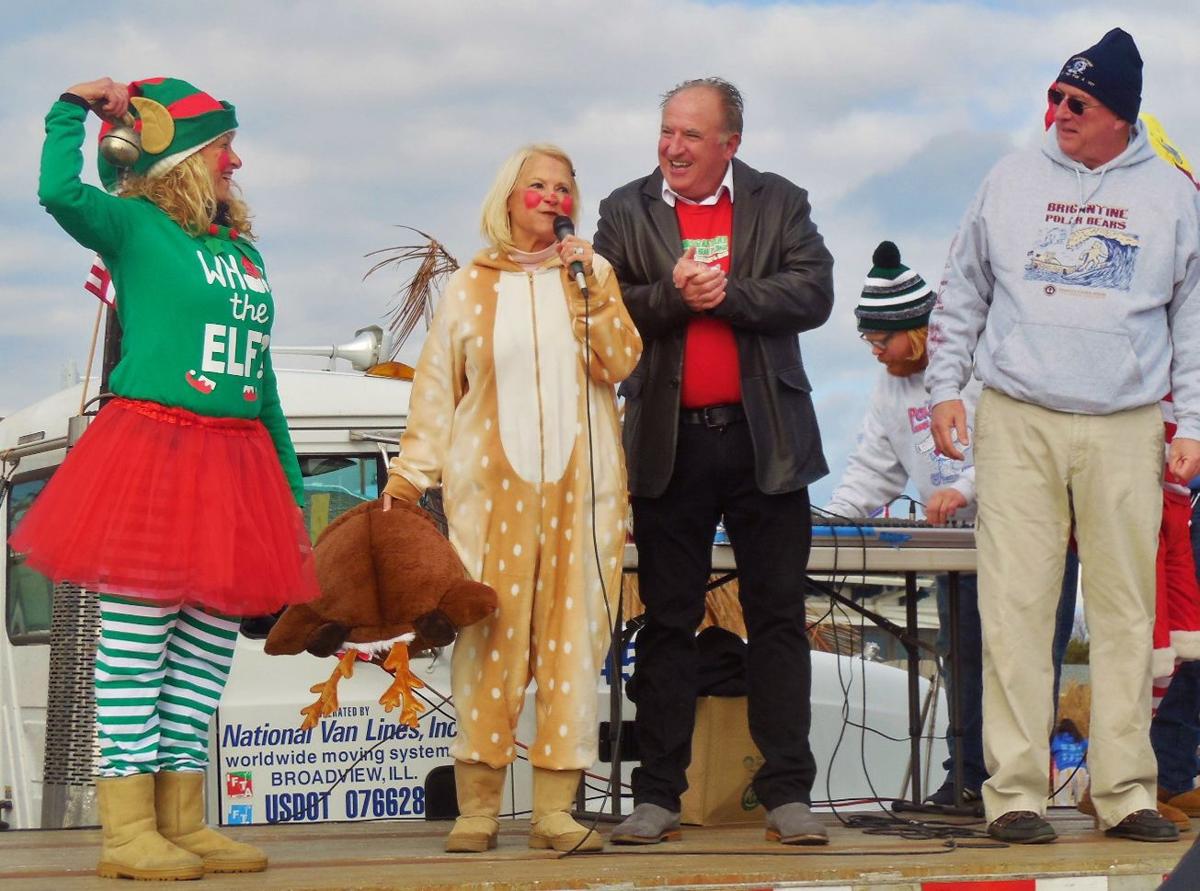 Karen Geller and the Zumba Chicks all chipped in to contribute $2,000. 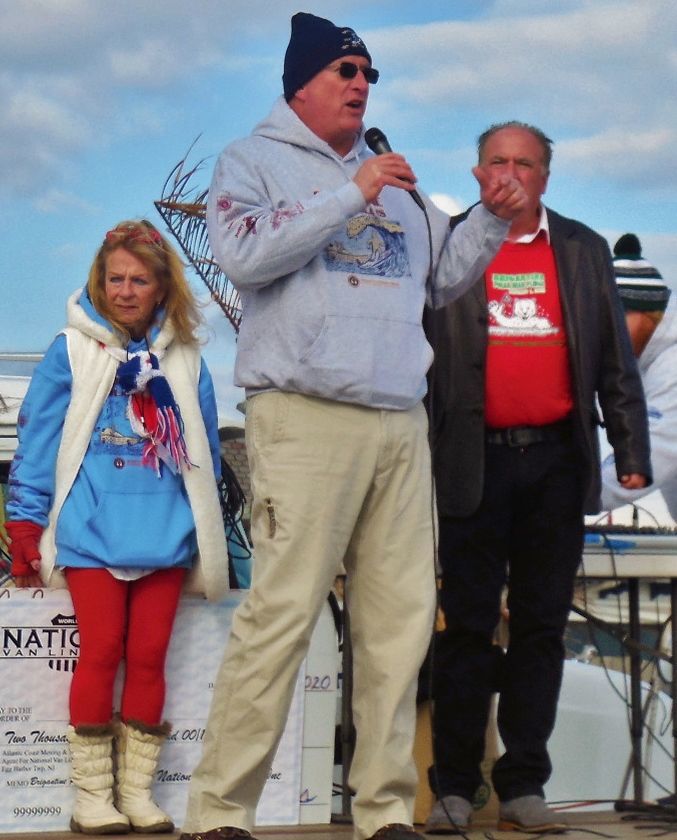 Paul, Kira, Gwen, Eve and Vaughn Amalfitano have been taking part in the plunge for the last five years, and always come up with creative costume themes.

Cosima and Patrick Hilliard came from Egg Harbor City to do the plunge for the 10th year.

A total of 28 Legion Riders took to the stage during their check presentation.

Brigantine's Jolly Roger Marina was one of the major contributors of $2,500.

The Brigantine Polar Bear made its grand entrance on a military transport truck.

Karen Geller and the Zumba Chicks all chipped in to contribute $2,000.

The new year again kicked off with the biggest public party Brigantine plays host to — the annual Polar Bear Plunge — where for the 20th year thousands of people carried out various roles in raising tens of thousands of dollars for the Fisher House Foundation.

Under the leadership of event organizer Tricia Cosgrove and her legion of fellow volunteers, the plunge has raised more than $600,000 since making Fisher House its primary beneficiary about 15 years ago. Thousands of people line the beaches around the party's 14th Street South headquarters, and hundreds of them — many dressed in elaborate costumes created specifically for the event — dive into the icy brine of the Atlantic Ocean when a cannon blast signals noon.

“My staff told me that if I wanted to be one of the cool people, this is where I needed to be today,” said David Coker, president of Fisher House since 1994, during a preplunge ceremony recognizing all of the event's major sponsors.

Coker has become a fixture at the Brigantine event, touting it as one of the biggest single-day fundraisers the nonprofit organization benefits from year to year. Fisher House provides housing and transportation to wounded military members and their families year-round. The Brigantine Polar Bears support the organization through private donations, local business and national corporate sponsorships, merchandise sales and proceeds from a post-plunge party hosted at Laguna Grill & Rum Bar.

“When this (Brigantine Polar Plunge) first started, we had in the neighborhood of 30 houses,” Coker said. “Today there are 86, and this year we'll be helping over 33,000 families. And we can do that because we have the support of communties like this. For that we are eternally grateful.”

Each Fisher House location is either on the site of, or very close to, a military medical center or Veterans Administration hospital. The homes are built and donated by Fisher House, and operated by medical staff of either the VA or the U.S. Department of Defense. Any family member of a wounded veteran can stay at a Fisher House location free of charge.

“I know I've said this before, and I love to say it every year because it's so true,” said Fisher House Chief of Staff Mary Considine, during the pre-plunge ceremony. “There is no other event anywhere in the world like this that happens for Fisher House. It's one of a kind, and one of our favorite places to be every year.”

The family that freezes together

Brigantine physical therapy specialist Paul Amalfitano and his family are well known for their creative plunge costumes over the past five years. This year's Amalfitano family theme was “Time to Plunge,” in which the patriarch was decked out as Father Time and his wife, Kira, children Gwen, Eve and Vaughn, and other family members wore such get-ups as Bed Time, Time Is On My Side, Time 2 Make the Donuts, Military Time, Island Time, No Time and Time Flies.

“We started doing it just to be part of the community,” Paul Amalfitano said. “We love the fact that it supports Fisher House and the military. My two brothers-in-law are military, so anything to support the military, and besides that it's just a really fun family and community event to be part of.

“We love having fun, letting everybody smile and starting off the year right,” he added. “It's become a family thing everybody looks forward to. They don't let me tell them what to wear for Halloween, but during the plunge, we all agree on a common theme.”

Not everyone who takes the plunge lives on the island. Cosima and Patrick Hilliard have headed east from Egg Harbor City to take part for the past 10 years.

“My girlfriend made me do it in 2010, and we've been doing it ever since,” said Cosima Hilliard, adding that she and her husband were off to the Mummers Parade in Philadelphia right after taking the plunge. “It's a fun way to wash off the old year and bring in the new. And the fact that all the money goes to veterans is fantastic. We love being a part of it.”

Recognizing the need for military support

Dick Scafa, eastern regional director for National Van Lines, is another fixture at the Brigantine Polar Bear Plunge, and the company he represents is consistently among the top-level sponsors contributing $2,500 to the cause each year.

Scafa is frequently reminded of the sacrifices military members make when discussing the Brigantine Polar Plunge in casual conversation.

“I met a guy recently and mentioned that I do the polar plunge every year, and he told me he always wanted to do that,” Scafa said. “And then he got to thinking, and said, 'You know, I've been in the military for 20 years, and have probably done between five and 10 polar plunges over that stretch — and none of them were planned.'

“So let's all thank our vets every day.”

Another of the event's major annual sponsors is a group whose primary mission is helping veterans year-round – the Legion Riders of Somers Point Post 352. Third-year Riders President Mike Merlino presented this year's $2,500 check to the Polar Bear committee.

“It's very easy to support an organization that does so much for our veterans in uniform, and more importantly their families,” said Merlino, who grew up in Ventnor and now lives in Scullville. “Thank you Brigantine Polar Bears, and thank you Fisher House Foundation.”

Many of the Legion Riders are past members of the military themselves, although that is not a mandatory qualification to join the Riders' cause. Also eligible are members of the Sons of the American Legion — or those who are direct descendants of men and women who served in the U.S. Armed Forces.

Merlino is one of the Sons of the American Legion, as is longtime Brigantine resident Don Landry, who first suggested to event co-creator Augie Peltonen that the Fisher House Foundation be the sole beneficiary of the Brigantine Polar Bear Plunge 15 years ago.

“That's what we're all committed to doing, helping veterans and their families in need, whether it's through military funeral escorts, welcome-home ceremonies for veterans who were serving overseas, or assisting in fundraisers for charities like this,” said Landry, whose father and brother were veterans of the U.S. Army. “That's true for both the veterans in the group and the Sons of the American Legion.

“For me personally, as a member of the Sons, I look at this as my way of giving back; my way to serve even though I wasn't in the service. And we're particularly proud to be part of this event. Fisher House Foundation is one of the top-rated charities in the world.”

Those interested in donating to the cause can write a check to "Fisher House" and mail to Brigantine Polar Bears, P.O. Box 1133, Brigantine NJ 08203.