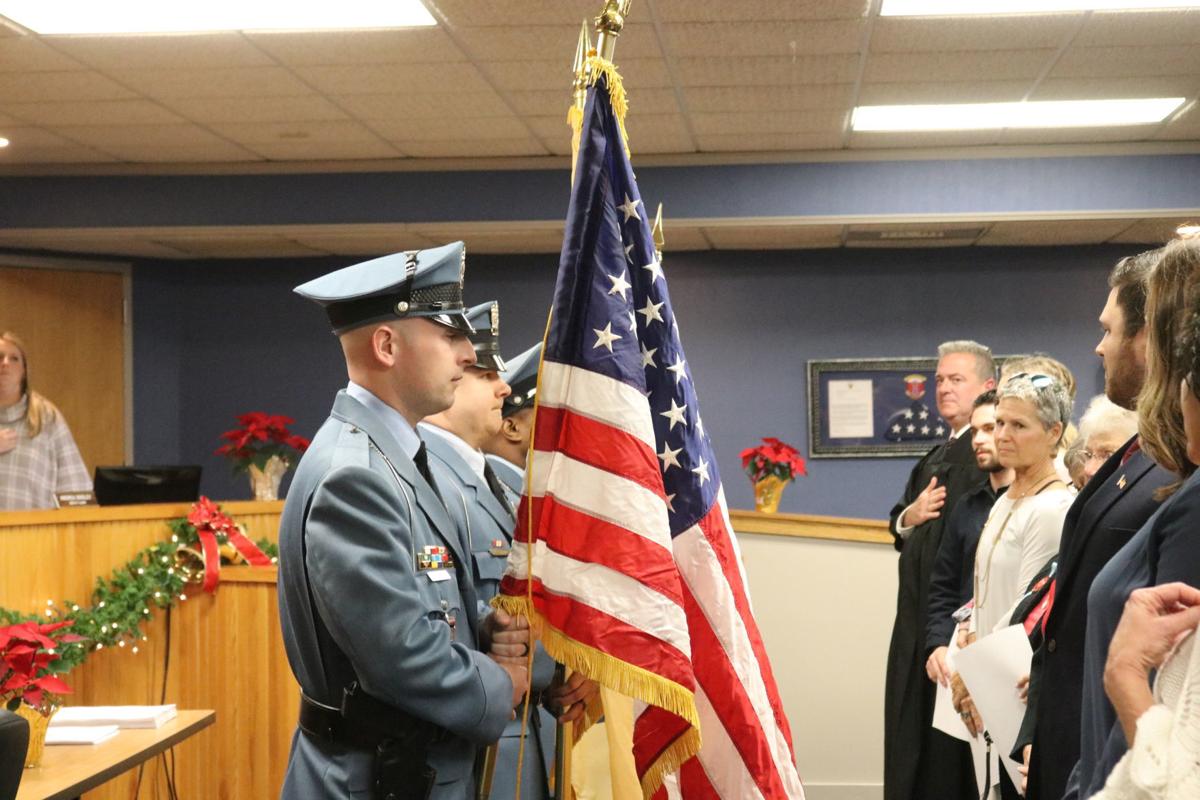 An honor guard of Middle Township police officers presented the flag for the Pledge of Allegiance at the Jan. 6 Township Committee meeting. 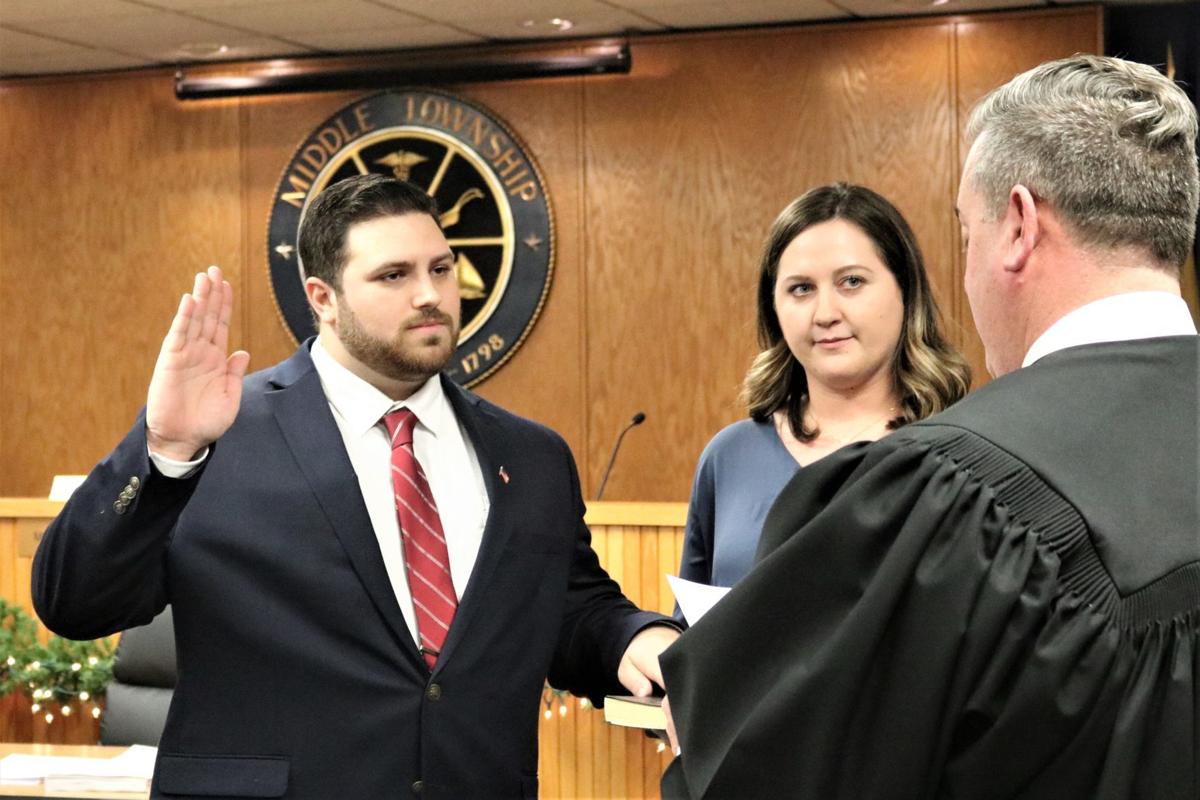 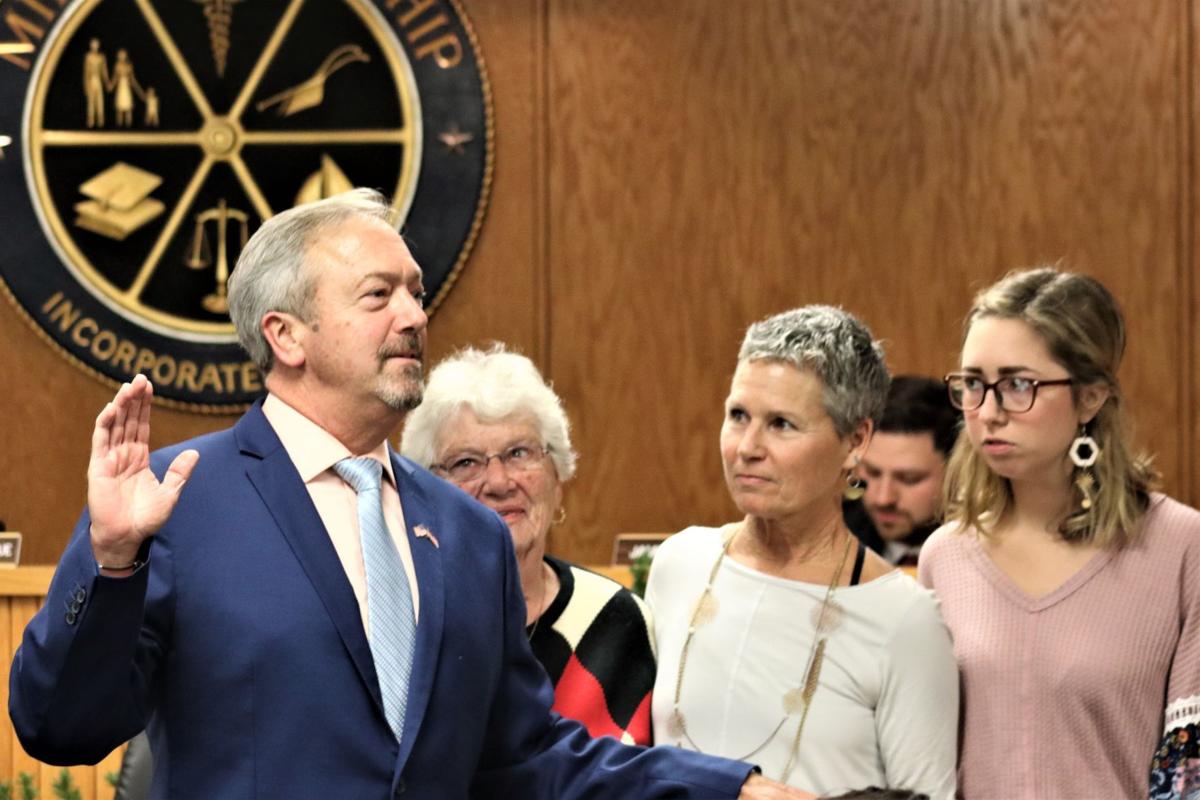 Tim Donohue takes the oath of office as the mayor of Middle Township for 2020 at the Jan. 6 Township Committee reorganization meeting. He is joined by (from left) his mother, Lenore Donohue, his wife, Carole Donohue and his daughter Juliana Donohue.

An honor guard of Middle Township police officers presented the flag for the Pledge of Allegiance at the Jan. 6 Township Committee meeting.

Tim Donohue takes the oath of office as the mayor of Middle Township for 2020 at the Jan. 6 Township Committee reorganization meeting. He is joined by (from left) his mother, Lenore Donohue, his wife, Carole Donohue and his daughter Juliana Donohue.

MIDDLE TOWNSHIP — For the first time in memory, the three-member Middle Township Committee is entirely Republican, with the swearing in of new Committeeman James Norris on Monday, Jan. 6.

Norris beat out incumbent Democrat Mike Clark in November, completing a slow change in a township that Democrats ruled for decades. What began 10 years ago, when Dan Lockwood won a seat on the board in 2009, continued with the election of Tim Donohue in 2011, giving the GOP the majority in Middle after a generation of Democratic majorities.

At the reorganization meeting Monday, the committee unanimously returned Donohue to the mayor’s seat. In the township form of government, the committee members decide who will serve as mayor each year.

Committee members promised to work to avoid a tax rate as they begin the budget process for 2020.

The mood was celebratory, with the meeting unfolding with extra ceremony before a meeting room packed with family members, supporters and elected officials from throughout the area, including the two assemblymen-elect set to take office in Trenton Jan. 14, Lower Township Mayor Erik Simonsen and Ocean City Councilman Antwan McClellan.

An honor guard of Middle Township police officers brought in the American flag for the Pledge of Allegiance, followed by an invocation presented by Rev. Joseph Wallace, the pastor of Notre Dame De La Mer Roman Catholic parish in the Wildwoods.

“It’s not a funeral, folks. You can clap,” Donohue said after Norris’ name was announced.

Superior Court Judge Michael Donohue, the mayor’s brother, administered the oath of office to Norris, who was joined by his wife, Kasia, who held the Bible.

The two married in October, in the midst of his political campaign. On Monday, and in previous interviews, Norris thanked her for handling the wedding planning while he campaigned for office. He also thanked his family and friends for their work and the money donated to his campaign.

Norris, 28, served two years on the Middle Township Board of Education before running for Township Committee.

“I have dreamed of this moment since I first announced my candidacy,” Norris said. “It is almost exactly as I dreamed it. The only difference is in my dreams I was about 30 pounds lighter than I am right now. I blame that on the holidays.”

Donohue said it was his ninth reorganization as an elected official.

“It never gets old, no matter which party’s in control or who won or who lost,” Donohue said. “We sometimes take for granted that we are truly blessed to live in a country where we have free and fair elections, and those elections are and should be respected, and we have a peaceful transfer of power that is enshrined as a right of our citizens and the duty of our elected officials.”

He said the day was not about politics, but instead was to honor the people who worked hard for the township.

Donohue and Norris praised Lockwood, who attended the meeting, describing him as a key figure in moving the township to a Republican majority. Norris described him as the reason the current committee members were in their seats.

Committeeman Ike Gandy said Donohue talked him out of wearing a large, black silk top hat for the meeting. With a handlebar mustache grown this year, Donohue joked that he would look like Snidely Whiplash, a cartoon villain.

Donohue said the committee members like to joke around, but are serious about the township’s business.

“We don’t forget why we’re here. We don’t own these seats. They’re yours. You put your trust in us,” he said. “I want to thank you for allowing me to be your mayor. I’m looking forward to another year of service.”

He said Township Committee has accomplished a lot in the past year, with more on the horizon, pointing to projects underway in Rio Grande and the reconstruction of the Avalon Manor fishing pier, as well as a county project revitalizing the former Kmart shopping plaza near the intersection of routes 9 and 47, along with an agreement to bring water service to the Del Haven section of the township.

Donohue also praised Kimberly Krauss, the township clerk who was also named township administrator last year, part of a restructuring undertaken at Township Hall. He described the decision of 12 months ago as the most important the committee made.

“This reorganization has saved the town tens of thousands of dollars. There were some that doubted it; there was a lot of criticism a year ago. But the process has resulted in better municipal government,” Donohue said.