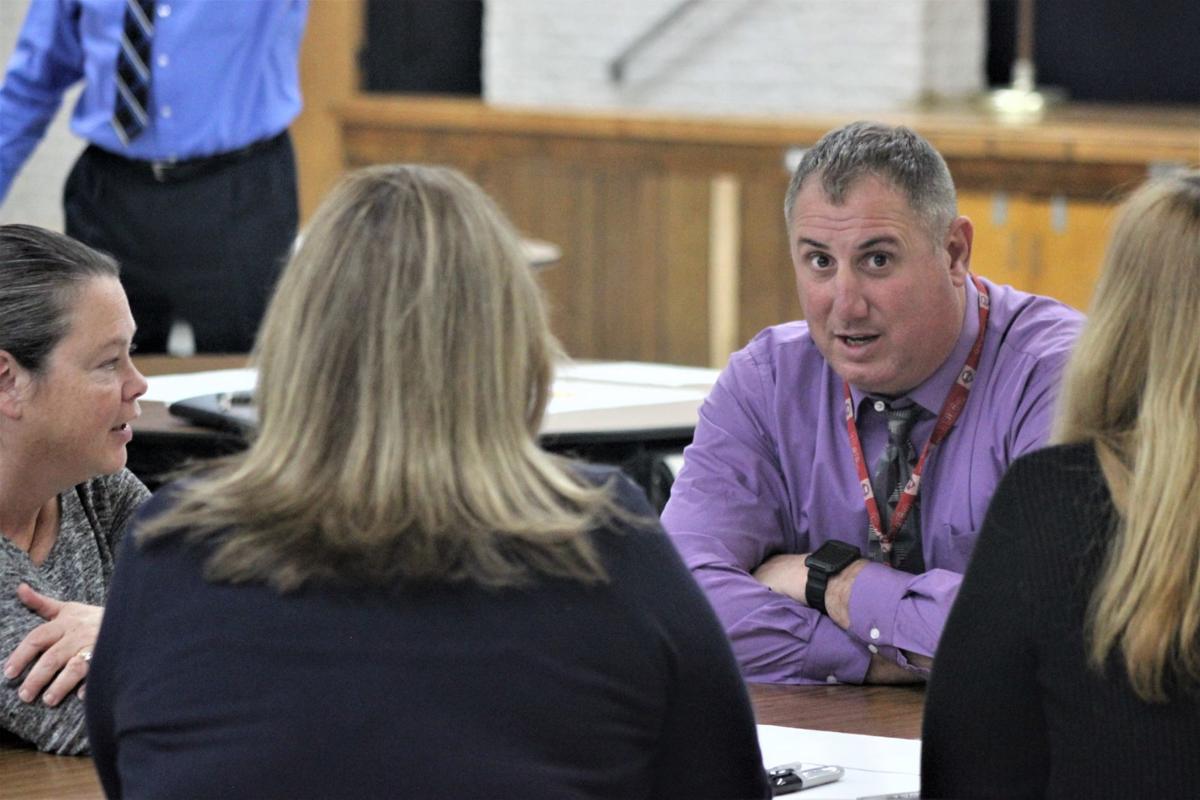 David Salvo, the township’s superintendent of schools, works with members of the public at the first of three planned public meetings on creating a five-year strategic plan for the school district. 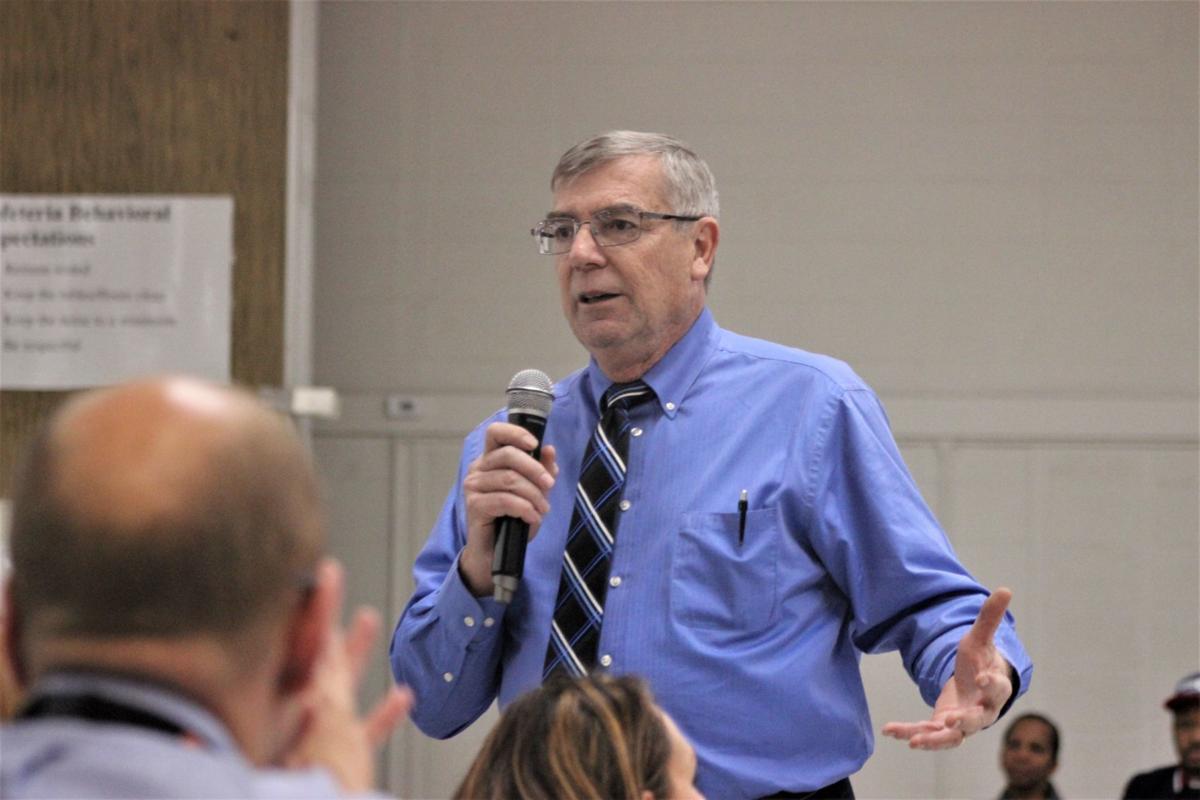 Education consultant Jerry Woehr says the school district wants input from as many community members as possible. He said at a recent meeting that the entire community has an interest in the quality of the schools. 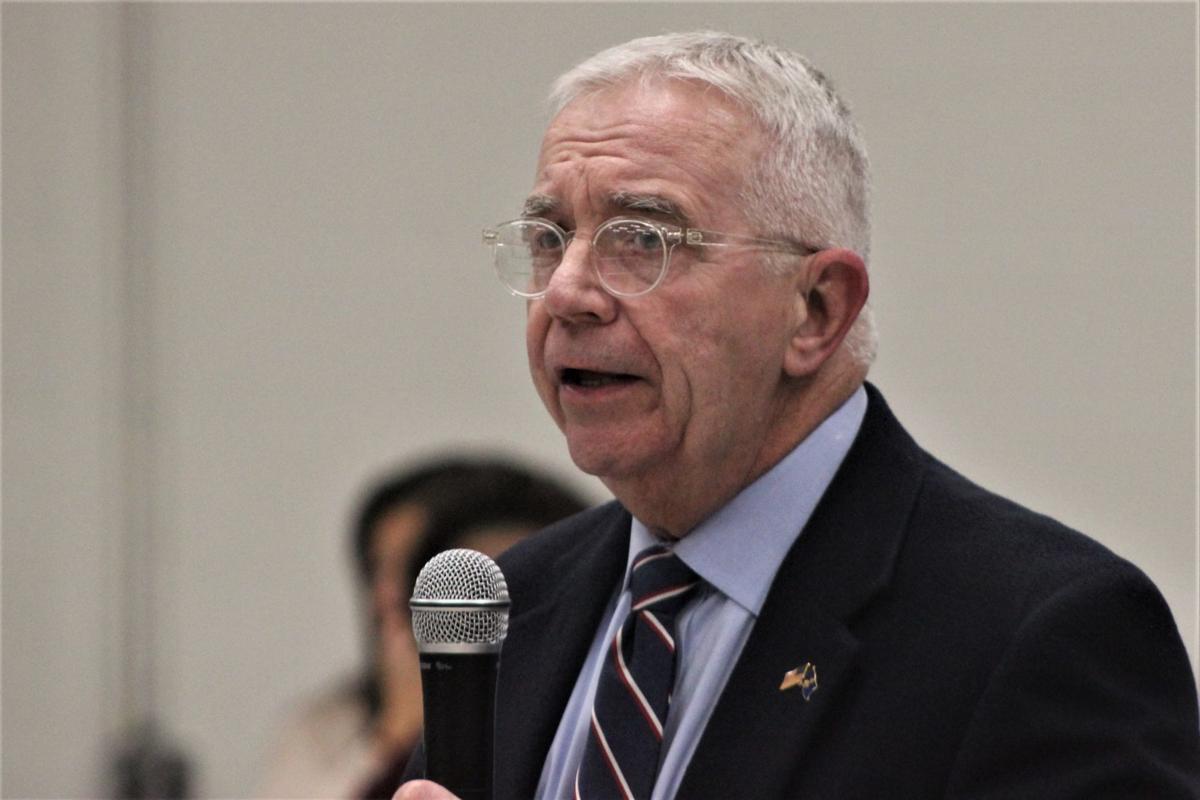 Education consultant Charles Ivory says meetings will not take longer than 90 minutes, to keep participants focused and to encourage participation.

David Salvo, the township’s superintendent of schools, works with members of the public at the first of three planned public meetings on creating a five-year strategic plan for the school district.

Education consultant Jerry Woehr says the school district wants input from as many community members as possible. He said at a recent meeting that the entire community has an interest in the quality of the schools.

Education consultant Charles Ivory says meetings will not take longer than 90 minutes, to keep participants focused and to encourage participation.

MIDDLE TOWNSHIP — In the cafeteria of the Middle Township Middle School, parents, school staff and community members sat in small groups around the lunch tables, ready to offer their opinions.

At each table was a large piece of paper and a series of markers. Their task for the evening was simple: Write down what is going right with the school district.

“The first step is to bring the community together and ask, ‘What’s good about this place? Why do you want to be here?’ The second session will be, 'OK, how do we get better?'” said Jerry Woehr, one of two educational consultants working on the project.

For Middle Township, the diversity in the district was cited as a strength by both staff members and parents, he said. Parents also see the teachers in Middle Township as caring and dedicated.

The exercise, the first of three planned at the school, is part of a process to develop a five-year strategic plan for the district. A similar process undertaken in 2013 helped develop the current strategic plan, which district officials say gives community members a voice in the district’s goals and initiatives and in how to improve the school as a whole.

The first of the three 90-minute meetings took place Wednesday, Nov. 20. According to Woehr, people often come ready to talk about problems, but he likes to start things off with what is going right.

With fellow consultant Charles Ivory, Woehr talked those gathered in the gym through the process. Each person was asked to write down ideas on a section of the paper. The group at each table then sought three items they could all agree on, which one member told to the whole group.

The facilitators made sure there were both school staff and parents at each table.

The next meeting, 6:30 to 8 p.m. Monday, Dec. 9, will cover some of the problems in the district, with a final meeting planned for Wednesday, Jan. 22, at the same time to consolidate a plan. Each meeting is at the cafeteria of the Middle School, 300 E. Pacific Ave.

The final meeting will look at what the school district could do to make improvements discussed at the previous meetings.

Ivory told those gathered they are careful not to allow any meeting to go over 90 minutes. That helps keep people focused and makes it easier for community members to participate.

The Nov. 20 meeting got started a little late.

“Regardless of when we start, we will finished by 8 o’clock. That’s a promise that we make to you,” Ivory said. “This isn’t the kind of meeting where three hours later, you’re exhausted and you really need to be home with your family.”

He also said the process is interactive.

“You will not be listening to speeches from anyone in this room. Certainly not from Jerry or I,” he said.

A spread of snacks, soft drinks and desserts provided by the school district, lined up on tables along one wall, may also help encourage participation.

Ivory helped work on the district’s strategic plan for 2014-19, which focused on community engagement, budget and finance, curriculum and school climate. In May and June of 2013, a similar series of public meetings were held to gain insight into the community priorities.

Through the fall of that year into the winter of 2014, school administrators analyzed thousands of comments and took the plan from a draft to the adopted form. Goals included improving communication with the community, increasing technology, maintaining buildings and grounds, increasing classroom time for students and more.

Each goal also outlined steps to be taken and identified who was responsible for its implementation.

A the end of the new process, the district expects to have a new five-year plan in place, “which will drive the district’s efforts and financial resources on mutually determined goals that support the needs of students,” according to a statement from the district.

Ivory said the consultants have worked with 50 school districts, from Cape May County to Bergen County, from Camden County to Atlantic County.

“We have been all over the state working with school districts,” he said.

Woehr said the meetings sought to use synergy to improve the district, meaning the combined efforts of the community was worth more than the sum of its parts.

“There is no one here who is not invested in Middle Township schools,” he said, including representatives of the business community and residents. “The reason for that is that if you’re a business owner, your taxes are going to be paying for that. If you happen to be a senior citizen, you invested in that because your home quality is going to be based on the quality of the school. If you’re a teacher, if you’re a parent, you understand that we want as much representation as we can to come up with the best plan.”

Those interested in participating in the strategic planning initiative may contact Martha Crawley at the school superintendent’s office, 609-465-1800, ext. 3100, or email crawleym@middletwp.k12.nj.us.