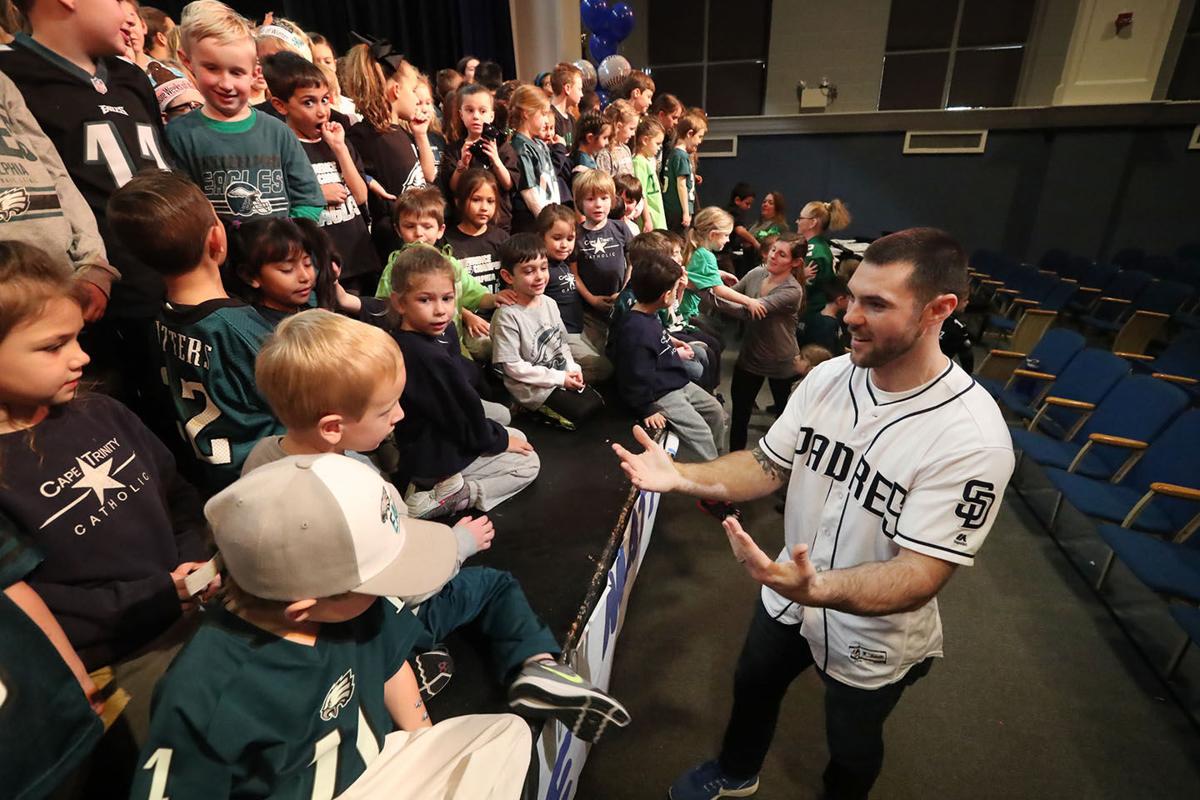 Matt Szczur, who plays baseball for the San Diego Padres, was a surprise guest speaker Friday at Cape Trinity Catholic School in Wildwood as part of Catholic Schools Week. He talked about being a bone marrow donor while in college. 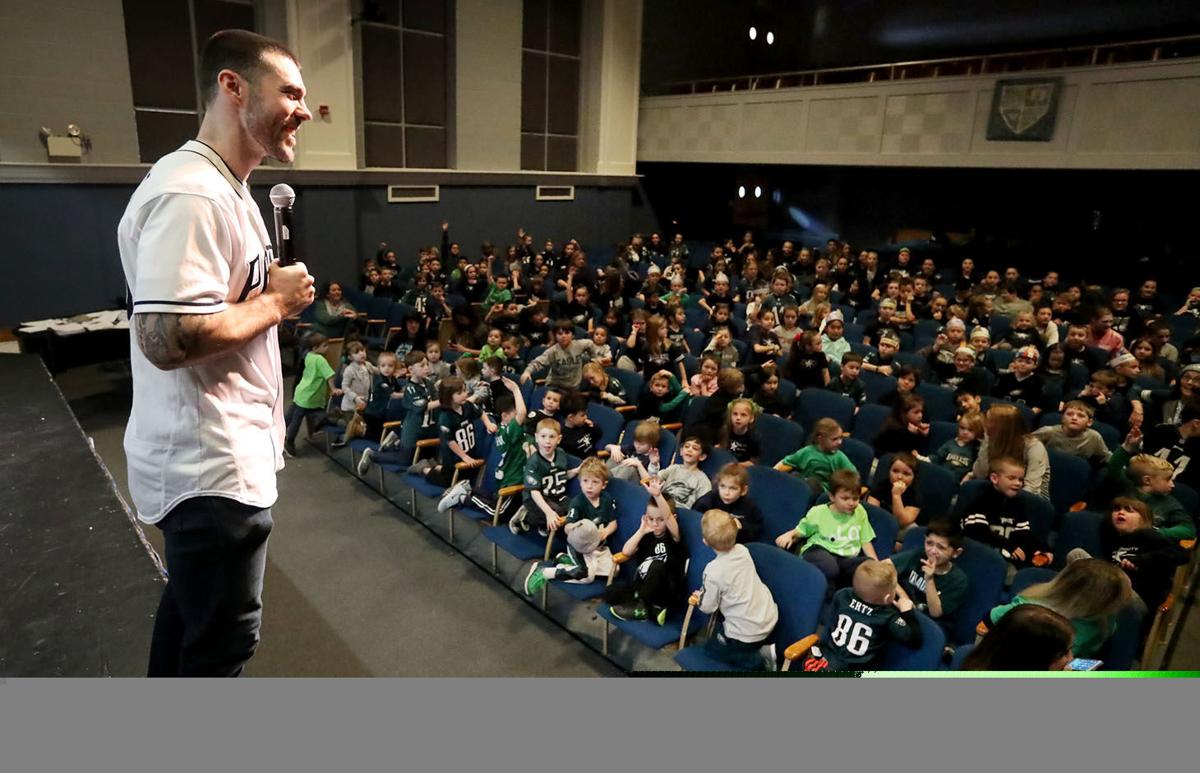 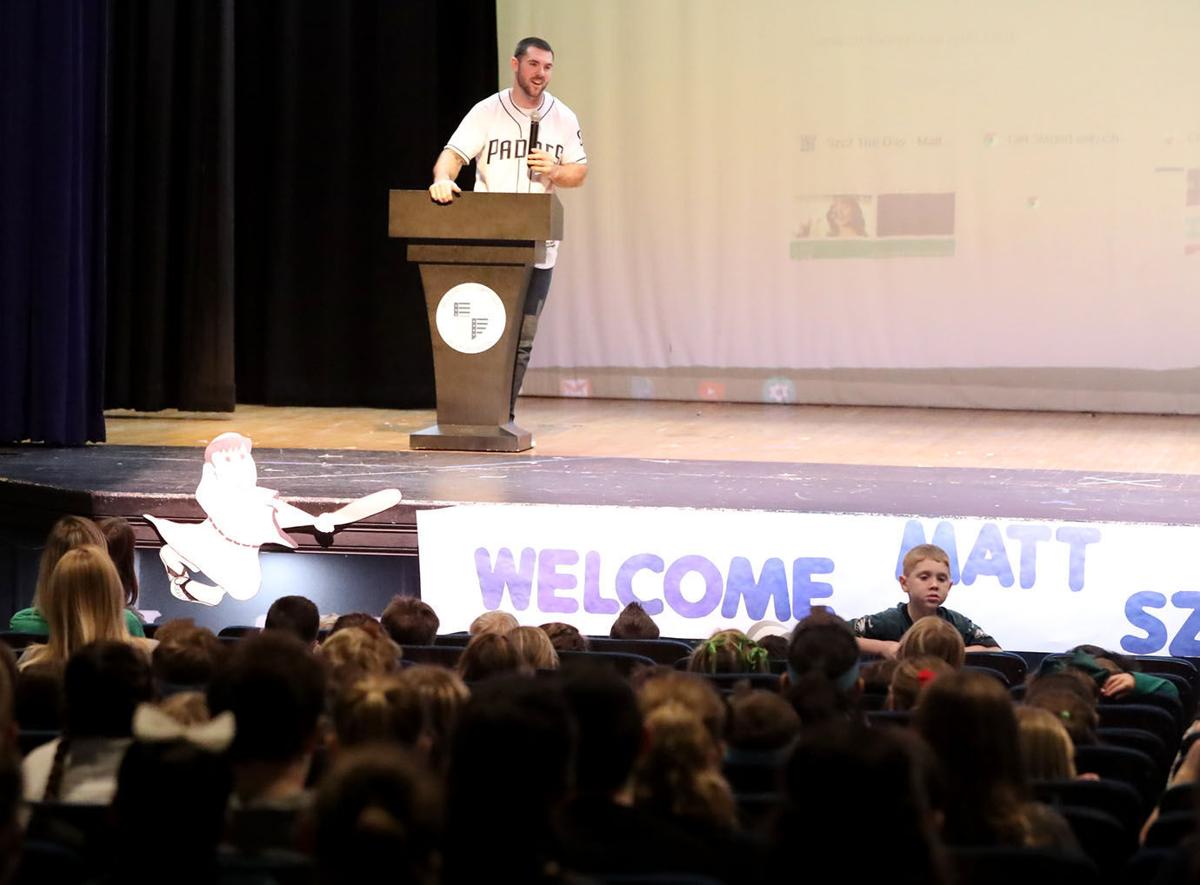 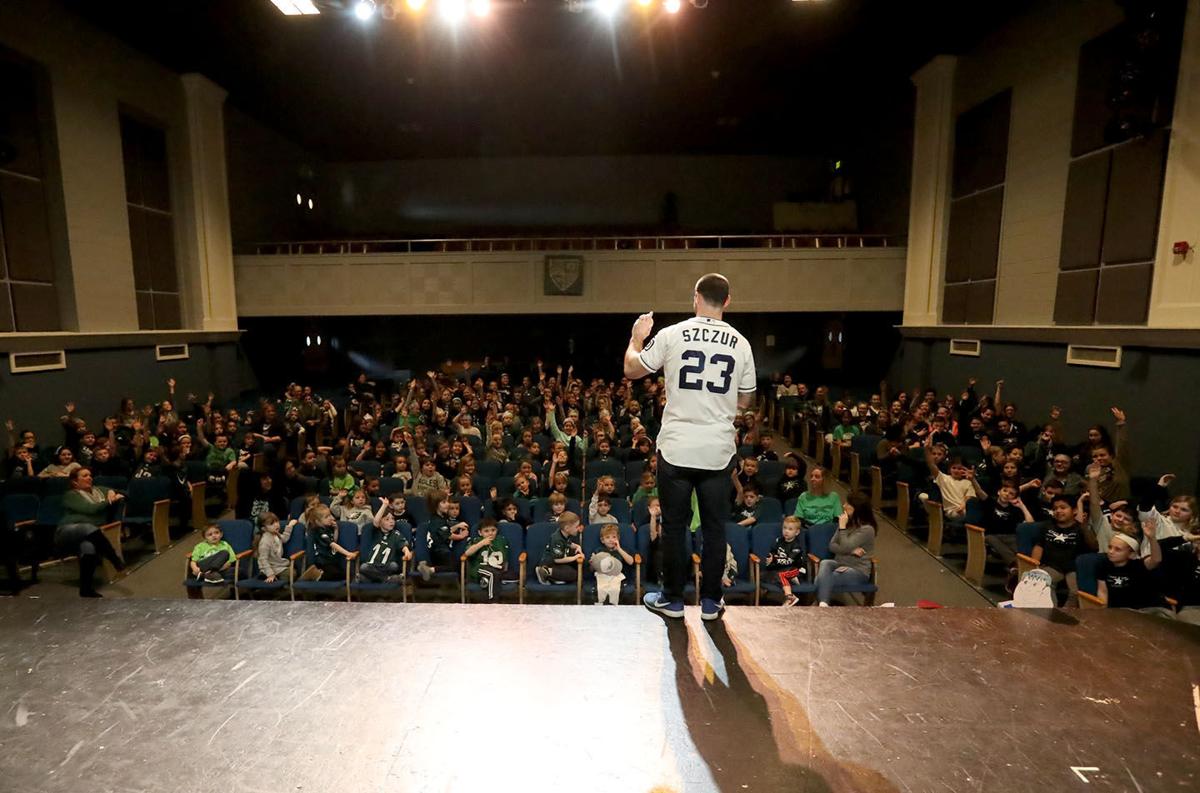 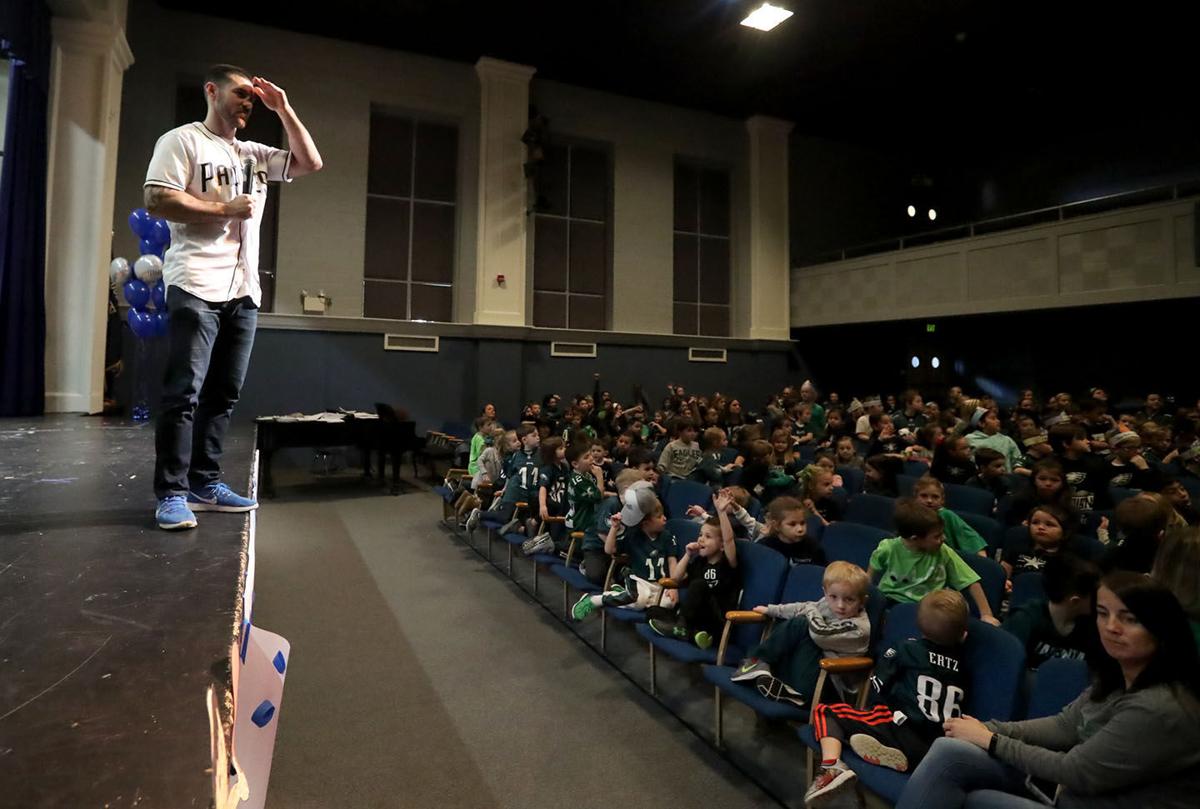 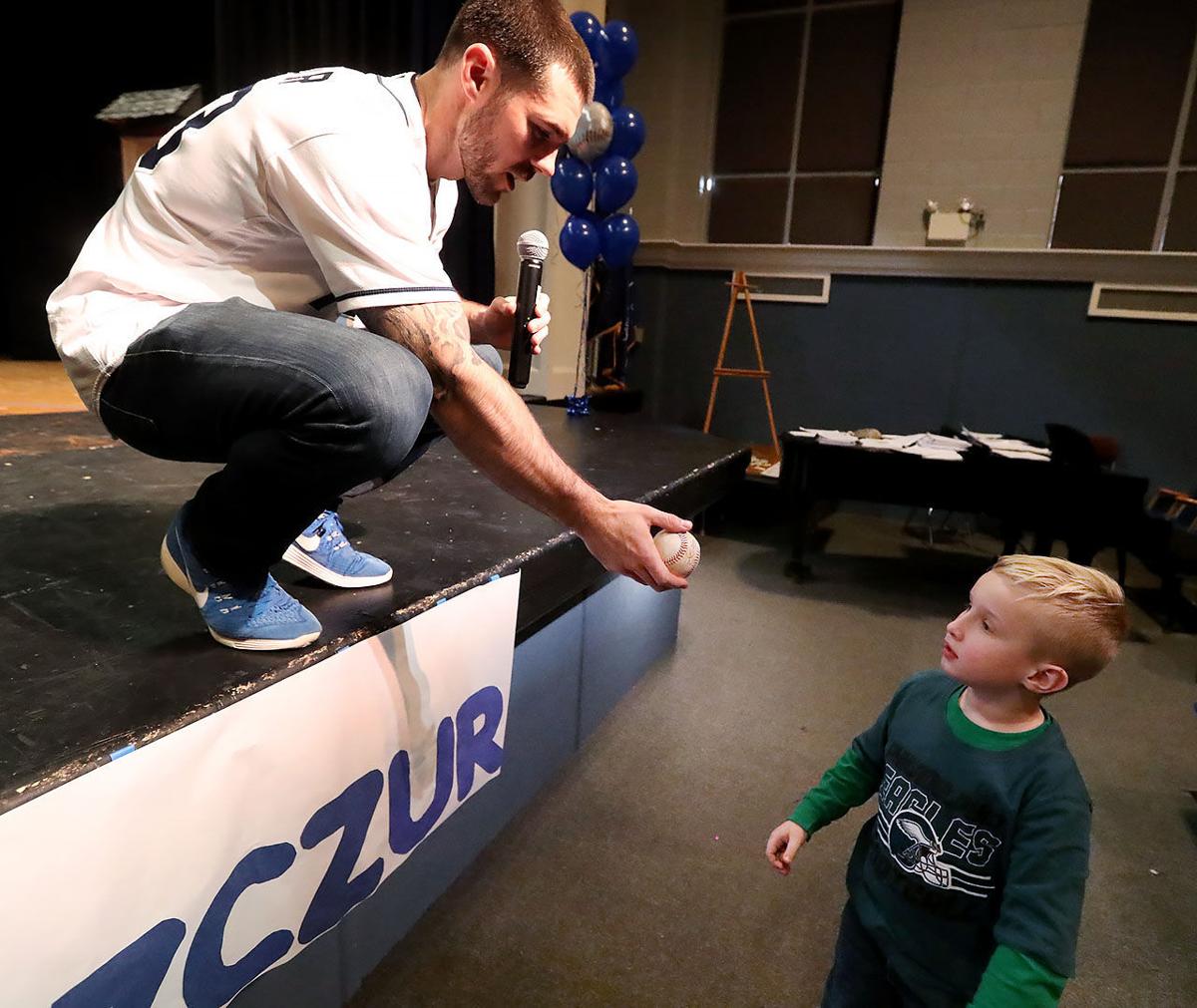 Matt Szczur professional baseball player for San Diego Padres gives a baseball to Mark Howard, 6 of Vilas during his surprise speak to the students during Appreciation Day at Cape Trinity Catholic as part of Catholic Schools Week in Wildwood Friday Feb 2, 2018. (The Press of Atlantic City / Edward Lea Staff Photographer)

Matt Szczur, who plays baseball for the San Diego Padres, was a surprise guest speaker Friday at Cape Trinity Catholic School in Wildwood as part of Catholic Schools Week. He talked about being a bone marrow donor while in college.

Matt Szczur professional baseball player for San Diego Padres gives a baseball to Mark Howard, 6 of Vilas during his surprise speak to the students during Appreciation Day at Cape Trinity Catholic as part of Catholic Schools Week in Wildwood Friday Feb 2, 2018. (The Press of Atlantic City / Edward Lea Staff Photographer)

WILDWOOD — Students at Cape Trinity Catholic were surprised with a visit from Major League Baseball player Matt Szczur Friday, Feb. 2, but his appearance was more about service than sports.

Szczur was there for the final day of Catholic Schools Week to talk about a bone marrow donation he made while in college that helped save a toddler's life.

Catholic Schools Week is a decades-old event sponsored by the National Catholic Education Association to highlight the role of a parochial education and its role in the community.

“It’s all about 'How are we serving others, how are we leading, how are we being the best Christians we can be in this world?'” said Julie Roche, director of development for Cape Trinity Catholic elementary and Wildwood Catholic High School.

Szczur, a Cape May native who graduated from Lower Cape May Regional High School, said that although he didn’t attend Catholic schools growing up, he is a devout Catholic. That connection to his faith led him to become a donor while attending college at Villanova, which could have put his baseball career in jeopardy.

It didn't, and now Szczur lives in San Diego, where he plays for the Padres.

Szczur’s visit was part of a week of special activities that included delivering candy buckets to local police departments Tuesday, a patriotic rosary with local veterans Wednesday, and a lunch for staff by the Parents Association on Thursday.

Roche said the visit was in line with the theme of this year’s Catholic Schools Week: “Learn. Serve. Lead. Succeed.”

“There’s a lot of fun activities, but there’s also service projects every day to try and help out the community,” said Cathryn Flammer, advancement director at Assumption Regional Catholic School in Galloway Township.

Assumption held a science fair and pep rally and had students attend Mass in school uniform.

Flammer said an important part of Catholic education is the sense of community in the school.

“It’s great because as teachers, and administrators, I know every student in the school. I know them by name and I know who their parents are,” she said.

Flammer said enrollment at Assumption, which serves preschool to eighth-grade students, is about 380 and growing.

“We’re going strong. Our enrollment continues to go up. Yes, we do have smaller class sizes; however, we’re not small,” she said.

“You do see a lot of the families that were alumni, and they’re bringing their kids now,” she said.

There are 28 Catholic elementary schools and nine Catholic high schools in South Jersey, according to the Camden Diocese.

Roche said Wildwood Catholic, which at one point faced closing, was able to stay afloat through a merger with Cape Trinity. The two schools now share one building and have a total enrollment of about 400.

“Enrollment is strong, but not just strong; it’s continuing to grow,” Roche said.

They are also operating in the black financially, she said.

For Roche, a Catholic school education is about more than academic excellence.

“We help shape the whole person for life after high school,” she said, through community service and modeling Jesus in the world.

GALLOWAY TOWNSHIP — Several development projects are coming to the township, marking the success of the council and planning board, who have worked to create space ripe for developers’ plans as well as quicken the application process.

GALLOWAY - Students and faculty at Stockton University celebrated the beginning of Black History Month Thursday with the annual raising of the Pan-African flag.

As digital natives, students interested in topic of net neutrality

EGG HARBOR CITY — In Decem-ber, as the Federal Communications Commission prepared to vote on a repeal of net neutrality rules, the students at Cedar Creek High School were preparing to fight it.

Julianna Roche, a senior at Wildwood Catholic High School, has received the inaugural Award for Excellence at the annual Student Leadership on…

Harry Davidson Plumbing, Since 1919 Our Customers recommend us to their friends. Sewer and d…