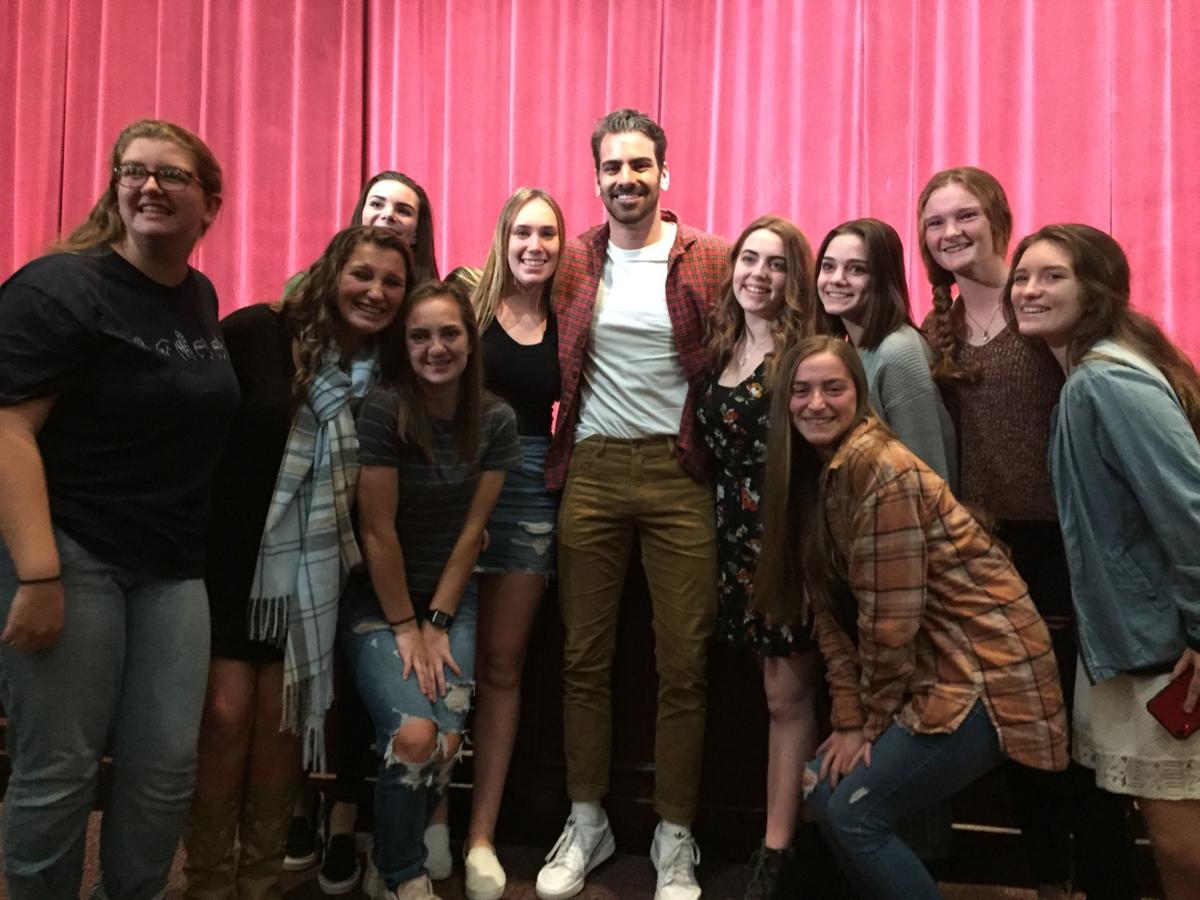 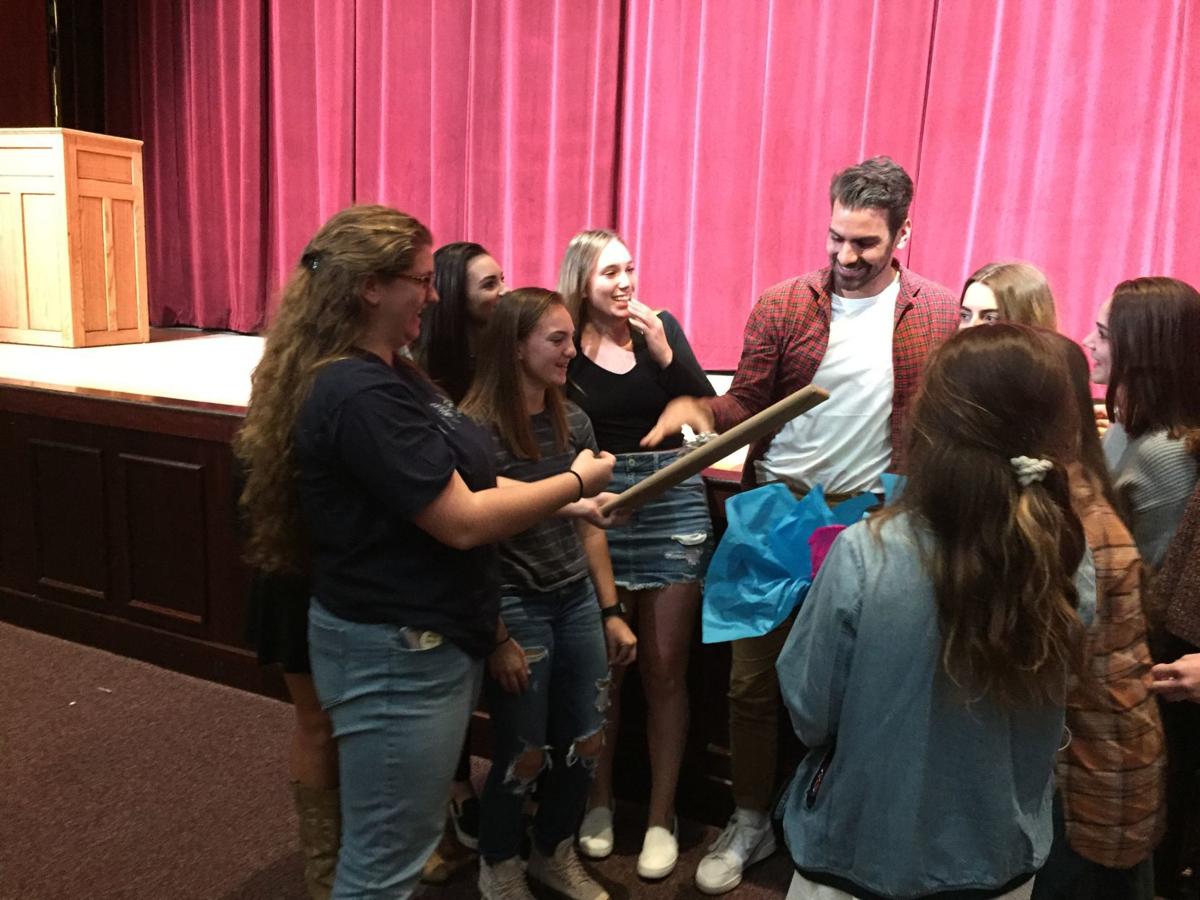 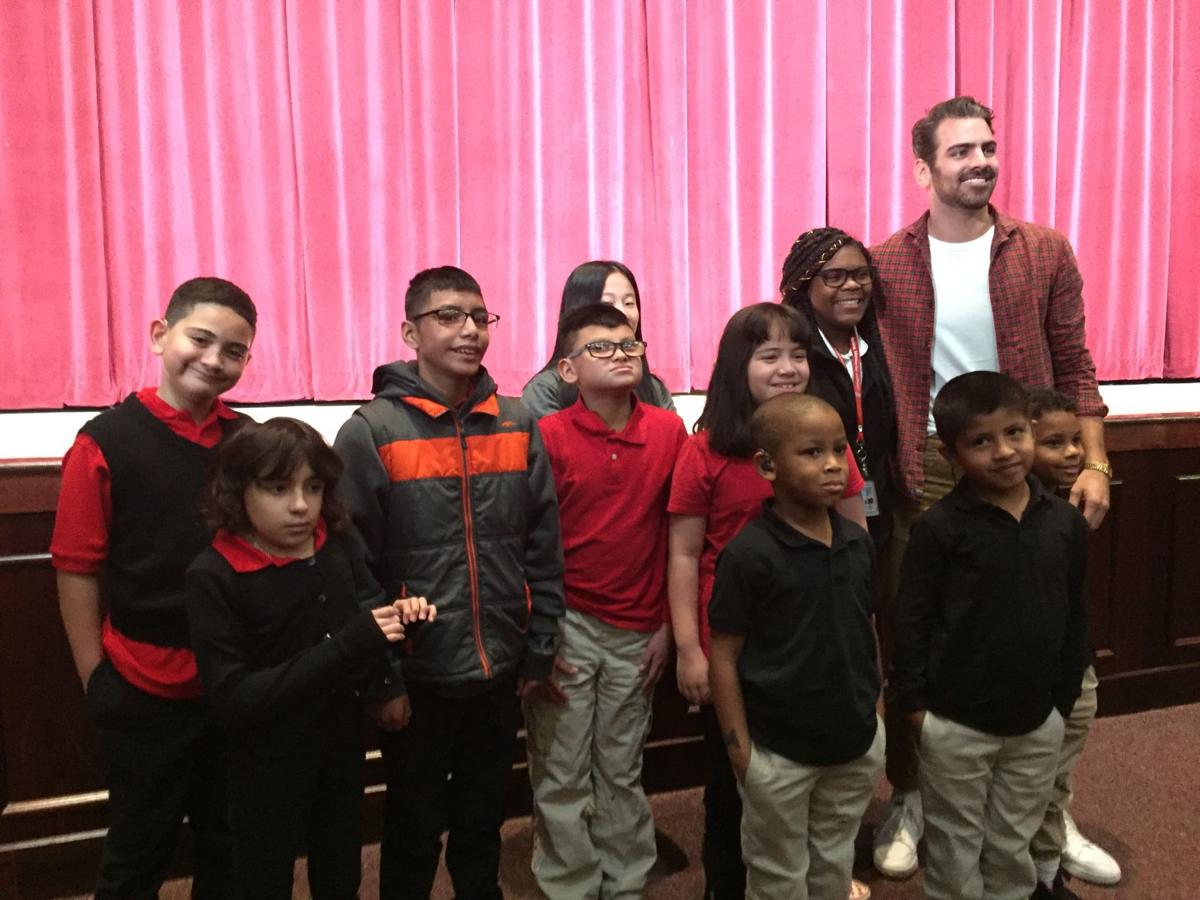 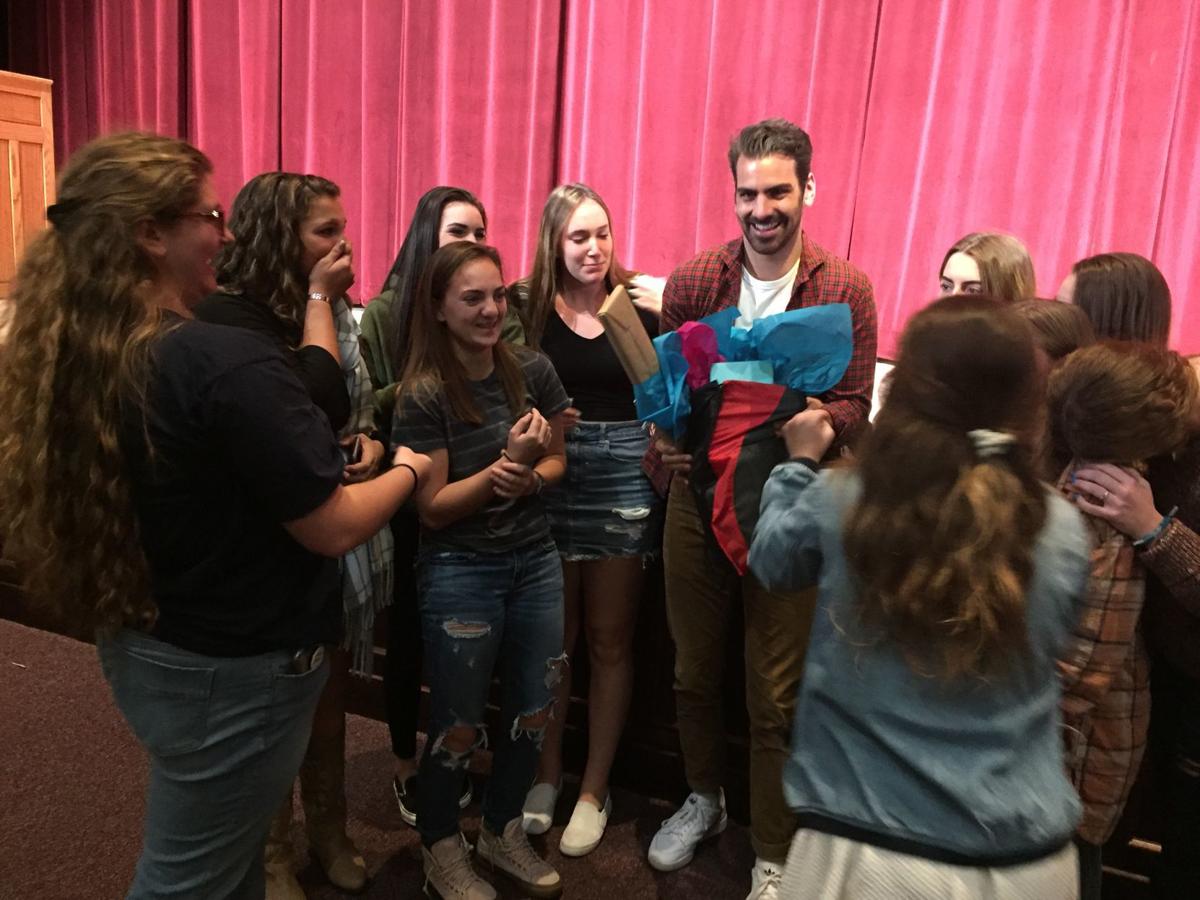 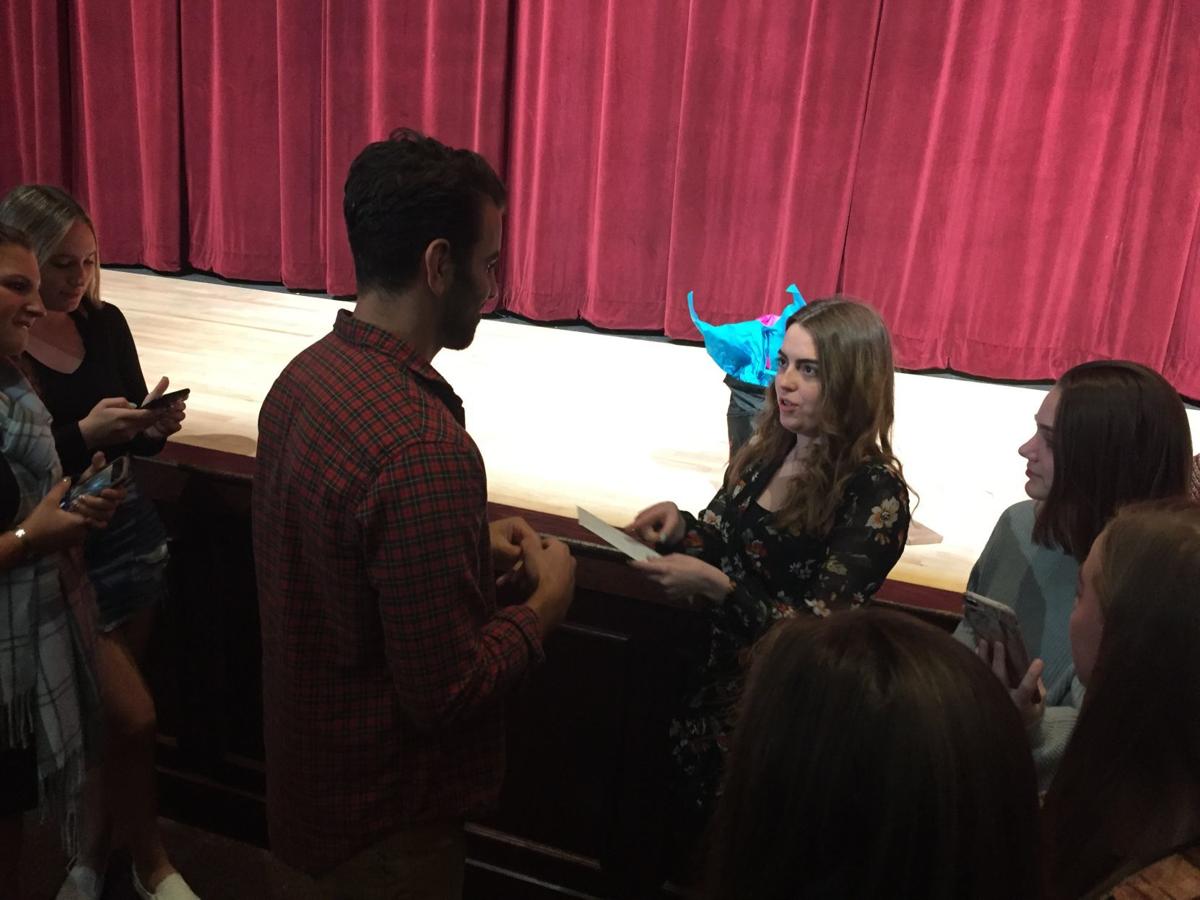 Kierstyn "Kiki" Kuehnle, 16, of Ocean City presents a letter to Nyle DiMarco after his presentation at Ocean City High School Monday, Dec. 2, 2019. Kuehnle, who was born without hearing in one ear and diagnosed with hearing loss in her other, helped fundraise to bring DiMarco, a nationally renowned deaf activist, to the school. 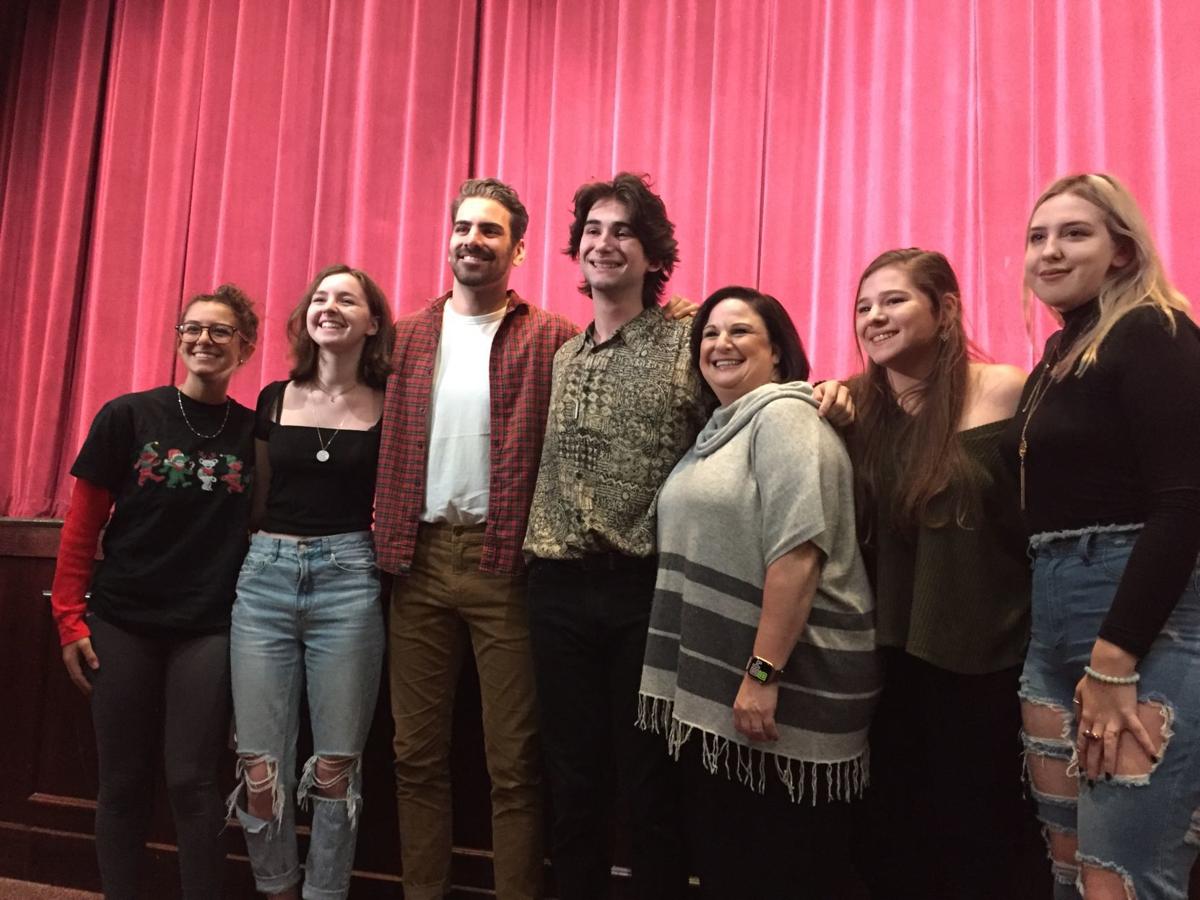 Kierstyn "Kiki" Kuehnle, 16, of Ocean City presents a letter to Nyle DiMarco after his presentation at Ocean City High School Monday, Dec. 2, 2019. Kuehnle, who was born without hearing in one ear and diagnosed with hearing loss in her other, helped fundraise to bring DiMarco, a nationally renowned deaf activist, to the school.

OCEAN CITY — The look of star-struck excitement washed over Kierstyn “Kiki” Kuehnle’s face as she handed a letter she had written to actor and national deaf activist Nyle DiMarco Monday morning inside her school’s auditorium.

The 16-year-old, who was born without hearing in one ear and six years ago began losing hearing in her other ear, donated money she and her classmates raised through the Pennsylvania Walk4Hearing last year to bring DiMarco to Ocean City High School as part of an assembly for American Sign Language students there and an additional 64 deaf children from nine schools throughout the state.

“To have him here to today to open up more about his life and why it’s important to love yourself and to give back to the community and be proud of your deafness, I really wanted that here to bring awareness to the hearing students who have no pathway to deafness other than sign language. And he can really guide them through that,” Kuehnle said.

For the first year and a half of his life, Cole Renart lived 60% of his day in language isolation.

In addition to acting, DiMarco is a winner of “Dancing with the Stars” and “America’s Next Top Model,” an honorary spokesman for Language Equality and Acquisition for Deaf Kids and founder of the Nyle DiMarco Foundation, which works to improve the lives of deaf people around the world.

“This is like The Beatles in the deaf world,” said Ocean City ASL teacher Amy Andersen, former New Jersey Teacher of the Year whose platform was spreading awareness of sign language, deaf culture and language equality.

Andersen said she was grateful for the support from the administration and Board of Education in the ASL program. In the years since the high school began its American Sign Language class in 2004, the program has expanded to three levels and an active after-school club. She said having DiMarco speak to and inspire her students, who are mostly hearing, was a “life-affirming event.”

“For me as a teacher, to see that kind of inspiration going on, that it would maybe inspire students to start thinking about how they’re going to make a difference and make an impact in society,” she said, “extends far beyond learning the language.”

Unlike most deaf children, DiMarco, who is deaf, was born into a multigenerational deaf family.

“He grew up in a utopia, he never felt like there was something wrong,” Andersen said. “A really big part of the work that he does is his foundation, the Nyle DiMarco Foundation, and it works to bring awareness to language deprivation and how rampant that is among deaf children because 90% of deaf children have hearing parents. He really wants to have resources, information, help for parents, and he supports deaf children all over the world.”

In addition to the 186 Ocean City students in the audience Monday was 4-year-old Cole Renart, of Galloway Township, the first deaf child in New Jersey to have a state-funded mentor and the inspiration for two laws signed in August that add protections for deaf students in New Jersey. Also there were Elizabeth Hill, director of the state Division of Deaf and Hard of Hearing, and the New Jersey Association of the Deaf’s President Annemarie Buraczeski, of Ocean City.

Andersen’s first sign language teacher, Gina Lanza, was also in attendance, as well as two former Ocean City students who went on to use ASL in their careers.

During the assembly, DiMarco encouraged the students to look at their differences from hearing students as assets, not disabilities, and to believe in themselves and follow their dreams.

“It’s really all about community and awareness and giving anyone and everyone that ability to have a connection with their deafness and that deaf pride. And just to feel powerful and prideful in what they have. And that hearing loss or deafness isn’t a disability, but it’s a whole culture,” Kuehnle said.

She said she has the same passion for helping others as DiMarco and hopes to one day give back to the community. She has already started in Ocean City, where she has donated $20,000 from her fundraising efforts for microphone systems in the classroom to enhance the sound for hard of hearing students.

“Knowing that there are going to be more kids coming in like that and that they’re going to have a better education, it makes my heart full because that’s what I want to do, I want to help kids when I’m older,” she said.

Ocean City cheers on Teacher of the Year Andersen

New Jersey’s elementary school students would be required to learn, read and write cursive by the end of third grade, under a bill in the stat…