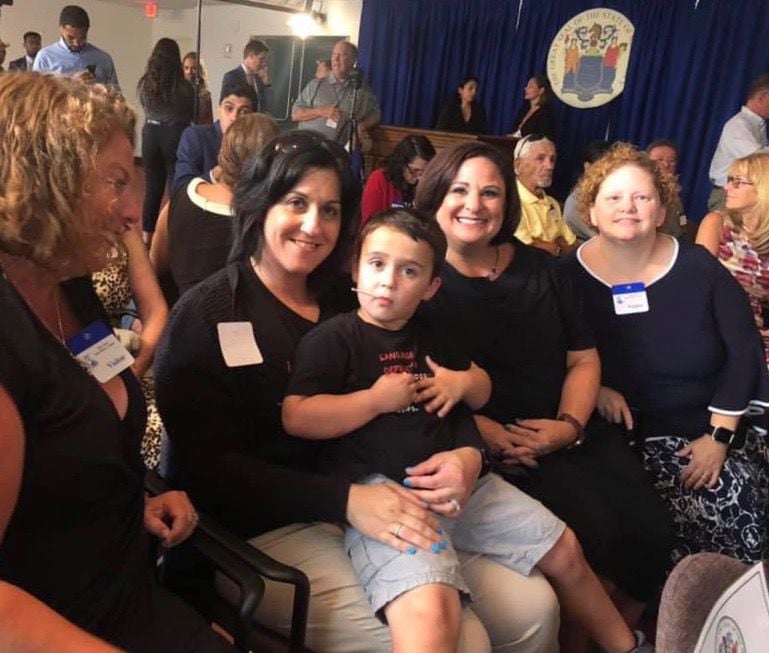 From left are Carrie Pogue, Stephanie Renart, Cole Renart, Amy Andersen and Michelle Cline at the Statehouse in Trenton on Monday for the signing of two laws that provide and enhance access and protections for deaf students and families in New Jersey. 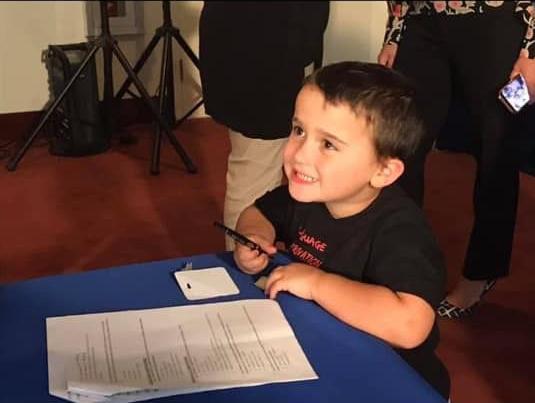 Cole Renart, 4, of Galloway Township, who is deaf, holds a pen used to sign two laws that provide and enhance access and protections for deaf students and families in New Jersey. 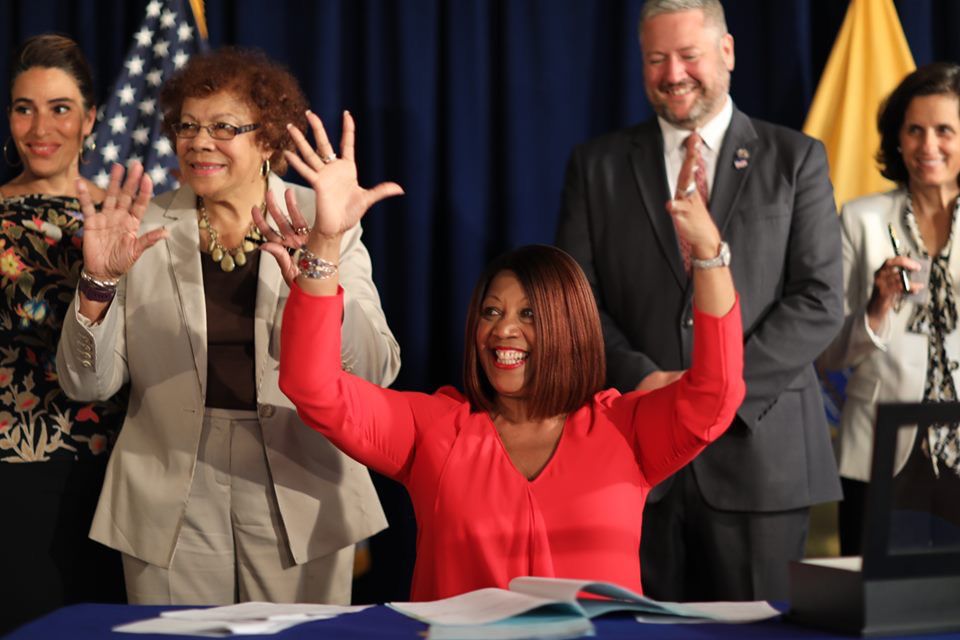 Lt. Gov. Sheila Oliver applauds in American Sign Language after signing bills Monday in Trenton to create a Deaf Student Bill of Rights and a Working Group on Deaf Education.

From left are Carrie Pogue, Stephanie Renart, Cole Renart, Amy Andersen and Michelle Cline at the Statehouse in Trenton on Monday for the signing of two laws that provide and enhance access and protections for deaf students and families in New Jersey.

Cole Renart, 4, of Galloway Township, who is deaf, holds a pen used to sign two laws that provide and enhance access and protections for deaf students and families in New Jersey.

Lt. Gov. Sheila Oliver applauds in American Sign Language after signing bills Monday in Trenton to create a Deaf Student Bill of Rights and a Working Group on Deaf Education.

For the first year and a half of his life, Cole Renart lived 60% of his day in language isolation.

Born without any hearing, Cole was 17 months old when he began receiving early intervention with a deaf American Sign Language teacher while he was at daycare.

“Within three months, his language exploded,” said Amy Andersen, an ASL teacher at Ocean City High School and 2018 New Jersey Teacher of the Year, who helped lobby the state for Cole’s interventions. “It was the first time it had been done in the state of New Jersey.”

Andersen said the laws will help students who are deaf or hard of hearing in those first few critical years of building a foundation language.

“It’s going to make all the difference in learning, in acquiring another language, their reading level, their academic success,” Andersen said. “It’s going to give them the best shot in life moving forward.”

Stephanie Renart said she has been fighting for equality in education for Cole since the day he was born. For Renart, who testified before the Legislature last year on the issue, the laws mean lessening a parent’s fight and ensuring a student is taught in their mode of communication.

“My son, all he needs is access to language. It’s not special education,” Renart said. “That’s really the most important is to get the kids the language that they need all day every day, not an hour or two here or there.”

Andersen made deaf education a platform during her term as Teacher of the Year and testified before a legislative committee on the laws.

“Specifically, I was speaking to early language acquisition and equality, ensuring that parents and families get the information that they need in more of a balanced approach, so that they’re being told about ASL and being shown how to take advantage of the opportunities,” Andersen said.

Last fall, she also brought with her several students to Trenton to testify before lawmakers, including Ocean City student Kierstyn Kuehnle, who is hard of hearing and was recently named the recipient of the 2019 Outstanding Young Adult award from the Hearing Loss Association of America.

Andersen said the work at the state level was started before she came on board by advocates like Christopher Sullivan and Michelle Cline, and with the support of legislators including sponsors Sens. Shirley K. Turner and M. Teresa Ruiz, and Assembly members Daniel Benson, Annette Quijano, Pamela Lampitt, Nicholas Chiaravalloti, Raj Mukherji, Ralph Caputo and Mila Jasey.

Cline, executive director of the Walden School at The Learning Center for the Deaf, said the Bill of Rights will promote the importance of communication equity for all deaf and hard-of-hearing children in New Jersey.

“New Jersey has become the first state to support a full comprehensive program assuring that all deaf, deaf-blind and hard-of-hearing students be given equal opportunities to obtain equitable education in a manner that would best help them thrive and communicate with teachers and students in all phases of the school day,” Cline said.

Ocean City cheers on Teacher of the Year Andersen

• Access to appropriate screening and assessment of hearing and vision capabilities and communication and language needs, and the continuation of screening and evaluation services throughout the educational experience

• Opportunities to meet and associate with adult role models who are deaf, hard of hearing or deaf-blind and who use varied communication modalities

• A placement that is best suited to the student’s individual needs including, but not limited to, social, emotional, communication and cultural needs

• Individual consideration for free, appropriate education across a continuum of placement options required by law

• Information to families from appropriately qualified and certified professionals on the medical, ethical, cultural and linguistic issues of the deaf community

• Access to mental health services and supporting services from qualified and certified providers fluent in the student’s primary mode of communication, including American Sign Language

MAYS LANDING — Outside the AtlantiCare Teen Center at Oakcrest High School, a small garden is beginning to bloom.

NJ Department of Education recognizes county teachers of the year

Twenty-one teachers from throughout the state were recognized as County Teachers of the Year for 2019-20 on Wednesday.

GALLOWAY TOWNSHIP — A Stockton University senior received a $100,000 check from Justin Bieber last week to further her work in mental health a…