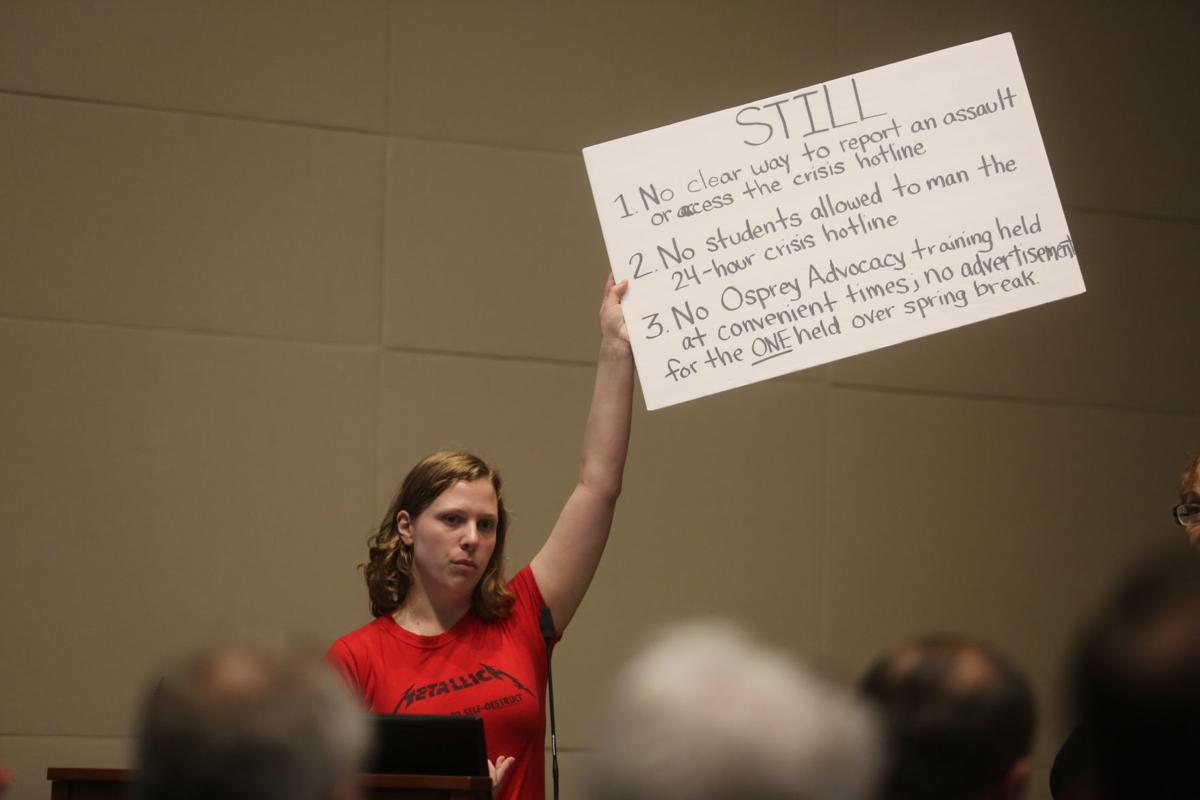 Stockton student Casey Rosamond, 23, holds up a sign in protest of the school’s handling of recent sex-assault lawsuits at the university’s Board of Trustees meeting on Wednesday. 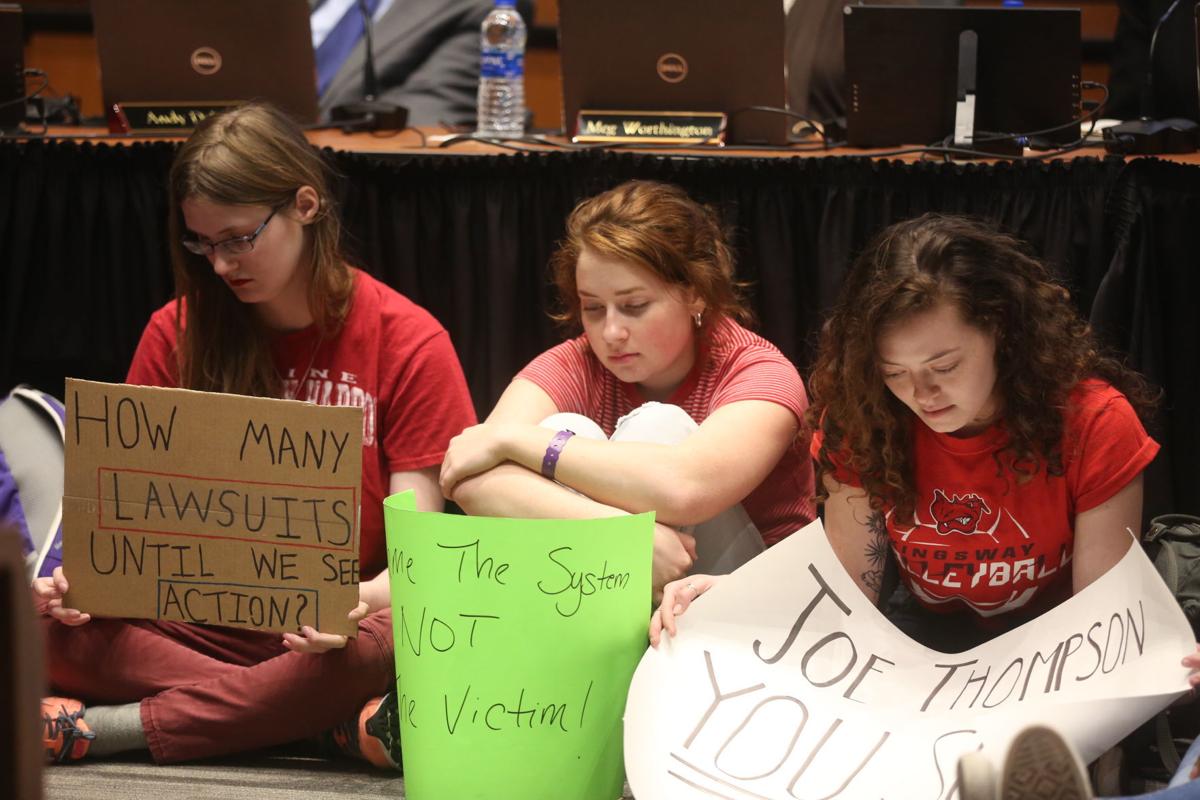 From left, Ariel Petchel, Danielle Napier, 19 and Eryn Swineford, 21, sit in front of the Board of Trustees table Wednesday with signs that say ‘How many lawsuits until we see action?’ and ‘Blame the system NOT the victim!’

Stockton student Casey Rosamond, 23, holds up a sign in protest of the school’s handling of recent sex-assault lawsuits at the university’s Board of Trustees meeting on Wednesday.

From left, Ariel Petchel, Danielle Napier, 19 and Eryn Swineford, 21, sit in front of the Board of Trustees table Wednesday with signs that say ‘How many lawsuits until we see action?’ and ‘Blame the system NOT the victim!’

GALLOWAY TOWNSHIP — In the wake of nine lawsuits filed against Stockton University since July alleging sexual assault and negligence, a group of a dozen students protested Wednesday night during a Board of Trustees meeting.

“Basically, we’re here because you have put an effort, but the issue is it’s not the effort,” student Casey Rosamond, 23, said. “You’re fixing the institution from the bottom up when it has to come from the top down.”

Rosamond, along with other protesters from the student activist group Students Against Rape Culture (SARC), sat in front of the board table with signs that said “How many lawsuits until we see action?” and “Blame the system NOT the victim!”

Rosamond handed a stack of packets of educational materials on sexual assault and violence to the board, asking members to read it and understand that rape and sexual violence is a cultural and societal problem.

University President Harvey Kesselman said that the board “isn’t done yet” when it comes to improving safety on the campus.

“We will take the time to review and read the literature,” he said. “Give us a chance to continue to work with you and work with the rest of the students.”

SARC protesters met with Kesselman last fall, demanding advocacy for sexual assault victims, an increase in resources for the Women’s, Gender and Sexuality Center, a 24-hour crisis hotline and additional training for students on violence prevention.

During his committee report, Vice President of Student Affairs Chris Catching said that the Women’s, Gender and Sexuality Center on campus will have a new space opened in the fall with a new staff member, an assistant director, joining the center. He also noted the new 24-hour Violence Intervention Hotline that students can call which began in October.

“We really look forward to continuing the great work to providing resources in this area,” Catching said.

The university has also planned Greendot Bystander Intervention Training this month, as well as funded faculty and staff members to attend national conferences focused on sexual violence education and support, Catching added, among other developments.

All the civil suits allege sexual assault by a student and negligence by the college in its response. Only one person has been criminally charged.

MAYS LANDING — A man accused of inappropriately touching a woman, recording the interaction …

ATLANTIC CITY — Ten years ago, Luana Cordeiro was days away from graduating college when she let her addiction take over.

Stockton University professor removed after past allegations come to light

GALLOWAY TOWNSHIP — During a time when Stockton University is engaged in pending litigation and student complaints about transparency, public …