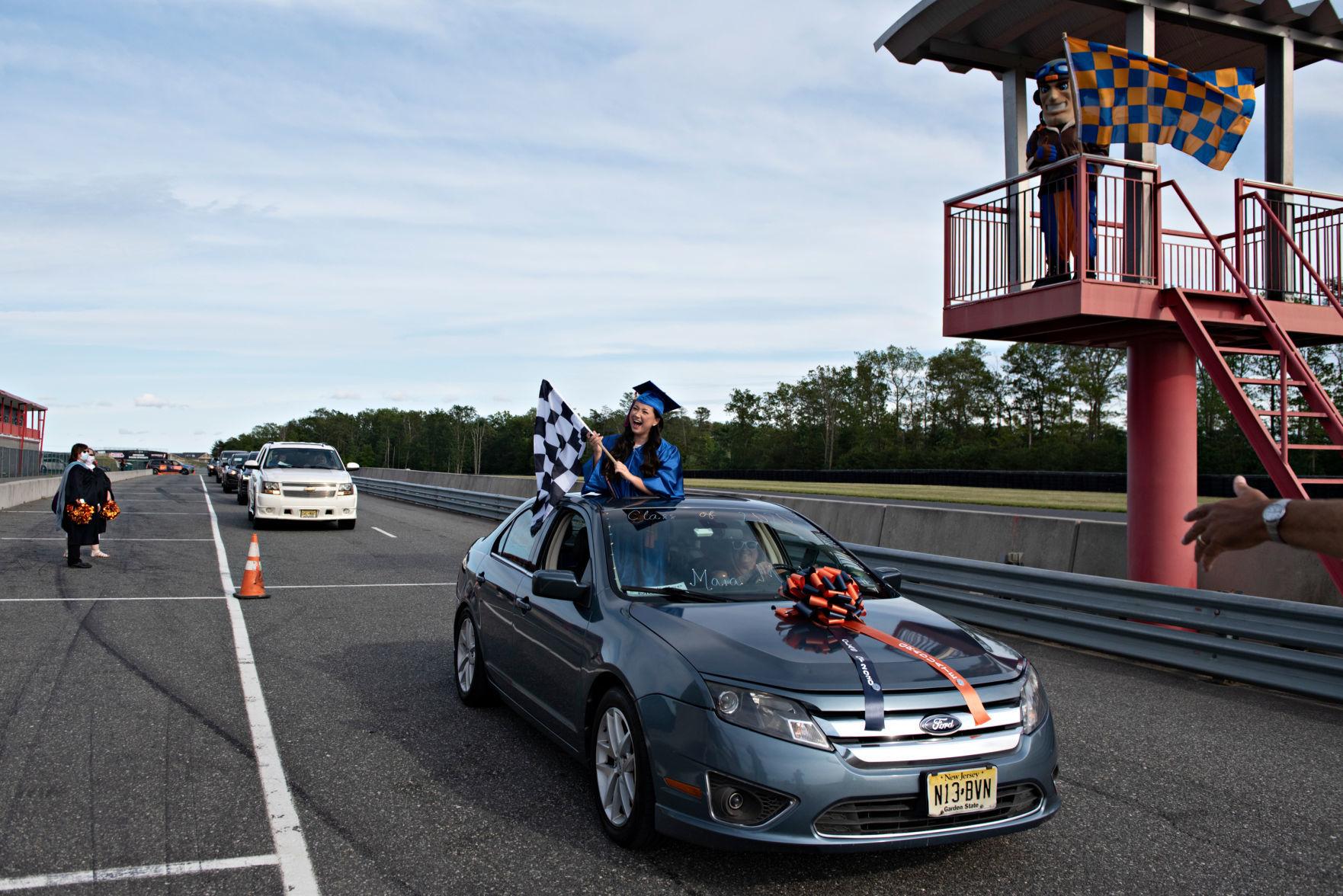 Millville High School senior Maia Morales waves the checkered flag before setting out for a 2 mile loop around the track Tuesday during a drive-thru graduation ceremony at the New Jersey Motorsports Park. 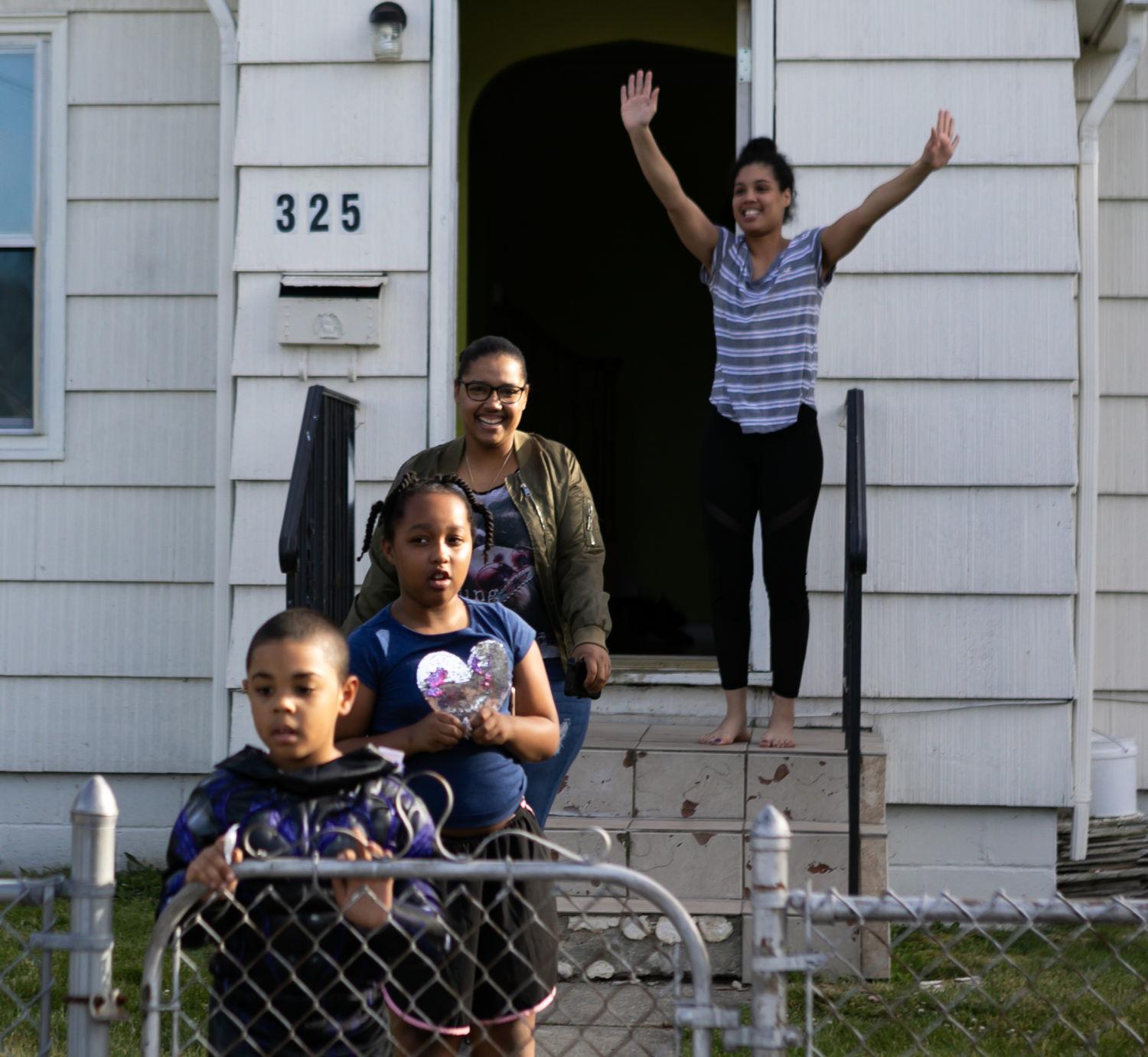 Kristian Gonyea / for The Press

Pleasantville teachers and administrators held a drive-by caravan around Pleasantville for its high school seniors Tuesday. Residents came out of their homes and waved as the police-escorted educators passed by. 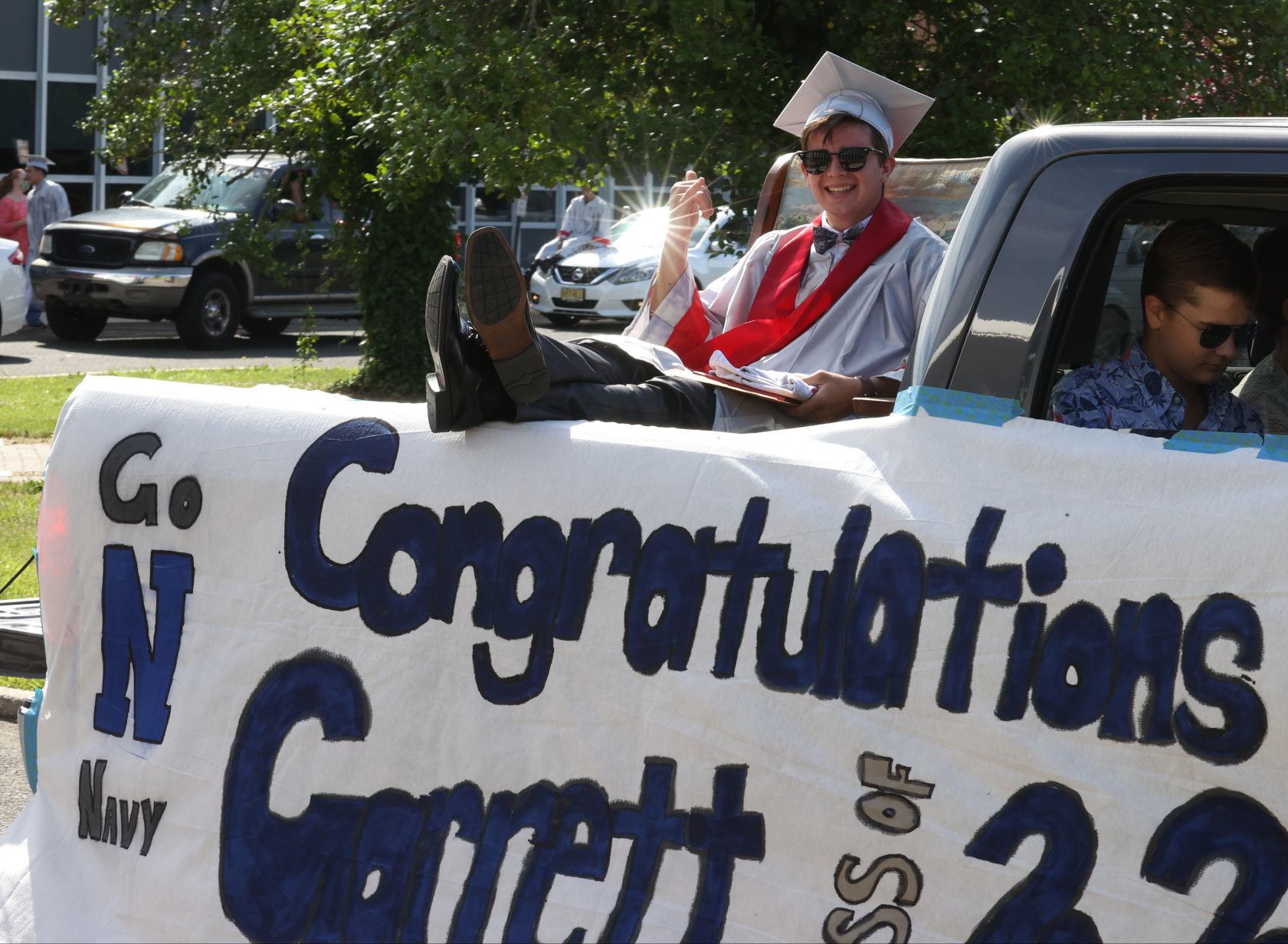 William Hickman, 43, and his wife, Sarah, 43, who were arrested in March 2019 along with five others, originally pleaded not guilty to the alleged fraud scheme, which authorities said targeted the state health benefits plans of teachers, police officers, firefighters, state troopers and others.

During a U.S. District Court video conference Tuesday before federal Judge Robert B. Kugler, Hickman pleaded guilty to two of the 50 charges he was facing: conspiracy to commit wire and health care fraud, and conspiracy to commit money laundering. As part of Hickman’s plea agreement, charges against Sarah Hickman will be dropped after debts are repaid.

“He prefers to go forward now because he wants to put this behind him and start life anew and get this matter moving,” Hickman’s attorney Charles McKenna told the judge.

CAMDEN — Sentencings have been postponed again for the more than two dozen people who have pleaded guilty as part of a more than $50 million health care benefits fraud scheme.

As part of his plea agreement with the U.S. Attorney’s Office, Hickman faces up to 30 years in prison without parole. He also agrees to a full restitution of at least $53 million, as well as forfeiture of property, including $26 million. Hickman also agreed to forfeit specific property obtained with criminal proceeds, including five investment accounts and four real estate parcels.

The prescription fraud scheme first came to light in summer 2017, when federal prosecutors subpoenaed records from several shore towns, including Margate. Prosecutors alleged a group of public employees had been recruited to obtain prescriptions for medically unnecessary compounded medications. The pharmacies that prepared the compounds received generous reimbursements, which they then paid back to a network of doctors, recruiters and employees taking part in the scheme, prosecutors said.

Charges against the first defendants in the case were announced in August 2017, but so far only one person has been sentenced. Sentencing hearings for more than two dozen people who have pleaded guilty have been scheduled for June, court records show.

In his appearance Tuesday, Hickman said he conspired with a Louisiana compounding pharmacy and Dr. John Gaffney of Margate to fill the prescriptions, for which he and the other defendants would receive kickbacks from the pharmacy.

CAMDEN — A status conference for the seven South Jersey co-defendants who have pleaded not guilty in an ongoing $50 million health benefits fraud scheme was held via telephone last week.

Gaffney pleaded guilty in 2018 but has yet to be sentenced. He is still practicing and has not had any action taken by the state Board of Examiners on his medical license.

Other defendants in the case who have pleaded not guilty include Brian Pugh, 42, of Absecon, a former co-owner of Tony’s Baltimore Grill and owner of BP Med 1 LLC; Thomas Schallus, 43, a Ventnor police officer; Christopher Broccoli, 48, of West Deptford, Gloucester County, a Camden firefighter; Thomas Sher, 47, of Northfield; and John Sher, 37, of Margate. Their trial is scheduled to begin Sept. 21.

During his plea hearing, Hickman said that in 2014 he worked for an unnamed individual who had an agreement with the Louisiana pharmacy, which has yet to be named in the case, for kickbacks for compounded prescriptions. He said he had similar agreements with other compounding pharmacies, as well.

CAMDEN — A status conference for the seven South Jersey co-defendants who have pleaded not guilty in an ongoing $50 million health benefits fraud scheme was held virtually last month.

Hickman said that in 2015, he brokered his own agreement with a compounding pharmacy to become a “master distributor” and received, through Boardwalk Medical LLC, 40% or more of the reimbursements received by the pharmacy.

Consistent with the details of the indictment, Hickman told Kugler on Tuesday he recruited Pugh, Matthew Tedesco and Michael Sher, founder of MBC Distributions LLC, as “recruiters” who then received a portion of the commission from the prescriptions. He also said Pugh recruited Schallus, Tedesco recruited Broccoli and Michael Sher recruited his two brothers.

Hickman admitted during the plea agreement to paying Pugh about $435,000 over five months, which necessitated the money laundering charges.

During his plea agreement, Hickman said he had asked his wife to create Boardwalk Medical LLC in 2013 to conceal the medical sales for other companies from his employer, and never told his wife what he was doing was illegal. He said he would use his wife’s email to conduct business in her name to conceal his involvement.

CAMDEN — Sentencings have been postponed again for the more than two dozen people who have pleaded guilty as part of a more than $50 million health care benefits fraud scheme.

“Sir, you knew what you were doing was wrong and it was against the law, didn’t you?” Kugler asked Hickman. “This was not a mistake. This was intentional, wasn’t it?”

“I knew what I was doing was wrong, and I know that it is against the law,” Hickman said before entering his plea.

“Properly prescribed medicines can be a vital part of a patient’s treatment, but they can also be costly,” U.S. Attorney Craig Carpenito said in a statement after the hearing. “This defendant orchestrated an elaborate scheme to submit prescriptions for unnecessary compounded medications on behalf of patients who had never seen a doctor. He did so to steal millions of dollars from medical health benefits systems that were intended to help employees get the treatments they needed and deserved.”

TRENTON — A second local teacher involved in a multimillion-dollar scheme to defraud the state health benefits system has lost his teaching license.

CAMDEN — For the second time, attorneys in the ongoing pharmaceutical fraud case have asked for more time to work through piles of documentation.

State lawmakers moved a bill that could permanently allow public consumption of alcohol in certain designated areas of Atlantic City. The city has a temporary order in place allowing for open containers until November.

On June 12th, Friday is the first day that open alcohol containers will be legally allowed on the AC Boardwalk. An open container bar crawl was held at 1pm starting at Bourre on NY Avenue to commemorate the historic moment (legal booze on the boards).

On June 12th, Friday is the first day that open alcohol containers will be legally allowed on the AC Boardwalk. An open container bar crawl was held at 1pm starting at Bourre on NY Avenue to commemorate the historic moment (legal booze on the boards).

The experiment of permitting public consumption of alcoholic beverages on the Atlantic City Boardwalk is only a few days old, but lawmakers in Trenton approved a bill Tuesday that would make open containers a permanent fixture at the seaside resort.

The Assembly Budget Committee unanimously voted in favor of a bill allowing open containers in designated tourism zones in Atlantic City. The bill is scheduled for a vote by the full Assembly on Thursday.

Under the state legislation, sponsored by Assemblymen Vince Mazzeo and John Armato, both D-Atlantic, the Casino Reinvestment Development Authority will determine areas in Atlantic City’s Tourism District where open containers of alcohol can legally be consumed and carried.

ATLANTIC CITY — Contrary to popular belief, drinking alcoholic beverages on the world’s most famous Boardwalk was not legal — until now.

“This is another way for businesses in the Tourism District to promote themselves,” Mazzeo said, adding “the goal ... has been to make this a permanent law in an effort to continue revamping Atlantic City for a newer generation.”

Other high-profile tourist destinations, such as Las Vegas and New Orleans, permit public drinking by adults of legal age in controlled areas.

Armato said the Atlantic City Boardwalk “makes it easy” for someone to move between casinos, bars and restaurants, but if they do so with an open container of alcohol, they can be issued a citation, with penalties that include fines, community service or jail.

“This practice is becoming outdated as more cities across the nation are relaxing liquor laws in tourist areas,” Armato said. “It’s time we revamp Atlantic City’s own laws to match this trend while continuing to keep the tourism area a safe and welcoming place to visit.”

Restaurants gearing up for outdoor dining

City officials, business owners and Atlantic County’s state representatives have been trying to implement an open container law for several years in an effort to create a more tourism-friendly Atlantic City. Last December, City Council narrowly approved a resolution urging the state Legislature to act on a bill that would permit open alcohol containers in certain areas of the city.

Similar legislation has been introduced in prior years and cleared committees, but never made it to a full vote of the state Legislature.

State Sen. Chris Brown, R-Atlantic, reintroduced companion legislation in February. The bill has been referred to the Senate Law and Public Safety Committee.

Local officials were confident the legislation introduced early this year would have been approved before Memorial Day, but COVID-19 caused a drastic shift in priorities.

LISTEN: Are open containers on the Boardwalk a game changer for Atlantic City?

State emergency and public health orders issued by Murphy in response to the coronavirus provided an opportunity for the city to issue the temporary measure, according to officials.

“We’ve been supportive of open containers for years,” said Michael Chait, president of the Greater Atlantic City Chamber. “We brought (the topic) up during the Atlantic City policy group meeting this year and requested that the city act as quickly as possible.”

The city’s gaming industry has supported efforts to legalize open containers at the state level for several years as well.

During the mayor’s news conference to announce the temporary order, Steve Callender, president of the Casino Association of New Jersey and senior vice president of Eastern regional operations for Tropicana Atlantic City’s parent company, Eldorado Resorts, said it was a “great first step.”

“Hopefully, as we go through this process, people that make decisions can see that we handle it properly,” Callender said last week. “We do it the right way, and we follow all the rules, so that we can make it permanent in the future. It’s great for our community.”

ATLANTIC CITY — JaVonn Parrish was smiling from ear to ear (behind his mask, of course) while stocking the to-go bar Friday afternoon at Bourr…

CAPE MAY — City Council on Thursday approved allowing the consumption of alcohol in several areas of town, including the beach, the Washington…