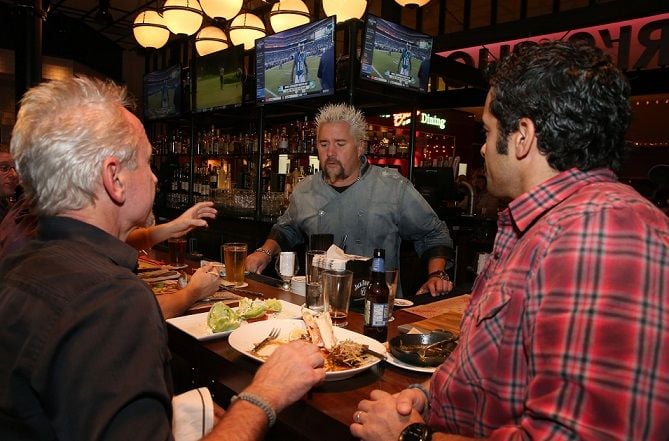 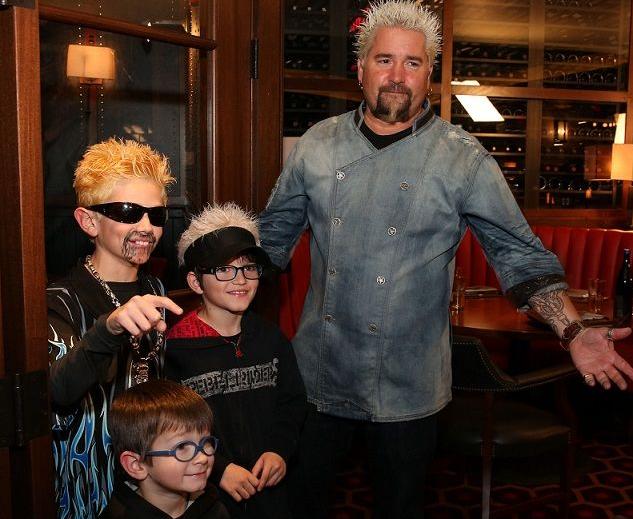 Guy Fieri is in town to check out — and promote — his new chophouse at Bally’s Atlantic City, but he also wants to spread the love.

The star of the Food Network’s “Diners, Drive-Ins and Dives” is undoubtedly impressed by his new multi-million-dollar Guy Fieri’s Chophouse, one of the city’s biggest success stories of 2014 that blends Fieri’s more casual style of dining with some upscale fare, but he is also impressed by the caliber of food South Jersey has to offer.

That’s why he’s pulling his signature red ’67 Camaro convertible up to six local restaurants to film segments for his show — which he calls “Triple D” — the Food Network’s No. 1 program after 19 seasons.

“Doing a little Triple D,” Fieri said at a media reception at the chophouse before posing with fans, including some impersonators and a couple who got engaged in the restaurant on Monday. “I have said it a bunch. I don’t think the Atlantic City area and the South Jersey area really get the reputation it deserves for having great food. You have a really eclectic mix of people who live here. (The restaurants are) old school, new school, ethnic — a nice variety — and great seafood!”

Fieri spent Monday and Tuesday filming future episodes of the foodie hit, which debuted in 2007, at The Anchorage Tavern Restaurant, a Somers Point institution known for its fresh seafood and homemade mozzarella sticks; the Grilled Cheese & Crab Cake Co., another Somers Point restaurant that lives up to its name and also makes great crab bisque; Carluccio’s Coal Fired Pizza in Northfield, known for its coal-fired and thin, Sicilian-style pizza as well as coal-fired wings and fresh pasta; Kelsey & Kim’s Southern Café in Atlantic City, offering superb soul food; Ernest & Son Meat Market, an old-fashioned butcher shop in Brigantine that makes its own sausages and delicious sandwiches; and the Oyster Creek Restaurant and Boat Bar, a legendary seafood shack in Leeds Point.

Social media sites were buzzing with photos of Fieri and his car, as well as crew members from the show at the various restaurants. And Fieri had nothing but kudos for everywhere he sampled.

Is it an underrated food area?

“Without question,” Fieri said. “Every time I come here I eat at White House, which I still recommend. Right down the street, Kelsey and Kim’s is a great Southern joint. Out in Leeds Point, Oyster Creek, here you have a place around for 40 years and you might look at it and say, ‘Ah, it’s a seafood shack,’ but they are doing real food.”

Fieri said all of this road travel makes it tough being away from his family, but helping restaurants is worth it.

“The rewarding factor of having a chance to highlight these places — most of them are mom and pop places — it makes an impact of a lifetime,” Fieri said. “I call it winning the restaurant lottery when you get a chance to be highlighted on Triple D because Triple D has the greatest fans. They are loyal and they come and they show up. I tell (the restaurants): Don’t squander the opportunity; once you have done the show, be ready for it.”

The chef, who has restaurants all around the country including California, Baltimore and Las Vegas, said he wanted a restaurant in A.C. for a long time.

“I remember the first time I came to A.C., it reminded me of old Las Vegas, not being that old but it’s small, it’s quaint, you have the Boardwalk and there’s just such a good energy,” he said. “I remember my buddy Sammy Hagar used to have a place on the beach — Sammy’s Beach Bar — and I was just so jealous thinking, ‘Oh, that’s the coolest place. He’s so lucky to have that.’ And to think it all finally has come full circle and we are now here — and not just here but here with a real presence. This is an amazing restaurant, an amazing team, an out of bounds menu.”

Fieri said he wants to become a familiar face in A.C.

Guy Fieri's is more than just a Chophouse

Guy Fieri's is much more than just a Chophouse

1 You’ll find unique concoctions. Guy Fieri and his people must have had a lot of fun coming…

Feeling artsy? Fuel your artistic side with our gallery, museum and class listings

EGG HARBOR TOWNSHIP — The airport is becoming the ad-port.

Academy of Culinary Arts making do with fewer students

Even as casinos close along the Boardwalk, raising concerns about the future, a trio of casi…

Do dinner AND dancing at Martorano's at Harrah's

1 Street kid does good. Steve Martorano was raised on the streets of South Philly in a famil…

The wait is over. Episodes of The Food Network's "Diners, Drive-Ins and Dives" showcasing South Jersey restaurants are getting some air time.

They may be oldies, but Food Network's Guy Fieri thought two South Jersey restaurant staples were good enough to make it on Friday night's new…

More proof is surfacing that famed chef, author and television personality Anthony Bourdain and a film crew are in the Atlantic City area.

Carluccio's and Grilled Cheese Crab Cake Co. may get their Food Network moment

The Food Network’s “Diners, Drive-Ins and Dives” is planning on showing off two more South Jersey restaurants in March.

The final batch of Food Network episodes of “Diners, Drive-Ins and Dives” featuring three local restaurants will debut over the next few weeks…

There are rumors that Guy Fieri is back in South Jersey, touring his signature red Camaro to other eateries for future episodes of "Diners, Dr…

Piccini in O.C. on 'Diners, Drive-Ins and Dives' Friday

If you ask Dave Cates why he thinks his restaurant will be featured in a Dec. 18 episode of “Diners, Drive-Ins and Dives,” he’ll tell you he d…