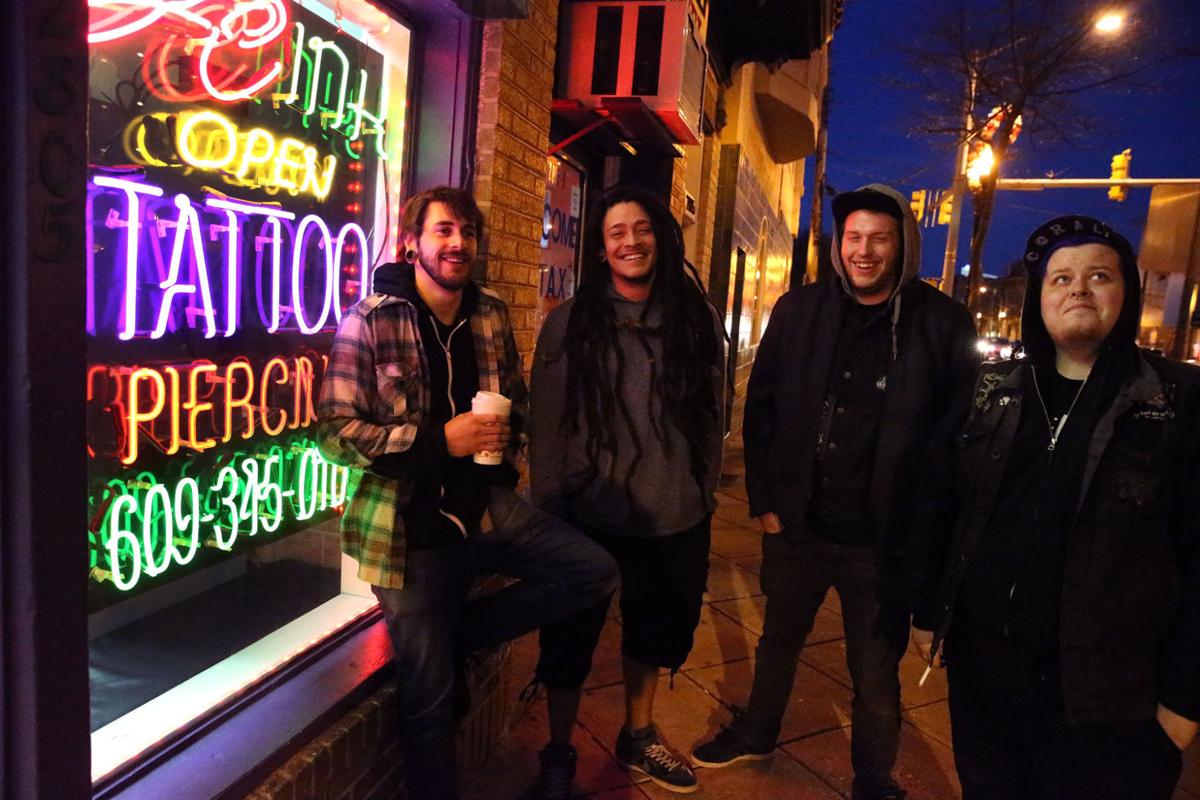 Members of the punk band No Comply, Rob Albert, left, of Mays Landing, and Jay Ramirez, Jim Chivalette and Johnny Hurden, all of Atlantic City, hang at the AC Ink Tattoo Studio. 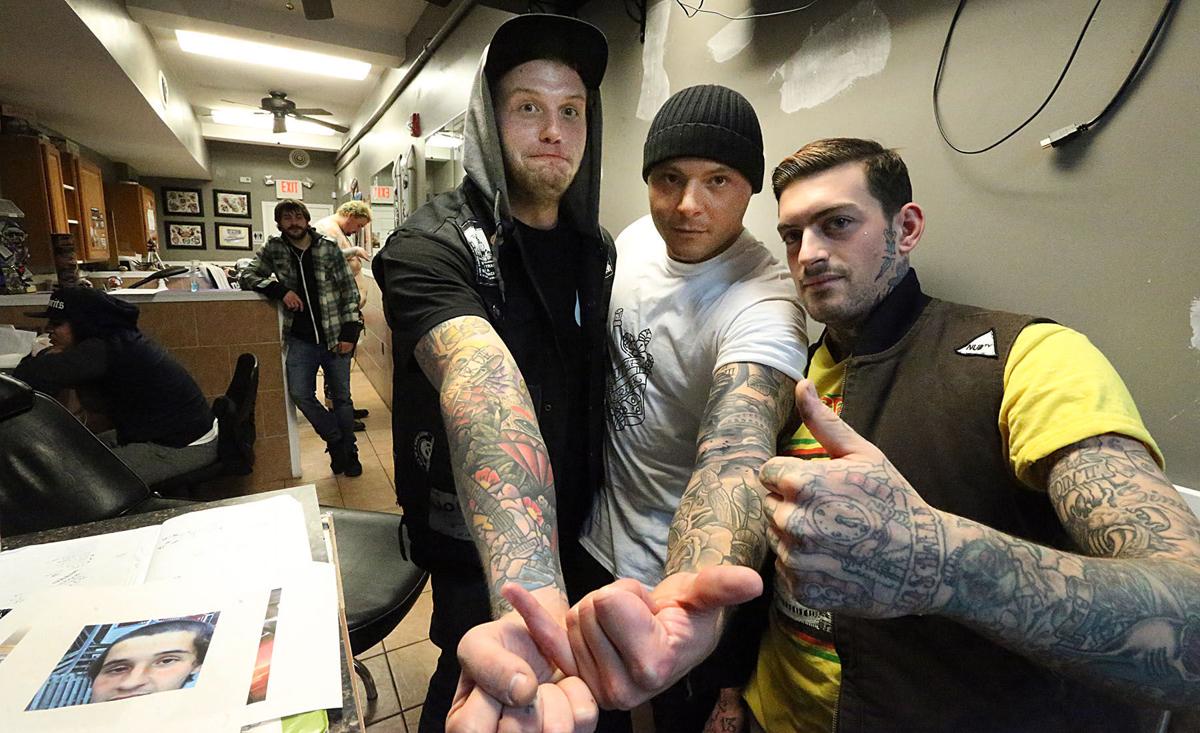 Members of the punk band No Comply, Rob Albert, left, of Mays Landing, and Jay Ramirez, Jim Chivalette and Johnny Hurden, all of Atlantic City, hang at the AC Ink Tattoo Studio.

Depending on who you ask, Atlantic City’s punk scene is either coming back or on the decline. One thing that is certain — punk never dies.

“It can’t be killed. Punks are like cockroaches,” joked Johnny Hurden, vocalist and guitarist for the Atlantic City-based punk band No Comply. “You just gotta’ look for it, it’s not in your face anymore like it used to be.”

In the back room of a local tattoo shop, No Comply vocalist and guitarist Jim Chivalette, drummer Rob Albert, bassist Jay Ramirez and Hurden talk about what’s on the horizon for punk.

“I think it’s going to come back big time. I feel like a lot of dub step, electronic music is being pushed down people’s throats,” Hurden said. “Especially kids.”

Erik Fischetti, who No Comply jokes is the band’s “unofficial member” and the force behind Atlantic City Crust Instagram, said the city’s patchwork of beaches, casinos, urban life and tourism influences the city’s unique punk sound and culture.

“It’s a culture unlike anywhere else” Fischetti said. “It’s a product of their environment and a different style than most bands you’ll hear.”

In Atlantic City, punk has been a way of pushing back at the decadence of casino club scenes.

“To the punk rock community, as far as you could get away from (cover bands and lounge acts) the better you were and happier you were,” said Brandon Smith, guitarist and vocalist of the Brandon Smith Band who grew up in Rio Grande and has been playing in the South Jersey punk scene since he was 10 years old.

In the chasm caused by the collapse of the city’s casinos, bands like No Comply and Fischetti say they’ve watched their parents’ lose their jobs and drugs grip the lives of their friends. Hurden said they all live off of the casinos, one way or another.

Local punk has a lot to push against, but the scene has its struggles.

Both Smith and No Comply embrace the “DIY” punk ethic, which Smith said gives him more autonomy and creative control over producing his own music. But DIY also means footing your own bill.

Chivalette said the founder of the former 1787 Collective, Paul Brown, carried the scene on his back for years.

Brown would often use his own money to put on shows. Faced with waning support from showgoers, who would at times balk at cover charges that help bands, Brown lost faith in the scene.

“Bands would start doing really well in this area, I would put them on shows and foster their creativity,” he said. “It was getting more and more difficult to get bands to stick around. From bands just being tardy, to simply cancelling shows, to breaking up, no matter what anybody says — in my opinion — a good foundation of a local music scene is the local bands.”

Brown is no stranger to marketing. The 33-year-old works for Good Time Tricycle, which organizes Atlantic City Beer & Music Festival, among others, and had been producing punk shows in the city since he was 15.

1787 booked primarily at the Boneyard, one of the few, if not only, venues left in the city where music like punk can thrive.

“It was impossible to sustain a culture when there was only one venue doing things,” he said, noting that the lack of venues, organization and excitement from showgoers can be a “volatile mixture.”

It wasn’t always that way. Brown said at one time Atlantic City’s independent music scene, even extending outside the city, was rivaling Asbury Park’s.

In spite of what might seem like doom-and-gloom prospects, Brown is optimistic Stockton University’s new campus will bring young college students to the city who will want to get out of their dorms to check out new music. He wants to see coffee shops, book shops, record stores and new venues popping up in the city.

“I don’t want there to be one venue in Atlantic City to carry the weight on their shoulders, and when it’s not doing phenomenally, everyone is like, ‘Oh, the scene is dead!’” he said.

Noranne Thompson, co-owner of NorStep Productions, primarily promotes and books shows out of the Boneyard. In the past few months, she said they’ve been booking more punk shows.

“It’s something I really enjoy. The energy is amazing — it’s beautiful,” she said. “There’s definitely people who are very supportive, who come out to almost every show. It’s not as great as it should be, or could be, but we’re working on that.”

Brown still has an “undying love” for the entire culture. He even had a “bit of an itch” to come back and said there’s a possibility he could put on one big show a month.

“When you grow up and mature in that world of independent music — it sticks with you forever no matter how far you pull away from it,” he said.

Brown thinks kids need to start playing in bands, “especially if they suck.”

“Some of the best punk bands sucked at music, but people loved them because that’s the culture,” he said. Brown also thinks the “slactivist” generation needs to step away from their computers and stop focusing so much on social media, unless it’s to spread the word about a show.

Smith said he’d like to see punk going back to being more personal, instead of just posting on Facebook.

“It would be great if there was an Atlantic City renaissance, it sounds really poetic,” Hurden said. “I hope it happens.”

As punk and politics are often intertwined, Hurden said there will always be people trying to express themselves creatively in the face of oppression.

There’s plenty to look forward to in the future.

Chivalette said with a smile: “I hope Donald gives us some good writing material.”

Listen to local punk bands, No Comply and The Brandon Smith Band at: facebook.com/NoComplyNj facebook.com/BrandonSmithBand

Expect a lot of rain, wind through Tuesday, but not another Jonas

While South Jersey was shrouded in fog Saturday, the day was at least free of steady rain and gusty winds. something I can’t say for the next …

Tom Flynn is confident he wouldn’t give up this life — his sobriety — for anything in the world.

The Atlantic City Beer and Music Festival comes back to the resort in one month, and the celebration is on its way to win a 1st place accolade…

It was love at first batch for Amanda Cardinali.