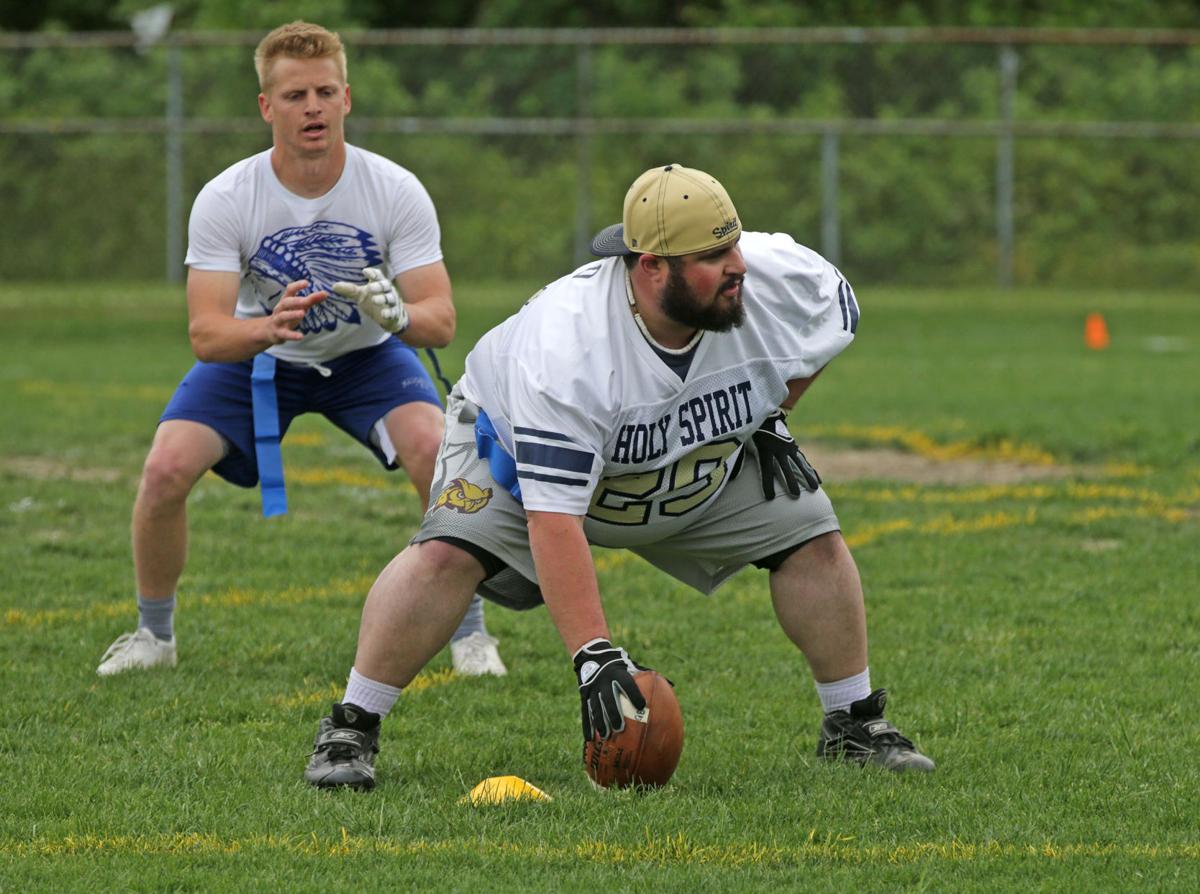 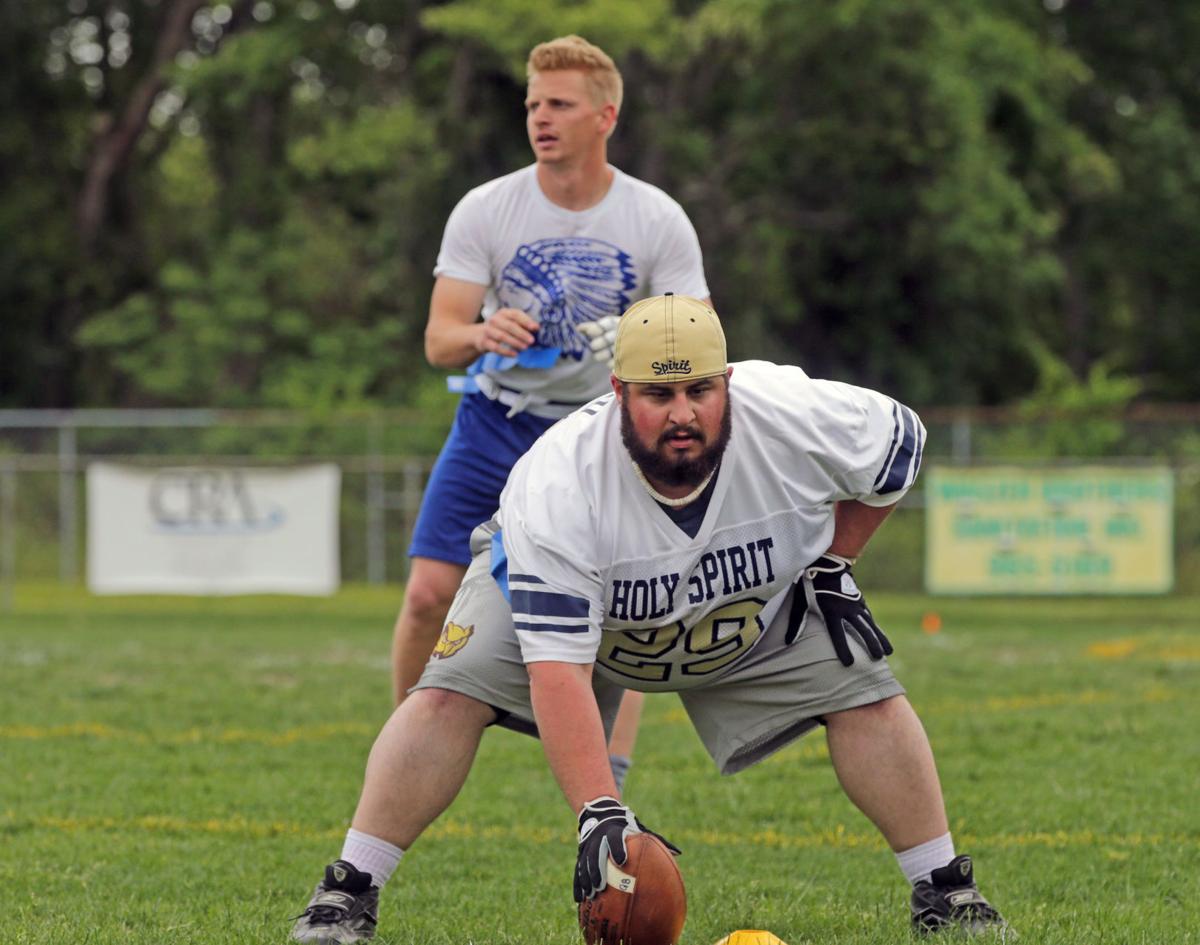 John Russo, playing center at a May 20 flag-football tournament to help his former Holy Spirit coach, Bill Walsh, used to hate when a smiling Walsh would greet his exhausted team, saying, ‘It’s a beautiful day to be alive.’ Russo has come to understand what Walsh meant. 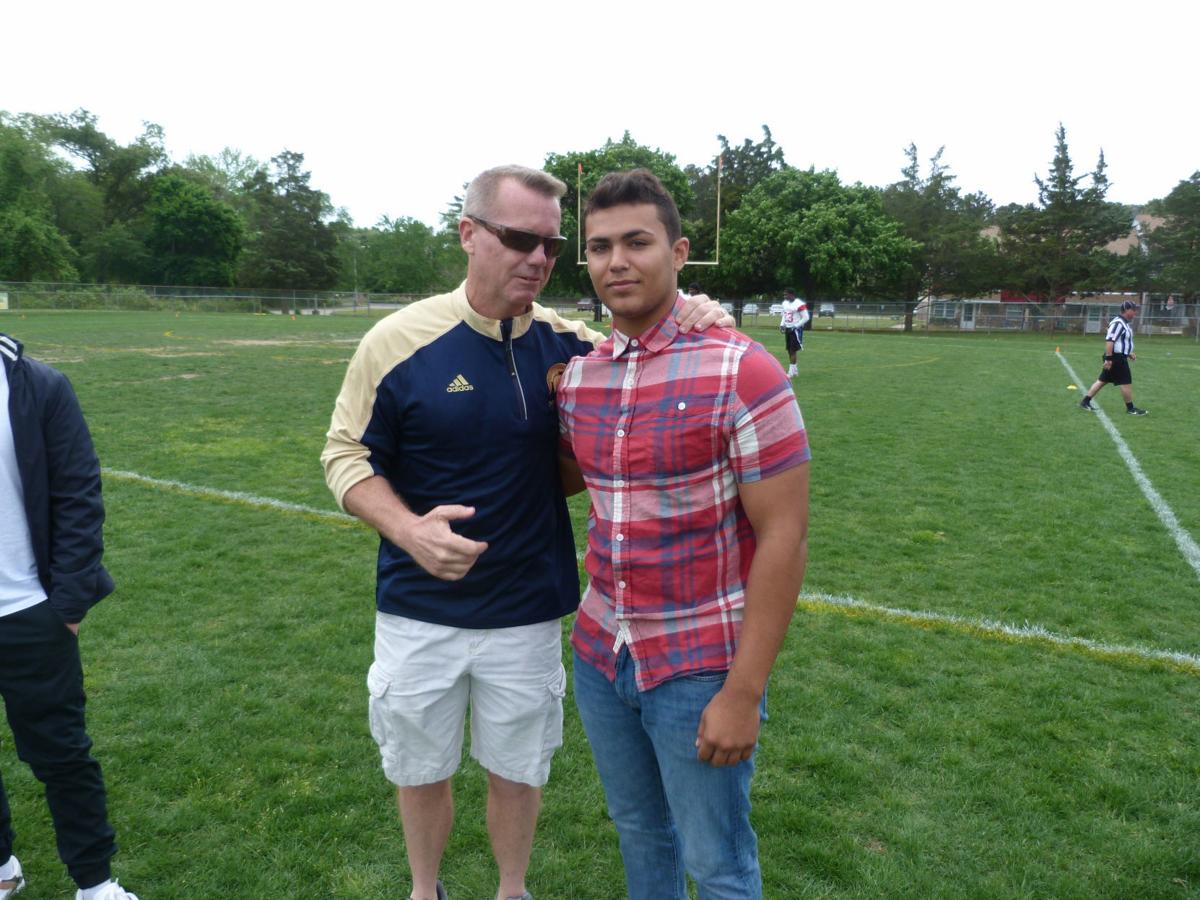 John Russo, playing center at a May 20 flag-football tournament to help his former Holy Spirit coach, Bill Walsh, used to hate when a smiling Walsh would greet his exhausted team, saying, ‘It’s a beautiful day to be alive.’ Russo has come to understand what Walsh meant.

I can still remember those muggy days in August over a decade ago.

The grassy patch along Route 9 in front of Holy Spirit High School that served as our practice field was dry and dusty. In the morning, gnats would nip at our ankles.

We were sore from the previous day’s work and not even awake yet from our 6 a.m. alarms. Surely, the upcoming day wasn’t going to be any easier for the 70-plus football players.

But then, our head coach, Bill Walsh, strutted out to the field with his laminated list of plays tucked into his shorts. He had this big smile on his face, a jarring sight to a bunch of exhausted teenagers. Man, we hated that.

“It’s a beautiful day to be alive.” Those words still hang with me today.

Because, looking back, Walshy was right.

I found out in March that our former head coach was diagnosed with amyotrophic lateral sclerosis, or simply ALS, also known as Lou Gehrig’s disease. It’s an incurable disease that kills neurons, which control our voluntary muscles.

That’s why “Walshy’s Warriors” was created almost immediately by a few older alumni.

On May 20, more than 200 Holy Spirit alumni, including former players Walsh coached, and friends and others within the community, signed up to play in the Bill Walsh’s Past, Present and Future Alumni 7 on 7 Flag Football Tournament. All proceeds, an estimated $20,000, plus other donations gathered by the group, are going toward helping the Walsh family make the last few years of Coach’s life as easy as possible.

Because it won’t be easy.

Walsh’s speech is already audibly affected, and he seemed tired that morning. But he still works out every day, remains active and will again be one of A.J. Russo’s assistant coaches this football season. The one thing Walshy refuses to do is feel sorry for himself.

That’s the lesson he taught us as misguided teenagers over a decade ago.

He saw how miserable we looked those mornings. He knew we were feeling sorry for ourselves. And every time it was noticeable, he told us about a story he read in the news.

Someone lost their house to a fire, or someone had to overcome a difficult time in their life. We had a classmate battling cancer while in high school as well, and though she passed a few years after we graduated, her fight motivated us. All of those people faced their hardships with bravery, and it’s exactly what Walshy is doing now.

Before and during the flag football tournament, hundreds walked up to Walshy just to see how he was doing. He lit up, remembering our aged faces, most covered in some form of facial hair, which was not allowed at Holy Spirit when we were teenagers.

I had to ask Walshy one simple question — why? Why was that his philosophy? Why did he care about so much more than just the X’s and O’s?

“So many people have way more issues than we have,” he said. “So we should be fortunate, and that’s how we should approach every day.”

He then took a moment and thought about how special it was to see all of those faces supporting their coach, or just supporting a person who left a permanent impression on their friends.

“It’s humbling, very humbling,” Walshy said, fighting back tears before straightening back up and going back to being his usual, upbeat self.

Here I am now, almost 29 years old, and in the days removed from playing flag football, I felt sore. I used muscles I had forgotten I had. I’m vastly out of shape and well above what I weighed in high school.

I’m working in a tough and likely dying newspaper industry. I have wedding expenses piling up and owe more money than I own. But I don’t feel sorry for myself.

There is always someone out there who is less fortunate than I. And when life gets tough, you have to deal with it.

That’s what we all learned from Walshy.

That day left us all with smiles on our faces. Because we knew that we were giving back to the man who gave so much to us.

LBI gears up for sauces and suds with Hop Sauce Festival

A flock of foodies expected for A.C. Food Truck Festival

ATLANTIC CITY — Something is special about ordering from a food truck.

"Camp David North" is a little over the top: Off the Clock

I’ve never been to the White House, but I have been to “Camp David North.”

Bill Walsh's No. 16 will live on at Holy Spirit: McGarry

Despite illness, Bill Walsh is still a presence at Holy Spirit

ABSECON — Kelly Walsh feels close to her dad, Bill, when she walks the hallways of Holy Spirit High School.

I graduated from Rowan University in 2011 where I studied journalism. I covered local high school and college sports at the South Jersey Times and Vineland Daily Journal. I have been a sports reporter with The Press since July of 2013