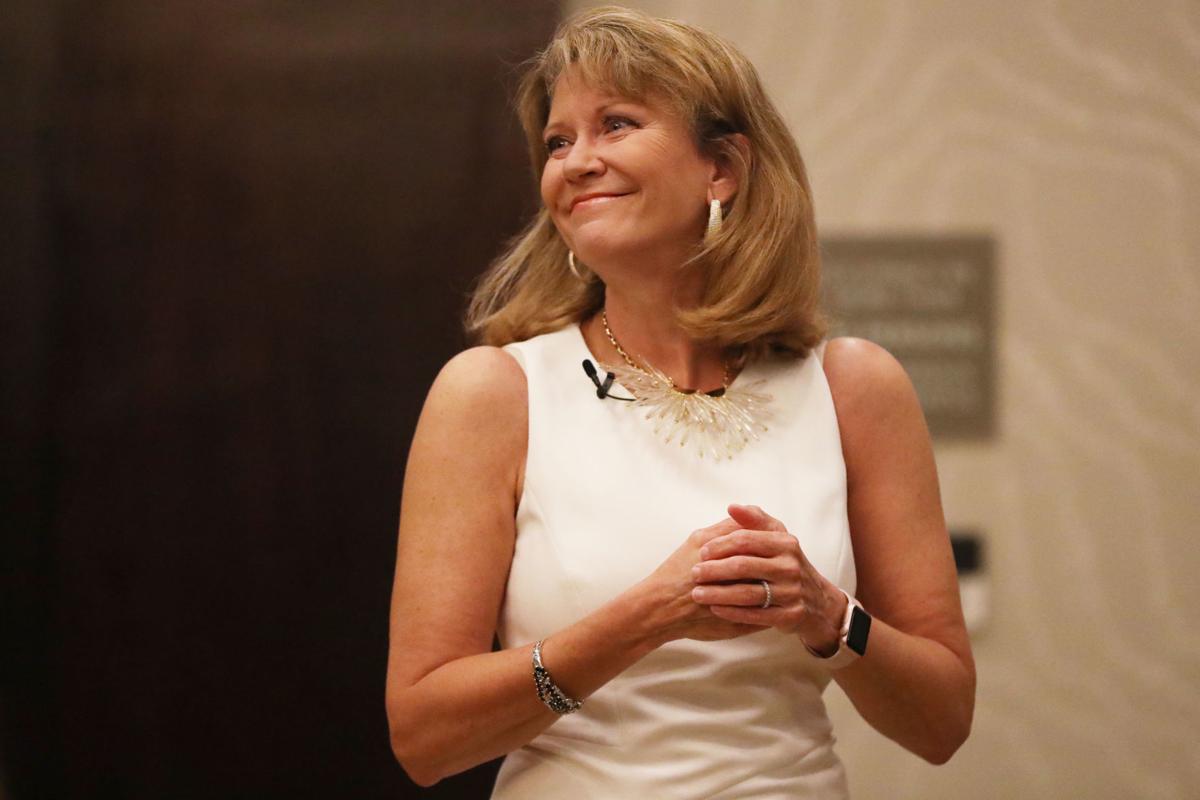 Charles Suzette Charles, a native of Mays Landing who was Miss America 1984 after the resignation of Vanessa Williams, now lives in Manhattan.

A divide has emerged within the Miss America Organization between state pageant officials and former winners over its current leadership.

Representatives from 22 state pageants, including New Jersey, have signed a petition calling for the immediate resignations of the entire Miss America Organization Board of Trustees, including Chairwoman Gretchen Carlson and President and CEO Regina Hopper.

Meanwhile, another letter, provided to The Press of Atlantic City on Saturday and signed by 30 former Miss Americas, said they “fully support Gretchen Carlson, Debbye Turner, Heather French Henry and our unified board who are and have been working tirelessly to move our program forward. We hope that the voices of our majority can and will be heard.”

The petition expresses a vote of “no confidence” in the MAO’s Board of Trustees and Hopper, citing a lack of transparency and adherence to best practices.

“As dedicated members of our state and local communities who lend our reputations, financial support and voluntary efforts to facilitate MAO’s long and powerful mission of empowering women to stand up and speak out, we find ourselves needing to use our own voices of leadership to express our profound disappointment regarding what, in our view, is the failed leadership of the entire MAO Board of Trustees led by Ms. Gretchen Carlson as its chair and Ms. Regina Hopper as its President and CEO,” said a petition circulated online and provided to The Press. 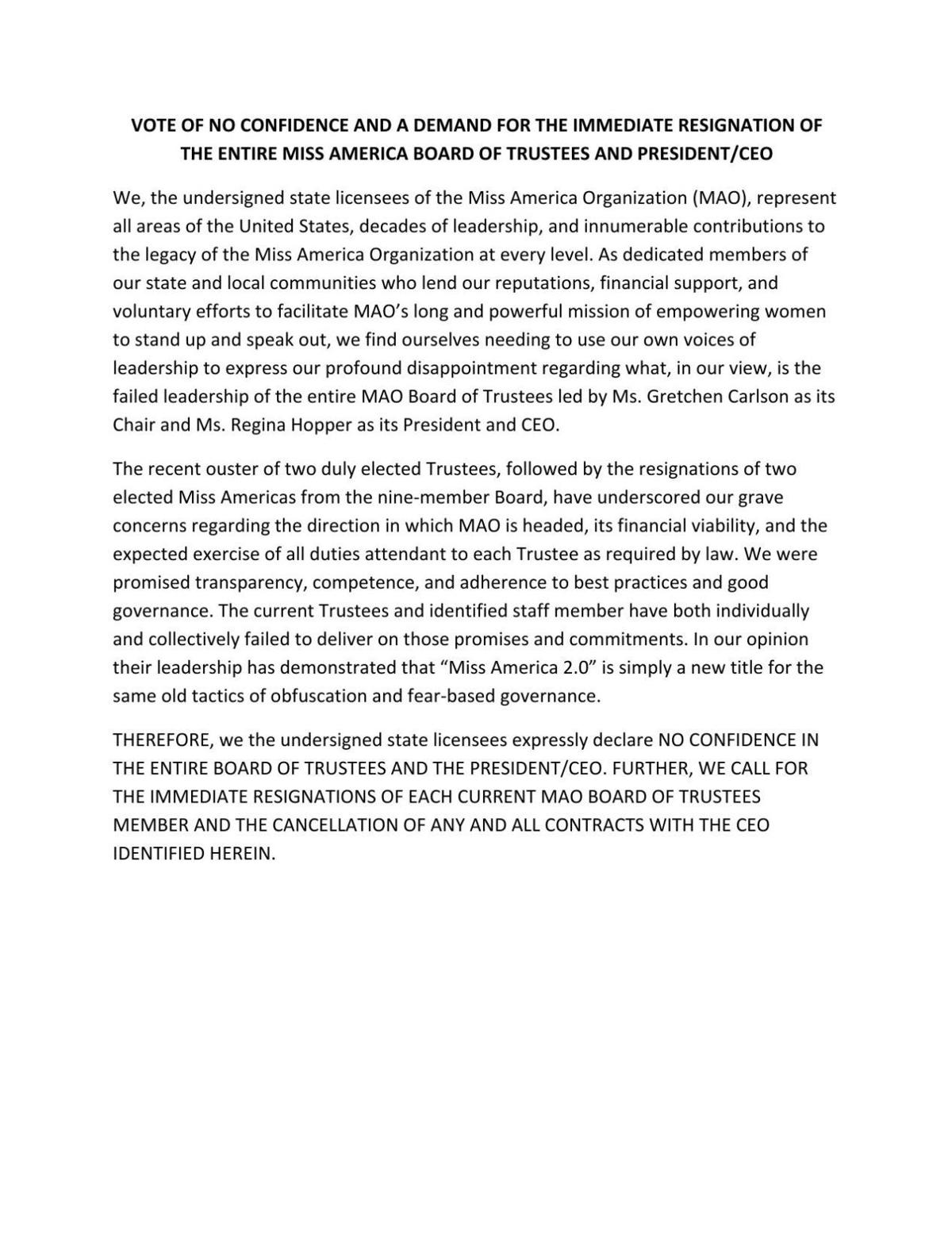 Sally Johnston, executive director of the Miss New Jersey Education Foundation, is listed as signing the petition. She could not be reached for comment Friday night.

“On behalf of the Miss America Organization, in any transition, there are are always those who disagree with or find it hard to accept change. We welcome those who want to move forward and be a part of a revitalized program dedicated to providing scholarships and opportunities to all young women,” she said.

Look back at Miss America 1922

Look back at Miss America 1922

Look back at Miss America 1965

Look back at Miss America 1965

Look back at Miss America 1924

The Miss Georgia pageant, which was one of the states to sign, posted the petition on its Facebook page with a lengthy response: “We are constantly forced to decide whether to stay quiet in the face of organizational dysfunction, because we have collectively dedicated hundreds of years of service to the program. We love the ways in which we have seen Miss America impact the lives of the women of our program. We do not want to be ostracized.”

The new leadership of the Miss America Organization has gone through several changes recently. In June, MAO announced the election of three new board members, following the resignations of Jennifer Vaden Barth and Valerie Crooker Clemens. Both Barth and Clemens were former state titleholders, representing the Miss America State Title Holders Association since February.

Changes with Miss America cause issues among board members

According to Carlson, it was explained to state pageant directors and former state titleholders that Barth’s and Clemens’ positions on the board were always temporary and both signed letters of resignation when they were seated. The two would then step down from the board after the launch of the “Miss America 2.0” initiative.

Barth disputed that, taking to social media and releasing a joint statement with Clemens saying their resignation letters were executed without their knowledge or consent and with no advance warning.

In the days following, board members and former Miss Americas Kate Shindle and Laura Kaeppler Fleiss also resigned, calling for those invested in the Miss America Organization to question the leadership.

Suzette Charles, Miss America 1984 and current MAO liaison to Atlantic City, said she can only speak for herself, but she has noticed issues arising within the organization.

“Things have started to unravel,” Charles said Friday night. “There’s been a lot of dismay with Gretchen’s leadership. We thought she would regard this program with reverence and keep this tradition alive.”

Since being elected chairwoman of the Board of Trustees of the Miss America Organization, fo…

Charles was unsure whether the new petition would have the same momentum as the one that led to the resignations of the previous leadership, but she supports the states that have signed.

“The local and state level are the community that brings the whole swell of the competition here to Atlantic City. So if there’s discourse and you don’t have participants, then how will you move forward?”

Not everyone happy with Miss America swimsuit decision

ATLANTIC CITY — As the tramcar passed Kennedy Plaza on the Boardwalk Wednesday afternoon, a …

The Miss America Organization says contestants have always been judged on personality, inter…

The following people are listed as signing the petition seeking the MAO leaders' resignations:

Nan Teninbaum on behalf of the Miss Alabama Pageant Inc.

Margo Fliss on behalf of the Miss Alaska Scholarship Foundation

Nakiya Troth on behalf of the Miss Connecticut Scholarship Organization

Keith Williams, chairman of the board and acting executive director on behalf of the Miss Florida Scholarship Pageant Inc.

Dewana Little on behalf of the Miss Louisiana Organization

W. David Blackledge on behalf of the Miss Mississippi Corp.

Jan Holden on behalf of the Miss Montana Scholarship Program

Jean Hatch on behalf of the Miss Utah Organization

Harlen Gudger on behalf of the Miss Virginia Organization

Peggy Miller on behalf of the Miss Washington Scholarship Organization

Jeanne Schmal on behalf of the Miss Wisconsin Pageant Inc.

The following former Miss Americas signed a letter in support of the current leadership, saying, "Our Board needs our support now more than ever with the focus being on the current young women and providing a positive experience for them in Atlantic City and for future generations to come.":

In 1951, Yolande Betbeze Fox roiled the Miss America Organization when, after winning the pageant, she refused to model a new line of bathing …

ATLANTIC CITY — History was made Wednesday morning in front of the bronze Miss America statue on the Boardwalk.

ATLANTIC CITY — When it comes to strengthening the ties between the Miss America Competition and Atlantic City, Suzette Charles has lots of ideas.

Answering questions ranging from the recent competition controversies to their personal projects including advocacy and politics, Board of Tru…

ATLANTIC CITY — Immediately following the crowning of Miss America 2019 next month, you can celebrate right along with her.

11 former Miss Americas call for Carlson, Hopper to step down

A day after Miss America chairwoman Gretchen Carlson said the organization needed to "have a healing process" amidst its ongoing drama, 11 for…