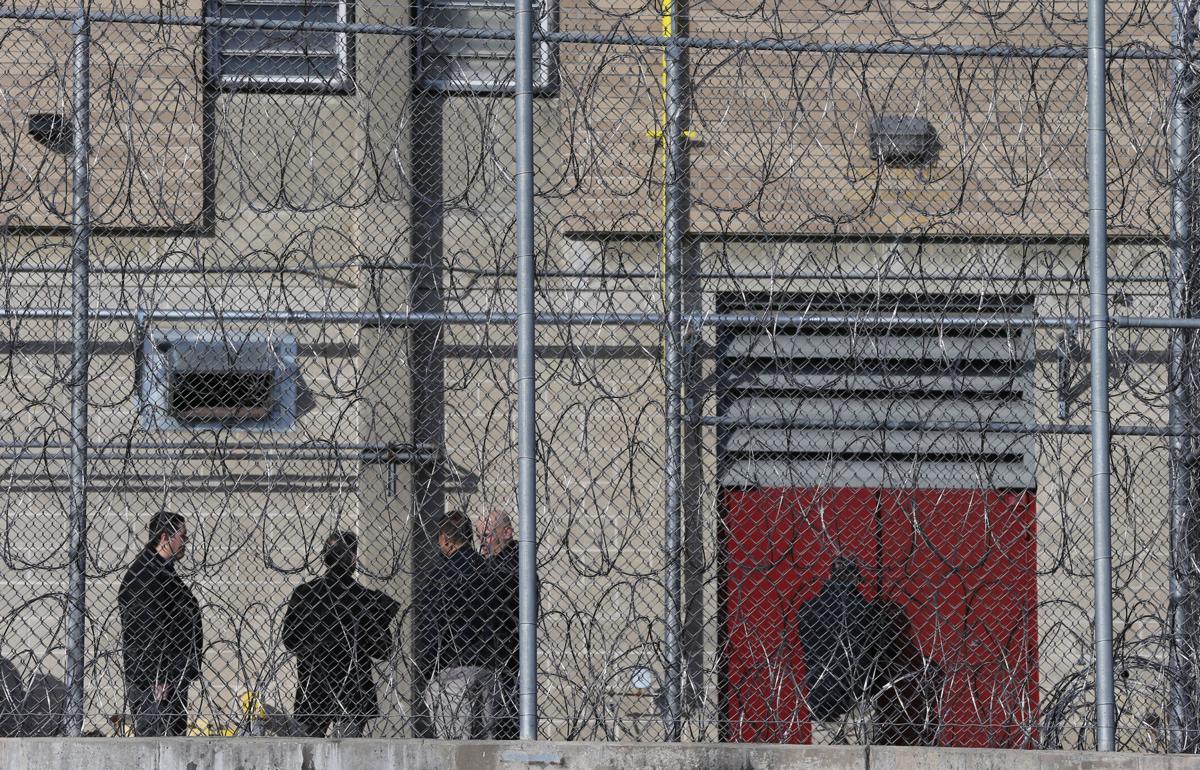 The Cumberland County jail is defending lawsuits filed by four other families of arrestees who died in custody since 2014. 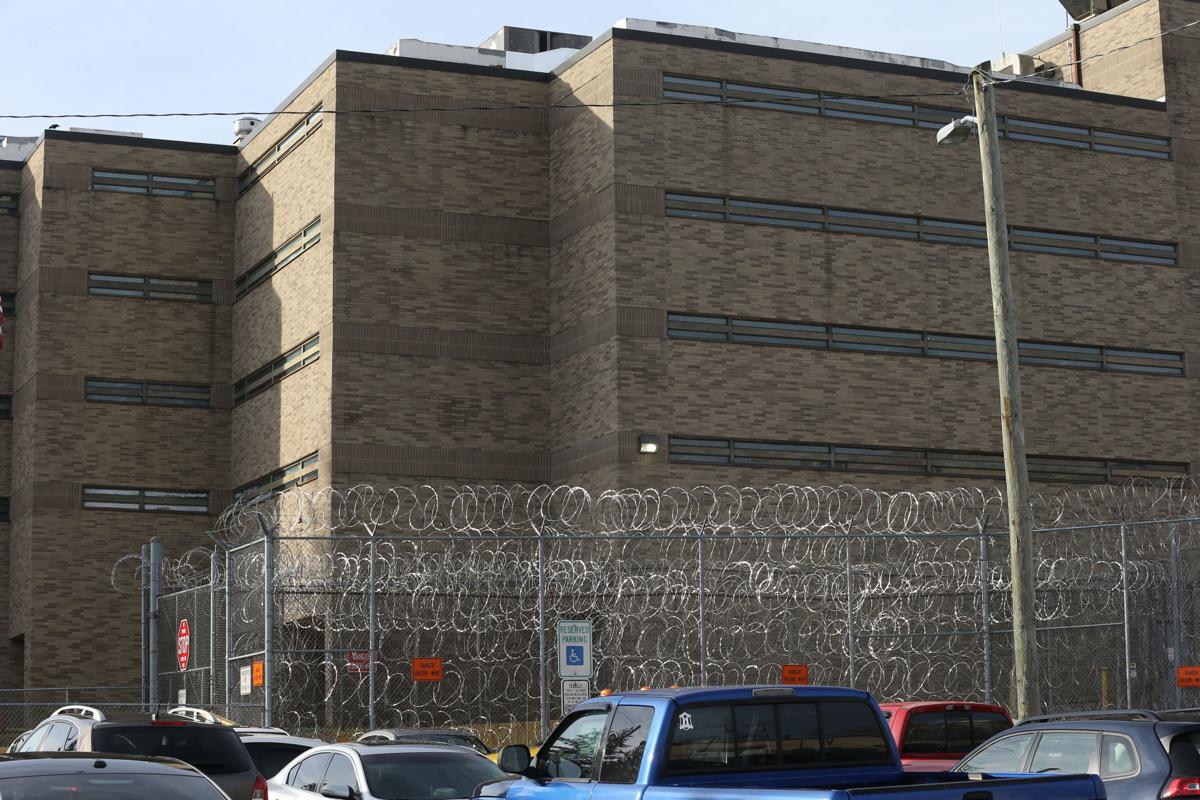 The lawsuits filed against the Cumberland County jail in the past five years. Jan. 11, 2017 (Craig Matthews / Staff Photographer)

The Cumberland County jail is defending lawsuits filed by four other families of arrestees who died in custody since 2014.

The lawsuits filed against the Cumberland County jail in the past five years. Jan. 11, 2017 (Craig Matthews / Staff Photographer)

Since it was implemented last year, criminal justice reform in New Jersey has been touted as a huge success that has bolstered a national discussion about basic fairness, public safety, and law and order as a whole.

But the new law has not come without flaws.

The Bail Reform and Speedy Trial Act celebrated its one-year anniversary last month. The reforms have been described by lawmakers and civil-rights activists as a more fair system that does not discriminate against the poor.

Since its implementation Jan. 1, 2017, the new process has reduced the population of pretrial inmates in jails across the state, which dropped 20.3 percent from 7,173 to 5,718, according to court records.

Keeping nonviolent offenders out of jail helps people keep their jobs and provide for their families, civil rights activists have argued, while having fewer prisoners overall saves local governments money in expenses for running jails.

“Some of these (nonviolent) defendants spent months or years in jail awaiting trial,” Judge Glenn Grant, acting administrative director of courts in New Jersey, said in a comprehensive review of the new law. “These systemic errors not only negatively affected the community, and increased jail costs for counties, but also were profoundly unfair.”

Cumberland County Prosecutor Jennifer Webb-McRae said the reforms are the biggest change she has seen in her 24-year career in criminal justice.

“It’s changed the way we do business,” she said, adding the county hired two more assistant prosecutors to help accommodate the new workload. “I believe in this process. No one should have to sit in jail because they are poor and can’t make bail.”

But the new law has had some unanticipated consequences, including the destruction of the bail-bonds industry and the rising costs of running prosecutor’s offices and pretrial services 24 hours a day. Critics of the reform also contend the new law increases the possibility that a dangerous person could be set free. 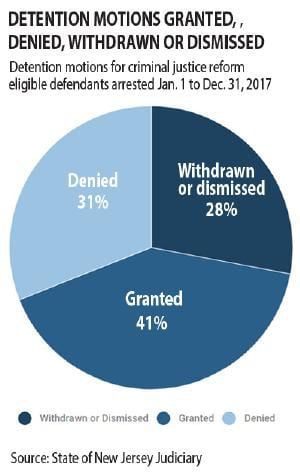 Chris Blaylock, a bondsman who owns EZ Bail Bonds in Turnersville, Gloucester County, said he has closed two of his three businesses in South Jersey and only gets customers for municipal warrants or old cases that date from before the reforms were implemented.

“It’s totally devastated the business because it’s virtually gotten rid of all monetary bail,” Blaylock said. “We expected that our business would fall about 40 percent because of the changes, but it’s been closer to 90 percent. We had no idea it would be to this extent.”

People arrested on a summons are taken to a police station, booked, issued charges and released.

People arrested on a warrant are taken to the county jail for as long as 48 hours until a decision is made by a judge on whether they will be kept or released.

That time frame can be extended if a defense attorney requests more time to prepare.

The decision to keep a defendant in jail is based in part on a new scanning system that brings up alleged offenders’ criminal histories and helps determine whether they are a risk to the community or a risk of fleeing before a court date.

The juvenile justice system and municipal courts are unaffected by the changes.

Monetary bail still can be imposed by judges for certain circumstances, such as offenders who miss their court dates, but Blaylock said he believes the judicial system has been reluctant to do that, and he has gotten virtually no business from people who are being held at county jails.

“They swung the pendulum too far on this. They didn’t have to destroy the entire industry,” Blaylock said of the new law.

“These were mom-and-pop places that were multigenerational businesses,” he said.

Others around the state, including Newark Mayor Ras Baraka, have said the new system is a risk to public safety.

On Feb. 6, a Newark man who was released twice under the new law on domestic violence charges shot and killed his ex-girlfriend. The man, Kareem Dawson, 31, shot himself to death when police came to arrest him for the slaying.

In a statement, Baraka said the law needs to be fully examined so a similar situation does not occur again, according to multiple reports.

“We can’t go on losing lives like this,” Baraka said in a statement. “We need to look at the downgrading of charges by prosecutors, especially in cases of domestic violence, and to fix the serious flaws in bail reform.”

Meanwhile, the law itself faces the possibility of collapse if more revenue is not brought in to sustain it, Grant pointed out in his report.

The law relies on funding from court fees instead of the state budget.

As of the beginning of this year, the judiciary was spending more on the program than it was collecting in fees and is expected to hit the wall within a year.

Because there is a 48-hour deadline to make a decision on whether an offender must stay in jail or be freed until trial, many counties have had to hire more staff in sheriff’s departments, prosecutor’s offices and courts.

Courts now must be open on weekends and holidays to adhere to this deadline.

Levinson expects those costs to rise in the coming years, and said he believes there could have been a safer and more cost-effective way to reduce the jail population in New Jersey.

“Catching and releasing is fine if you’re trout fishing, but it doesn’t work here,” Levinson said.

“Everyone is for reforming the bail system, but this is not working the way it was sold to the public.”

It has been a year since bail reform was implemented. It cut New Jersey's pretrial prisoner population 20 percent, but decimated bail bonds businesses and raised costs due to running prosecutor’s offices and pretrial services 24/7. Was reform a good idea?

Homicide has Hamilton Township neighbors worried about their safety

ATLANTIC CITY — Some people say schools are a reflection of their community, and for Atlanti…

Local Republicans are struggling to recruit big-name candidates to run for the congressional seat that will be vacated by U.S. Rep. Frank LoBi…

A suicide note left by James Kauffman in his cell at the Hudson County jail was addressed to his wife, Carol Weintraub, and attorneys, but is …

ATLANTIC CITY — When old-time customers come back to the Chelsea Pub on Morris Avenue, they will be greeted by a host of renovations but a sim…

NJ bail reform a success, but needs modifications and monitoring

New Jersey now has spent a full year leading the nation in bail reform. Throughout 2017, it no longer decided whether to release the accused b…