Kiera DeCanio and her boyfriend, Craige Werner, both of Brigantine, are greeted by President Barak Obama on Wednesday at the Brigantine Beach Community Center. 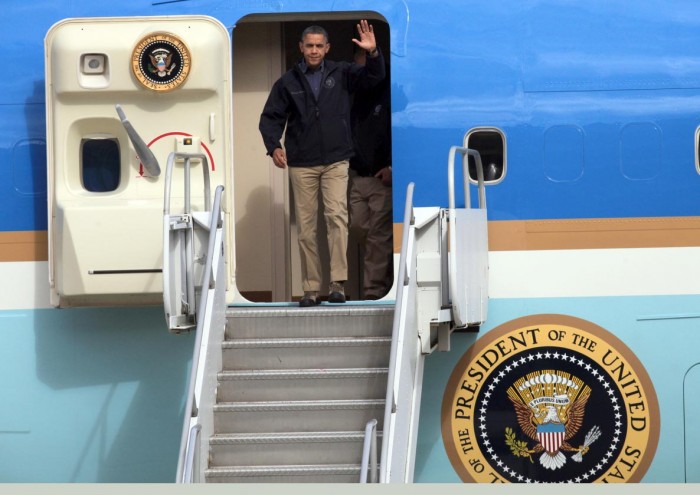 Kiera DeCanio and her boyfriend, Craige Werner, both of Brigantine, are greeted by President Barak Obama on Wednesday at the Brigantine Beach Community Center.

In the midst of storm devastation, Brigantine residents welcomed President Barack Obama on Wednesday, although some were of different minds on whether the time was well spent.

Obama landed on Air Force One at Atlantic City International Airport where he was greeted by Gov. Chris Christie. The two immediately boarded a presidential helicopter to tour the destruction along the South Jersey shoreline and later traveled by motorcade to Brigantine Beach Community Center where the president met with city residents who have been evacuated from their homes or affected by the storm, such as a shaken Melissa Inskip.

The 42-year-old mother had lost an entire floor of belongings to flooding and her backyard looked like a tornado had hit it. Concerned her home might not be salvageable, Inskip greeted the president’s visit with relief and hope.

“We’ve never been through something this bad,” she said. “I’m just focused on my family and thankful he was here.”

Outside the center were residents also touched the president took the time to visit Brigantine. But there were others — who stood outside for hours to catch a glimpse of the president and perhaps shake his hand — who said they came away with nothing more than chills from the more than four-hour wait.

They wondered whether the resources spent on hosting the president might have been better spent on the clean-up effort.

“It’s taking away from cleaning our streets and getting people on their land,” said Cindy Christos, of Brigantine.

She and her family initially had been excited about the visit, driving closer to where they might be able to catch a glimpse of the president and thinking it might take an hour out of their day rather than the time sink it became. Police had blocked 42nd Street, and once the Christos drove down the street, they were barred from leaving.

Also ordered to stay in the area was a five-men crew from Lafayette Construction in Absecon, who brought their dump trucks and other machinery, and said they were instructed to park the equipment in front of the community center in order to block line of sight into the building as the president walked in and out.

The crew — which included Brian Egan, Ron Salmon, Paul Perry and Michael Hicks — had spent the past two days working 18-hour shifts clearing debris from the north end of Brigantine where much of the storm devastation was concentrated. On Wednesday, after dropping off their equipment, the five were ordered to keep at least one block away from the center.

“I’m upset I didn’t get to shake his hand,” Babecki said of Obama.

It was from that perch that they began talking about all of the clean-up work they could have been doing had the president not visited.

“We could be down there moving dirt,” Salmon said.

Still, as the president’s motorcade pulled away, several waiting in the crowd pulled out their cell phones to video tape the procession. Others waiting farther away began chanting “Obama.”

As Obama’s motorcade made its way to the North Point Marina, residents who had been waiting for the president perked up.

“He’s on now,” Tim Tierney yelled from his porch on Hagen Place, where a group of residents and media waited hours for the presidential motorcade to pass by.

Tierney had the television on as CNN showed the president live from — just down the street.

Inside the marina, the president addressed a hand-picked crowd of reporters and observers where he resolved to help with the state’s recovery.

The president, who has signed a major disaster declaration for much of New Jersey, pledged to get the aid into the state. In fact, he arrived into the region with Federal Emergency Management Agency Administrator W. Craig Fugate, and a cadre of agency workers converged on the Brigantine community center after the president had left where they answered questions from storm victims and handed out contact information.

“Our main focus is on New Jersey, who got hit harder than anyone,” Obama said.

Inside the marina, Nicole Baerga, 15, was among those who shook the president’s hand.

“It was a good handshake,” the Atlantic City High School sophomore said. “His hand was warm. It was really cool.”

There was no photographic proof, she said, because cell phones weren’t allowed, but she had a shot of Obama getting into his car — or at least the open door and the Secret Service agent standing by it.

“I can’t believe you shook his hand,” her mother Delfina Baerga said as they walked home.

Obama had many praises for the rescue and recovery effort in Brigantine.

“When we were at the Community Center, there was a restaurant owner who, for the last 18 hours, has been cooking meals as part of the effort,” he said. “Some of the people were saying the food was better than what they ate at home.”

Christie also spoke and said he was glad no one died in Brigantine due to the storm.

“For all (the) people of Brigantine who disregarded my admonition, ‘Get the hell out of here,’ you are all forgiven this time,” he said.

U.S. Rep. Frank LoBiondo (R-2nd), who was among the many officials to greet the president at the airport, said he was glad Obama made the trip. U.S. senators Bob Menendez and Frank Lautenberg, both Democrats, also were in attendance in Brigantine, as were Atlantic County Executive Dennis Levinson and Brigantine Mayor Philip Guenther.

“This reinforces for the president it was the right thing to do to sign the declaration quickly, “ LoBiondo said.

A.C. has a long history of presidential visits