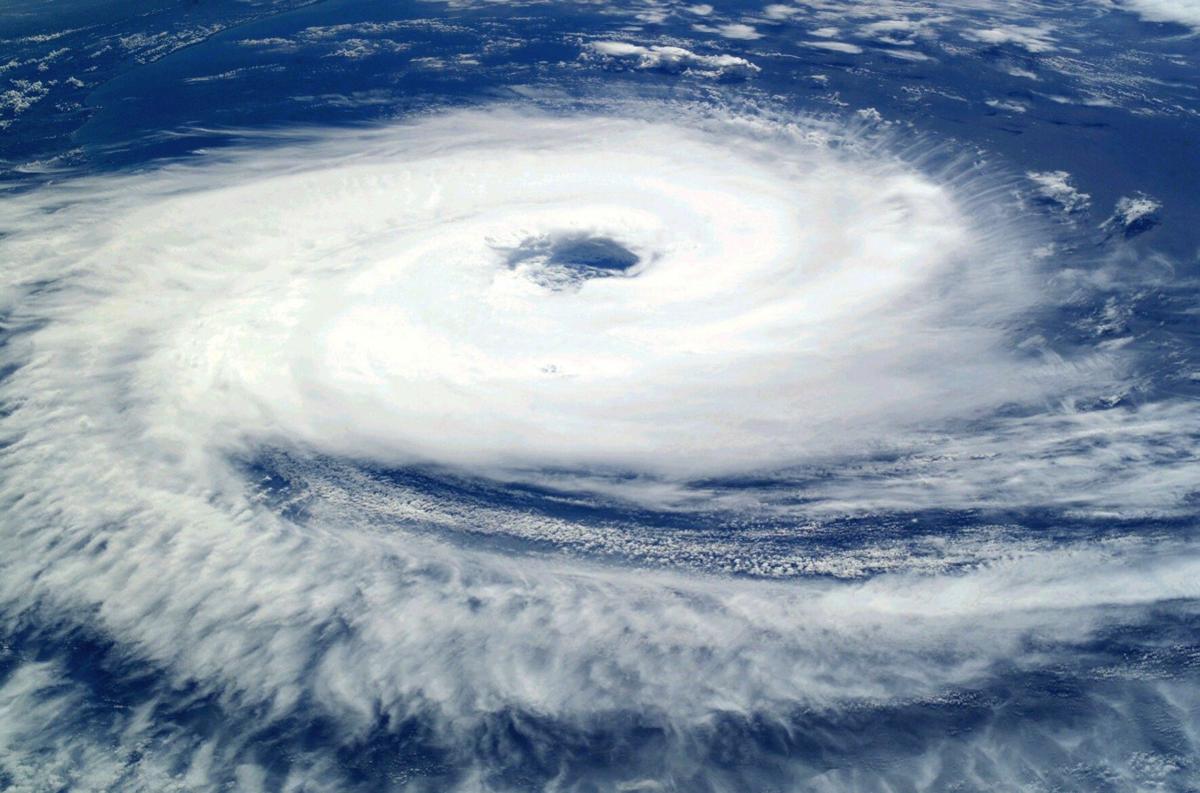 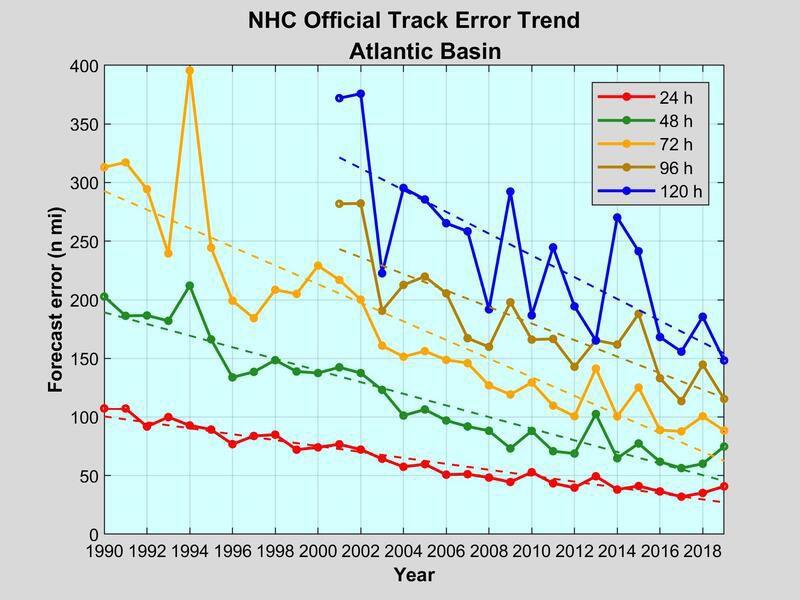 Official cone of uncertainty track over time in the Atlantic Hurricane basin. The margin for error has shrunk between a third to a half since 2005. 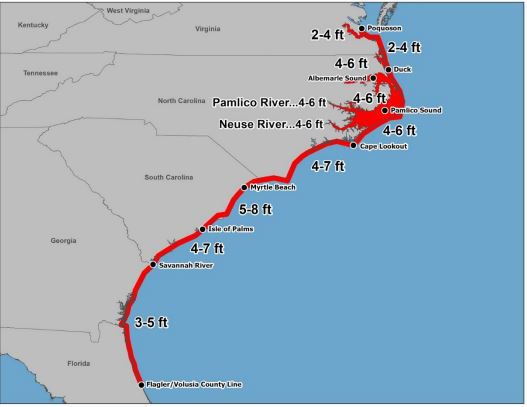 Tropical systems will now come with a forecasted storm surge graphic. Storm surge is the rise in sea level solely caused by a storm.

If Sandy were to occur in 2020, the National Hurricane Center would have an additional forecast point at 60 hours. The change "will provide better definition to the forecast path of the storm so users will no longer have to rely on visual linear interpolation if the 60 hour forecast is important to them," said Joe Miketta, Warning Coordination Meteorologist for the National Weather Service in Mount Holly. 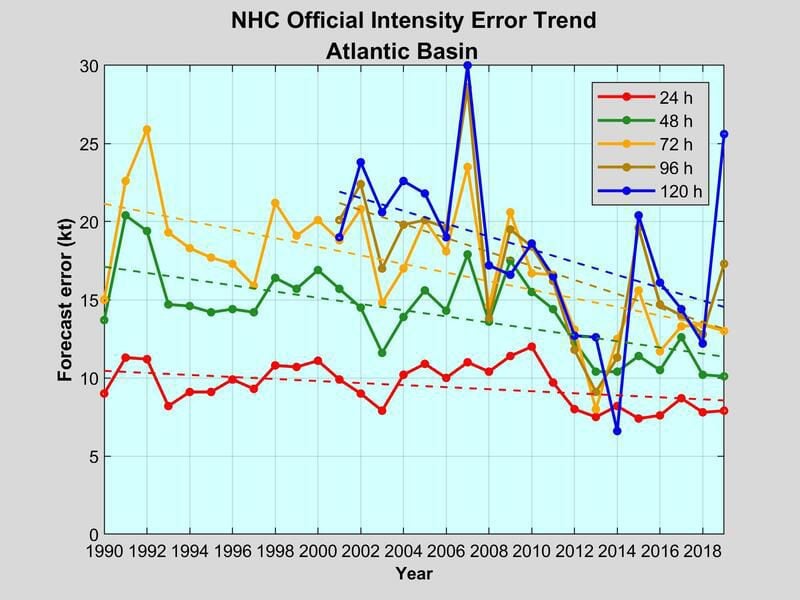 The National Hurricane Center has geared up for the 2020 hurricane season with four changes and improvements to the way it conducts business.

The inclusion of a 60-hour forecast between the existing 48- and 72-hour forecasts, an update to the track forecast cone and using local time for systems in the Eastern Atlantic are among the changes. Though there were two named storms in May, the season officially begins June 1 runs through Nov. 30.

However, South Jersey officials, both in and out of the meteorological community, agree on what the most impactful change will be.

“For us, I truly believe the storm surge inundation graphic will be extremely useful in our evacuation planning and will enable us to pinpoint where we will see the highest surge from an approaching storm system,” said Vince Jones, director of the Atlantic County Office of Emergency Management.

The addition of storm surge forecast graphic, which will represent the peak height the water could reach above normally dry ground, is an experimental product.

“This graphic will provide a reasonable worst-case scenario, and people can plan accordingly. And they don’t need to think about what datum is being used (such as mean lower low water or mean sea level) since this graphic represents depth of water above the ground,” said Joe Miketta, the warning coordination meteorologist at the National Weather Service in Mount Holly.

Miketta also agreed this was the most important of the four NHC updates.

The changes made for 2020 come after meetings among the NHC, based in Florida, and coastal, local National Weather Service offices, such as Mount Holly, which is responsible for all of the Jersey Shore.

“Changes in forecast procedures, products and services, such as the once scheduled for this year, are usually an outcome from these meetings. However, the NHC and the local NWS offices are in good contact with each other during active events, so needed changes, if any, are often already contemplated and known before these meetings,” Miketta said.

The implementation of a 60-hour forecast is another example of this. The NHC has provided forecasts 120 hours, or five days, out since 2001. However, forecast intervals have been at 48 and 72 hours, among others.

Using Superstorm Sandy as the example in 2012, anyone viewing the NHC’s 11 p.m. Friday forecast update before the storm’s Monday arrival would more clearly be able to pinpoint when the turn to the west would occur. That change in direction occurred that Monday morning, 60 hours after that 11 p.m. Friday forecast.

One change that occurs every year, regardless of conference calls with the local NWS offices, is the update to the NHC’s track forecast cone. The cone represents the probable track of the center of a tropical cyclone. Sixty-six percent of historical official forecast errors over a 5-year sample fall within the cone.

However, dramatic gains have been seen in the track forecast cone since the turn of the century. Ninety-six-hour, or four-day, forecasts are as accurate in 2020 as 48-hour forecasts were in 2000. Seventy-two-hour, or three-day forecasts, have the same accuracy as a storm 24 hours did. Forecasts beyond 72 hours out didn’t exist until 2001.

Improvements in the track forecast cone have “always been something that we as emergency managers understood,” Jones said.

Miketta says that people can expect future NHC improvements to be focused on showing the full range of options a storm may move or change intensity.

“A greater emphasis on probabilistic forecasts will likely occur in the next few years given the huge consequences that can occur with even just a minute error in the forecast. For instance, a track error of just 2 or 3 miles can make a big difference for communities near the eye as to whether or not they’ll experience storm surge flooding, one of the biggest threats from these storms,” Miketta said.

Furthermore, as the NHC, and its parent organization, the National Oceanic and Atmospheric Administration, continue to improve hazard communication, expect a more direct connection to residents.

“Social media will be taking on a greater role in keeping the public informed concerning storm movement, intensity, and impact, especially among younger people,” Miketta said.

The July 7 Atlantic Hurricane season update from Colorado State University has another increase in the amount of tropical activity expected.

Including the fived named storms that occurred at the time of the July 7 update, which put the 2020 Atlantic Hurricane season on a record breaking pace, CSU forecasts 20, named tropical storms or hurricanes to occur. That is an slight increase from the 19 last predicted in the June update. Out of the 20, 9 hurricanes and 4 major, category 3 or greater (at least 111 mph sustained winds) are forecasted, the same as the June update.

"We have maintained our above-average seasonal hurricane forecast for the 2020 Atlantic season." the CSU report read, which is led by Philip J. Klotzbach, Michael M. Bell, and Jhordanna Jones.

There still remains an above average risk of a major hurricane making landfall on the East Coast of the United States, including the Florida Peninsula. The 45% chance is virtually unchanged from earlier updates On average, there has been a 31% probability in the last century.

CSU attributes warmer than average waters in the subtropical Atlantic Ocean, slightly warmer than average waters in the tropical Atlantic as reasons for the active forecast. Furthermore, a possible transition from a neutral El Nino Southern Oscillation to a La Nina late this summer would promote an active season. In a La Nina, there's a lack of wind shear, or change of winds with height, which can rip storms apart.

Tropical cyclone names rotate every six years. Exceptionally notable hurricane names, such as Sandy, become retired by the World Meteorological Organization. However, no names were retired in 2014, meaning 2020 will have the same list as then.

It's the sixth year in a row that a named tropical system has developed in the Atlantic Hurricane Basin before the June 1 official start.

Even though the official start to the Atlantic Ocean hurricane season is June 1, May has not…

Dolly was the third earliest fourth named (D storm) storm in Atlantic Hurricane history, which goes back to 1851. It also flared up further north than any tropical storm before July 1 in recorded history, according to Sam Lilo, postdoctoral researcher at the National Oceanic and Atmospheric Administration

The Atlantic Hurricane season continued its blistering pace. Edouard, which developed July 6, was the earliest fifth named (with the letter "E") storm in Atlantic Hurricane history, which goes back to 1851. This is according to Philip Klotzbach, Meteorologist at Colorado State University, who issues a highly reputable hurricane forecast each year and is used by The Press.

#Edouard has formed in the far North Atlantic - the earliest 5th Atlantic named storm on record. Previous record was Emily in 2005 on July 12 at 0 UTC. #hurricane pic.twitter.com/K7cB6UKUnq

The previous record was held in 2005 with Emily, which occurred on July 12. 2005 holds the record for the most active hurricane season on record in the Atlantic Hurricane basin, with 27 named storms.

However, all of the storms to this point have all been tropical storms. Some, like Edouard, likely would not have even been noticed before the satellite era, as they were out to sea and may have been missed by shipping routes.

Tropical Storm Fay will go in the record books for multiple reasons.

- It is the tenth tropical storm or hurricane to make landfall in New Jersey since 1900.

- It made landfall just south of Holgate, on Long Beach Island, this is, incredibly, about ten miles away from where Tropical Storm Irene and Superstorm Sandy made landfall, right near Brigantine.

Two rounds of rain, plenty of sun, as summer locks in this week

As Tom Petty and The Heartbreakers sang, “I feel summer creepin’ in.” Just like the album the song was on, the “Greatest Hits” of summer will …

Some showers Tuesday, temperatures soar to near 90 afterwards

Tuesday doesn’t look to be a washout, but a few showers will be around as a disturbance passes through. Wednesday and Thursday will then be a …

Friday will continue in the footsteps of Thursday. Expect it to be mostly dry during the daytime, with thunderstorms overnight. The weekend wi…