ATLANTIC CITY — Stakeholders from the state, county and city met behind closed doors Monday to discuss options for property owners who were recently hit with a substantial — and surprise — tax increase.

Despite “everything” being on the table and participation from officials capable of enacting meaningful reforms, the first meeting of the Atlantic City tax task force produced no immediate results for taxpayers.

But, those who took part in the nearly three-hour meeting said it was productive and left encouraged by the discussions that transpired.

Lt. Gov. Sheila Oliver, who also serves as commissioner of the state Department of Community Affairs and convened the task force, said Monday’s meeting centered around transparency and improving communication among all parties.

“I think that it was the first time in history, I’m told, that the various stakeholder institutions in Atlantic City had the type of discussion that we had with one another,” she said. “I think everyone is looking forward to sitting down with some economists and some tax experts, and really beginning to scientifically project what’s the best way to put the city and the county and the regional economy on a good footing.”

The cause for the increase is two-fold: the city received nearly $6.7 million less in tax credits from the county this year and the reduction of the city’s overall tax base, both of which are a direct result of the casino payment in lieu of taxes, or PILOT, program enacted several years ago at the onset of the state takeover.

Freeholder Earnest Coursey, who represents Atlantic City on the county board, said the task force participants recognized that the unexpected tax increase constituted a “crisis,” not just for those on a fixed income but for the average city resident who is barely getting by as it is. While no specifics were made public, Coursey said that “everything was on the table” in terms of finding both short- and long-term tax relief for city property owners.

Coursey, a Democrat who is running for re-election this year, said the fact that no one at any level of government warned city residents about the tax increase was a “serious issue” but added that the time for placing blame was over.

“We need to talk about policies and not politics,” Coursey said Monday. “Whether we’re sitting on the freeholder board, whether we are in the city of Atlantic City or the state of New Jersey, today is not the day to be pointing fingers. We already know what happened. How do we correct the problem?”

Atlantic County Executive Dennis Levinson, a Republican running for re-election who was originally tapped by Oliver to lead the task force but was later only asked to participate, was not present Monday. County Counsel James Ferguson appeared on behalf of Levinson and said the county was concerned that it was shouldering the blame for the tax increase.

A Sept. 6 letter from Levinson to DCA Deputy Commissioner Rob Long suggests that the state, which is in control of both the city government and local school board, should have been aware of the impending tax increase and could have taken measures to prevent it.

“You control the functions of city government because you found the mayor and city council lacking and believed you could better manage city government. You also found fault with the management of the school board’s finances and took that under your wing. But somehow, you contend the Atlantic City tax increase is the fault of Atlantic County government that wields no control in this matter and the school system that you control,” the letter reads.

Ferguson said while transparency was discussed Monday, the county’s position was that the ideal was not being adhered to. As an example, he cited an Open Public Records Act request submitted on Aug. 23 for tax appeal judgments to the city and state that had yet to receive a response. 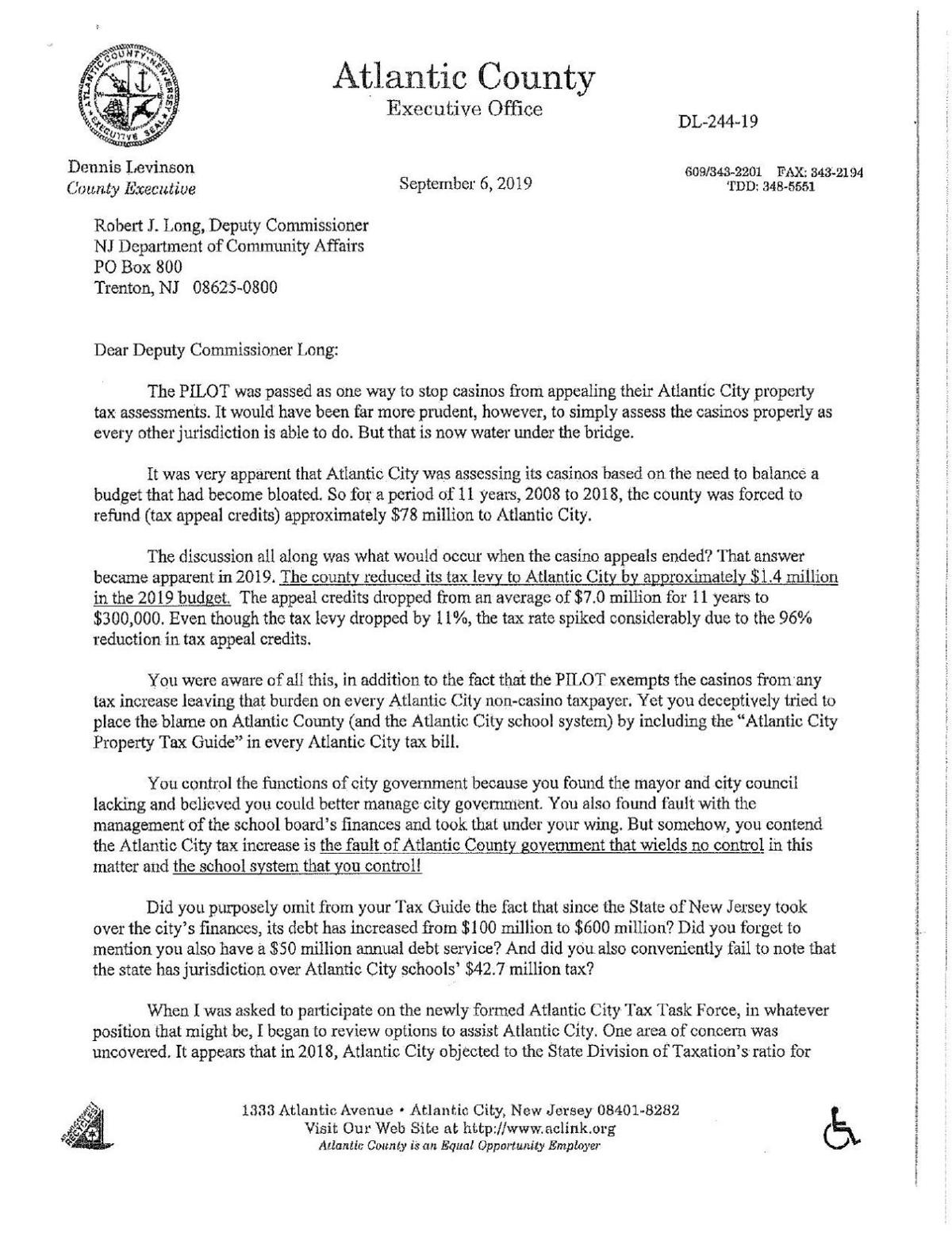 “I must question if there is a genuine interest in finding a solution to Atlantic City’s tax issues or if public perception is your primary focus,” Levinson’s letter concluded.

Council President Marty Small Sr., who also serves as chair of the city’s revenue and finance committee, said the ultimate goal is to take care of residents and prevent another surprise such as this in the future. Small said there were discussions about how the city could recoup lost revenue streams from the luxury tax, room and parking fees, and the recently created tax on sports betting revenue that benefits two other state municipalities with retail sportsbooks but excludes Atlantic City.

‘We’re not pointing the fingers because residents don’t want to hear that,” he said. “The bottom line is this: we need to increase our revenue streams.”

A subsequent tax task force meeting was agreed to by all parties, but a date has not been set.

Should the state broaden how luxury taxes are used in Atlantic City?

ATLANTIC CITY — While floating a plan to spend $10.5 million in luxury tax revenue to renova…

Towns allowed to leave schools out of PILOT payments. A proposed law would change that.

Editor's Note: This article was updated Wednesday to reflect clarifications by the Departmen…

ATLANTIC CITY — Property taxes here are going up this year by a substantial amount — $676.50…

CAPE MAY COURT HOUSE — Starting at the end of this month, 31,320 rabies vaccine baits will be distributed by hand and helicopter throughout ma…

Lt. Gov. Oliver to speak at housing and economic conference in A.C.

Lt. Gov. Sheila Oliver will be in Atlantic City Monday to speak at the 2019 Governor's Conference on Housing and Economic Development.

Atlantic City to put nearly 300 properties up for sale

ATLANTIC CITY — In search of ways to generate revenue and lessen the burden of a recent tax increase on residents, city officials approved put…

Atlantic freeholders to get update on Lake Lenape dam

Atlantic City students learn how to register to vote

ATLANTIC CITY — City taxpayers have formed a group to combat the rising costs of living in the resort.

ATLANTIC CITY — Council President Marty Small will be appointed to the city’s top political post Friday, an office he has chased for years.

Small asks CRDA to pay PILOT in first board meeting

ATLANTIC CITY — In his first meeting as a board member, acting Mayor Marty Small asked the Casino Reinvestment Development Authority to consid…

Atlantic City taxes could go up next year, but they don't have to

Something is better than nothing. Atlantic City taxpayers should remember these words when judging the little reduction announced recently in …

I don't think there is any great secret here.... The state takes too much money from AC!