ATLANTIC CITY — The city Clerk’s Office rejected a petition in support of changing the city’s form of government Wednesday and set the stage for an impending legal battle.

On the final day legally permitted for official certification, City Clerk Paula Geletei informed the head of the political action committee behind the change effort that the petition submitted in December contained only a fraction of permissible signatures and therefore failed to meet the required threshold.

In a letter to Bob McDevitt, chairman of Atlantic City Residents for Good Government, Geletei said that after her “office and legal counsel” reviewed the petition, only 699 signatures were valid.

Contacted Wednesday evening, McDevitt, who is also president of Unite Here Local 54, the casino workers union, said he was not disappointed by the clerk’s rejection because it was anticipated.

“I’m not surprised that the cartel that runs Atlantic City would choose and try to ‘lawyer’ the petition because, after all, the lawyers that pull their strings ... that’s all they know how to do,” he said. “We fully expected them to ‘lawyer’ this thing. We’re confidant that we’re going to overcome it.”

McDevitt said he would have a more detailed legal rebuttal to the letter Thursday.

Atlantic City Residents for Good Government submitted two batches of petitions — on Dec. 11 and 19 — with more than 3,000 signatures. The petition needed 935 valid signatures to be certified. The group also submitted a third batch Monday, which was not part of the review. 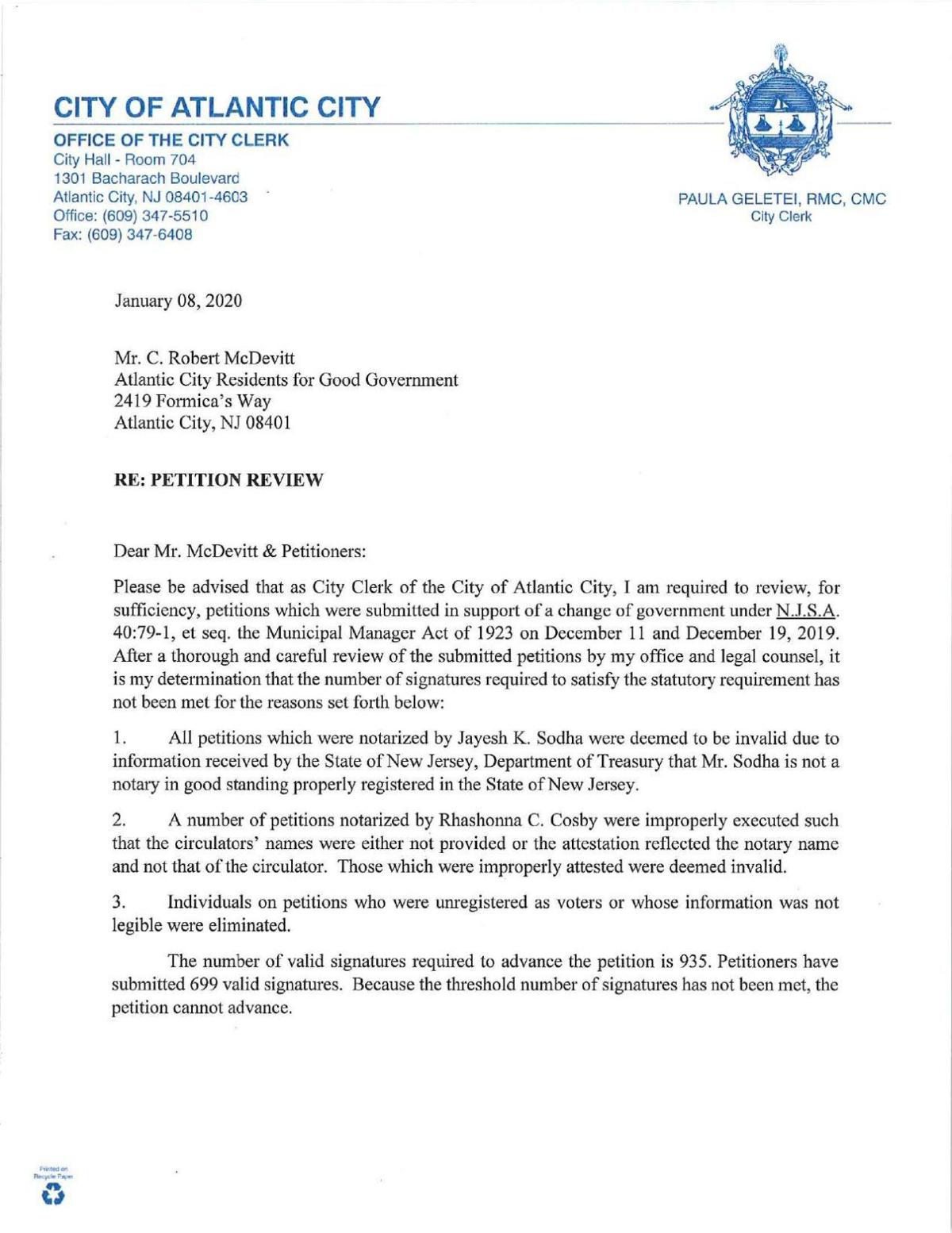 According to the letter, a number of petitions contained signatures from unregistered voters while others were rejected because the information was “not legible.” Geletei also said a number of petitions were invalid because one notary was not in good standing with the state and a second notary improperly attested to others.

Upon hearing the news, Mayor Marty Small called Wednesday “a great day here in the City of Atlantic City.”

“These are the same out-of-town special interest group that say we can’t run Atlantic City, and they can’t even execute a petition,” Small said. “I’m sure all of the money spent on and off the books by this group could have been better spent on Atlantic City nonprofit youth programs.”

The petition group began collecting signatures over the summer.

Proponents of the change say the reform is needed to curb nepotism, fiscal mismanagement and corruption in City Hall. Opponents believe the effort is little more than a coup attempt orchestrated by outsiders with self-serving interests.

The petition group had been seeking to change the makeup of government to a council-manager form implemented under the 1923 Municipal Manager Law. The change would reduce the number of council members from nine to five and eliminate a directly elected mayor. Under the 1923 council-manager form, nonpartisan elections would be held in May and at-large elected officials would serve four-year terms beginning in July.

Rather than an elected mayor serving as the city’s chief executive, a municipal manager would be hired by the governing body to oversee the day-to-day operations of the city, including preparing a budget, negotiating contracts and handling most personnel matters.

A mayor would be selected annually from among the at-large council members and preside over public meetings.

That was the correct thing. Elected Mayor and Council. If they want to eliminate cronyism and cheating they need to eliminate messenger ballots and be strict with absentee ballots. That is the solution.