A satellite image from NASA shows Hurricane Sandy, which made landfall near Brigantine on Oct. 29, 2012. 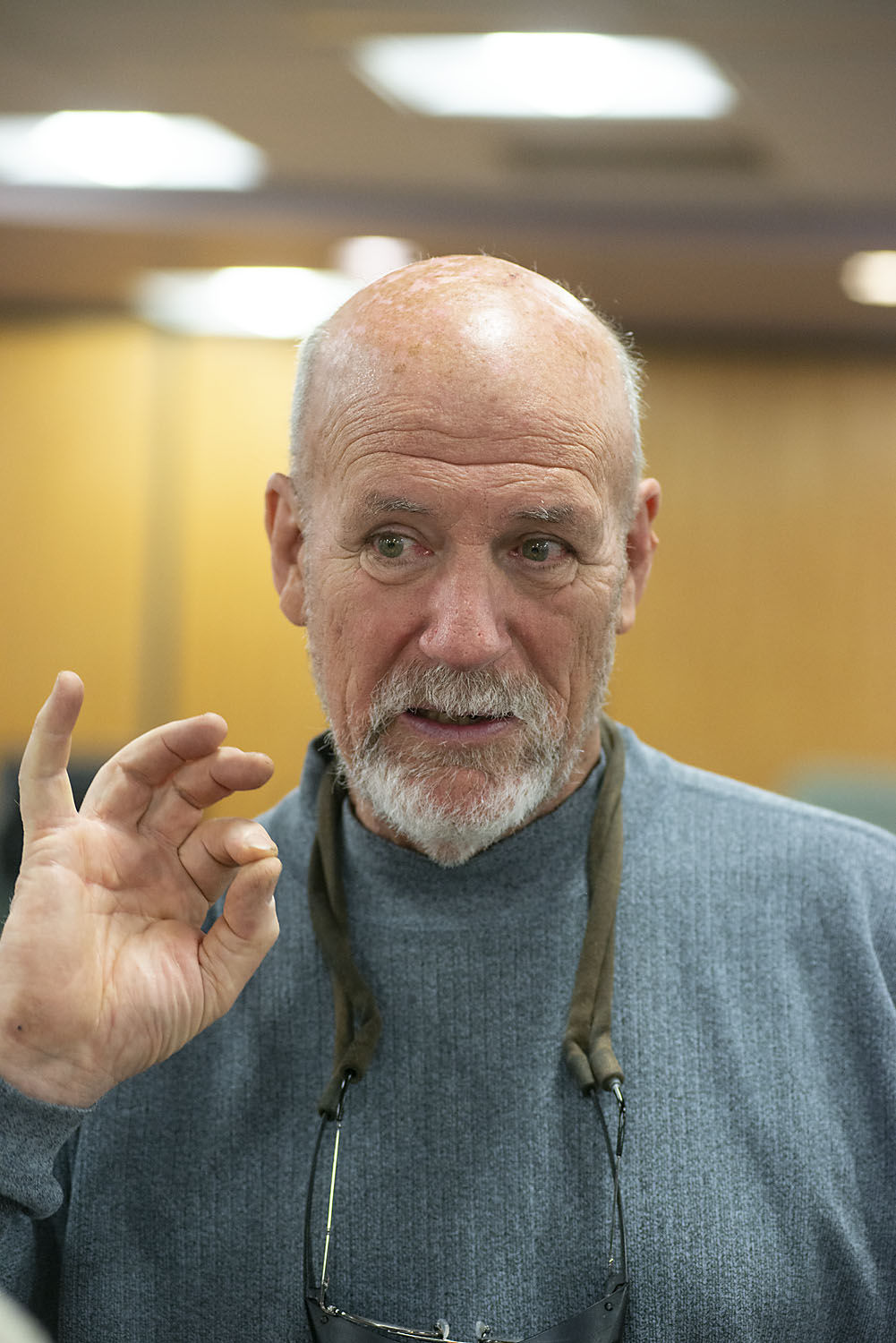 FARRELL Stewart Farrell, director of Stockton University’s Coastal Research Center, talks about rain drainage sensors that can produce data on flooding. On May 2nd 2018, at Longport Borough Hall, at a meeting of the Coastal Coalition.

Driven by warmer oceans that expand as they absorb heat, the melting of land-based ice sheets and the sinking of mid-Atlantic lands, our coastlines are seeing increased rates of flooding.

Floods that once occurred every 500 years in New York now happen every 25 years, according to Andra Reed Garner, a Rutgers University meteorologist who studies the impact of climate change on hurricanes and flood risk in New York City as part of a National Science Foundation Earth Sciences postdoctoral fellowship. 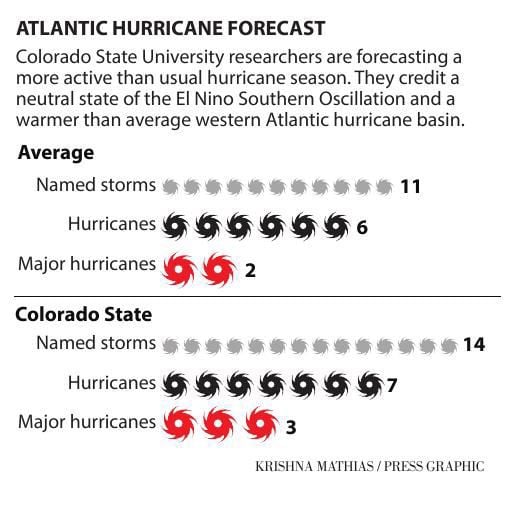 Garner used the example of a 7.4-foot-high water level in the Battery Park section of New York City. Before the Industrial Revolution, those floods occurred every 500 years, but now they happen every 25 years. By “2030 to 2045, it will occur on average every five years,” she said.

Ocean water has absorbed more than 90 percent of the increased heat from our warming planet since 1971, according to the National Oceanic and Atmospheric Administration. Average surface temperatures are rising, especially in the tropics, where hurricanes form. Heat and water are rocket fuel for hurricanes, so as ocean temperatures rise, the deadly storms will keep getting stronger, according to growing scientific evidence.

The moist, warm air rises, until about 20,000 feet, where temperatures are cooler, it condenses and forms thunderstorms. The earth’s rotation kicks in, sending the system spinning into the telltale spiraling cyclone pattern — counterclockwise in the Northern Hemisphere, clockwise below the equator. Wind speeds start at a gusty 10 to 20 mph and build from there.

At 35 mph, you have a tropical storm, at 75 mph, a hurricane. What’s a stronger storm’s potential?

“The circulation can get pretty intensive. Two hundred mph winds are scientifically possible,” Farrell said. “The warmer the water is, the higher the peak velocity gets. There’s more energy in the system.”

A rise in ocean temperature of just 1 degree Fahrenheit can increase a hurricane’s wind speed 15 to 20 mph, according to the Yale Climate Connection, a publication of Yale University. That’s enough to push a tropical storm into a hurricane, or a hurricane to the next category of severity.

Garner’s work indicates while East Coast hurricanes will increase in intensity because of warming oceans, the storms will tend to track farther out in the ocean. That would mean storms, while potentially stronger, wouldn’t present the same surge risk in New York City — or perhaps even along the Jersey Shore — according to the computer models she has run.

The science suggests a range of possibilities.

Research by Thomas Knutson of Princeton University’s Geophysical Fluid Dynamics Laboratory predicts global warming will affect wind patterns in a way that will work against the formation of more hurricanes but will make those that do develop more likely to reach category 4 or 5.

Researchers have shown hurricane activity in the North Atlantic goes back and forth between a 20- to 40-year cycle of increased activity and a similar period of less activity.

According to the University of Arizona, there were a lot of hurricanes packing more power from 1944 to the late 1960s, with a quieter period from 1970 through the mid-1990s, and another more active, energy-filled period from 1995 through today. It’s unknown whether quieter periods will still recur, or if they will become shorter, as oceans continue to absorb more heat, researchers say.

While much of the evidence suggests warming temperatures will impact future Atlantic hurricane seasons, more research will be needed to determine the exact impact.

South Jersey one of safest when it comes to hurricane landfalls

The return period for a hurricane to strike the South Jersey coast is every twenty years, on…

Andrea Palermo’s life has taken on the ups and downs of the tides she follows on her phone app.

The polar ice cap is melting, our ocean is expanding and New Jersey is sinking.

Some marshes look darker and grayer this spring, but that’s a good thing, biologists and wet…

A new tool may tell us where Delaware Bay sand travels

After years of rebuilding Delaware Bayshore beaches decimated by Hurricane Sandy, the Americ…

The 3 main changes the National Hurricane Center has for 2018

Ocean surface temperature has been consistently higher during the past three decades than at any other time since reliable observations began in 1880.

Based on the historical record, increases in sea surface temperature occurred more intensely between 1910 and 1940, and from about 1970 to the present; temperatures appear to have cooled between 1880 and 1910.

While most parts of the world’s oceans have seen temperatures rise, a few areas have experienced cooling; for example, parts of the North Atlantic.

I sat down with Michelle Brunetti Post to talk about our year long series into coastal flooding in South Jersey, Rising Waters. This is the fi…

The world is warming, especially its oceans, and that should be a special concern for those living along the coast or even regularly visiting …

A flood insurance program heavily subsidized by taxpayers and $25 billion in debt will end July 31 if not reauthorized by Congress.

SEA ISLE CITY — For the residents of this small coastal community, one out of three of whom are seniors, Hurricane Sandy was an eye-opener.

In Atlantic City, a century-old solution to flooded streets is working again

ATLANTIC CITY — The resort can thank its great-great-grandparents for installing a major flood control system more than 100 years ago.

Study: Flooding has cost this Jersey Shore town $5.3B in home value losses

New Jersey has lost $4.5 billion in appreciation of home values since 2005 because of flooding related to sea-level rise, and Ocean City has l…

The state Department of Environmental Protection’s ninth annual WILD Outdoor Expo — with more than 100 exhibits, demonstrations and seminars a…

Rutgers team may have evidence of earliest life protein

NEW BRUNSWICK — A team of Rutgers University researchers has modeled a simple protein that could help explain the start of life on Earth.

Wind and solar farms enhance local rainfall and vegetation cover in the Sahara desert, according to a new study from an international team of …

How high can they go? Raising roads to outrun rising waters

ATLANTIC CITY — The Great Atlantic Hurricane of 1944 hit the New Jersey Coast 74 years ago on Sept. 14, destroying most boardwalks — including…

Plants have begun growing earlier in spring as Earth's climate has warmed, and it has been assumed the trend might slow climate change by allo…

ATLANTIC CITY — The Great Atlantic Hurricane of 1944 damaged the New Jersey Coast 75 years ago on Sept. 14, destroying most boardwalks — inclu…