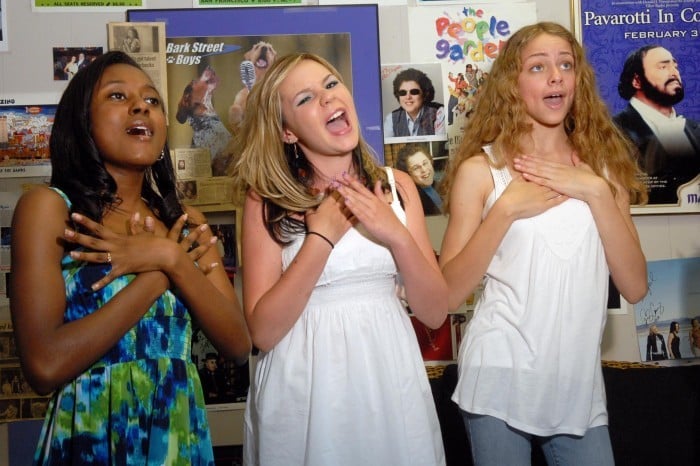 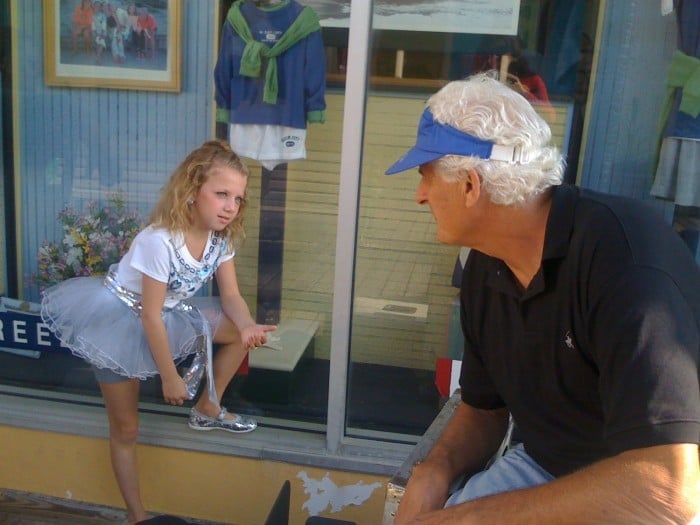 Alanna Palombo, 10, of Seaville, Upper Township, and Stewart Raffill, director of the movie "Standing Ovation," discussing a scene during the shooting of the film. 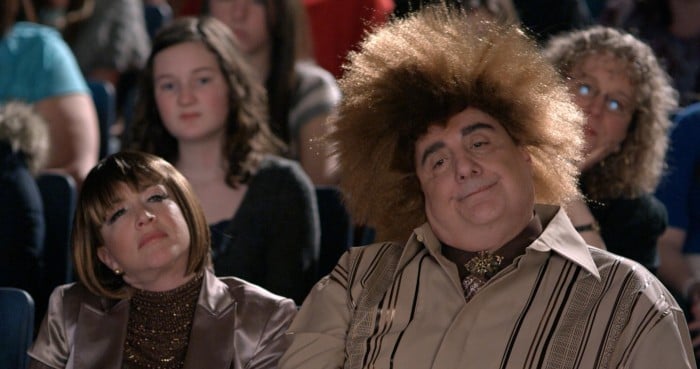 In a scene from the movie "Standing Ovation," left, Suzie Neustadter of Margate, as Mrs. Wiggs, and Sal Dupree of Mays Landing as Mr. Wiggs. 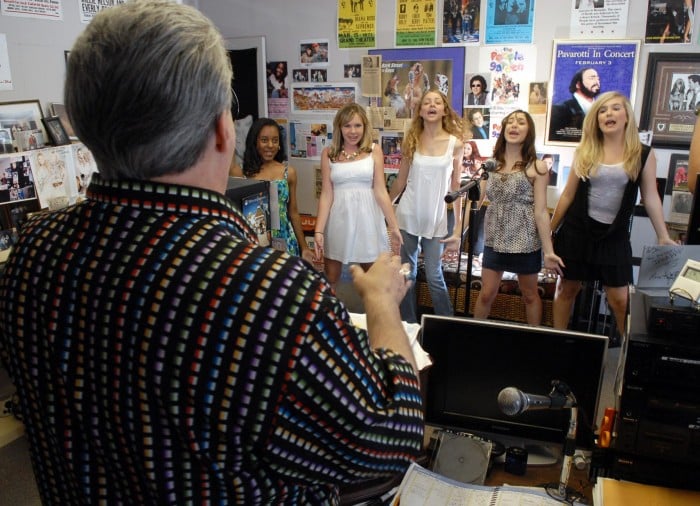 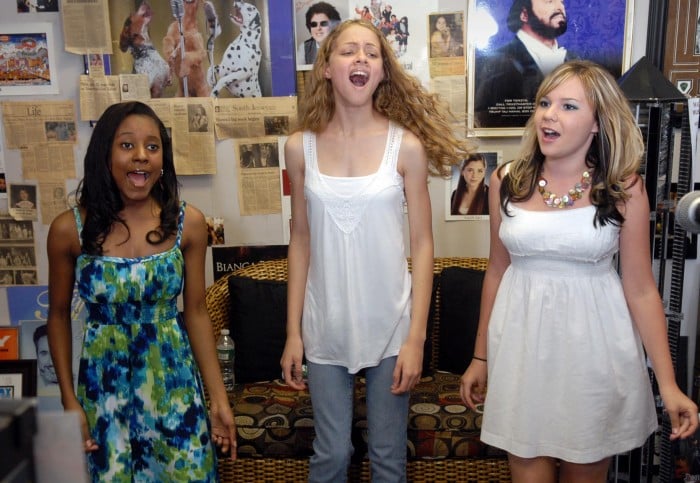 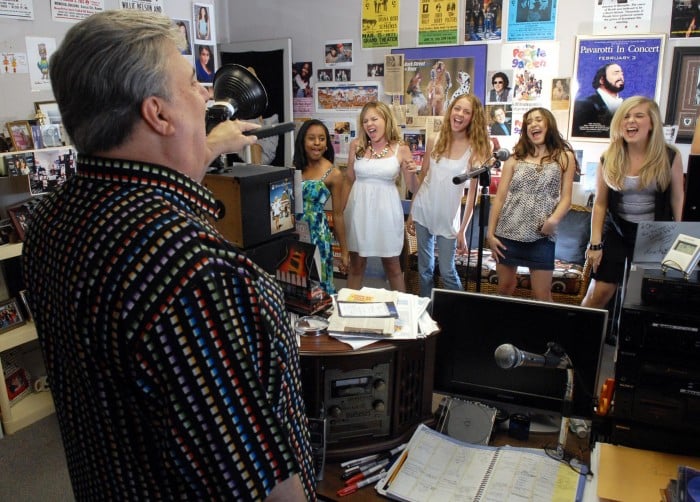 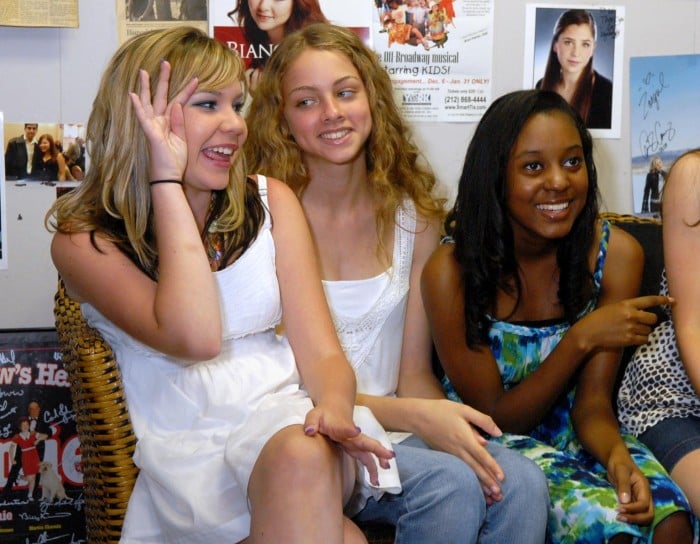 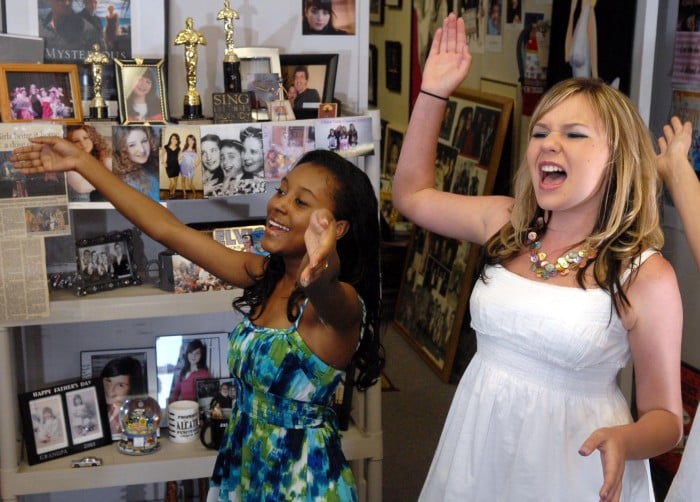 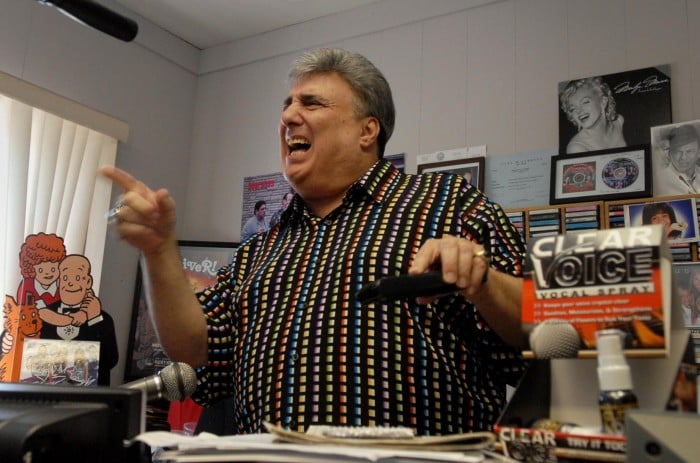 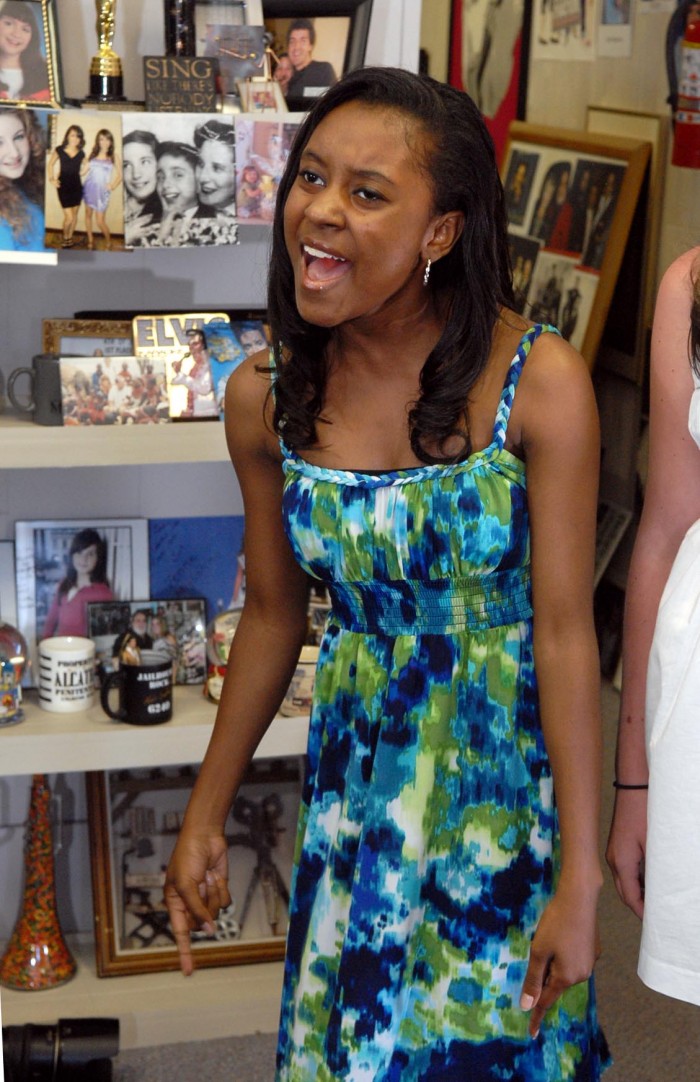 Na'jee Wilson, 14, of Vineland, rehearses at Dupree Performing Arts Studio in Linwood.
1 of 10

Alanna Palombo, 10, of Seaville, Upper Township, and Stewart Raffill, director of the movie "Standing Ovation," discussing a scene during the shooting of the film.

In a scene from the movie "Standing Ovation," left, Suzie Neustadter of Margate, as Mrs. Wiggs, and Sal Dupree of Mays Landing as Mr. Wiggs.

A group of southern New Jersey teens don’t need to envy Zac Efron or any of the other stars of “High School Musical.”

They appear in their own full-length film musical, singing and dancing in the PG-rated “Standing Ovation,” which opens Friday in 600 movie theaters nationwide.

And like the characters in the movie, the kids are excited about taking their shot at stardom.

“'Standing Ovation' is like 'High School Musical' for a younger group of people, more junior high and elementary school,” said Kayla Jackson, 13, of Vineland, who portrays Brittany, a member of The 5 Ovations singing group in the movie. “I saw (the movie) in California. It was surreal seeing myself on the big screen, because I never imagined that I would ever see myself there.”

Featuring a cast of southern New Jersey children, “Standing Ovation” also showcases Atlantic City and locations in Margate, Somers Point, Ocean City, Marmora, Cape May Court House, Wildwood and Cape May. The film was shot in the area in 2008 and 2009.

“Standing Ovation” is a labor of love by several people with local connections.

Click here to read a review of the film

The film follows the journey of five friends who — as the singing and dancing group the 5 Ovations — are chasing their dream of becoming champions in the biggest television music video contest of the year. It includes 20 original songs and 13 dance routines.

Two of the featured dancers are Mykal Williams, 16, of Absecon, and Spencer Wetherington, 9, of Upper Deerfield Township, Cumberland County. Alexis Biesiada of Egg Harbor Township and Na’jee Wilson of Vineland also portray members of the 5 Ovations.

Wilson, who finished ninth grade at Vineland High School in the spring, didn’t know any of the girls in her singing group when cast.

“I actually had a really good time being with them and hanging out with them because once I was with them, we acted like sisters. We gave out numbers. We hang out. We went over each other’s houses. We had sleepovers. We went to movies together. It was absolutely amazing how well we get along with each other,” said Wilson, 15.

Biesiada, who attended Egg Harbor Middle School this past spring, doesn’t just act in the movie. She co-wrote a song that she performs.

“It all started with me and my producer Tony Coluccio. I was 9 years old, and we were thinking about writing a new song. I didn’t know what to write about. He told me: What do you like to do? I said, ‘All I Wanna Do Is Sing.’ Then, he said, ‘There you go. That’s your song.’ Then, I sang it for Stewart (the director), and he really liked it, and he really wanted it in the movie,” said Biesiada, 13.

In the movie, The 5 Ovations face a rival singing and dancing sister group called The Wiggies. Their father, Mr. Wiggs, played by Dupree, owns the biggest wig factory in the country and uses dirty tricks in trying to overthrow the 5 Ovations.

It was about three years ago that Kirman came up with the idea of making a movie in southern New Jersey with local children. She knew Dupree and thought many of his students were talented and could be in the picture. But Dupree suggested an open casting call for children in New Jersey and Philadelphia.

Dupree’s students comprise about 25 percent of the cast.

Twelve of Dupree’s students ended up with featured roles.

Austin Powell landed the role of Mark O’Brien, the brother of Brittany, the leader of the 5 Ovations. Powell, 16, attended Egg Harbor Township High School while the picture was being filmed. He said it was it difficult at first to handle school and the five months of filming.

“Honestly, there is nothing more to it than buckling down and really dedicating yourself. When something this big  comes along, it is a once-in-a-lifetime opportunity. It’s something in my own backyard, so I had to seize this opportunity with everything I had, and I just set out to do it,” said Powell.

A part just for her

Dupree thought it would be good practice for Alanna Palombo, then 8, of Seaville, Upper Township, to audition for the movie even though there wasn’t a part for her.

Palombo captured the eye and ear of director Stewart Raffill at an open audition. He created the role of “Alanna Wannabe” specifically for her.

“If you have the guts to sing in front of people, you should be fine just getting on a stage. I’m not afraid to go onstage and do anything for anyone, but it kind of depends on the person,” said Palombo, now 10, who is the youngest cast member and didn’t think she would be cast. “In the movie, Alanna Wannabe ... is very obnoxious. She won’t give up. In real life, I won’t give up, but I’m not as obnoxious in life as Alanna Wannabe is.”

Brooke Erin Feldman, 13, also has Dupree to thank for her part in the film. Feldman, who will be entering eighth grade this fall at the Eugene A. Tighe Middle School in Margate, not only landed a part, she sings the opening song, “Bring It To The World.”

“I went to Los Angeles to go to the Universal premiere. It was quite an experience. I remember seeing myself for the first time on the big screen. I had tears in my eyes. I was smiling. I was just so happy,” said Feldman, a Margate resident, who attended the premiere with her mother, brother and father.

Adults got a chance, too

The excitement attached to the nationwide release of “Standing Ovation” extends beyond teens and preteens.

Joanne and Anne Reagan of the Joanne Reagan Dance Studios, in Cold Spring, Lower Township, were cast in the film. Several dozen of their students served as backup dancers to the 5 Ovations.

Suzie Neustadter was cast as Mrs. Wiggs. She is the artistic director of the Suzie Performing Arts Camp at the Shore in Ventnor.

“They are young. They are 15 and 16 years old. They were professional. They knew exactly how to handle themselves on set. They were where they were supposed to be. They knew how to take direction. They were great. They really were,” said Neustadter, a Margate resident.

The reason “Standing Ovation” is in theaters today is because Kirman would not give up.

Her husband, Raffill, directed actor James Brolin in a 1981 movie called “High Risk” and in 2007 in a film, “Sirens of the Caribbean.”

Brolin was brought onboard as one of the film’s executive producers. He has generated publicity for the movie by arriving on Saturday with his wife, Barbra Streisand, at the world premiere in Los Angeles. He talked about the movie during appearances on the TV shows “The View” and “The Joy Behar Show” on July 14.

"Standing Ovation" will be shown starting Friday at the Landis Theater in Vineland, Rio Stadium 12 in Rio Grande, Moorlyn Stadium 5 in Ocean City and Towne Stadium 16 in Egg Harbor Township.

With a photo gallery and video preview of the film

Have you not read any of the reviews? They are universally bad, like, BAD. Wait til it comes out on DVD if you really need to see it. SF Chronical says it is "amateurish" and "it's annoying in 2 or 3 ways simultaneously...it produces complex chords that resonate in the mind and reverberate through the skin until it starts to crawl." The link above calls it "a bubble gum mess lacking structure, coherence and any sense of drama." Go to Rotten Tomatoes and read those reviews... they don't get any better.