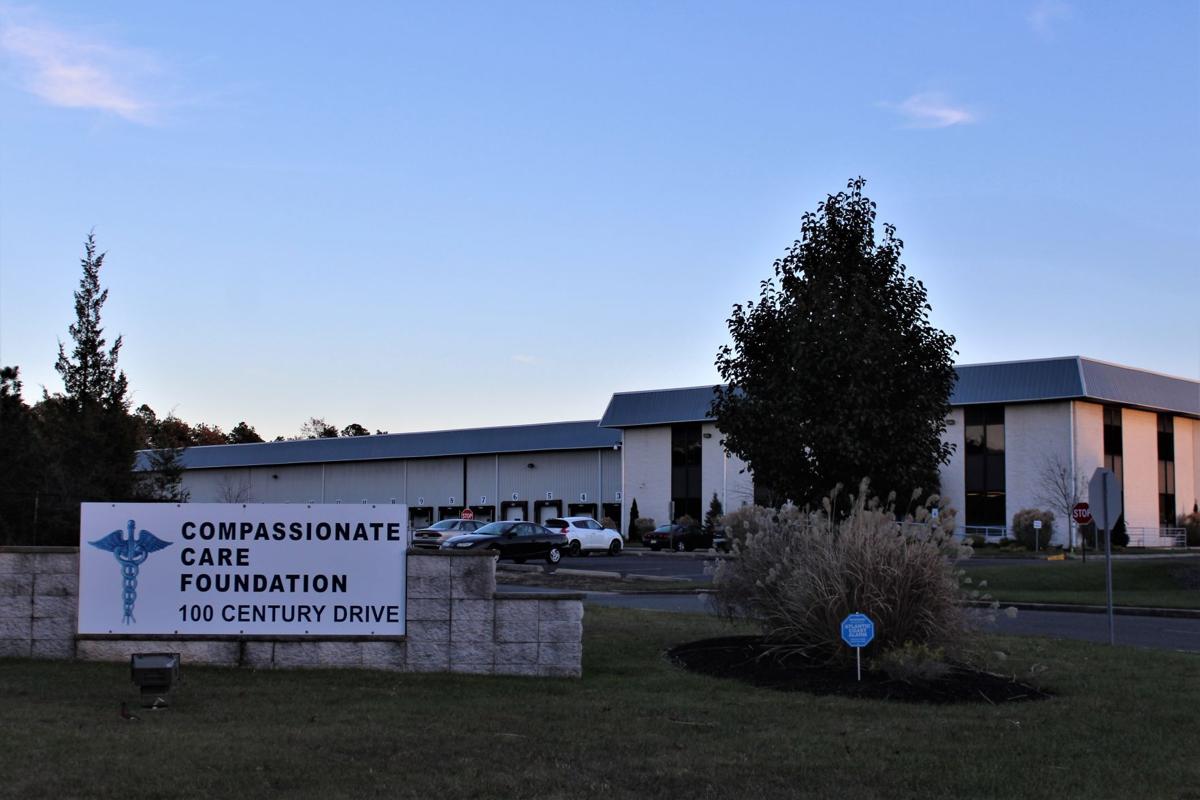 The Compassionate Care Foundation in Egg Harbor Township grows and distributes marijuana for medical use. 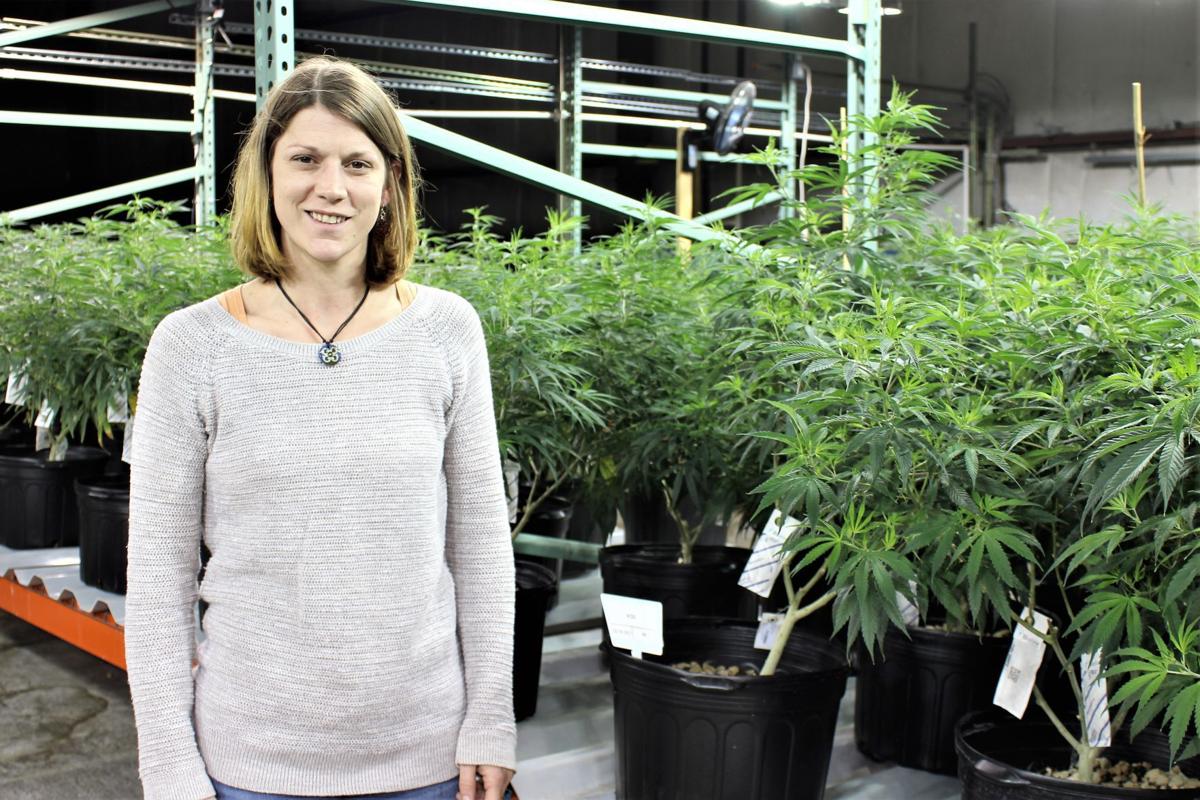 Cady Riley, left, is a wellness counselor and executive assistant to the CEO at Compassionate Care Foundation in Egg Harbor Township, where medical marijuana is grown and distributed. The facility received its final permit needed to open in October 2013. It struggled early. It now serves 2,661 patients.

The Compassionate Care Foundation in Egg Harbor Township grows and distributes marijuana for medical use.

Cady Riley, left, is a wellness counselor and executive assistant to the CEO at Compassionate Care Foundation in Egg Harbor Township, where medical marijuana is grown and distributed. The facility received its final permit needed to open in October 2013. It struggled early. It now serves 2,661 patients.

Rows of the plants thrive under day-and-night grow lights, with scrutiny from the state Department of Health that is nearly as intense. The crew must account for every stem and trimmed leaf until the buds are dried and sold. A buyer must have a recommendation from a doctor, register and qualify for the state medical marijuana program, and present a photo ID card.

Come 2018, there could be major changes in store for the facility.

New Jersey may be close to joining a growing number of states that allow the recreational use of marijuana, and the Egg Harbor Township facility could be in a position to take advantage of that change.

EGG HARBOR TOWNSHIP — A proposed school policy for transgender students divided the township last winter before the Board of Education killed the measure.

On Jan. 16, New Jersey will move out from under the governance of Republican Chris Christie, a former U.S. attorney who took a hard line against marijuana throughout his career, to that of Democrat Phil Murphy, who said during his campaign he would sign legislation to make pot legal for those 21 and older. State Senate President Stephen Sweeney has told reporters he wants to put a legalization bill on Murphy’s desk within 100 days of his oath of office.

Dave Knowlton, chairman of the board at the Compassionate Care Foundation, said he is optimistic a change in Trenton could mean an easing of restrictions in the medical marijuana program.

“I’ve never smoked marijuana in my life, but I believe passionately that it can help people,” Knowlton said. “I’m glad we’ve rounded the corner so that we can have a rational discussion about it. It’s going to be a very exciting time.”

He said some patients’ conditions could improve with marijuana, but they fail to meet the state criteria.

Under New Jersey’s medical marijuana program, people who have been diagnosed with certain conditions can buy marijuana with the recommendation of a physician who has registered with the program. According to a recent report from the state Department of Health, 426 physicians are active in the program, and there are more than 12,000 qualifying patients statewide and more than 1,000 registered caregivers. The report indicated that since its final permit in October 2013, the Egg Harbor Township facility has made 26,683 transactions — all under video surveillance.

Knowlton said he expects to see an expansion at the facility under a marijuana-friendly administration, even without full legalization. He described some of the current regulations as cumbersome and said change is inevitable.

“There’s no question that the future is changing. But there’s two levels to this,” he said. “We’re very strong supporters of the medical use of marijuana. But if we go to recreational use, we should do so responsibly.”

Knowlton said he recently visited Colorado, where the sale and possession of marijuana for adults has been legal since 2014.

Planning Board OKs expansion at AtlantiCare Health Park in EHT

EGG HARBOR TOWNSHIP — Construction could begin next year on a new two-story building at the AtlantiCare Health Park on English Creek Avenue.

“In many respects, Colorado has done a very good job,” he said.

New Jersey lawmakers should look to that state for lessons, Knowlton said, and then carefully consider whether it makes sense to legalize recreational marijuana and how to proceed.

If Trenton takes that step, it will mean a big boost for Compassionate Care.

“Absolutely. If you go with adult use, you’re going to see medicinal get blended into that,” he said.

In Colorado, where medical marijuana had been legal since 2000, facilities that grew cannabis for medicine moved into growing for the recreational market.

“We’re going to expand into that if the opportunity is afforded,” Knowlton said.

In 2010, New Jersey became the 14th state to legalize marijuana as medicine. Gov. Jon S. Corzine signed the bill just before Christie took office. It was years before the first legal cultivation, under a system that established six dispensaries, referred to as alternative treatment centers, throughout the state.

EGG HARBOR TOWNSHIP — A policy aimed at saving energy at township schools may be making things uncomfortable for after-hours staff, and could have contributed to the mold issue at Slaybaugh Elementary School.

Marijuana remains illegal under federal law, which makes things complicated for patients, growers and doctors. Federal courts have found the First Amendment protects a doctor’s right to discuss any treatment option with a patient, including recommending marijuana use. But a doctor cannot legally prescribe marijuana, which is a Schedule 1 drug, along with LSD, heroin and MDMA, commonly known as ecstasy. The federal government has found the dangers of abuse of those drugs outweigh any potential benefit. Yet doctors can prescribe potent and potentially addictive painkillers such as oxycodone, morphine and fentanyl.

On a recent evening at Compassionate Care, patients were allowed through the security door to make a purchase. Some conferred with Cady Riley, a wellness counselor and executive assistant to the CEO, while dispensary manager Tim Weigan showed a reporter around.

The plants are grown from clippings to ensure consistency and start out in a nursery before being taken out to the main floor under rows of intense lights. They are trimmed and cared for, but unlike other plants, the staff has to weigh and preserve every leaf that is trimmed for later destruction under state supervision.

Later, the plants are taken to a flowering room, where the light is reduced. The plants respond as though it is autumn, producing flower buds thatcontain tetrahydrocannabinol, or THC. The process takes four to six months, depending on the strain, Weigan said. Once dried, they are packaged for sale.

“Once we go through these doors, we go from ‘plants’ to ‘medicine.’ I emphasize that all the time,” Weigan said.

Since receiving state certification four years ago, the facility has sold close to 1,000 pounds of marijuana, according to a state report. It serves 2,661 patients.

A variety of strains are offered, some with names like ACDC, White Widow and Sour Banana Sherbet, which is particularly popular, Weigan said.

Patients pay $130 for a quarter of an ounce of bud, or $80 for the same weight of loose leaves, known as shake. An eighth of an ounce, which has long been a standard for marijuana sales, is $65 for bud, $40 for shake.

Because marijuana is illegal at the federal level, it’s a cash business. Any funds going through a federally insured bank could be subject to seizure. The state also makes getting loans and other financing difficult, Knowlton said.

“The startup was very rocky. We were deeply in debt. We’ve really been through an odyssey in getting this started. It was scary from the beginning,” Knowlton said. “We’re the pioneers that lived through this, and now we’re excited that we’re going to have the opportunity to care for more patients.”

Gov.-elect Phil Murphy said during his campaign he would legalize marijuana for recreational use. Should he?

LOWER TOWNSHIP — A property check near a convenience store in North Cape May led to a Millville man being charged with drug and weapon offenses.

In the near future, you may be able to ride your bike on designated paths and lanes from Somers Point to the Cape May-Lewes Ferry Terminal in …

Gov. Phil Murphy would like to legalize marijuana use for pleasure, so his recent executive order to study ways to expand New Jersey’s medical…

Barbara Merrifield filled a plastic syringe with marijuana oil, golden in color, and squeezed it into some muffin batter she whipped up in a b…