Collapse of the beach in Sea Isle City a mystery 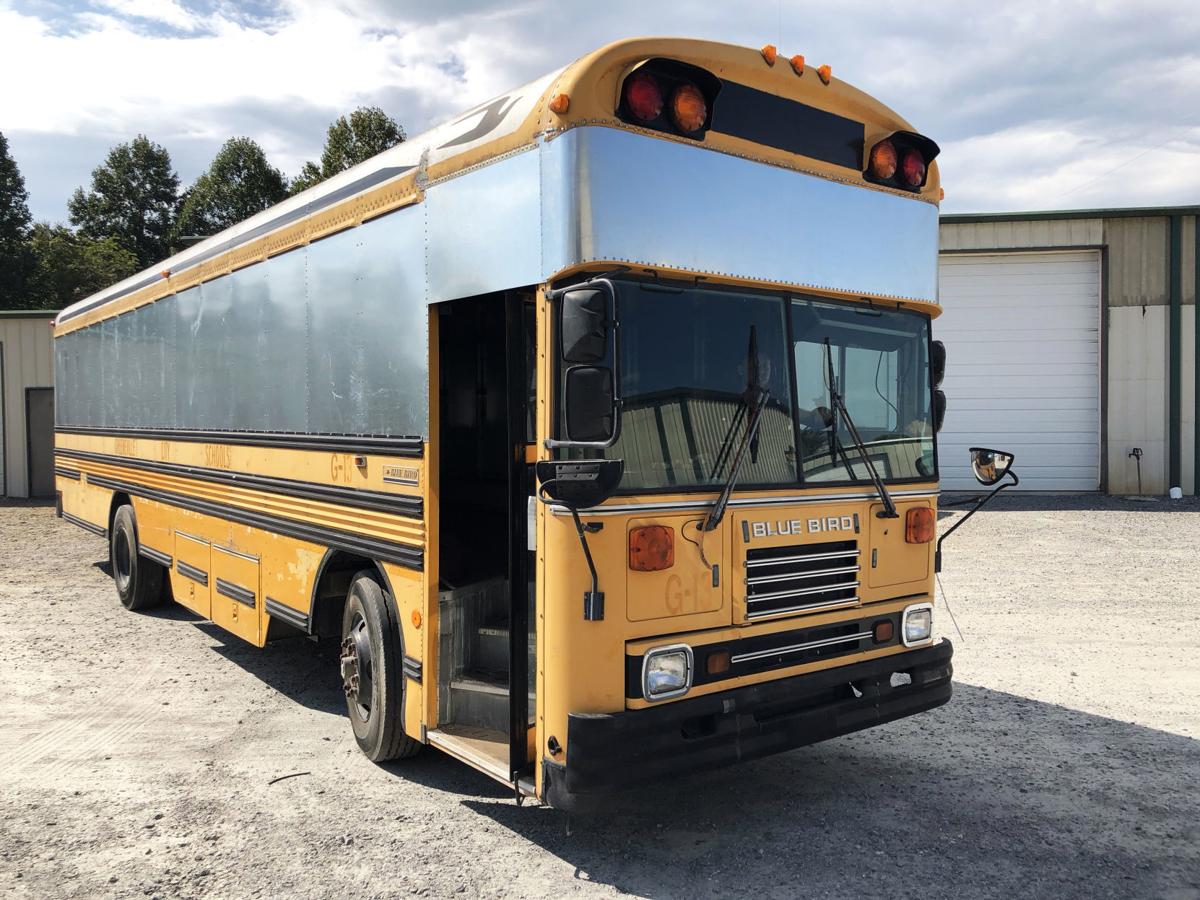 Nick and Francesca Drez hired Luke and Rachel Davis to make a skoolie- an old schoolbus outfitted as a home- for them. 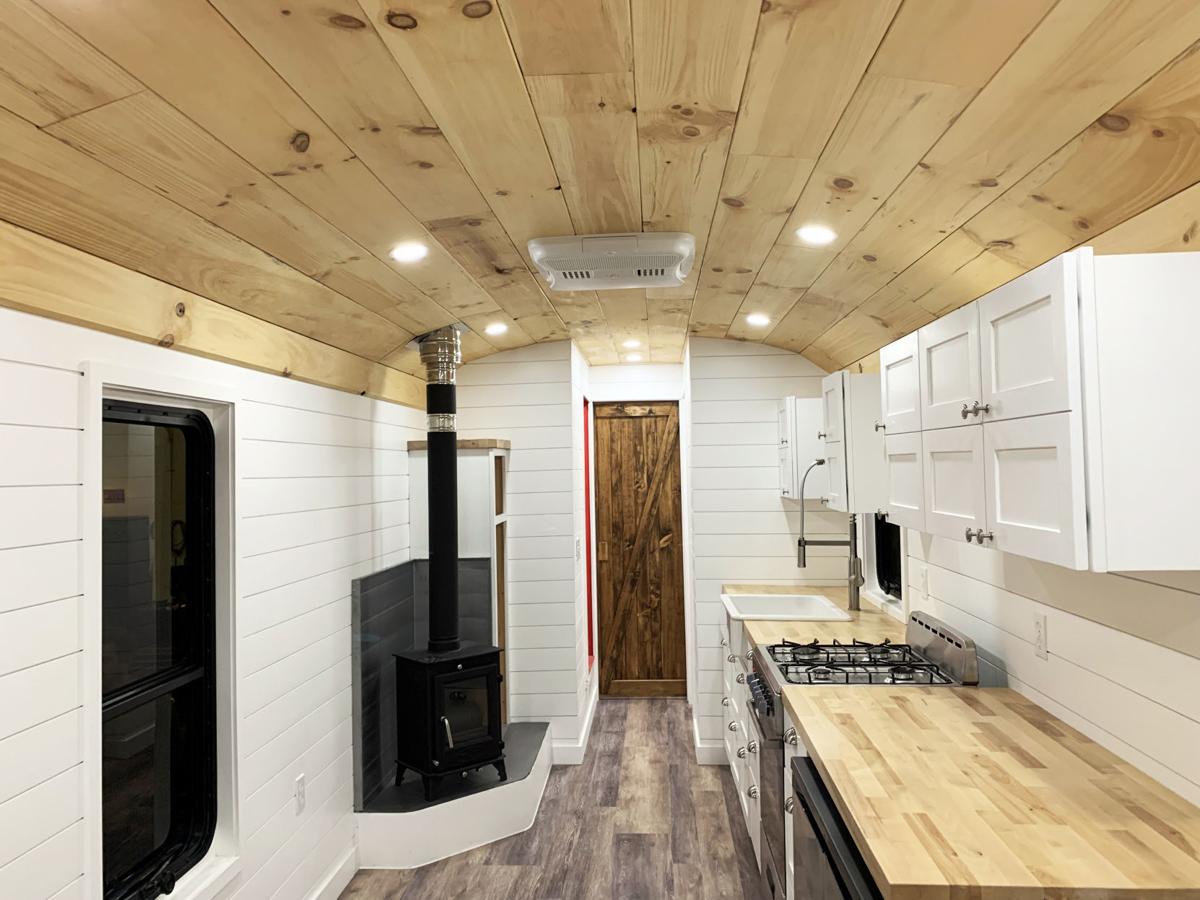 The kitchen has a propane-fueled oven, a stove with four burners and a side-by-side refrigerator-freezer. 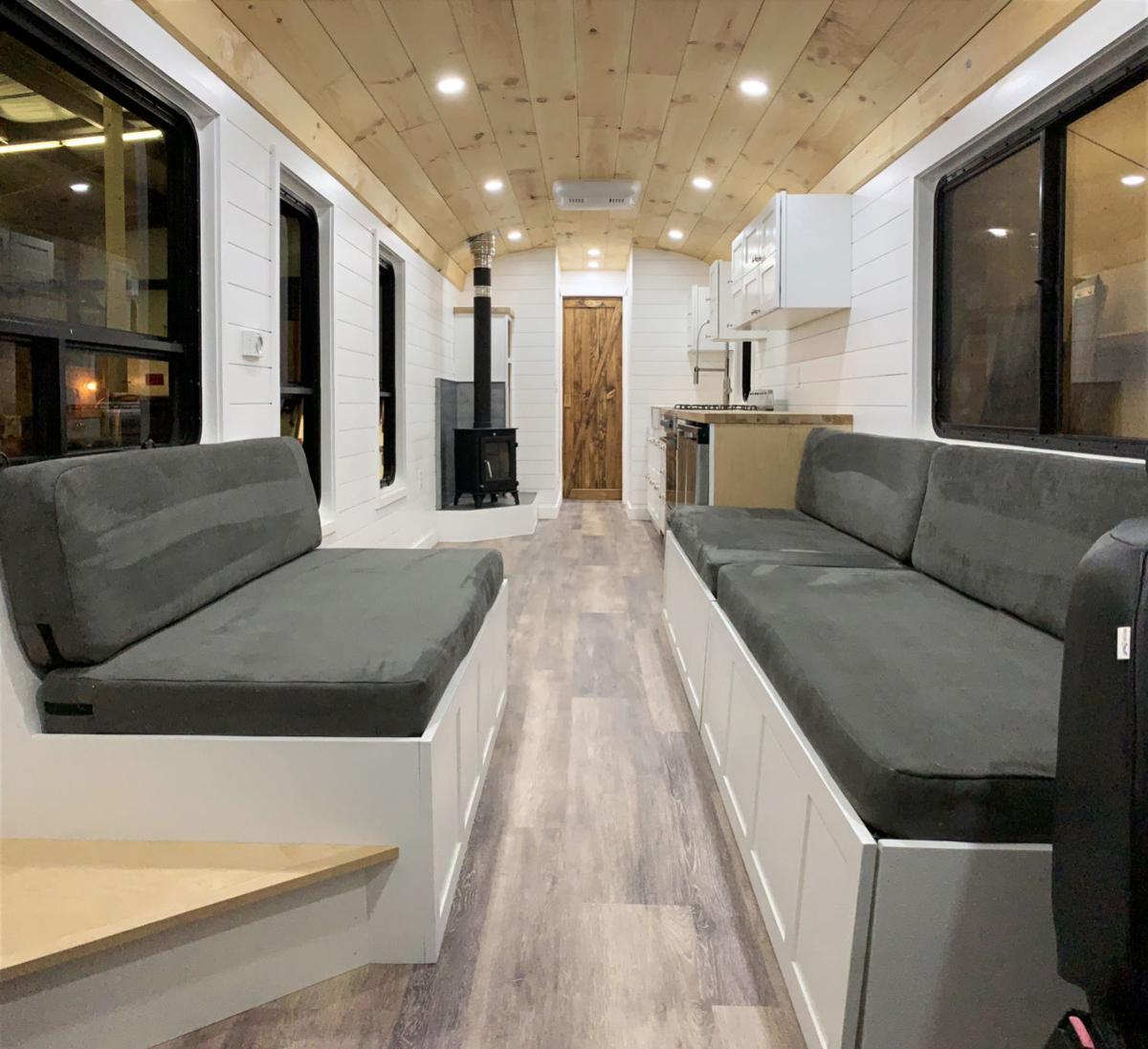 The skoolie of Nick and Francesca Drez features a 10-foot couch.

For now, Nick and Francesca Drez are happy in their home in the Denver area. But if they decide to relocate, they're all set. All they have to do is drive the whole home down the road. Launched in the 1970s as part of the hippie culture, the skoolie movement today is growing, encompassing smart, custom-crafted little homes that have handsome finishes and high-tech features enabling them to provide the comforts of home, the joys of mobility and the economies of living partially or totally off grid. With their full metal frame, robust structure, large tires and height above the ground, skoolies are regarded by many to be sturdier and safer than typical RVs.

Their home is on wheels but it's not a trailer. Nor is it a standard motor home or recreational vehicle (RV), which generally are pre-designed for camping or other occupancy.

Rather, it's a tiny, one-of-a-kind house that once was a school bus. Homes like this are called skoolies, and there are many of them around the country, especially in western states.

The Drezes, both 27 and married for three years, had been living in a 1,400-square-foot townhouse in the Chicago area, but it never felt right. For one thing, "the kitchen and one bedroom were all we used," Francesca Drez says.

After being in the house two years, many of their belongings remained in boxes, unneeded. For another thing, traditional homeownership was too expensive, with mortgage, utilities, homeowners' association fees and other costs. And, perhaps the most important factor, the couple dreamed of traveling - and of doing so before they were older and, as Francesca Drez says, "would not have as much energy to do things. We wanted to make our own path" now, she says.

The Drezes learned of skoolies while watching a documentary on Netflix about a couple traveling the United States in their converted school bus. They were sold on the idea. They started searching for people to help build a school bus conversion for them and found Luke and Rachel Davis.

The Davises not only lived in a school bus that they had converted into an appealing home, but also had chronicled their satisfying mobile life at Midwestwanderers.com and @midwestwanderers on Instagram. They also had started a business in Hendersonville, North Carolina, called Skoolie.com, that provides customized bus conversion services.

"The stars really lined up," Francesca Drez says. "Luke and Rachel were from Illinois, near us," which lent a sense of camaraderie, and the Davises' own bus included features appealing to the Drezes, such as a beautiful coffered ceiling, a raised roof - one of the few the Drezes found - and an open layout, which the Drezes needed because they have three dogs.

Francesca and Nick zeroed in on a 20-year-old school bus with 168,000 miles on it that they saw online and that Skoolie.com helped to evaluate.

Located in Greensboro, North Carolina, it was a 38-foot-long Blue Bird bus with a flat nose - yielding about an extra four square feet of usable space that a dog-nose bus doesn't have - and a Cummins diesel engine, the holy grail of engines for skoolies, Nick Drez says. The engine and all the mechanicals were in excellent condition.

So, too, was the metal body, and coming from central North Carolina it had none of the rust that often plagues vehicles from coastal areas that are awash in salty sea air. With a new alternator and tires, new oil filter, oil change and fluids, it was good to go.

Using a SoFi personal loan, the Drezes bought the bus in June 2018 for $5,000. Skoolie.com began the $55,000 gut-and-build months later. The total cost was "much cheaper than a house, an RV or an RV mortgage," Nick Drez says. In late January 2019, the Drezes moved in, choosing to do some of the finish work and build-out themselves over time. They sold their townhouse several months later and are on their way to paying off their loan, slashing monthly living expenses to about $800, fuel and food included, Nick Drez calculates.

The Davises opened Skoolie.com in December 2017. Rachel Davis says, "We were expecting two to three builds in 2018," but demand has been high. The company quickly booked through 2019 and is booked for most of 2020. The schedule includes about four full builds a year - each taking five or six months - plus many roof raises, numerous solar energy systems and dozens of parts fabrications for DIY customers. The four-person crew brings skills in metal fabrication and welding; plumbing, electrical, solar, gas and HVAC work; woodworking; design; bus sourcing; and evaluation.

School buses range in length from 16 to 40 feet; Skoolie.com has converted buses 27 to 40 feet long. The average price of a used bus is $4,000 to $10,000, Rachel Davis says, depending on the size, mileage, engine, transmission and body condition.

Skoolie.com customers have run the gamut from middle-aged couples, to owners with small and large pets, to families with as many as five children. The Davises share their own 220-square-foot bus with their two small children.

"About half of our customers bring a bus," Rachel Davis says, "and we've shopped on behalf of others." Some customers hand over all design and construction to Skoolie.com, reviewing the work via online updates every step of the way. Others want to do some of the work themselves.

Nick and Francesca Drez developed the design for their 220-square-foot bus interior using tape to outline the space on their townhouse floor and working with computer-aided design programs such as SketchUp and RoomSketcher. "We did a million different designs," Francesca Drez says, in the process determining "what are our necessities."

Their skoolie features a 10-foot couch that pulls out to a bed, standard-size kitchen cabinets and drawers, a small wood-burning stove, a propane-fueled oven and four burners, a side-by-side refrigerator-freezer, recessed LED lighting, a step-up shower and a composting toilet. Wood panels from the Blue Ridge Mountains run across the raised, almost eight-foot-high coffered ceiling, and white-painted shiplap covers the walls. The flooring is waterproof vinyl. Nick and Francesca finished the shower room with sheet-stone tile flooring and subway-style wall tiles.

An extra seven feet of space behind the brown barn door contains the couple's bedroom. The Drezes chose to leave this area unfinished, because they want to complete it themselves. Their temporary bedroom setup includes a full-size bed and eight-cube dresser. They hope to complete the space with a closet, a couch that opens to a bed and possibly a desk/office area.

Their skoolie could go totally off grid, Nick Drez says. "Most of our systems can run on gas and electricity," he says, but the five solar collectors produce enough watts to power the bus's needs for three to four days without sun. "The only energy sucker is the refrigerator, and it's not even that much." The Drezes have a portable generator as backup.

To live in a skoolie requires extreme downsizing. Even with their bus's generous undercarriage storage and other pockets of space, the Drezes pared down to the essentials and what they loved. Frequent trips to the laundromat make a tiny wardrobe possible. "There's an intention with everything, a purpose," Francesca Drez says, and that makes it "a lot easier for us." Nick Drez adds, "the freedom is very well worth the trade-off."

Having lived in the skoolie since January, Francesca Drez says it has become "truly a home." And after moving every week or two from one park or campground to another, the Drezes lucked out; they landed a spot with no hookups in an RV park that they rent on an affordable monthly basis and can leave and come back to. Though they are stationary now, they plan to travel the country in the future, which, they say, their new home makes possible.

In the District, Maggie Doctors has been less successful in finding a place to park a skoolie. She moved back to the area six years ago and bought a Tenleytown yoga business, Haute Bodhi Hot Yoga & Pilates, in 2016. She and her fiance want to reduce living expenses and have the option of living off grid, yet own a home. Buying a skoolie looked like the solution. Doctors searched online for a skoolie and found one in Georgia that she almost bought. "It was perfect," she says.

But Doctors passed it up because she couldn't locate a parking spot in the metro area. She says she hopes to find a property owner with space to rent such as a big driveway or unused farmland. "Until we meet the right person," she says, "we can't move forward" with buying a skoolie. Still, she says, "one way or the other I'm going to end up with one of those things."