Stephenine Dixon, of Atlantic City, with Mayor Pete Buttigieg at a caucus rally in Iowa on Feb. 1. Dixon will be state director for Buttigieg’s campaign in Alabama, she said Friday. 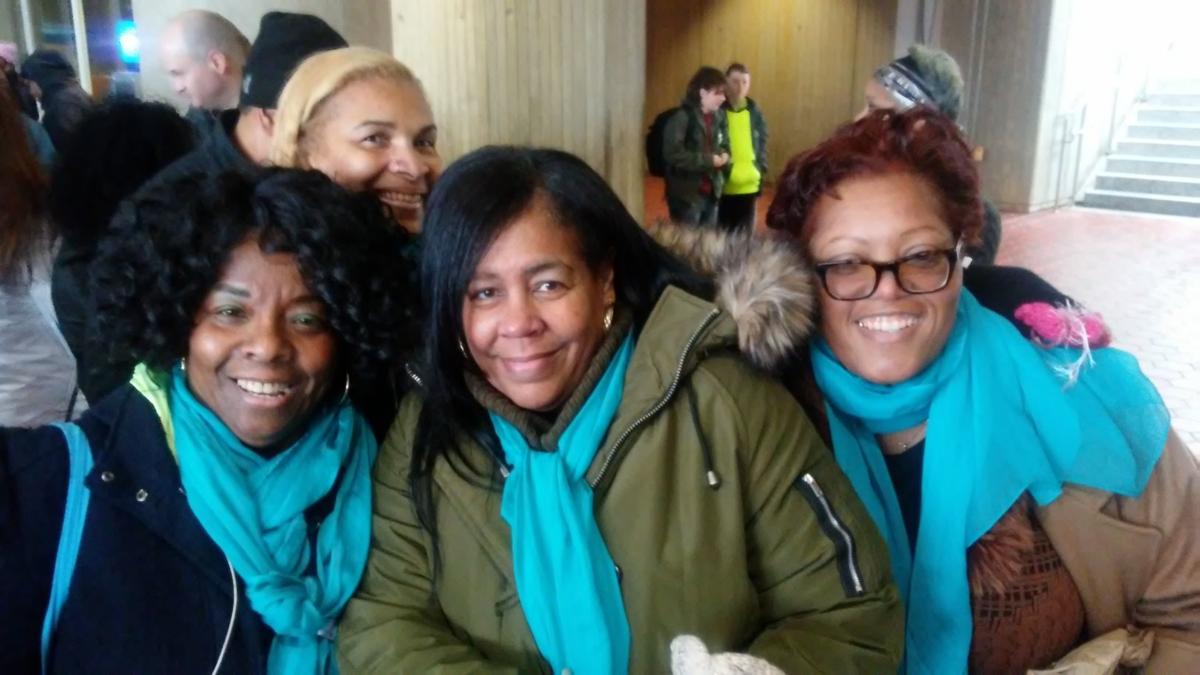 Debbie Pettuce Parker, left, Stephenine Dixon, Thelma Witherspoon and Yolanda Cooper, back, were part of a busload of 56 people from the South Jersey Democratic Women’s Forum who went to the Women’s March on Washington in 2017.

Stephenine Dixon, of Atlantic City, with Mayor Pete Buttigieg at a caucus rally in Iowa on Feb. 1. Dixon will be state director for Buttigieg’s campaign in Alabama, she said Friday.

Debbie Pettuce Parker, left, Stephenine Dixon, Thelma Witherspoon and Yolanda Cooper, back, were part of a busload of 56 people from the South Jersey Democratic Women’s Forum who went to the Women’s March on Washington in 2017.

Stephenine Dixon got her start in Atlantic City politics, and now can take credit for some of Mayor Pete Buttigieg’s success in the Iowa caucuses.

The 57-year-old mother and grandmother was regional organizing director for “Mayor Pete’s” presidential campaign, responsible for managing organizers in a large part of Iowa.

Now that the caucuses are over and Buttigieg appears to have at least tied for first place — after a computer glitch caused days of delay in releasing results — she will move on to be state director for the campaign in Alabama, she said Friday.

Women wear red, stay home or march during "A Day Without Women"

Local supporters added their voices to Wednesday’s A Day Without A Woman movement.

“I have organizers underneath me to get out the vote,” Dixon said. “We do all kind of canvasses, phone banks.”

Dixon cut her teeth on Atlantic City politics, she said, running successfully for the school board, then in a tough primary against Craig Callaway for City Council in 2003. She decided she liked organizing other people’s campaigns more than running herself, she said.

So she worked for City Councilman George Tibbitt for several years, and took time off for campaign work.

Tibbitt said he was impressed by Dixon when she ran against Callaway, losing by just two votes after a deluge of absentee votes came in for Callaway. Dixon alleged voter fraud by Callaway, but he managed to hold onto the win.

Locals join hundreds of thousands at Women's March on Washington

WASHINGTON — In a global exclamation of defiance and solidarity, more than 1 million people …

“She had this ‘no fear, no nonsense’ thing about her, going up against men and fighting for what she believed in,” Tibbitt said. “Her strength was her community participation. ... She had her finger on the pulse of the needs of everyone from children up to seniors. ... She took care of everything — if people didn’t have the money to pay bills, for food. ... A lot of times I did things I didn’t know I did.”

After about six years with Tibbitt, Dixon said she worked for the Atlantic City Registrar’s Office and in the Atlantic City police Detective Bureau, often doing campaign work during the day and her job in the evening.

“She helped me tremendously to get elected. She brought me to communities I would never have gotten to meet,” Tibbitt said. “It was a fabulous teamwork we had.”

“She was also very, very high up on the state of New Jersey Martin Luther King Jr. Commission,” Tibbitt said. “She went on the bus back and forth to Trenton to do the job she took on.”

“I have a passion for voter registration and getting people to vote. That’s keeping the legacy of King and his dream alive,” Dixon said. “People said, ‘Why go to Iowa?’ Why wouldn’t I? That was his dream for us all to be able to work hand in hand. It didn’t bother me about the (lack of) diversity. I know the skin I’m in, and I’m proud of the skin I’m in, so I came.”

Dixon first worked for Buttigieg in 2017, she said, on his campaign for chairmanship of the Democratic National Committee.

He didn’t win, but Dixon was impressed with his intellectual brilliance, his family-oriented campaign and his policies.

On Saturday night, the world of political polling and elections analysis experienced a compl…

“At that time, I knew if he ever ran for something again, I would be the first one to support him,” Dixon said. “His family was very hands-on — his mother and father were always there. He always walked with you instead of above you.”

She says she is tired of hearing that African Americans don’t support him.

“I’m saying, ‘What am I?’” she said. “Forty percent of our campaign workers are women of color. That’s why we were like, ‘Where is this coming from?’” Dixon said.

The only two black mayors in Iowa — Iowa City’s Bruce Teague and Waterloo’s Quentin Hart — have endorsed Buttiegieg, she said.

“Would you think they’d be endorsing somebody who doesn’t support them?”

Dixon was disappointed the Iowa results were so slow in being tabulated, and now are under a cloud of suspicion.

“I just feel like we’ve worked so hard seven days a week. … When we become victorious, it’s taken away. Not to have the numbers, to be able to claim our victory through a glitch, it kind of takes away the momentum.”

Dixon said the people who worked with her in Iowa were from all over the country, including New York, Pennsylvania, Chicago and Wisconsin.

“You have to really be passionate about this job,” she said. “You are only as good as the people you surround yourself with. I love my team. We have the best ground game team ever — I truly believe that.”

Hundreds from South Jersey heading to Washington for women's march

Busloads of people, mostly women, from South Jersey will trek to Washington, D.C., a day aft…

ATLANTIC CITY — The Rev. Al Sharpton will visit the city later this month to drum up support…