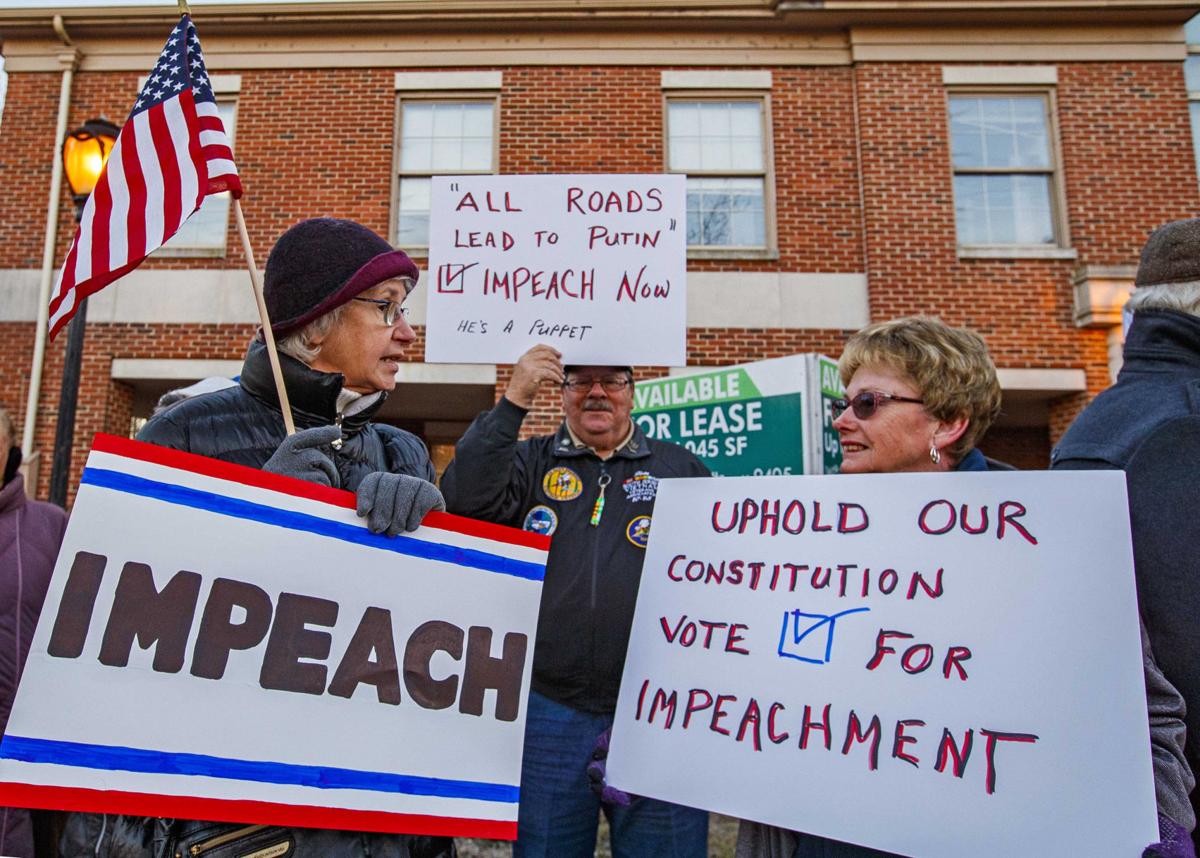 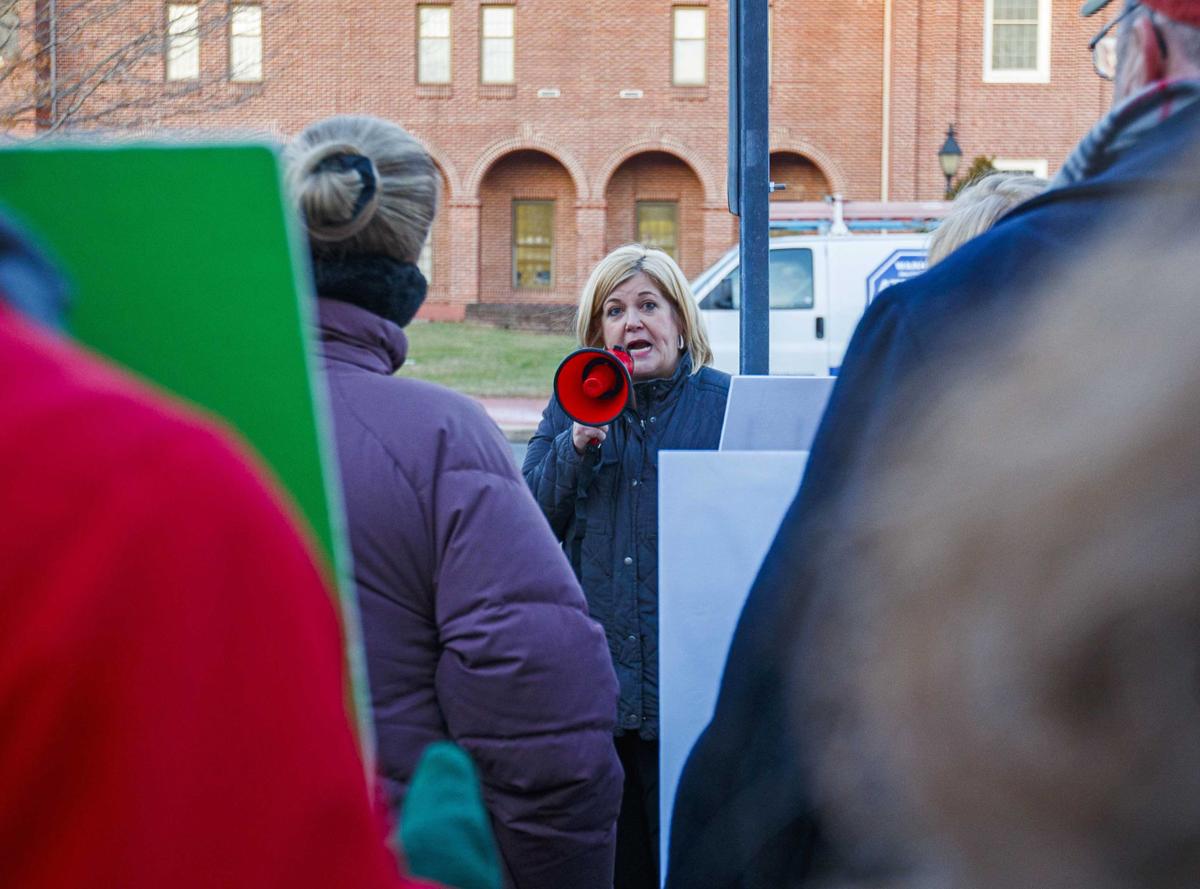 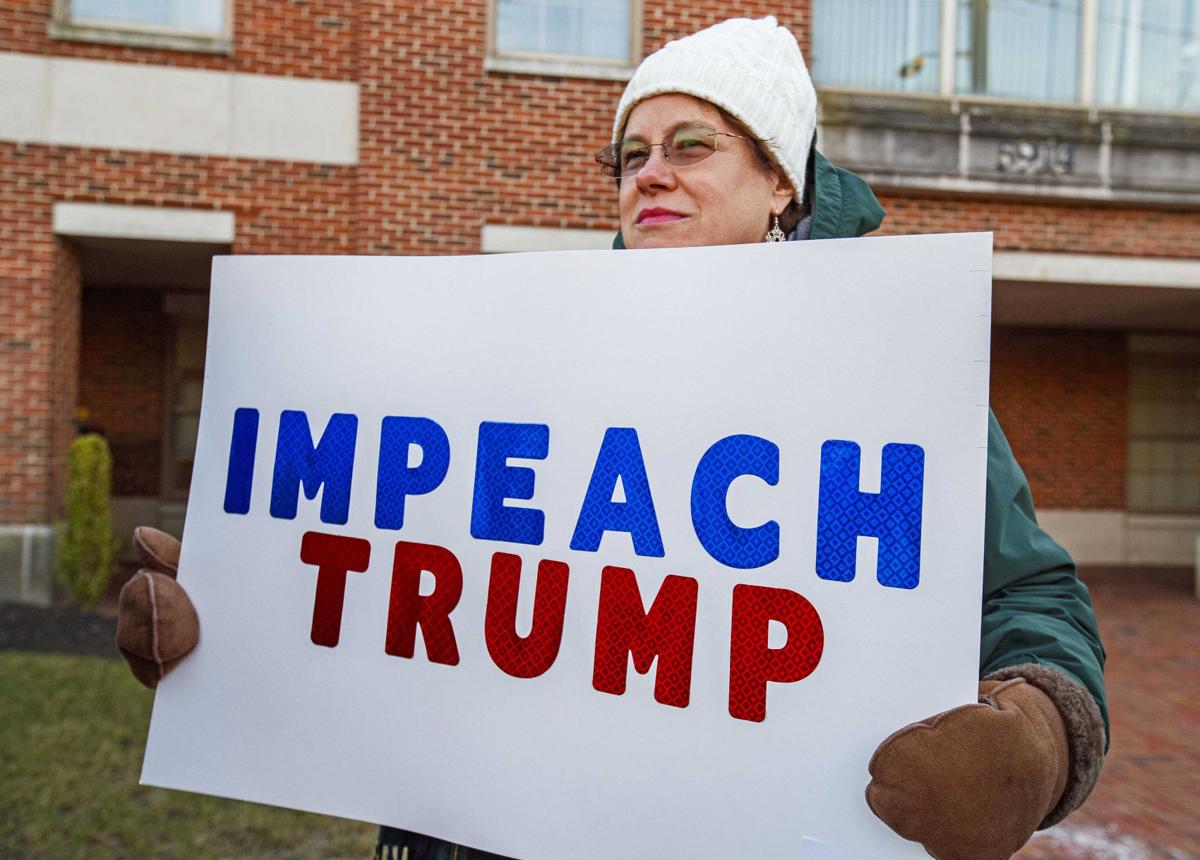 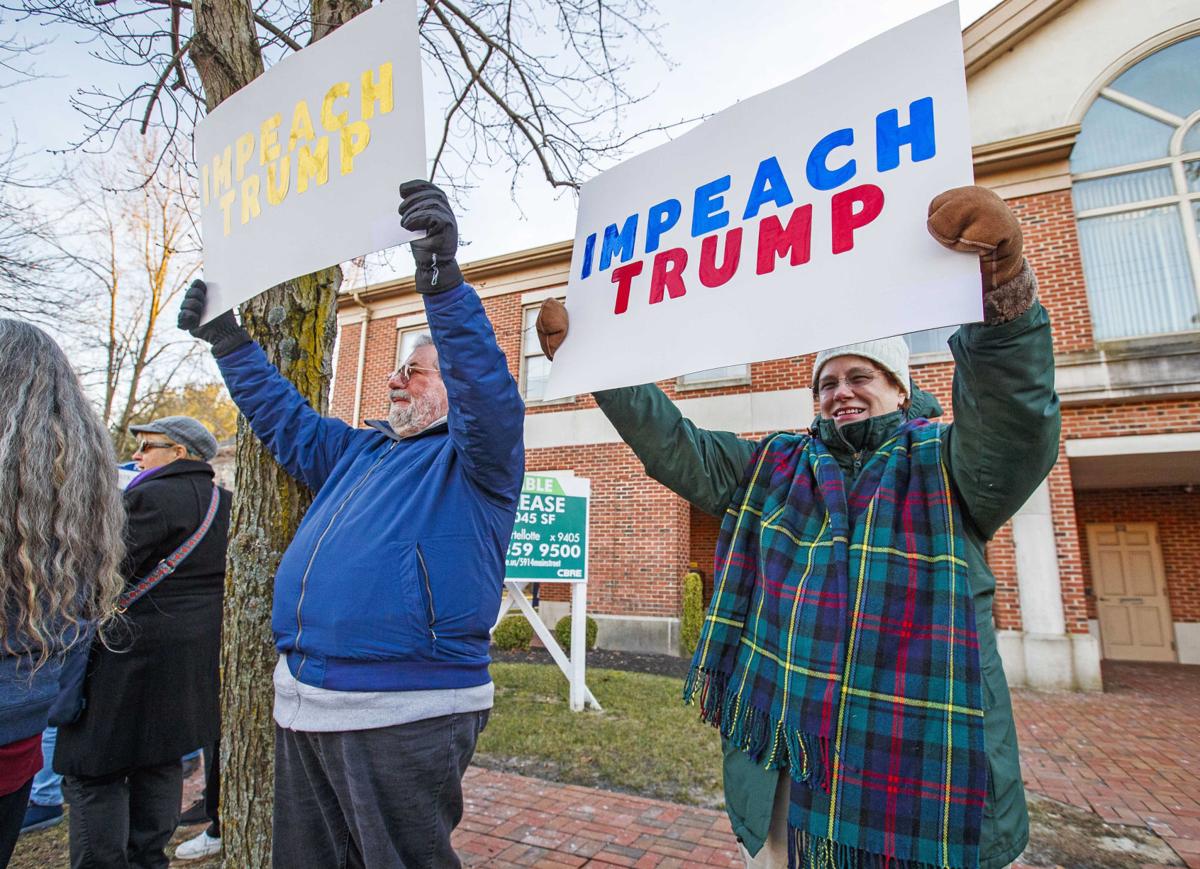 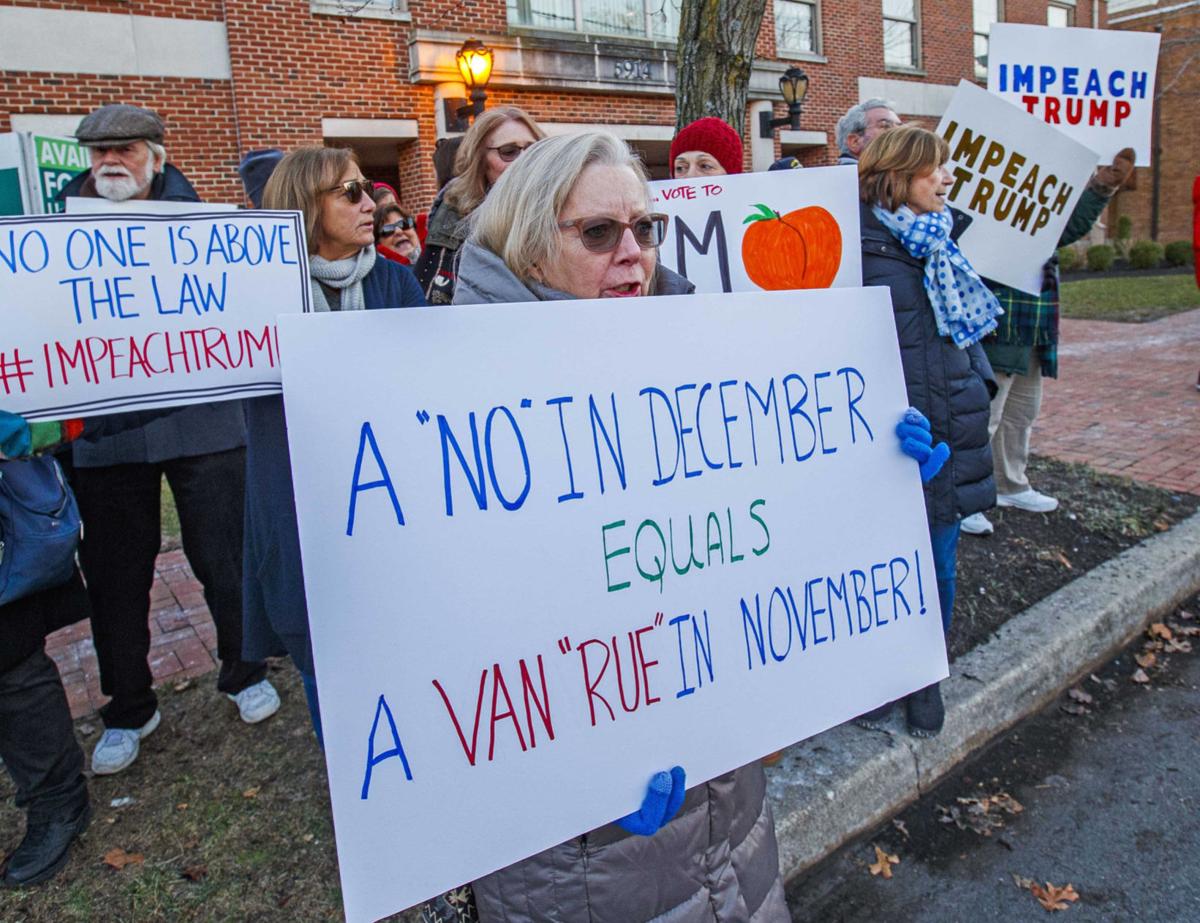 ‘Van Drew needs to uphold his oath to the Constitution,’ said retired Mainland Regional High School teacher Rebecca Harlan, center, of Ventnor. ‘The president’s actions are impeachable, and I think Van Drew should be a statesman, not a politician.’ 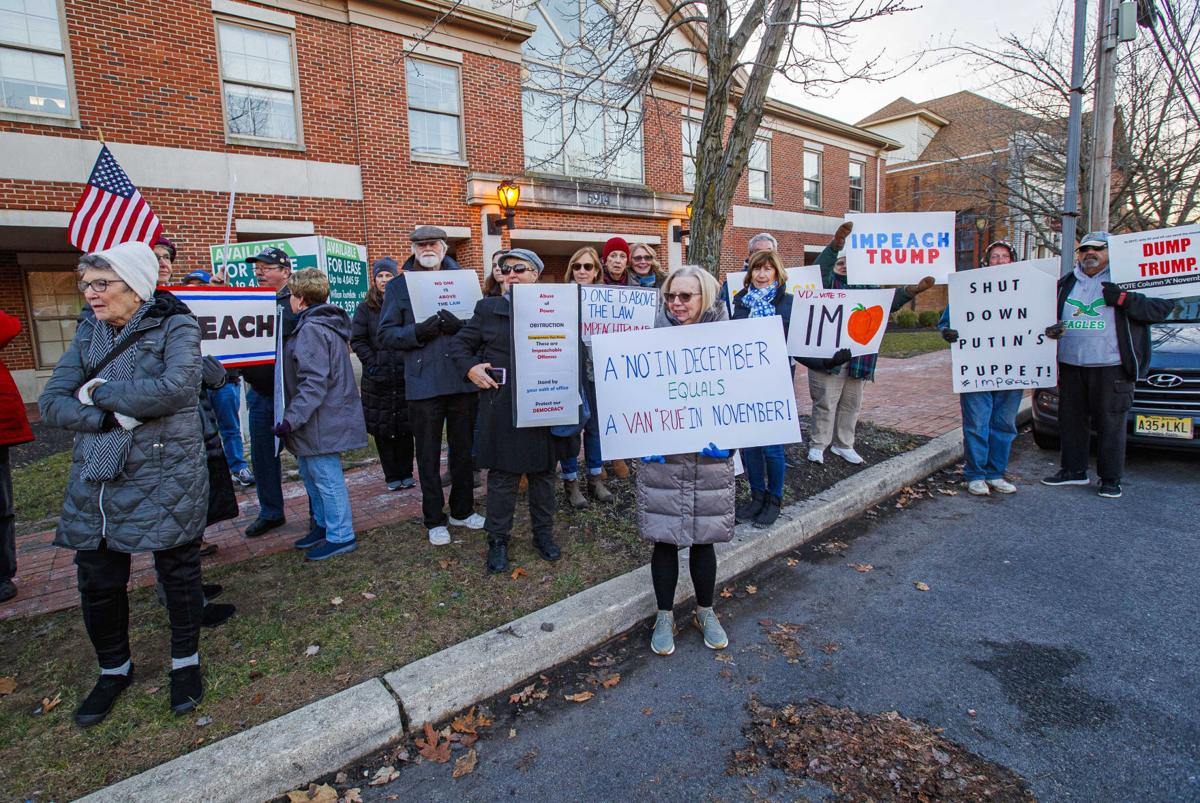 ‘Van Drew needs to uphold his oath to the Constitution,’ said retired Mainland Regional High School teacher Rebecca Harlan, center, of Ventnor. ‘The president’s actions are impeachable, and I think Van Drew should be a statesman, not a politician.’

MAYS LANDING — A group of protesters from across South Jersey protested outside U.S. Rep. Jeff Van Drew’s office Thursday afternoon, holding signs encouraging the Democrat to change his mind about voting no on impeachment of President Donald Trump.

“Hey, hey, ho, ho, Donald Trump has got to go,” the protesters chanted as cars drove by, many beeping in support and others slowing as drivers yelled their differences of opinion at the group.

“He’s put money in my pocket. I hope he gets re-elected,” one driver hollered about Trump.

Judge me on more than impeachment vote, Van Drew says

Van Drew said Thursday he remains opposed to impeachment because of its extremity and the fact that there is an election in less than a year.

“I have said all along a more appropriate vehicle would be censure,” Van Drew said. “Impeachment is literally taking people’s votes away, whether they agree with it or not. Millions in this case.”

He said the image of physically removing a president from office should make anyone stop and reconsider.

“That is just an amazing image when you think of it in your head and something in no way indicative of what we do in the U.S., unless someone is truly guilty of high crimes or treason,” Van Drew said. “Something really, really terrible.”

The protest was organized by United Progressive Democrats, said founder Elizabeth Volz, of Glassboro. Her group spans the 1st, 2nd and 3rd congressional districts, which cover most of South Jersey.

Van Drew’s 2nd District covers all of Cape May, Atlantic, Cumberland and Salem counties and parts of Gloucester, Camden, Ocean and Burlington counties. He runs for re-election next year.

“Van Drew needs to uphold his oath to the Constitution,” said retired Mainland Regional High School teacher Rebecca Harlan, of Ventnor. “The president’s actions are impeachable, and I think Van Drew should be a statesman, not a politician.”

Harlan called Van Drew a “Republican in Democrat’s clothing,” citing his support from the National Rifle Association, and predicting he will be defeated next year.

Longport’s Brigid Callahan Harrison, a Montclair University professor who has said she might mount a Democratic primary challenge to Van Drew, came out to support the group.

She said in her career, no issue has been as important as the impeachment of Trump.

“He has a constitutional responsibility and has neglected his duties,” Callahan Harrison said, adding Senate President Steve Sweeney has said he isn’t sure whether he will support Van Drew’s candidacy or not.

She said she will make up her mind about challenging Van Drew after she sees how he votes, probably next week, on the House impeachment.

“Maybe this will have some effect,” she said of the protest.

Tom and Ruth Huck traveled from Vineland to participate and said since retiring they have dedicated much of their time to political work. They helped increase the use of mail-in ballots, they said, by volunteering to get Democrats who haven’t voted regularly to vote by mail.

“I want to let (Van Drew) know the reason he won was the Democrats came out,” Tom Huck said. “Now, he’s turned his back on us.”

Republicans swept the 1st District legislative race and almost won in the 2nd, despite being…

Ruth Huck said the congressman should have gotten the message when Team Van Drew, the group of Democrats running for re-election to the state Assembly and Senate in the 1st Legislative District, lost in this November’s election.

“I did vote for the team, but we know a lot of people who skipped (the election),” Ruth Huck said.

Van Drew said he was unable to watch much of the impeachment debate Thursday in the House Judiciary Committee because the House took many votes, including one on a measure to lower pharmaceutical drug costs in part by allowing Medicare to negotiate with drug companies. It passed the House, he said.

“These are the kinds of things we should be doing,” Van Drew said.

Three Republicans have said they will run for the right to challenge Van Drew in 2020, stressing he votes overwhelmingly with fellow Democrats.

There are more registered Republicans than Democrats in the 2nd Congressional District, but independents outnumber each.

HAMILTON TOWNSHIP — The electricity was out for several hours Friday evening in the township’s major shopping area.

Advocates are celebrating a bill that passed the House last week to lower pharmaceutical prices by, among other things, allowing Medicare to n…

If Congressman Jeff Van Drew, D-2nd, switches parties and runs for re-election as a Republican backed by President Donald Trump, he will not h…

If Congressman Jeff Van Drew, D-2nd, switches parties and runs for re-election as a Republican backed by President Donald Trump, he will not h…

Five staff members of U.S. Rep. Jeff Van Drew, D-2nd, resigned Sunday via a letter to Chief of Staff Allison Murphy, and others were reported …

A woman is likely to be the Democratic nominee for the 2nd Congressional District seat held by U.S. Rep. Jeff Van Drew, who is expected to soo…

“Hey, hey, ho, ho, Van Drew way to go.” I’m glad we have at least one Democrat with smarts. Too many intelligent Democrats have none. They are oxymorons — intelligent but stupid.

The reader’s comment about getting only $200 in not only wrong about the “only” families got much more. However, $200 to a poor family means more than thousands to the rich. Actually, President Trump has done more for the poor and underprivileged— jobs, higher wages, no need for embarrassing food stamps, etc., etc.

As for Van Drew’s vote, think logic versus emotion — he thinks like a moderate conservative.

How many thousands of dollars to a billionaire is the equivalent amount of $200 to a poor person.

Also to end food stamps to the poor so as not to embarrass them is ignorant and lacking any evidence of humility or compassion.

Try going without food yourself before you recommend it to others.

Embarrassment Is irrelevant when one is hungry.

Any sympathy for the hungry children affected by Adolph Twittler’s policy?

Censuring the President would be perfectly appropriate if his conduct did not involve the carrying out of his official acts (just as Clinton should have been censured because the act he carried out was giving a deposition in a private lawsuit, not his acts as president) but, impeachment is appropriate for Mr. Trump's conduct because he was performing his official duties as president when the questionable conduct occurred.

So Trump put some money in a guy's pocket? Yeah, maybe $200 per year on average, but millions in the 1%'s pockets. Meantime, the Dems have 17 sworn statements from honest, honorable people about Trump, and the other side just whines about the process and gags other witnesses.

Van Drew needs to do the will of the people who voted for him. If he doesn't he'll be a one term Congressman. Maybe he doesn't like Washington politics and this is his way out; to turn against his party.. The Dems will have to find a viable candidate in his stead.

If Trump is not impeached he’ll either declare its results null and void if he loses. Additionally Putin will do everything in his power to insure that his boy Trump wins.

Van Drew’s actions are purely based on what will help him move up the political food chain. No place for integrity, justice or simply doing the “right thing.” He is a political creature that has no sense of decency.