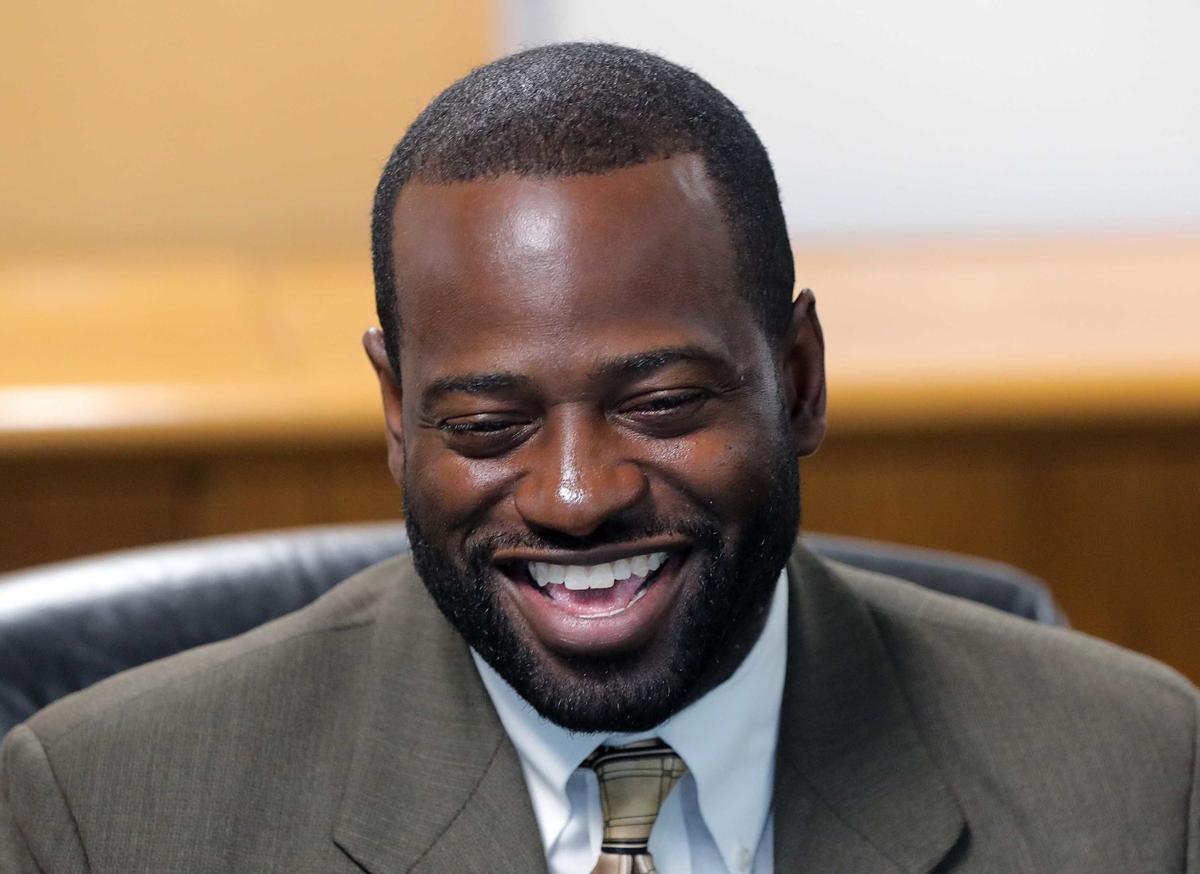 Antwan McClellan, an assistant to Cape May County Sheriff Robert Nolan, was in the lead for Assembly after the machine vote and the counting of most mail-in votes, along with running mates Michael Testa for state Senate and Erik Simonsen for Assembly.

Antwan McClellan, an assistant to Cape May County Sheriff Robert Nolan, was in the lead for Assembly after the machine vote and the counting of most mail-in votes, along with running mates Michael Testa for state Senate and Erik Simonsen for Assembly.

Ocean City Councilman Antwan McClellan will be the first African American to represent the state’s 1st Legislative District after a Republican sweep Tuesday.

McClellan was in the lead after the machine vote and the counting of most mail-in votes, along with running mates Michael Testa for state Senate and Erik Simonsen for Assembly.

“This was a historic election,” said campaign manager, Brittany O’Neill, adding McClellan will also be the only black Republican in the state Legislature.

And Testa, a Vineland attorney and the Cumberland County Republican chairman, is the first Republican in New Jersey to flip a Democratic Senate seat in 12 years, said campaign strategist Chris Russell.

The Democratic incumbents — Sen. Bob Andrzejczak and Assemblymen Bruce Land and Matt Milam — have conceded the election, and Milam said he reached out Wednesday to the winning assemblymen-elect and offered to help in any way he can.

“If they need anything — transitional-type things — if I can be of any help, they’ll have help,” Milam said. “We share cellphone numbers, and that’s how it should be. We have to stay united.”

The 1st District covers all of Cape May County and portions of Cumberland and Atlantic counties.

McClellan said his election wasn’t about his race, but he called diversity in the district’s representatives “extremely important.”

“There has got to be a voice for everyone. There can’t be if you don’t have the representation,” McClellan said.

McClellan works for Cape May County Sheriff Robert Nolan and said the two are taking some time off and when they get back will discuss how McClellan’s work schedule will accommodate his Assembly schedule.

The House of Representatives voted on rules to proceed with impeachment proceedings against President Donald J. Trump, and Gov. Phil Murphy’s attorney general issued a demand that Cape May County end its cooperative agreement with federal Immigration and Customs Enforcement.

“Clearly the Republicans were better at getting their people out than the Democrats were,” Froonjian said. “As popular as he’s been, (U.S. Rep.) Jeff Van Drew has not able to transfer his political capital to a team when he’s not on the ballot.”

How mail-in ballots are expected to affect this year's elections

Pundits are predicting low turnout for Tuesday’s election in New Jersey, based on the Assemb…

Van Drew, D-2nd, held the state Senate seat in the 1st District for years, then left it to enter Congress Jan. 1.

Turnout was about 35% in the 1st District, which is low, but more than the 2nd District’s 25%, Froonjian said. It’s about typical in each district for races with the Assembly at the top of the ticket, he said.

There are still provisional votes and mail-in ballots to count, but the Republican lead is likely to hold and results to be certified soon.

The 1st District had long been a GOP stronghold. But Democrat Van Drew was elected as an assemblyman and senator, and had built a strong moderate-conservative Democratic team there.

“We hope they do the best they can for the district,” Rivers said.

But they will face an uphill battle, he said, being in the minority party in the Assembly and Senate. Democrats dominate both houses.

“We were pretty confident. We knew it was going to be close,” Russell said of the Testa team. “We felt it on the ground throughout the campaign — the energy behind Mike and behind the two (Assembly candidates).”

O’Neill remained confident of a Republican victory as well, she said. When a Stockton poll came out about a week before the election saying Testa was down by 14 points, she predicted the polling institute would have to issue an apology after the election.

“At the end of the day, South Jersey families can see through lies and smears that come out of Camden County,” she said of a political action committee tied to Democratic powerbroker George Norcross.

“Michael’s done a good job (showing himself) as a likable man and an incredible guy,” O’Neill said.

Cape May County officials announced the start of work to rebuild and repair the Ingram Thorofare Bridge on Wednesday, advising drivers to take…

Editor's note: This story has been updated to clarify that the Republican candidates for Assembly won more votes in Cape May and Atlantic coun…

Hughes Center to embark on civility project for 2020 elections

GALLOWAY TOWNSHIP — It won’t make this year’s Thanksgiving and holiday dinners less uncomfortable, but a plan to increase civility in South Je…

MAYS LANDING — After counting most of the remaining mail-in ballots Wednesday, Democrats Vince Mazzeo and John Armato increased their lead in …

South Jersey residents divided over impeachment hearings, but most find them hard to follow

ATLANTIC CITY — When he has a customer in his chair, barber Abdullah Anderson tries to keep political conversation to a minimum.

Republicans believe they have a good shot at unseating U.S. Rep. Jeff Van Drew, D-2nd, next year, after defeating Democratic state Senate and …

Van Drew still a no on impeachment, without "something new and amazing"

Van Drew vows to stay a Democrat, even as he opposes impeachment

U.S. Rep. Jeff Van Drew, D-2nd, reassured constituents Thursday night he has been a Democrat all his life and will remain one, even as he cont…

State Sen.-elect Mike Testa Jr. does not support a bill sponsored by his predecessor to fund boardwalk repairs through the state Transportatio…

Republicans swept the 1st District legislative race and almost won in the 2nd, despite being outspent about 3:1 by Democrats, according to a T…

OCEAN CITY — Since January, when Antwan McClellan took office in Trenton as an assemblyman, a seat on City Council has been vacant.