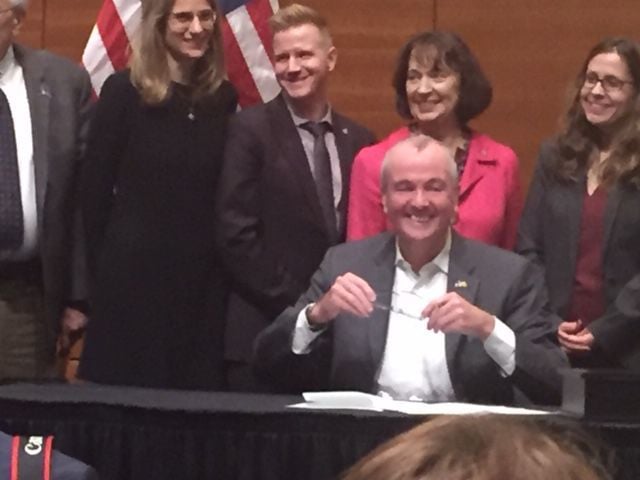 Gov. Phil Murphy prepares to sign Executive Order No. 100, to revamp how the state regulates energy and construction in the state, Monday at Stockton University. The order is in conjunction with the release of the state’s new Energy Master Plan, to reduce emissions of greenhouse gasses to mitigate climate change and sea level rise. 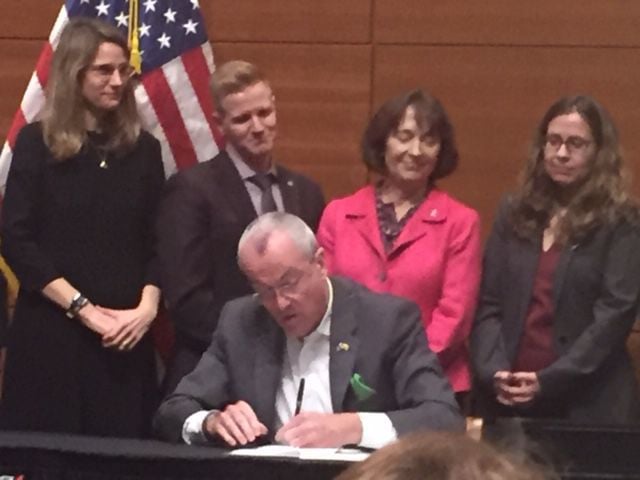 New Jersey Gov. Phil Murphy signs Executive Order No. 100, to revamp how the state regulates energy and construction in the state, at Stockton University Monday. The order is in conjunction with the release of the state's new Energy Master Plan, to reduce emissions of greenhouse gasses to mitigate climate change and sea level rise.

Gov. Phil Murphy prepares to sign Executive Order No. 100, to revamp how the state regulates energy and construction in the state, Monday at Stockton University. The order is in conjunction with the release of the state’s new Energy Master Plan, to reduce emissions of greenhouse gasses to mitigate climate change and sea level rise.

New Jersey Gov. Phil Murphy signs Executive Order No. 100, to revamp how the state regulates energy and construction in the state, at Stockton University Monday. The order is in conjunction with the release of the state's new Energy Master Plan, to reduce emissions of greenhouse gasses to mitigate climate change and sea level rise.

GALLOWAY TOWNSHIP — The state will restrict building in flood prone areas as it works to become a a 100 percent clean energy state by 2050, in response to climate change and rising sea levels.

Gov. Phil Murphy announced the state’s new Energy Master Plan at Stockton University on Monday, and signed an executive order to change the way the state regulates energy and construction.

Clean energy will include nuclear power, according to state spokespeople who conducted a technical call for the media before the governor’s news conference.

“We must heed the warnings science is giving us,” Murphy said of Rutgers University studies finding that sea level could rise as much as 1 foot by 2030, 2 feet by 2050 and 6 feet by 2100.

Sea level rise is already “eroding the shore economy,” Murphy said, with frequent flooding and damage to beaches. Further sea level rise is inevitable up to 2050, because of carbon already in the atmosphere. But changes made in emissions of greenhouse gases could lessen sea level rise in the second half of the century, he said.

“It’s hard for future generations to create Jersey Shore memories if the Jersey Shore itself becomes no more than a memory,” Murphy said.

The New Jersey Conservation Foundation’s Tom Gilbert called the plan a “game changer — a new direction from the previous administration that puts the state on exactly the right path we need to be on ... (moving) away from fossil fuels and towards building a clean energy future.”

“Gov. Phil Murphy ... is putting New Jersey at the forefront of climate action by requiring developers to consider their environmental impact before they build,” Potosnak said.

Tittel also said it will take so long for the regulations to be finalized, many fossil fuel projects currently in the planning stages may be built before the plans regulations are done.

PACT stands for Protect Against Climate Threats, and it will include drastically cutting emissions of greenhouse gasses and other climate pollutants, and transform land use and planning policies to adapt the state to threats from sea-level rise, extreme weather and chronic flooding.

Murphy said it’s important to wean ourselves from fossil fuels, for environmental and health reasons.

He said asthma rates are much higher in cities like Newark and Atlantic City, hitting minority communities hardest.

“In Atlantic County, the African American population is only 14 percent, but (that) population represents 42% of asthma-related emergency room visits,” Murphy said. “We’ve been too slow to change our ways.”

Murphy did not talk about the cost of the plan, and took no questions after his talk.

Patty Cronheim of Rethink Energy NJ said Rutgers is working on a report on costs.

But Murphy did say he believes it will help the economy.

“We are going to make New Jersey a place that proves you can grow the economy and create good jobs and wages — with overwhelmingly union jobs,” he said, while moving to a clean energy future.

“While the ambitious goals set forth in today’s announcement are laudable, we remain very concerned by the overall cost impacts to ratepayers and businesses in the execution of this plan — particularly as there has yet to be a ratepayer impact study,” Cantor said.

“Additionally, we question the feasibility and reliability of a rushed abandonment of the use of natural gas, an energy source that heats more than 75% of New Jersey’s homes and businesses, and generates more than 50% of our electricity,” Cantor said.

There will be stakeholder meetings during the regulatory development period, state spokespeople said.

Murphy said New Jersey is the first state to embark on such a large scale energy plan and rulemaking process.

No one seems happy with New Jersey’s draft Energy Master Plan, which attempts to describe a …

Joseph Fiordaliso, president of the state Board of Public Utilities, wasn’t exaggerating whe…

ATLANTIC CITY — The 1,100 megawatt Ocean Wind offshore wind farm to be built off the coast h…

Sea level along the New Jersey coast has risen 1.5 feet, more than twice the global average …

By the dawn of the next century, South Jersey’s barrier islands will pretty much disappear a…

Andrea Palermo’s life has taken on the ups and downs of the tides she follows on her phone app.

Strategy 4: Reduce Energy Consumption and Emissions from the Building Sector through decarbonization and electrification of new and existing buildings, including the expansion of statewide net-zero carbon homes incentive programs, the development of EV-ready and Demand Response-ready building codes, and a long-term building decarbonization roadmap.

Strategy 7: Expand the Clean Energy Innovation Economy by increasing  clean energy jobs and investing in developing clean energy knowledge, services, and products that can be exported to other regions.

NJ PACT will usher in systemic change, modernize air emissions and environmental land use regulations, to enable government, businesses, and residents to respond to current climate threats, and reduce future climate damages. It will dramatically cut emissions of greenhouse gasses and short-lived climate pollutants and transform land use and planning policies to adapt to unavoidable impacts, such as sea-level rise, extreme weather, and chronic flooding.

Over the next two years, the Department of Environmental Protection will create a regulatory roadmap to reduce emissions, build resilience, and adapt to a changing climate. The DEP will:

• Complete a comprehensive accounting of greenhouse gas emissions that will enable New Jersey to focus on priority pollutants and limit them aggressively to meet our goals of reducing emissions to 80 percent below 2006 levels by 2050;

• Ensure that projects built with public funds integrate climate resilience measures so taxpayer dollars are put to good use.

--SOURCE: State of New Jersey Governor's Office, Board of Public Utilities and DEP

Galloway crash splits car in half

GALLOWAY TOWNSHIP — Two men were injured Monday after a car hit a tree and split in half, police said.

NEW BRUNSWICK — The new president of New Jersey’s flagship university will make nearly $1.2 million in the next school year as part of a compe…

Murphy: Electric car incentive app could be ready by June

TRENTON — Consumers hoping to cash in on New Jersey’s new electric vehicle incentives will have to wait, but if consumers bought eligible vehi…

Another nail in the welcome to New Jersey business plan.