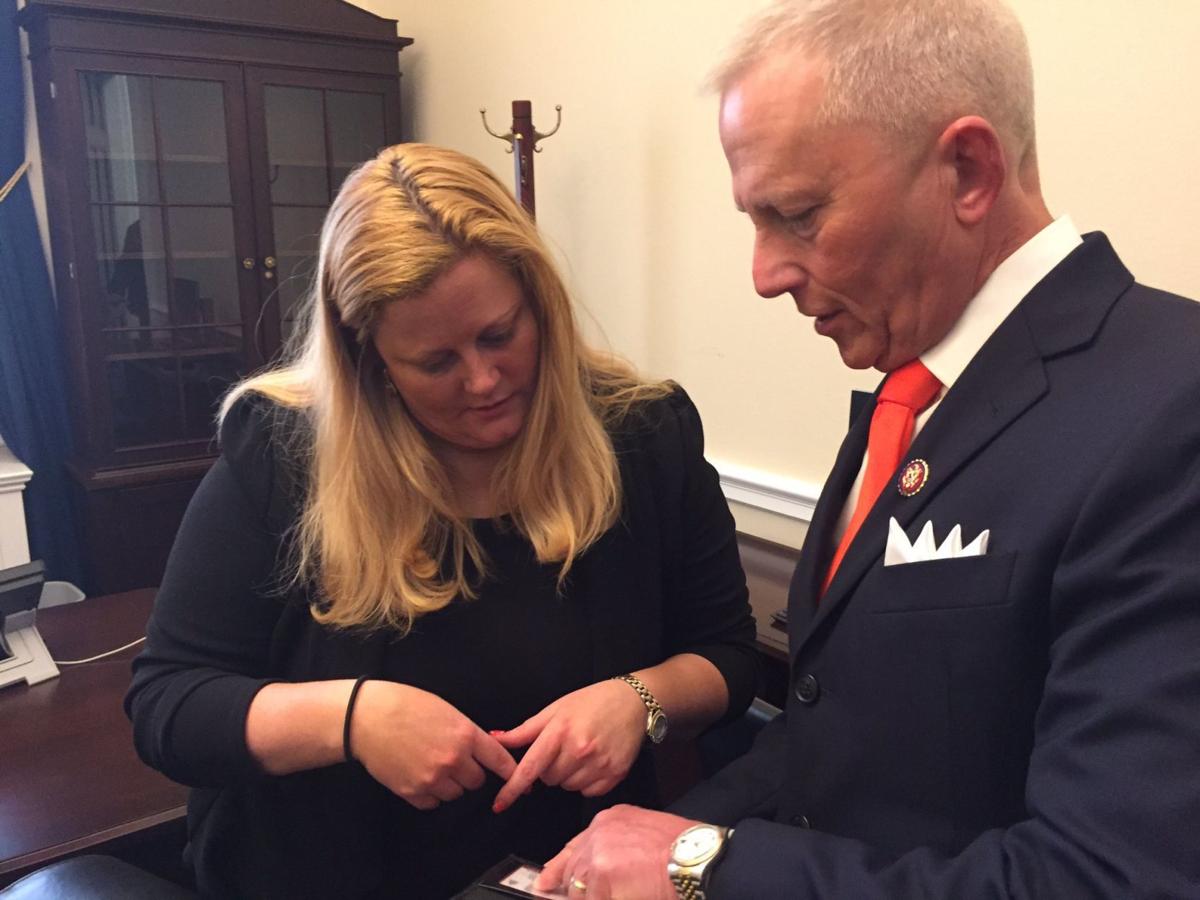 Chief of staff Allison Murphy surprised new U.S. Rep. Jeff Van Drew on Thursday with a name plate for the desk in his Washington office. 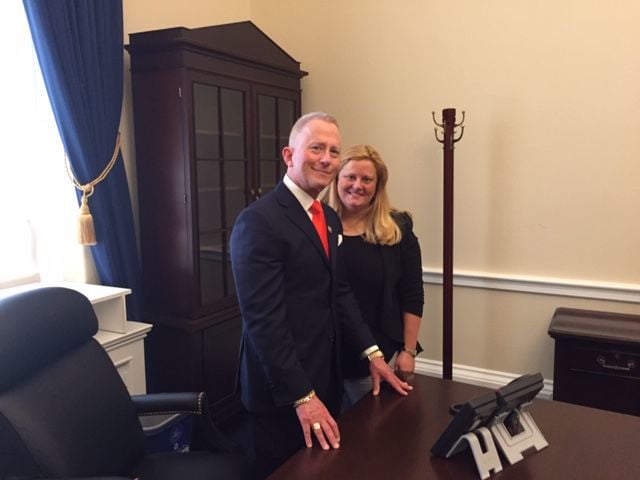 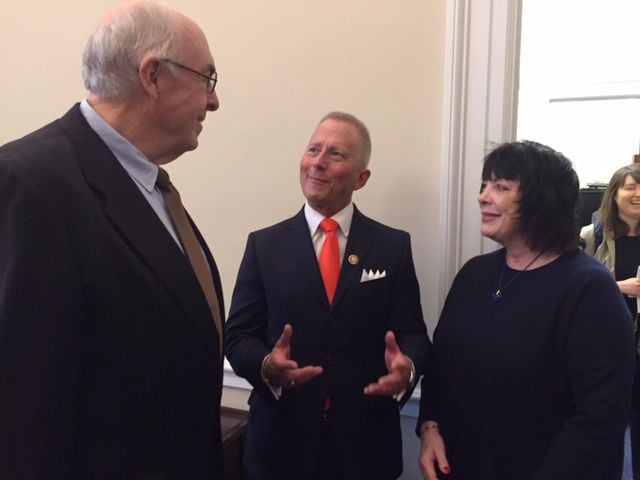 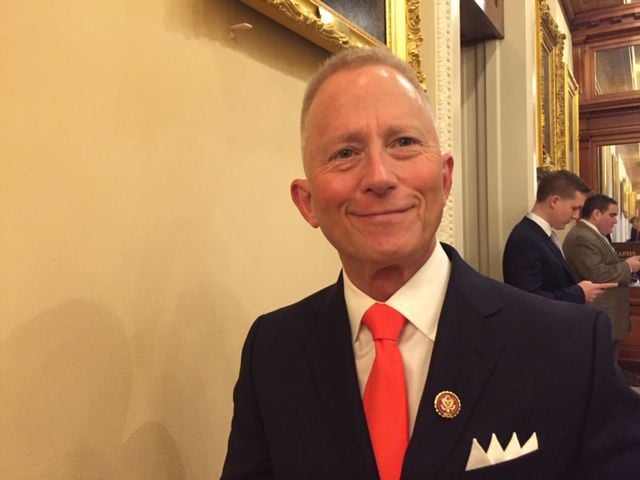 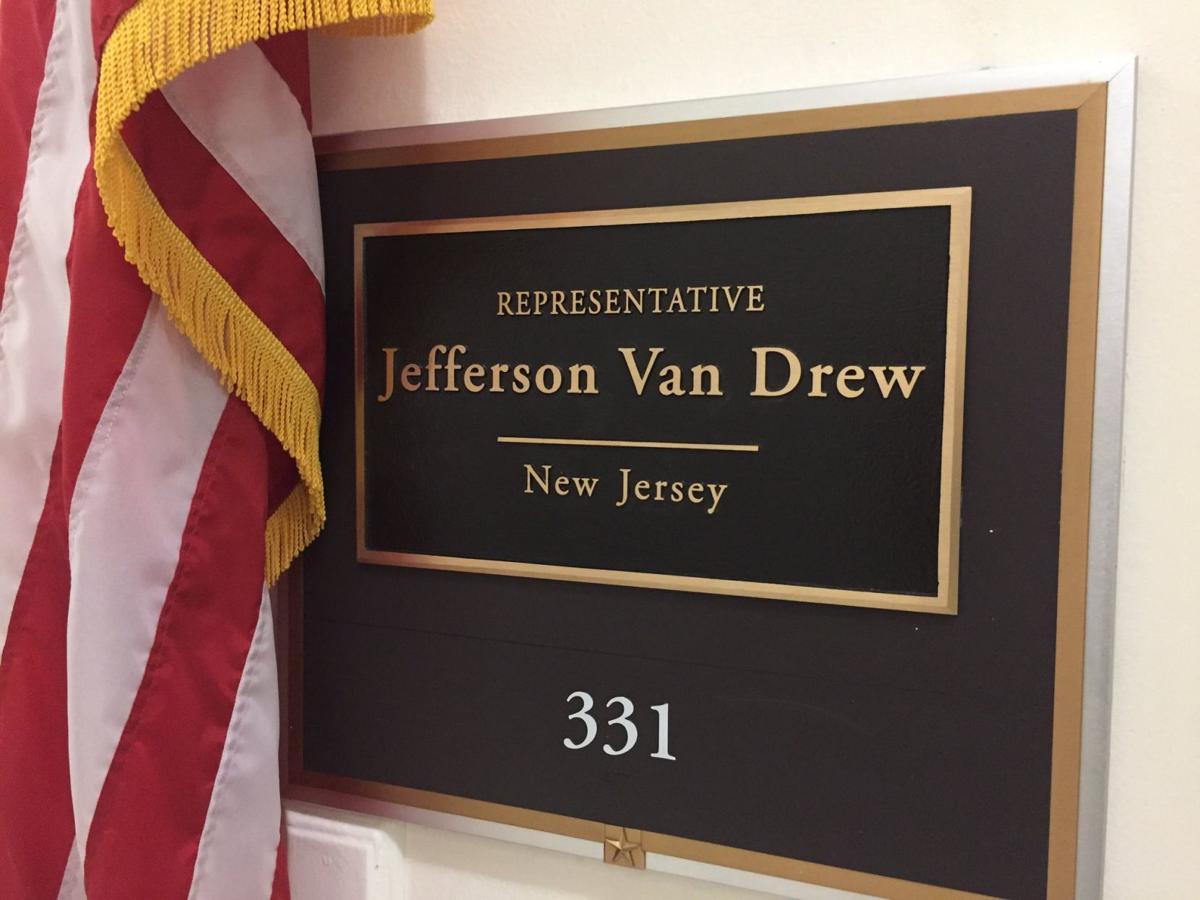 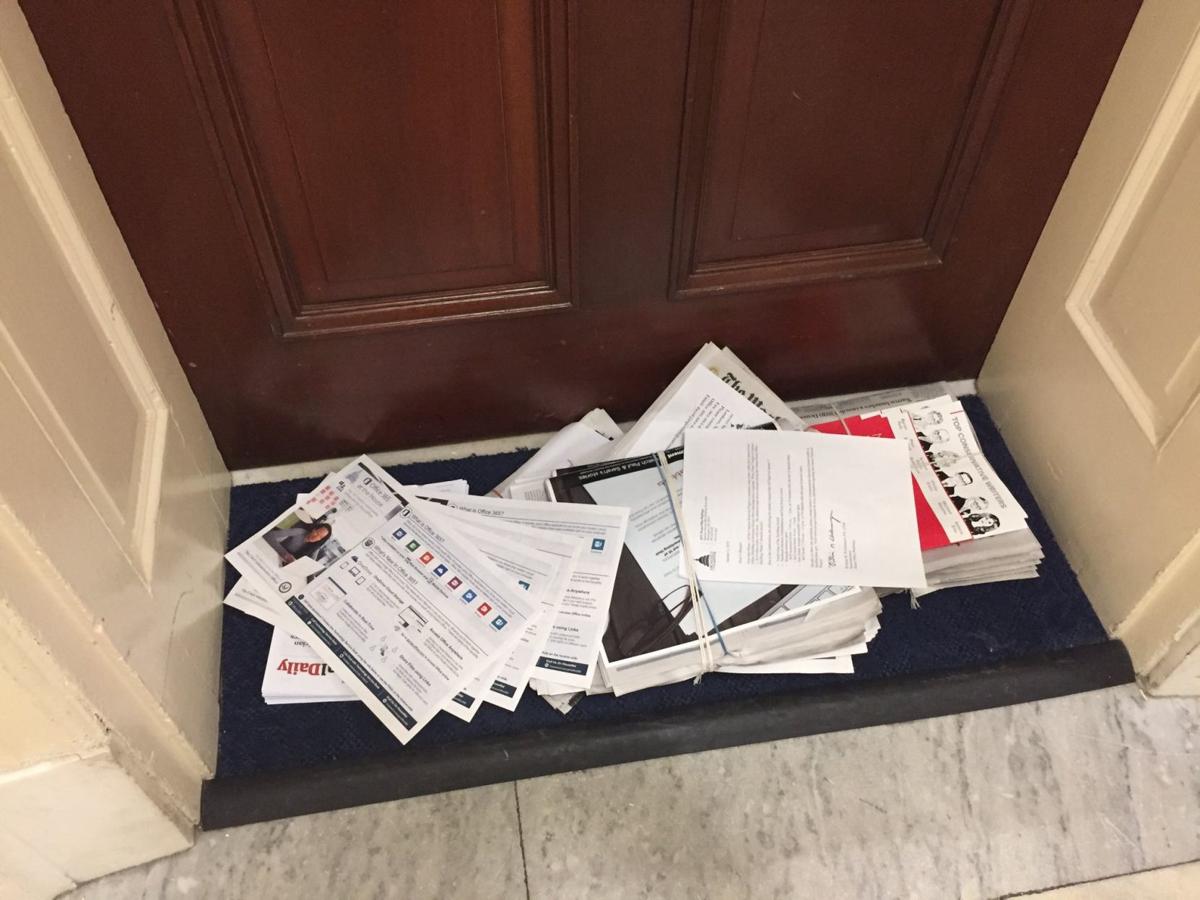 Mail piled up and waiting for U.S. Rep. Jeff Van Drew on his first day in office Thursday. 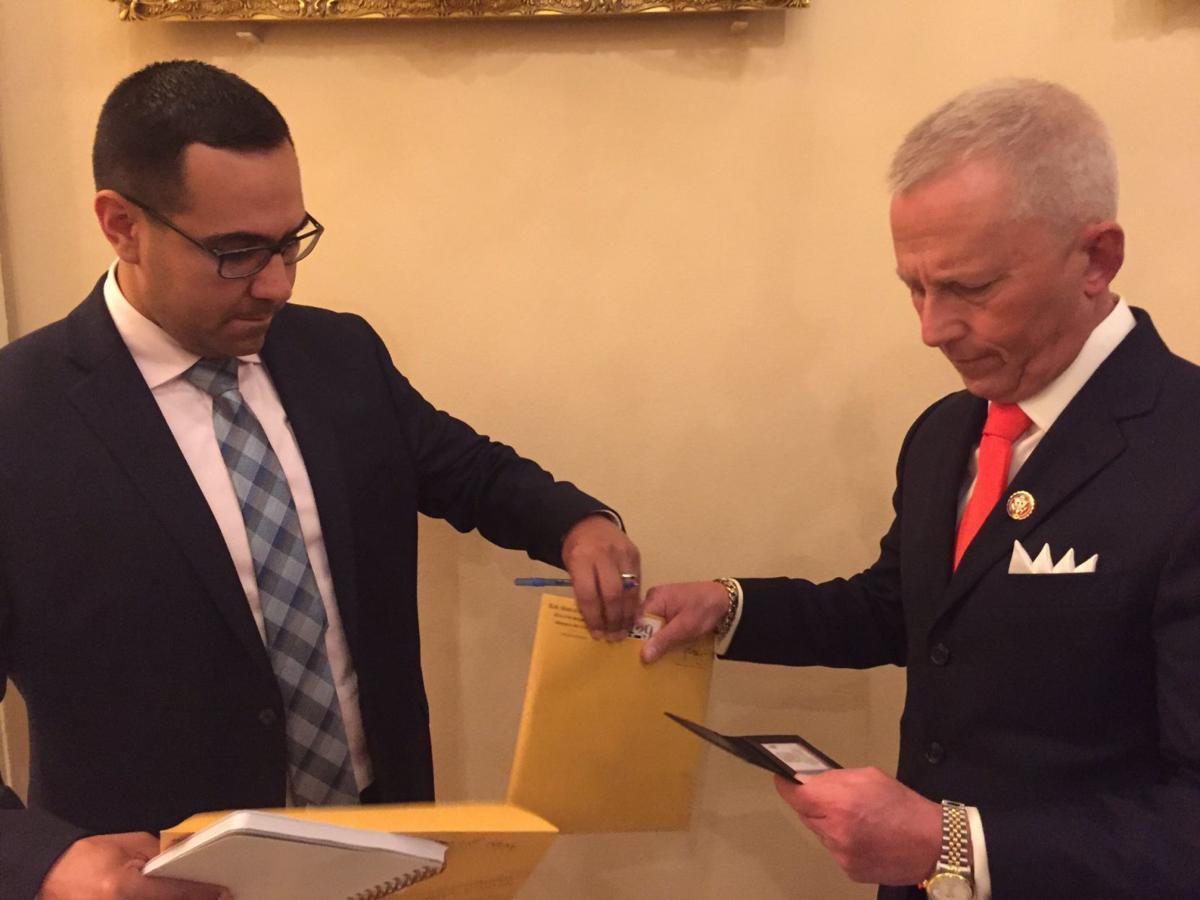 Chief of staff Allison Murphy surprised new U.S. Rep. Jeff Van Drew on Thursday with a name plate for the desk in his Washington office.

Mail piled up and waiting for U.S. Rep. Jeff Van Drew on his first day in office Thursday.

WASHINGTON, D.C. — On his first day in Congress, U.S. Rep. Jeff Van Drew, D-2nd, got the keys to his new office in the Cannon Building, started learning the elaborate tunnel route to the nearby Capitol Building, made a dramatic statement of independence on the House floor and spent an exhausting 14 hours at work.

“It was surreal,” he said Friday, after another voting session in the morning in which the new Democrat-dominated House decided on rules for the 116th Congress.

It was the first time the House was seating a freshman class during a government shutdown. That meant the House worked most of the day, unlike the typical first day when new members have time to go to parties and meet with friends and family there to share the experience.

“I felt bad. I didn’t get to see everybody,” he said of people who came to the office. “I’m so glad we didn’t invite a really big group. We decided we’ll have bigger things later.”

Others who did plan elaborate parties ended up spending their time on the House floor instead, he said. He started his day before 9 a.m. and didn’t finish voting until about 10 p.m.

Late Thursday night, the House passed bills to continue funding most of the unfunded parts of government through the fiscal year, and to fund the Department of Homeland Security — which is where the potential funding for a border wall would come from — for a shorter period, to Feb. 8.

“I voted for them, even though it’s probably fruitless,” he said, noting President Donald Trump has said he won’t sign the funding measures and the Republican-led Senate is unlikely to take them up. “Some are trying to push more to bring everybody together. Everyone needs to give in more, but everybody is digging their heels in.”

Van Drew wants the government reopened, with both sides giving and getting something.

On his first vote Thursday he had opposed Nancy Pelosi’s nomination for House speaker with a simple “no.” But the clerk changed his vote to “present” to meet House rules, which would only allow that or a voice vote for an individual.

Fifteen Democrats did not vote for Pelosi, but she won with the majority of 220 out of 430 votes cast.

What were the biggest surprises of his first day?

And the disorganization, which he acknowledged may be difficult to curb with 435 House members.

“There was a little mayhem,” he said, with not enough seats for everyone there. Many members had their spouses and children with them, including Van Drew, whose wife, daughter and grandson were there.

“There were people standing and kids squeezed in. I think we can do a little better when we have a new freshman class in two years. We could make more room for people, bring in some chairs,” Van Drew said.

There is no assigned seating on the House floor, he said, unlike in New Jersey’s Senate and Assembly.

Van Drew did not have his ceremonial swearing-in photo taken with Pelosi. That wasn’t because of any bad feelings between them, he said. It was because he was spending as much time with visitors as possible.

She congratulated him after the swearing-in, he said.

“I think it’s an important thing in politics, to let others know what you are going to do, to not blindside them,” he said.

Van Drew planned to spend this weekend making what will be an extremely familiar trip home to South Jersey for an event he has long supported, to benefit a program to encourage young people to join the Air Force.

He has sold his dental practice in Pleasantville, where he had continued to practice 20 hours a week as a state senator.

“I will miss it. It was a real family practice,” he said.

Eventually he said he’d like to do some volunteer dental work, but that will have to wait until he has figured out his new routine.

Always a big exerciser, Van Drew is hoping to find time to get to the gym. During a normal week, he would do cardio, weightlifting and body-weight exercises.

On Thursday, the only decoration in his D.C. office was a gift from chief of staff Allison Murphy, who gave him a practical piece: the name plate for his desk. She surprised him with it Thursday.

“We’ll soon have pictures on the walls,” said Murphy as she showed Van Drew where to turn on the lights in a small alcove at the back of the room.

He will bring memorabilia to his D.C. office from his state legislative office. Some of it will also go to his congressional office in Mays Landing, which he took over from retiring Republican Congressman Frank LoBiondo.

“After 16 years in the Legislature, you get some things, and I did,” said Van Drew. “We’ve got to decide which things go where.”

There is a small reception area, with a half wall separating one office behind it. To the right is a tightly packed office for most of the staff, which will include legislative and communications staff; and to the left is Van Drew’s elegant office for work and for meeting constituents.

There has been so much to do with selling his practice, moving out of his old office, finding a place to live in D.C. and getting his new Capitol Hill office staffed and ready, the last few weeks have been a bit chaotic.

“The easiest thing of all has been the Mays Landing office,” he said. Two of LoBiondo’s staff members have agreed to stay on to make the transition easier on constituents.

Both Van Drew and LoBiondo have said it’s a good example of how the two parties can work together for the good of the district.

A look back at U.S. Rep. Jeff Van Drew's career

U.S. Rep. Jeff Van Drew's political career has taken him from Dennis Township dentist to state legislator known to vote against his party to t…

During his first vote on the House floor Thursday, U.S. Rep. Jeff Van Drew, D-2nd, stood out among the 66 other freshmen Democrats who took office.

ATLANTIC CITY — To help U.S. Coast Guard members working without pay during the government shutdown, The Iron Room will offer free dinners to …

WASHINGTON (AP) — With no breakthrough in sight, President Donald Trump will argue his case to the nation Tuesday night that a "crisis" at the…

It’s a familiar story: Residents, sick of the cost of living, pick up and flee New Jersey.

The Cape May County Division of Social Services is reaching out to Coast Guard members with information on financial assistance programs, as t…

The U.S. Department of Agriculture will reopen some Farm Service Agency locations temporarily to perform specific services for farmers and ran…

WASHINGTON — U.S. Rep. Jeff Van Drew gave his first speech on the floor of the House of Representatives on Wednesday, calling on his peers to …

WASHINGTON — U.S. Rep. Jeff Van Drew, D-2nd, has been appointed to the House Committee on Agriculture, as he expected, he said Friday.

Deal to avoid shutdown may include emergency declaration for wall