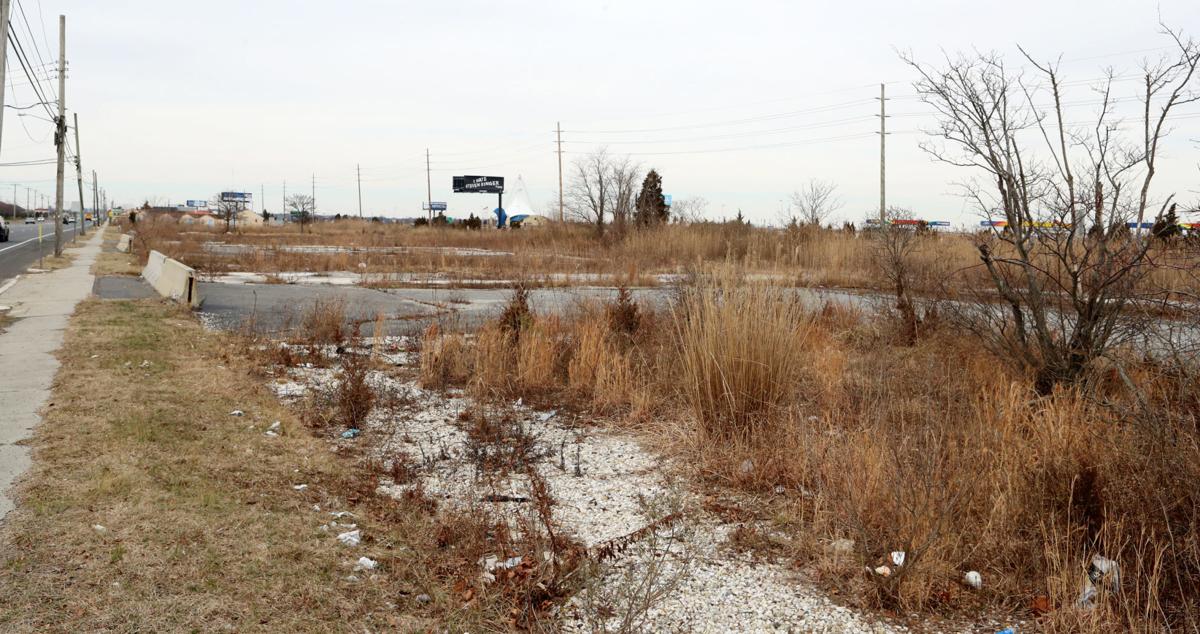 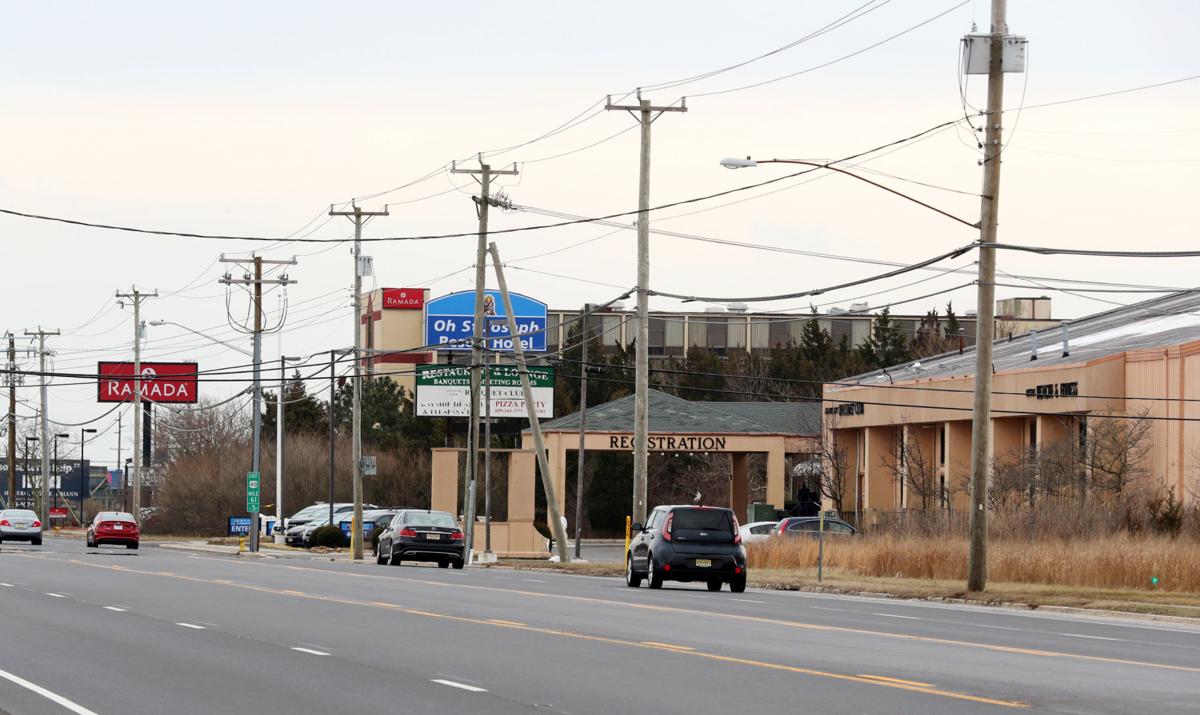 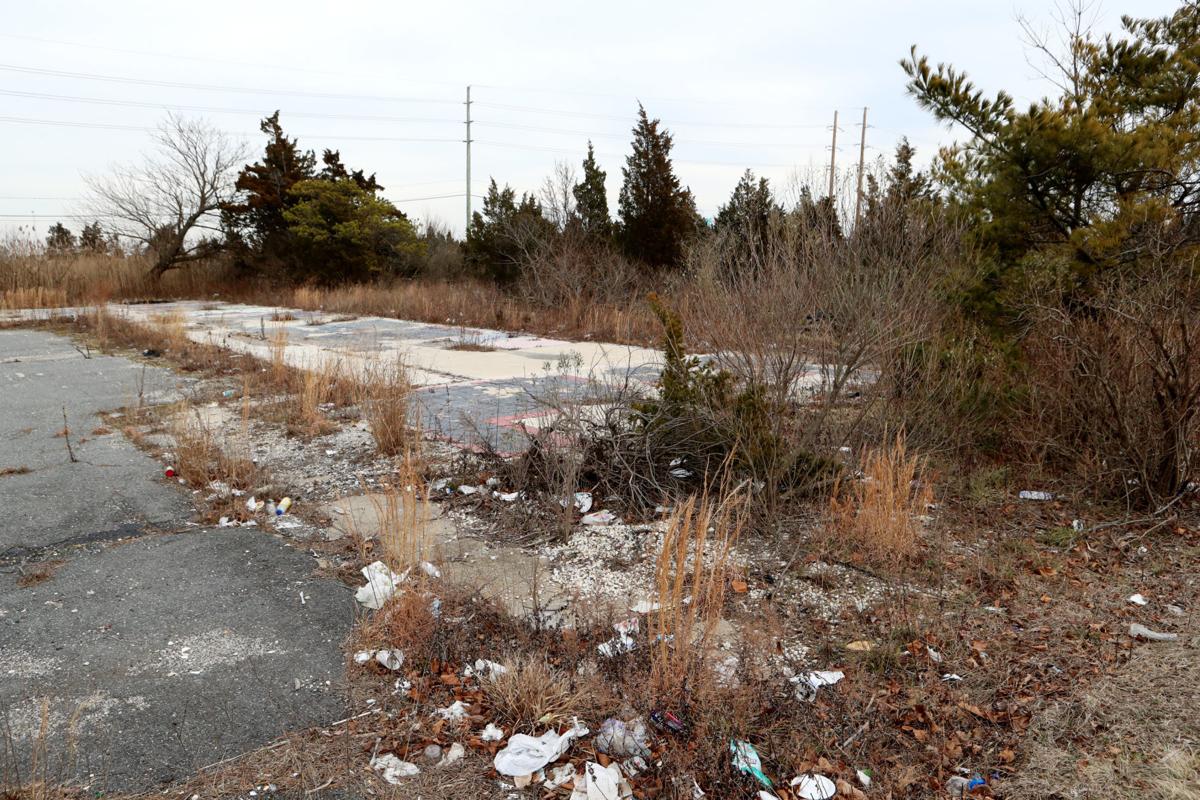 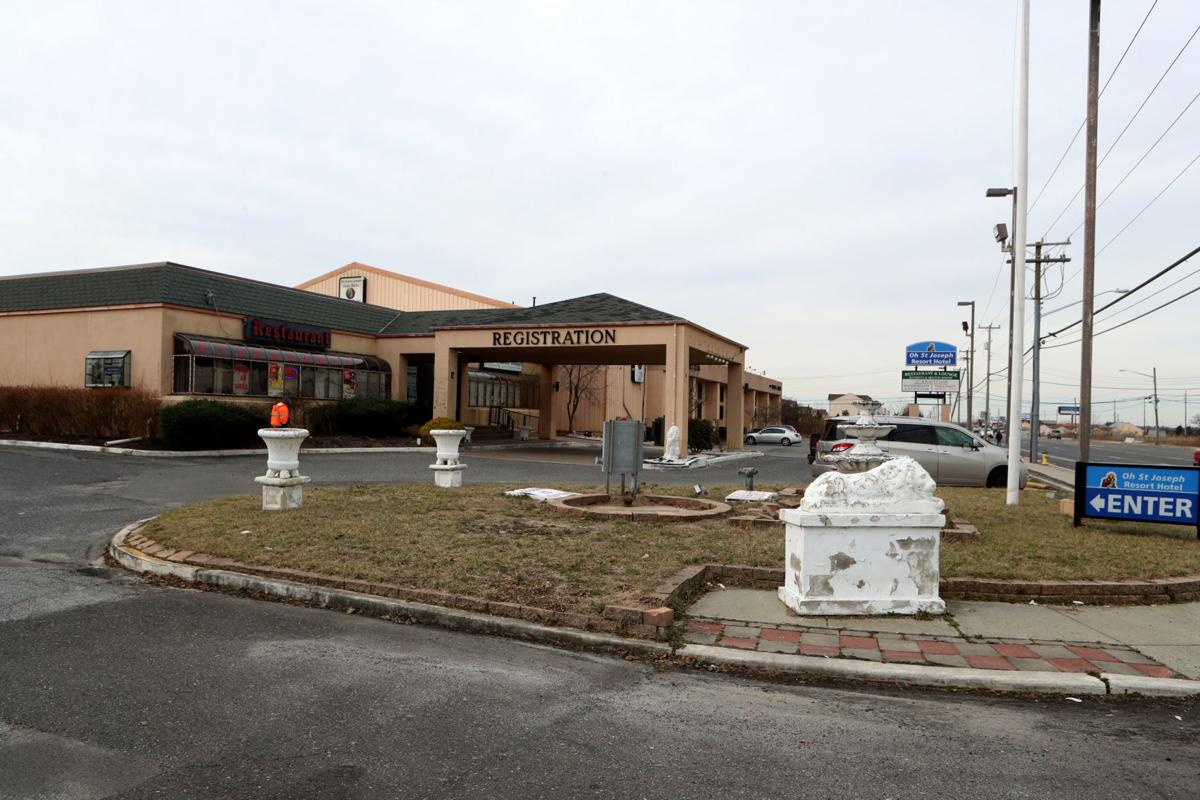 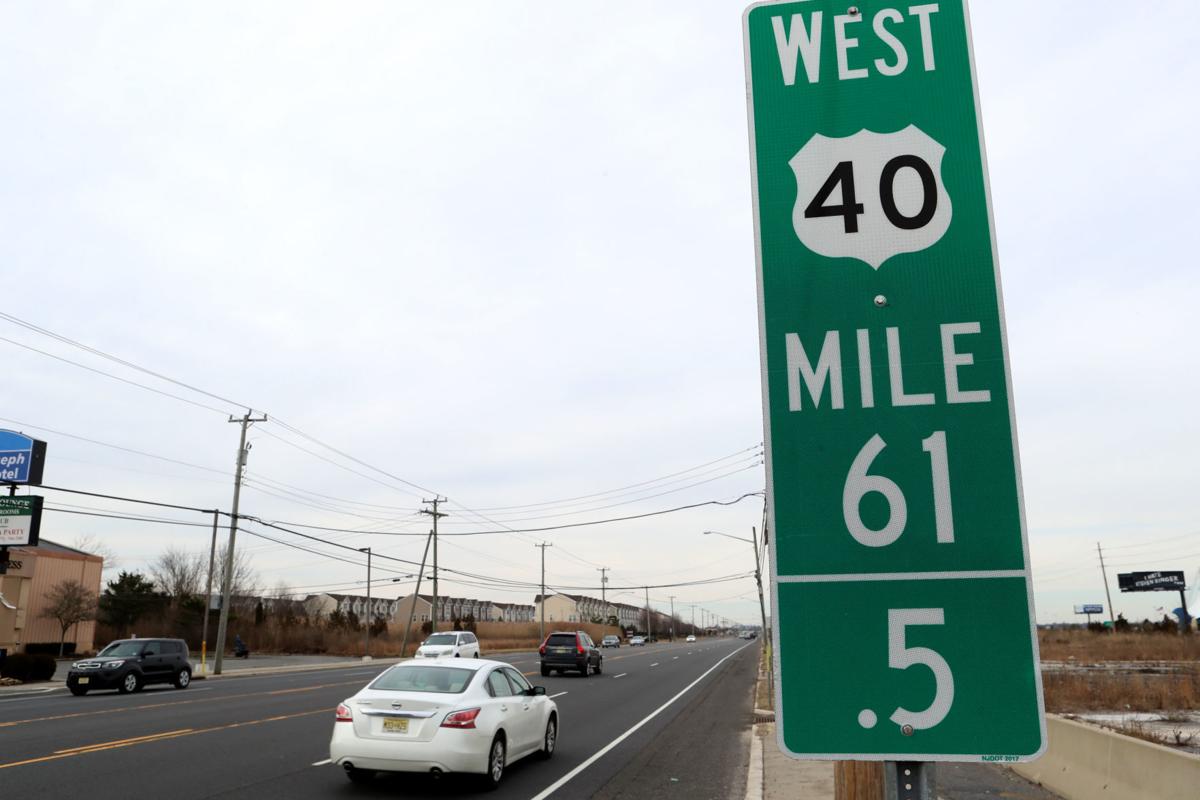 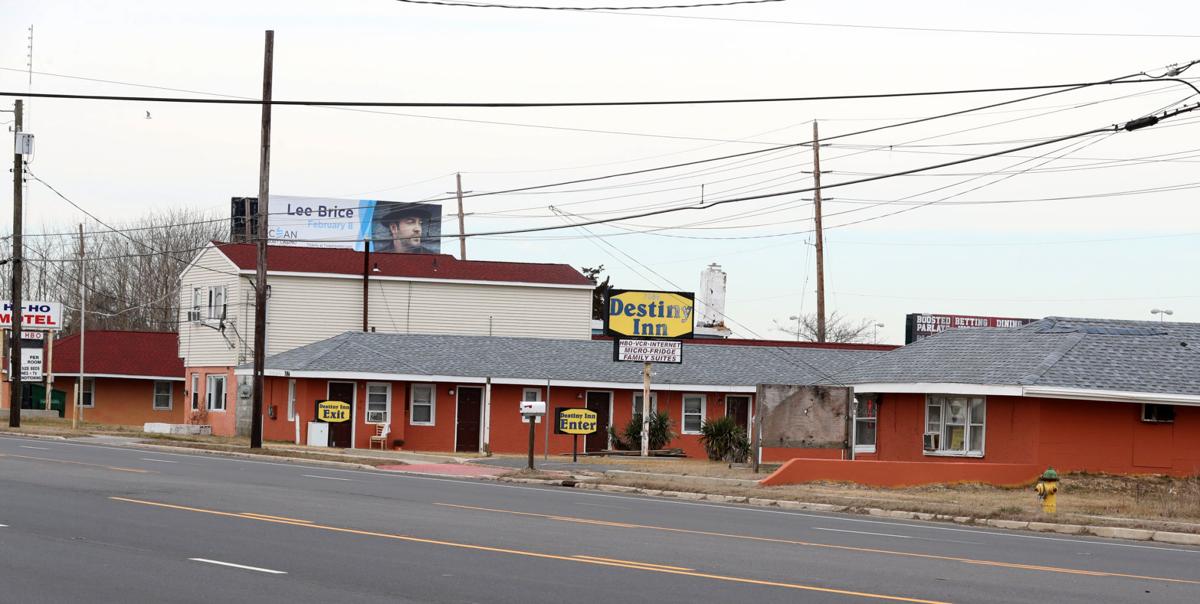 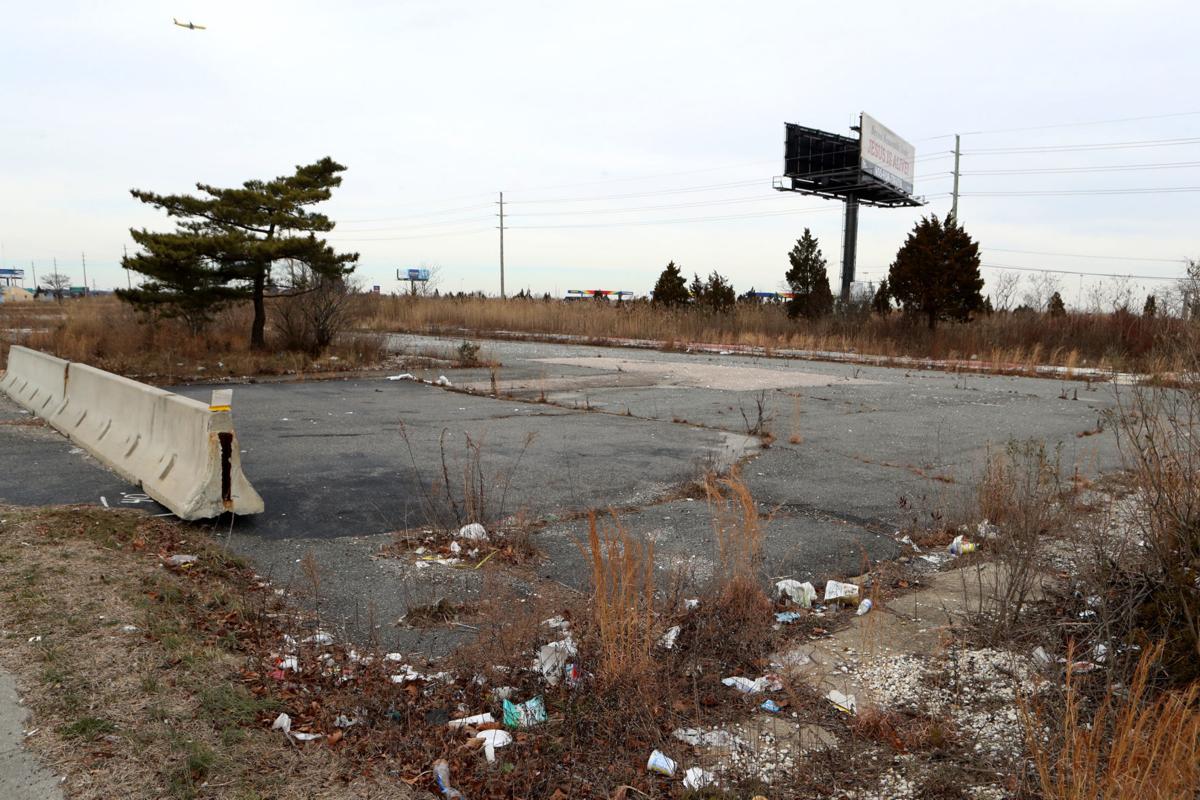 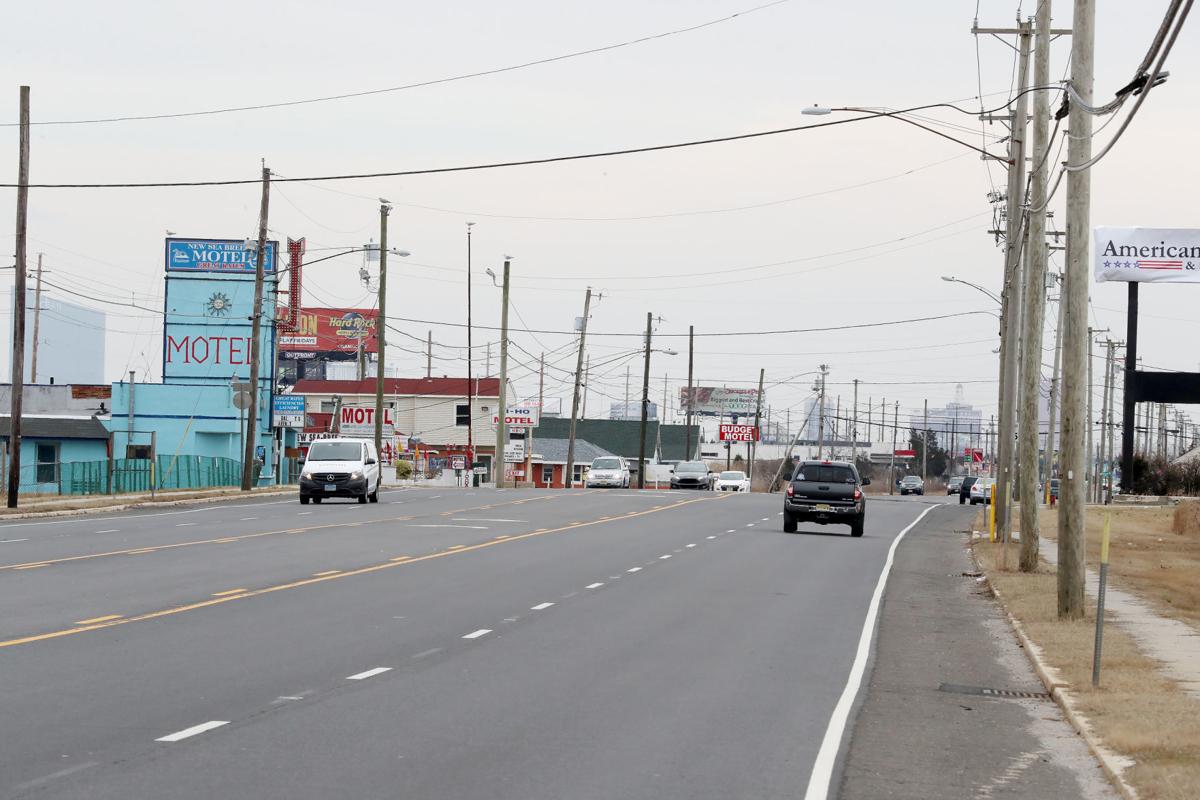 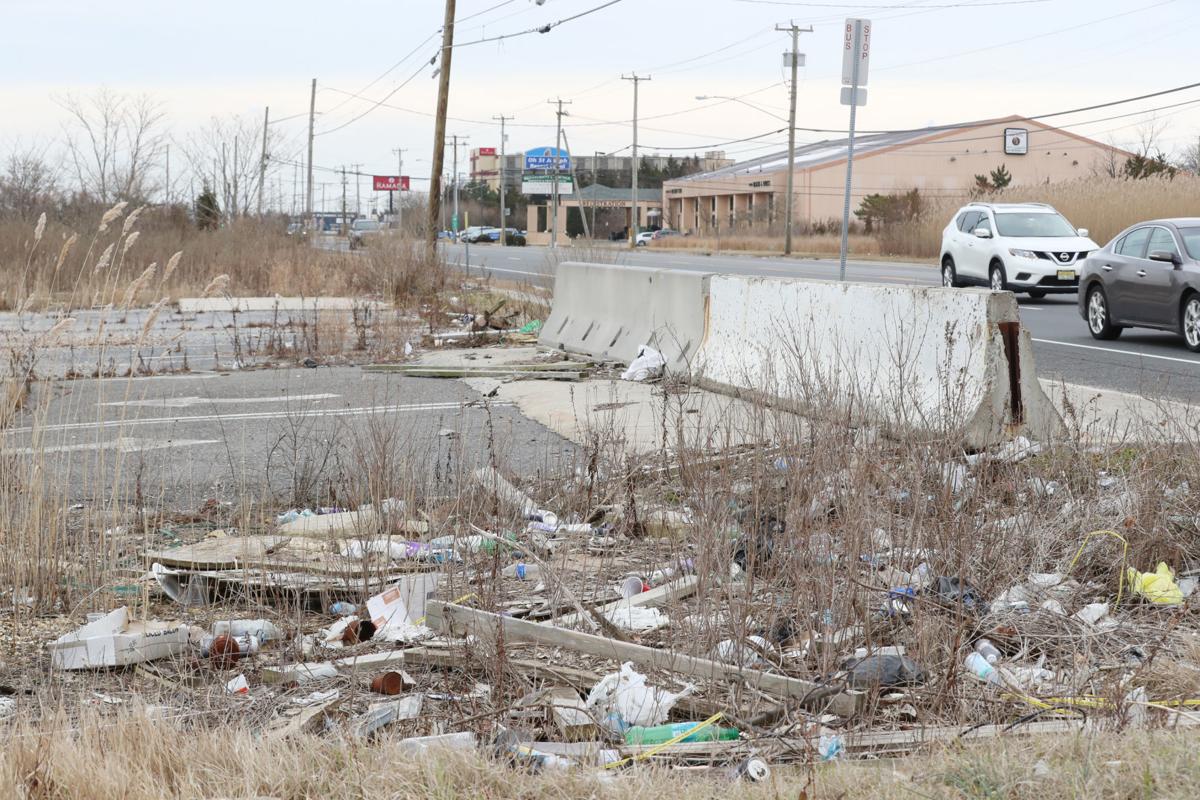 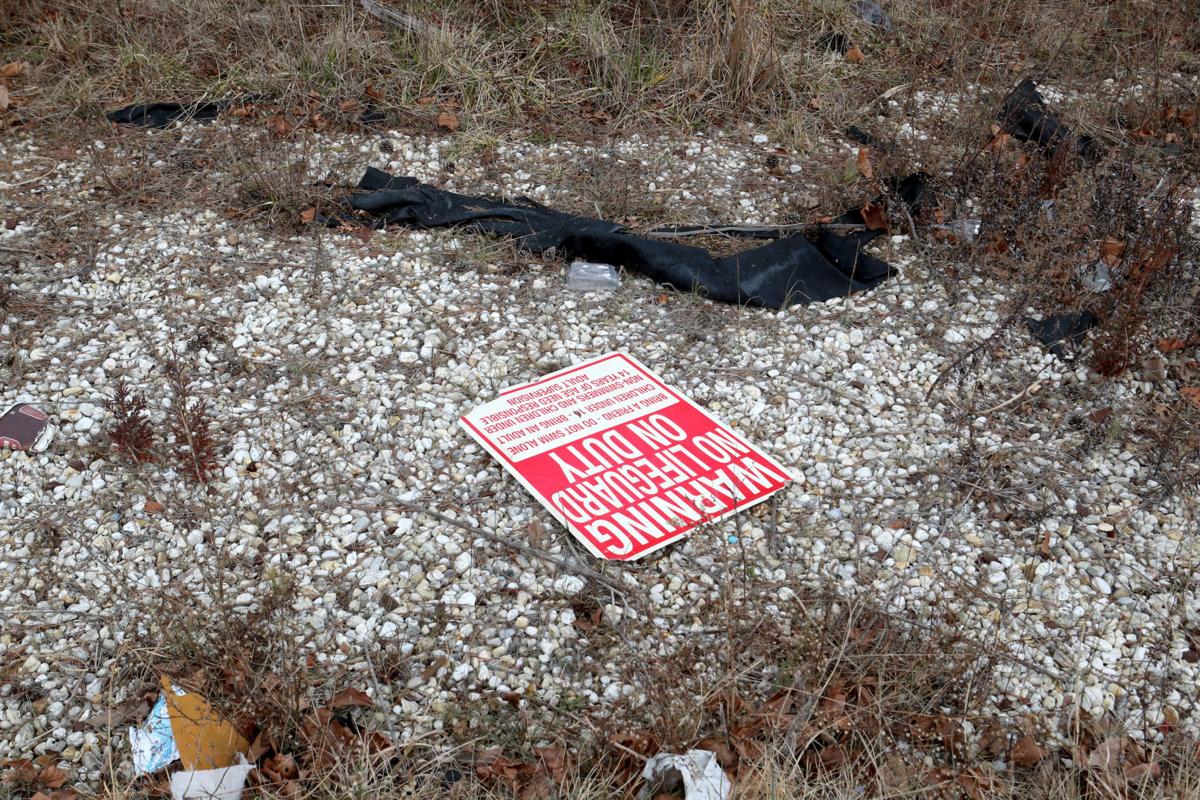 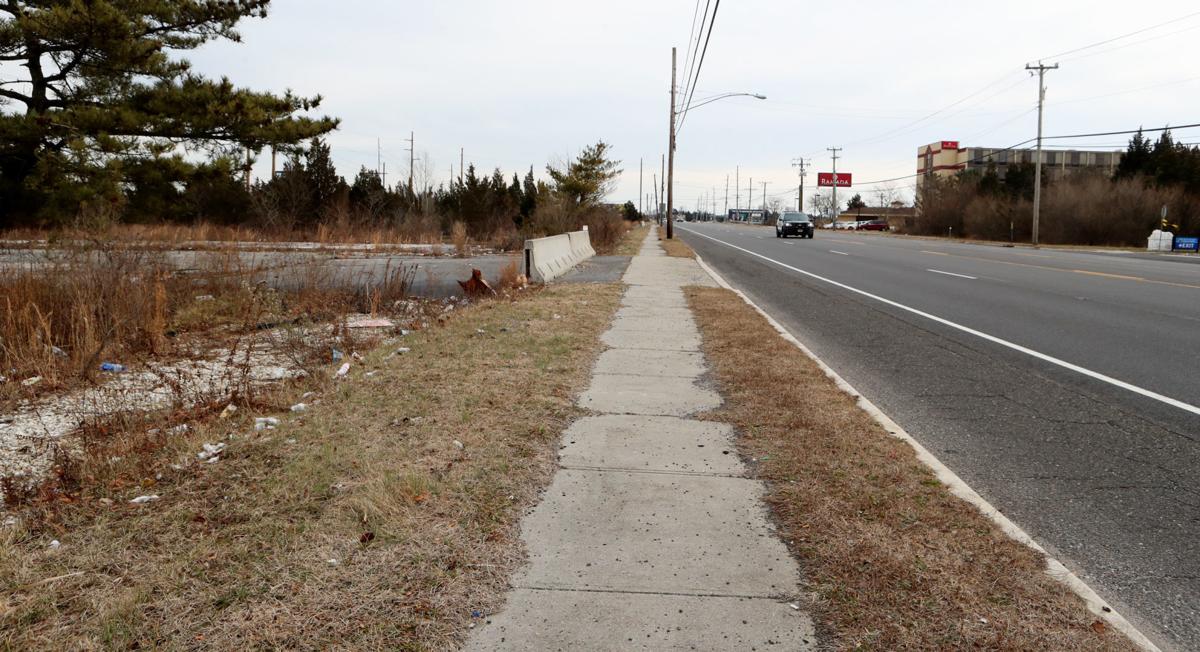 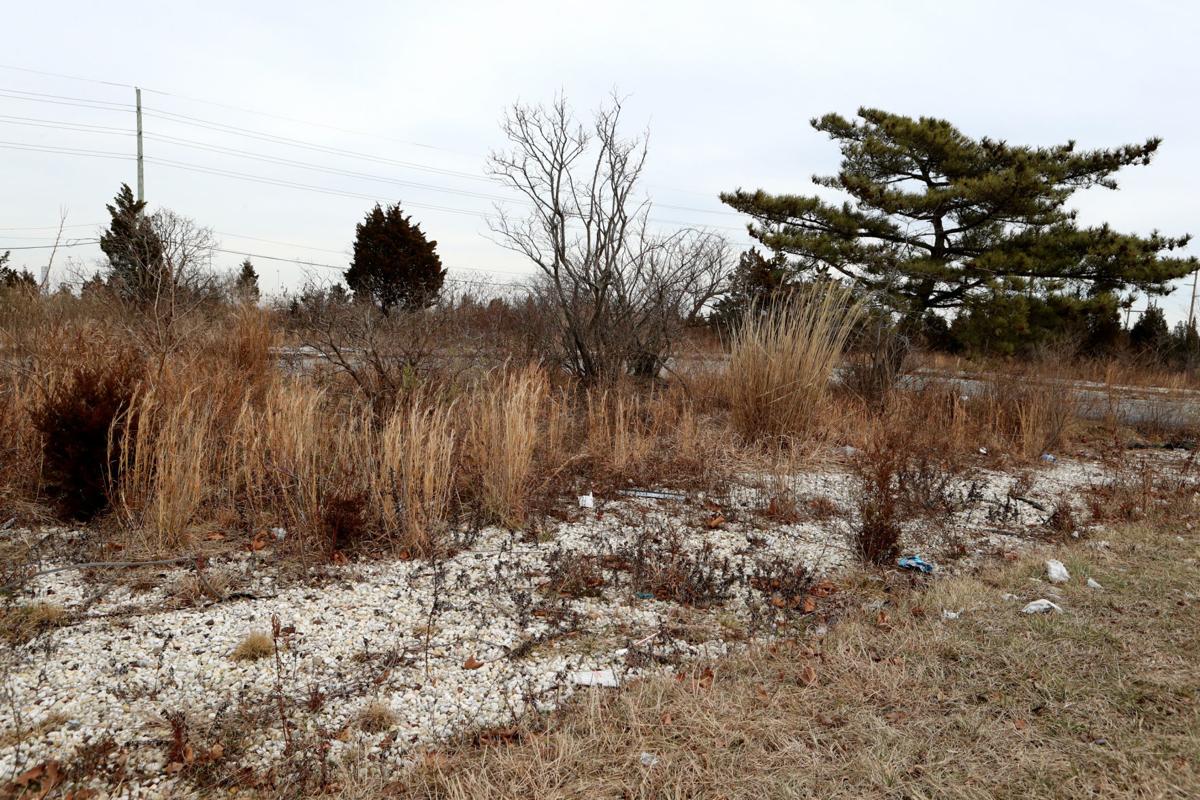 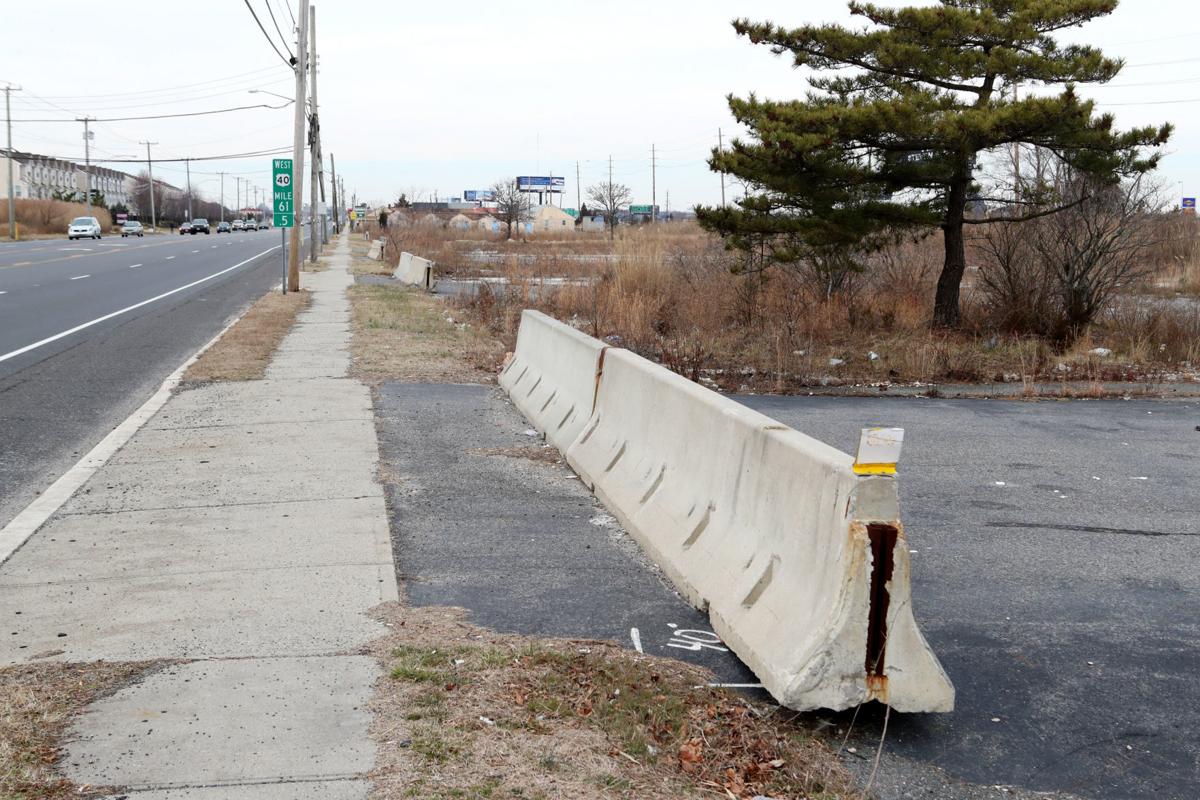 Blight welcomes visitors to Atlantic City in the form of run-down motels along Route 322 leading into the resort.

Staff at the Comfort Inn on the Black Horse Pike became accustomed to seeing guests sell narcotics in the parking lot.

The police would be called to the now-shuttered hotel, said property owner Dr. Ira Trocki, and the issue resolved. But the seedy motels across the highway from his inn always brought problems back.

“West Atlantic City is gorgeous. It’s on the bay. But all the little motels on the opposite side have had nothing but problems over the years and hold Atlantic City back,” said Trocki, a plastic surgeon who is looking to sell the property to a developer. The hotel closed in 2016 after water pipes broke during a frigid winter.

It’s not part of Atlantic City, but the 298-acre stretch of the Black Horse Pike in Egg Harbor Township is Atlantic City’s problem. It’s dotted with crumbling motels, mostly built in the 1950s, that have provided havens for drug use, prostitution and other illegal activities.

"West Atlantic City is gorgeous. It's on the bay. But all the little motels on the opposite side have had nothing but problems over the years and hold Atlantic City back." - Dr. Ira Trocki

Driving into the city, these eyesores set the stage for glistening casinos and a world-famous Boardwalk.

Now, the township is approaching the decades-long blight that has plagued the resort’s entrance from a different angle, but progress is still slow. And with Stockton University and South Jersey Gas sitting at the door to Atlantic City, there’s a renewed push to polish up the pike.

All four properties have had a total of 56 claims over the past 10 years, equal to $3.8 million. The state is reviewing the application before it gets sent to FEMA. By the fall, the federal government will either approve or deny the proposal.

Only recently did the grants become available to towns.

“It’s been very, very slow getting funding,” said Peter Miller, Egg Harbor Township’s business administrator. “It was only in the last couple of years FEMA made this type of grant available for municipalities.” 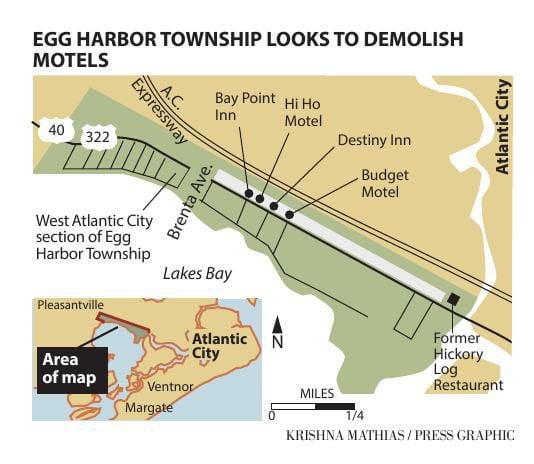 But since then, progress has stalled. Limited funding from the CRDA for motel demolitions, a lack of interested developers and a flood problem have dampened headway.

“The concept is still there, but there are no redevelopers knocking on the doors,” said former Mayor James “Sonny” McCullough. He blames the economic downturn spurred by the 2008 recession that he says has persisted in and around Atlantic City. Frequent flooding on the pike doesn’t help matters.

“We had conversations with two or three potential developers in 2006 and 2007, but after the recession, they never came back,” Miller said. “They disappeared.”

Even getting West Atlantic City designated an area in need of redevelopment took years after a back-and-forth with the state Department of Environmental Protection over whether the peninsula is considered an island or part of the mainland, he said.

McCullough has seen West Atlantic City through some of its worst times.

In the late 1980s, he said, families were housed in some of the motels, placing them in an unsavory environment. Break-ins in nearby homes were common, he said.

“The concept is still there, but there are no redevelopers knocking on the doors.” Former EHT Mayor James "Sonny" McCullough

A handful of motels were demolished in 2015 using $3 million from the Casino Reinvestment Development Authority, including one dubbed the “motel from hell” where four women were found murdered nearly 13 years ago. The killings made national headlines.

The CRDA and the city entered into an agreement last year to demolish the Bayview Inn in the resort, where a 4-foot alligator was found in a pool during a 2017 drug raid.

But the demolition was postponed for months after a company, Deep Blue Development, expressed interest in redeveloping the property. That never happened, and the motel has sat vacant and falling apart.

Plans for razing it are on again. Tear-down costs were initially estimated at $230,000, said CRDA Planning Director Lance Landgraf. A chain-link fence surrounds the dilapidated, boarded-up building to keep out trespassers.

“The first thing you see when you come into the community shouldn’t be a dilapidated building,” Landgraf said. “It’s one of the main access points to the community. As soon as you come off the expressway Exit 2, that’s what you see.”

The block of Tennessee Avenue between the Boardwalk and Pacific Avenue has seen a recent flurry of investment and redevelopment, resulting in …

The story of blight in Atlantic City: Will it ever end?

ATLANTIC CITY — When the TV news show “60 Minutes” came to town on the 20th anniversary of legalized gambling here, Atlantic City was booming …

Art is a tool in the fight against blight. How can A.C. see more of it?

In the aftermath of Hurricane Sandy, Jenn Hampton was walking past boarded up buildings on Asbury Park’s boardwalk when she had an idea.

Atlantic City has had difficulty in shielding its visitors from unpleasant urban realities such as poverty, crime and drug use, which is often…

ATLANTIC CITY — Rather than sit back and wait for those in need to come to them, a group of vested community stakeholders is taking its effort…

Atlantic City fighting blight one building at a time

Two vacant motels on Route 40 are hitting the auction block

In the market for a motel? You’re in luck.

ATLANTIC CITY — Catherine “Kitty” Gartrell is a former professional singer, who used her powerful voice to entertain in casinos and major citi…

The Inn of the Dove in Egg Harbor Township is set to be auctioned off on Wednesday.

EGG HARBOR TOWNSHIP — Northfield developer Bandi Property Group made a $650,000 offer on the vacant Inn of the Dove that was accepted Wednesda…

Another $1 million in property demolition coming to Atlantic City