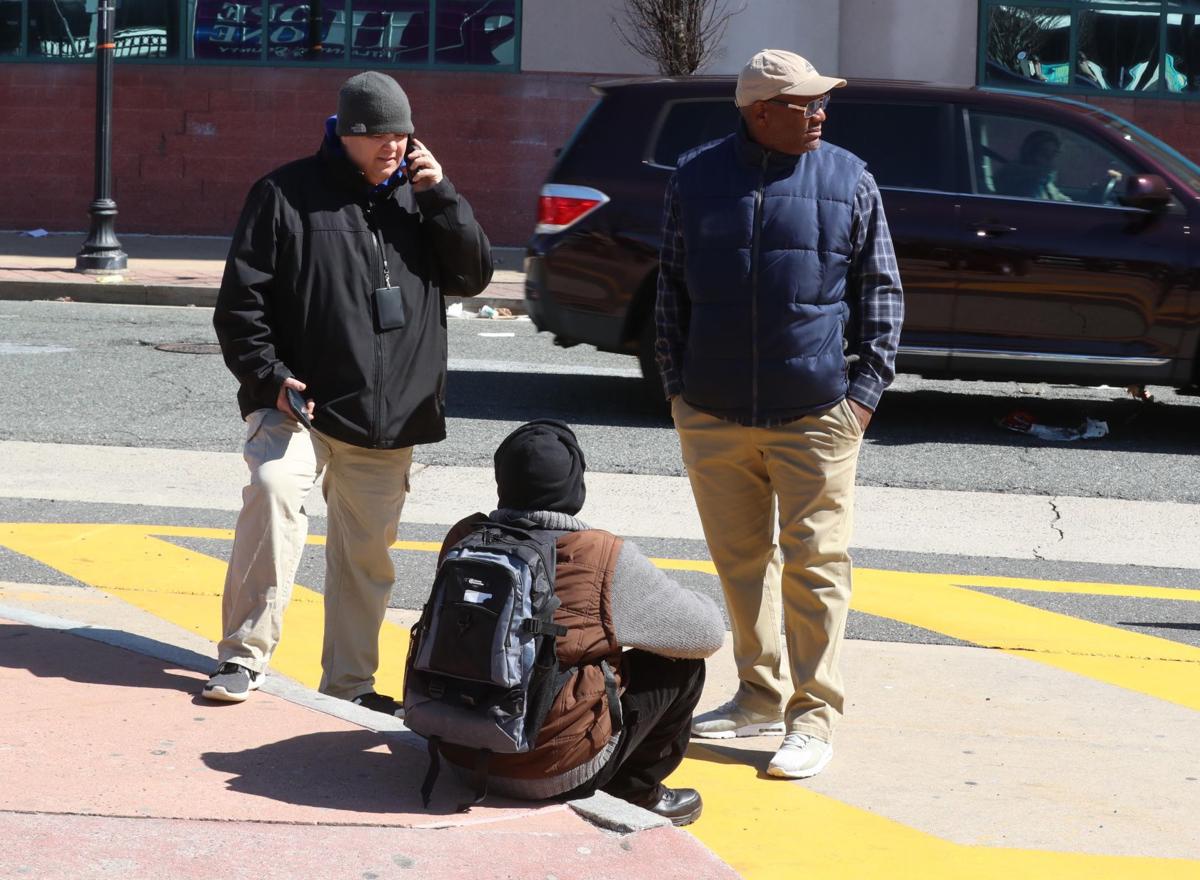 Scott Gras, left, from the Atlantic County Sheriff’s Office, and Doug Martin, right, a recovery specialist with AtlantiCare, attempt to help a young man get treatment Tuesday in Atlantic City.

City Council in the fall passed an ordinance that could transform the needle exchange at 32 S. Tennessee Ave. into a mobile unit so it would not be based in the Tourism District. 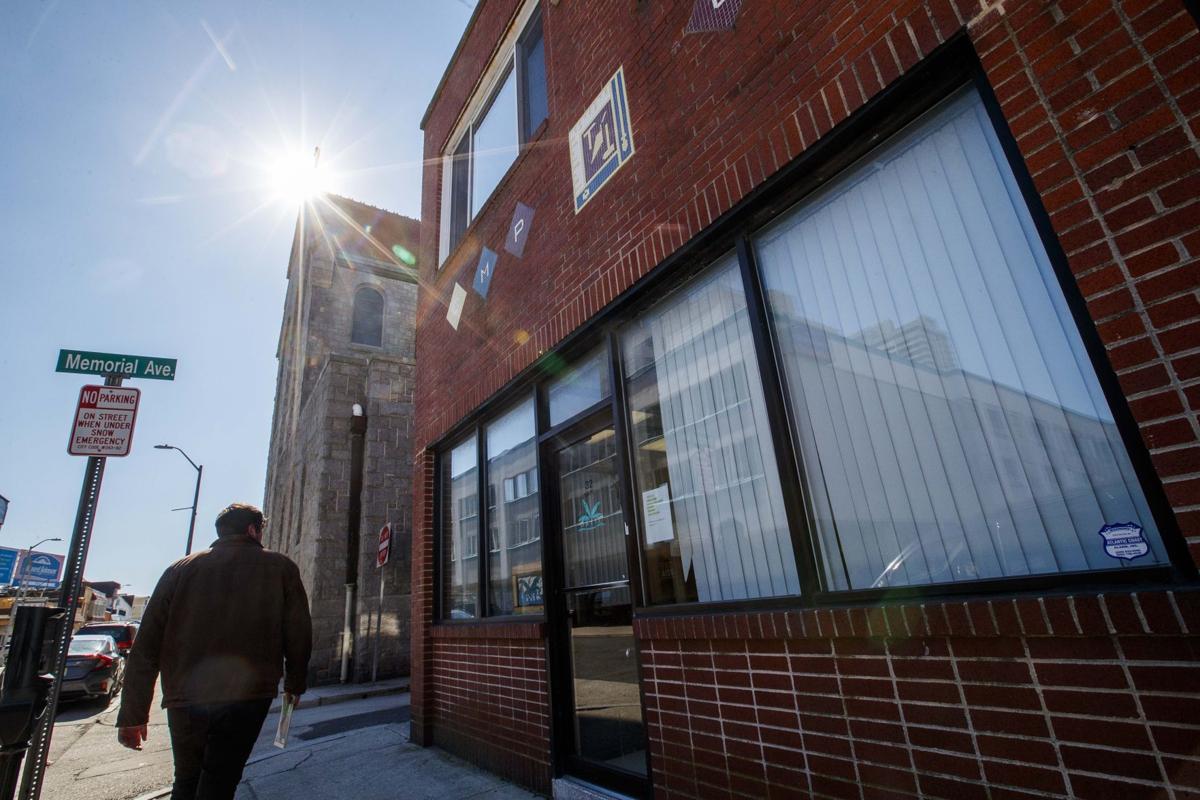 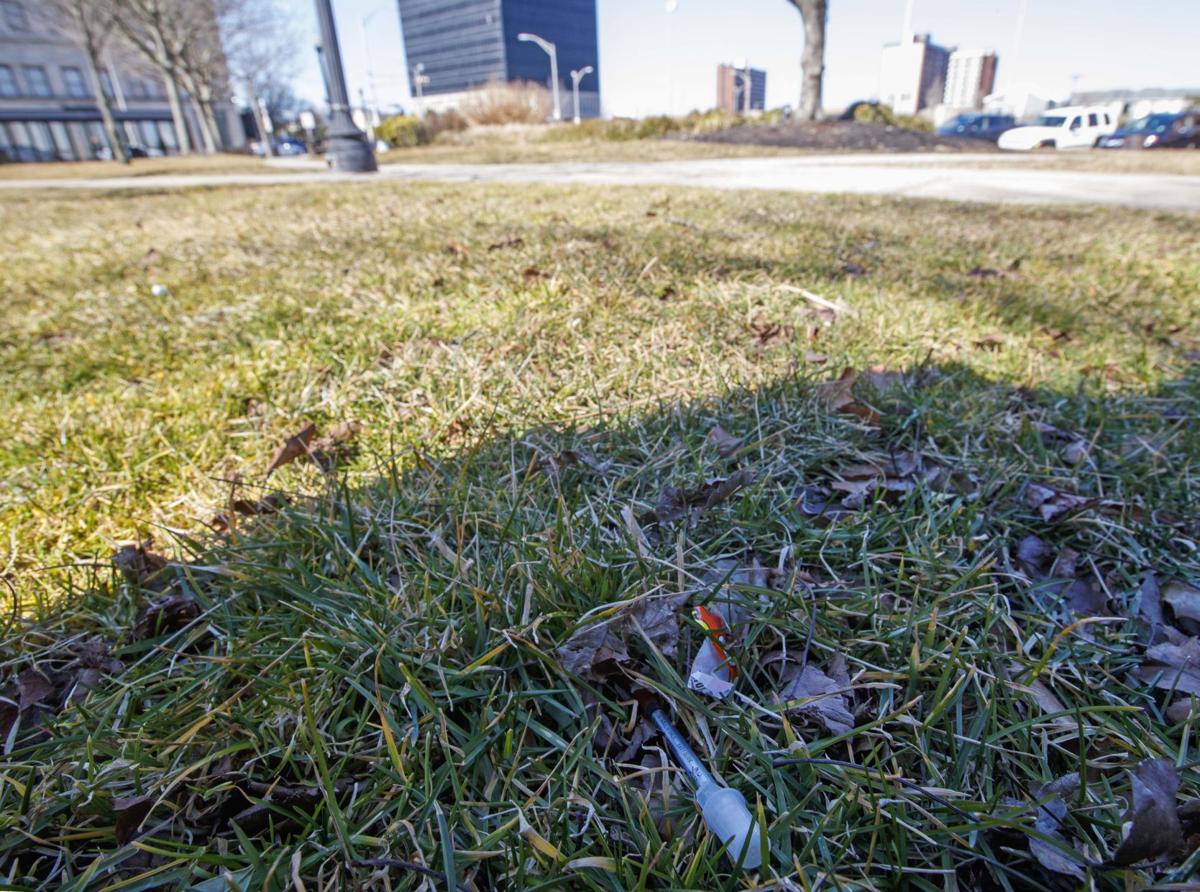 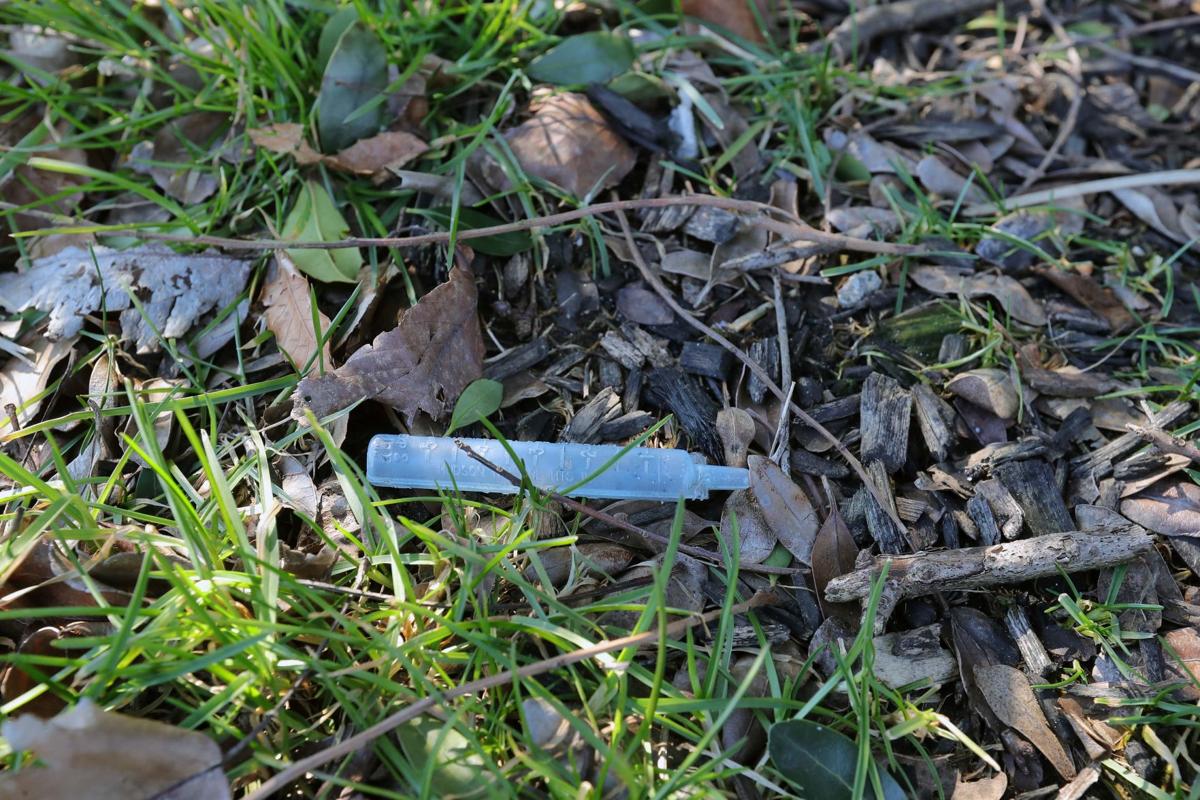 A needle in the park on South Carolina Avenue. 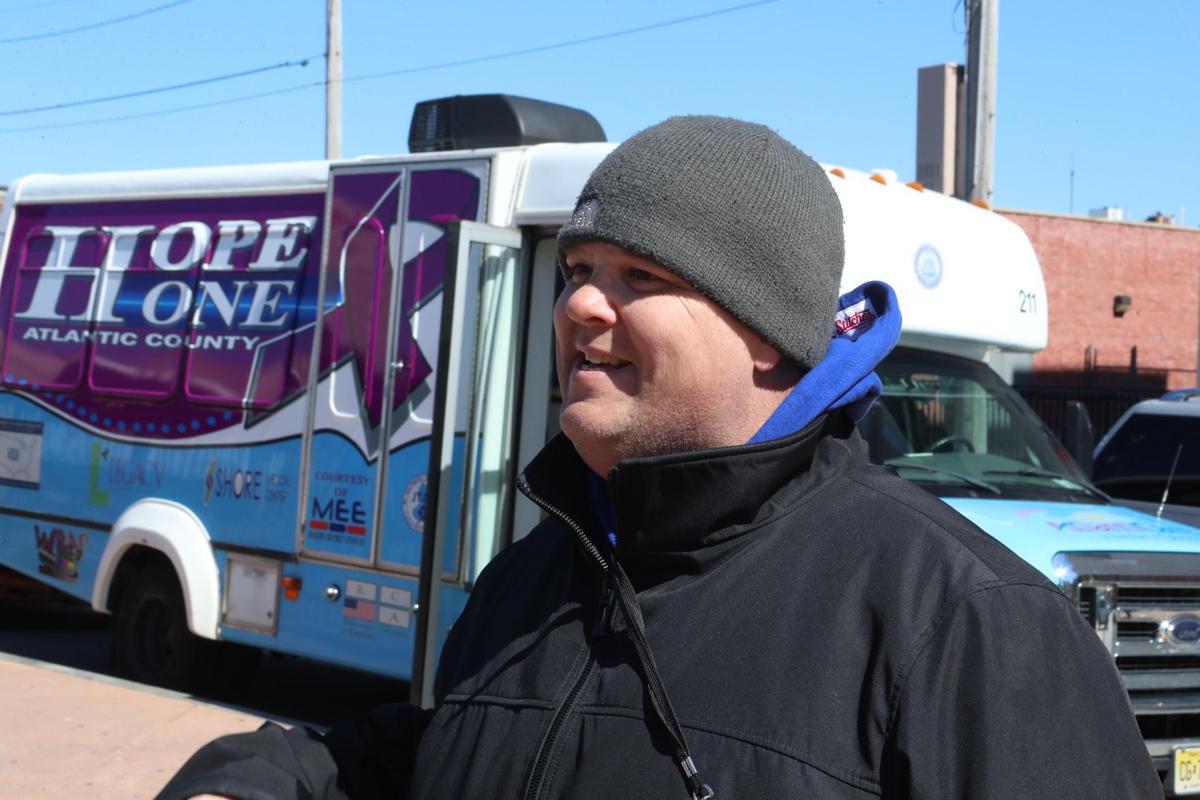 Scott Gras, coordinator of the Hope One mobile recovery unit, recently celebrated six years free from heroin. ‘If I got one person into treatment today,’ Gras said, ‘I did my job.’ 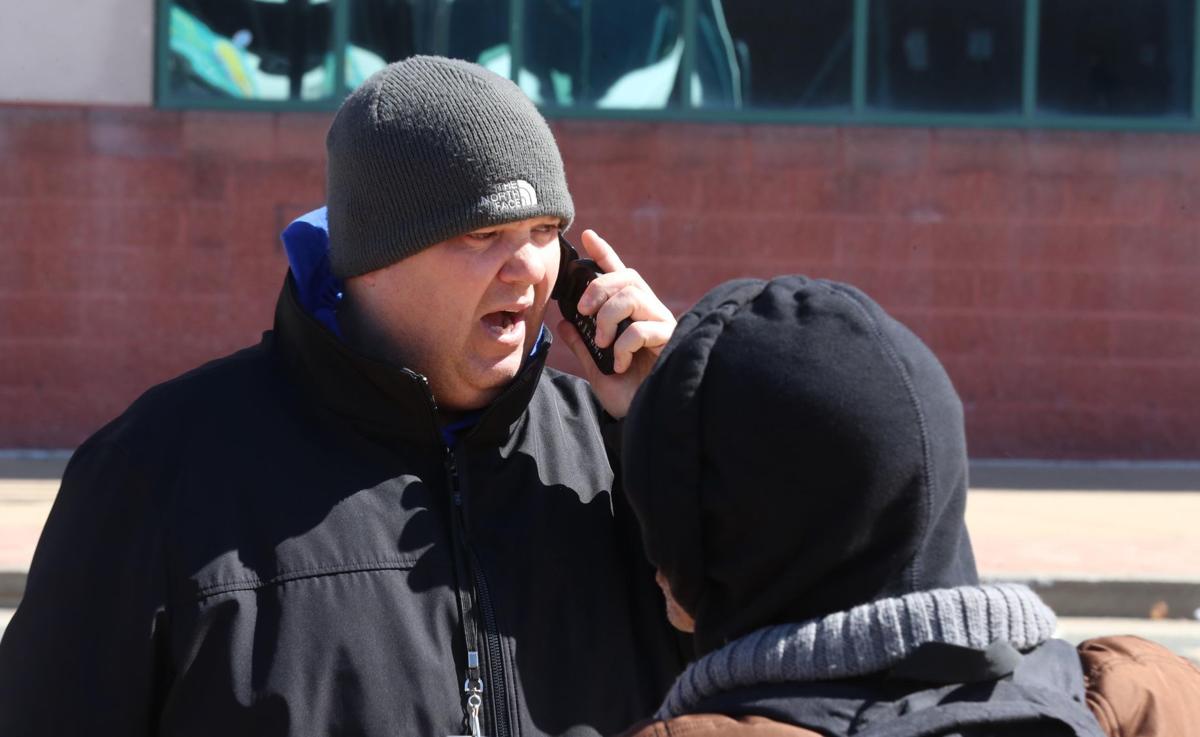 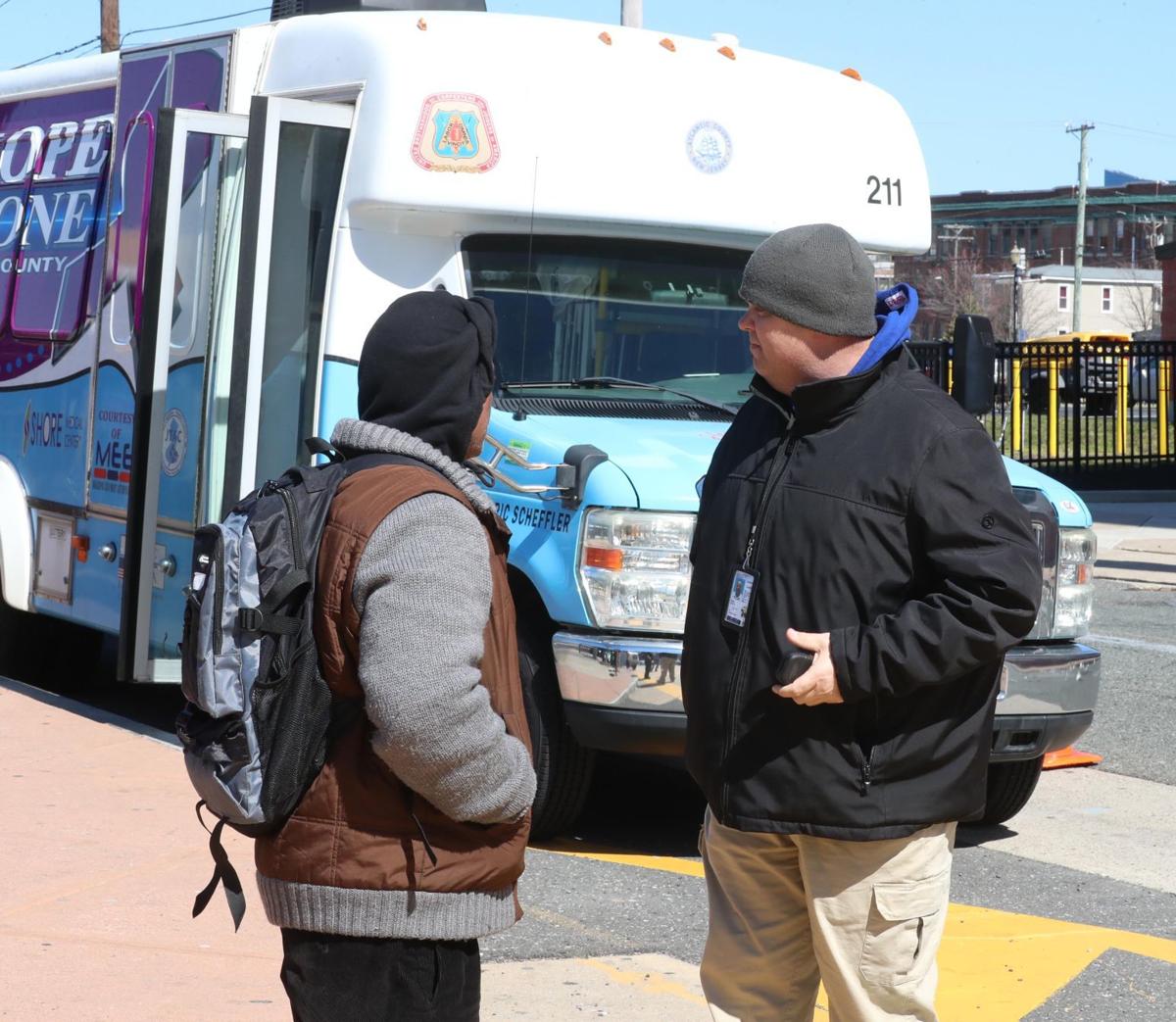 Scott Gras, left, from the Atlantic County Sheriff’s Office, and Doug Martin, right, a recovery specialist with AtlantiCare, attempt to help a young man get treatment Tuesday in Atlantic City.

City Council in the fall passed an ordinance that could transform the needle exchange at 32 S. Tennessee Ave. into a mobile unit so it would not be based in the Tourism District.

A needle in the park on South Carolina Avenue.

Scott Gras, coordinator of the Hope One mobile recovery unit, recently celebrated six years free from heroin. ‘If I got one person into treatment today,’ Gras said, ‘I did my job.’

Martin, born in Atlantic City in 1967, was addicted to heroin, something he has come to attribute to childhood traumas.

Martin’s story is like many others; he was treatment-resistant and had his share of false starts. He had four years clean in 2007 before relapsing. But faith in God and seeing his aunt suffer a stroke — after she took him in when he needed it — pushed him through. In October, Martin joined AtlantiCare as a recovery specialist.

Atlantic City, a seaside resort with alarming poverty rates and a growing trend of substance abuse, is in the eye of the storm in South Jersey. Police seized more than double the amount of heroin in 2018 than the previous year. Officers administered naloxone, the emergency overdose reversal drug, 20 times last year. And a higher percentage of Atlantic County residents entered treatment for narcotics abuse in 2017 than in neighboring counties, state data show.

“(Atlantic City) kind of jumped off the chart at us,” said Sean Hopkins, the NJHA report’s lead researcher.

The city is reliant on police removing drugs from the streets, and specialists like Martin working in concert to reach those who are addicted.

Several factors contribute to the city’s gravitational pull on the addicted, including the ready availability of both heroin and help.

“It’s evolving. … It’s changing,” Martin said. “Now, you have other people coming from rural areas and stuff into Atlantic City. … The reason why they come into Atlantic City is because it’s easier for them to get the drugs.

On one trip to the bus terminal on Atlantic Avenue in March, a young man from Mays Landing — who spent most of 2018 in long-term treatment for heroin addiction — was waiting for the van when it pulled up, his guitar on his back. The van’s coordinator knew him; he had helped him get into treatment last year. He was using again, and a fellow user had to give him CPR that morning, urging him afterward to see the specialists with Hope One. They called around and found him a bed at a detox center in Williamstown. They found a ride for him the next morning, and he left with toiletries, snacks and socks.

The South Jersey AIDS Alliance needle exchange in the city also draws heroin users from the surrounding region, which adds “a further strain to both public health and law-enforcement functions in the city,” said Jim Johnson, the special counsel tasked with making recommendations for the city’s return to self-governance. Ninety-eight percent of needles given out at the exchange last year were returned, the highest rate of any in the state.

City Council in the fall passed an ordinance that could make the needle exchange a mobile unit to get it out of the city’s Tourism District. The alliance’s executive director at the time said moving the exchange was OK, but that a van would be an access issue for regulars.

At AtlantiCare Regional Medical Center, staffers for a number of grant-funded services are tasked solely with keeping in touch with addicted residents and helping them get into treatment if they desire.

“It’s a difficult disease, and so one treatment or one visit or one residential (visit) isn’t necessarily sufficient,” said Julie Drew, director of behavioral health at AtlantiCare. “So we need to continue to provide support so that we keep people in the recovery zone.”

Last year, according to Gloria-Ann Seel, director of addictions at AtlantiCare, 340 people out of 470 who came in contact with recovery specialists accepted some form of help, many opting for long-term treatment.

Those who want to can get paired off with staffers with the Support Team for Addictions Recovery, or STAR — another grant-funded project — who will check in regularly to keep them engaged. 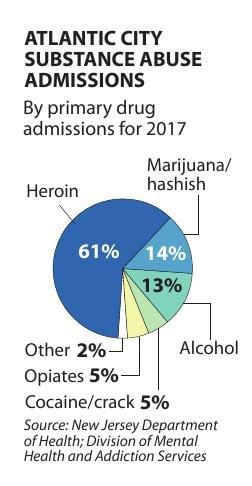 AtlantiCare also offers Suboxone treatment at a Hammonton location and is applying for a license to administer the drug in the city, Drew said. Until that time, the hospital has purchased a bus to shuttle addicted people to treatment elsewhere in the county.

Getting someone into a center can be complicated, Drew said. Where are the available beds? What kind of insurance do they have? Will it pay?

Martin, who celebrated five years clean in March, doesn’t think his background makes him any more equipped to help than his peers.

But Seel saw something in him when he interviewed for the position in September and told his story, including his recovery and work at the John Brooks Recovery Center.

Those who work in the field and haven’t experienced addiction, she said, try to make the process totally about the person dealing with addiction, which is useful.

But Martin speaks the language of addiction. He found hope after years of feeling down and out. Now, working in a city with increasing numbers of addicted people, he wants them to know they aren’t in the fight alone.

ATLANTIC CITY — Shamirah Howard, 26, is trying to keep her young son on the right path, whic…

How Atlantic City is working toward getting healthy

ATLANTIC CITY — In a city as diverse in demographics and economic status as Atlantic City, h…

ATLANTIC CITY — The seaside resort made famous for catering to people’s vices has been relatively silent on the issue of recreational cannabis.

For the staffers who ride the Hope One mobile recovery unit, the work is personal

Who's running for Atlantic City Council in 2019?

A pharmacy near you will be giving out naloxone June 18

Residents of New Jersey will be able to obtain free naloxone June 18 at local pharmacies as part of an initiative to combat opioid abuse, the …

Local pharmacies give out Narcan as part of state program

UPPER TOWNSHIP — The 30 or so people who came in to Village Pharmacy on Tuesday morning to pick up a free naloxone kit cut across genders, age…

MAYS LANDING — The nearly $18 million John Brooks Recovery Center inpatient treatment facility is on schedule to open in the spring. 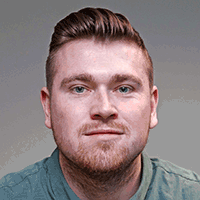