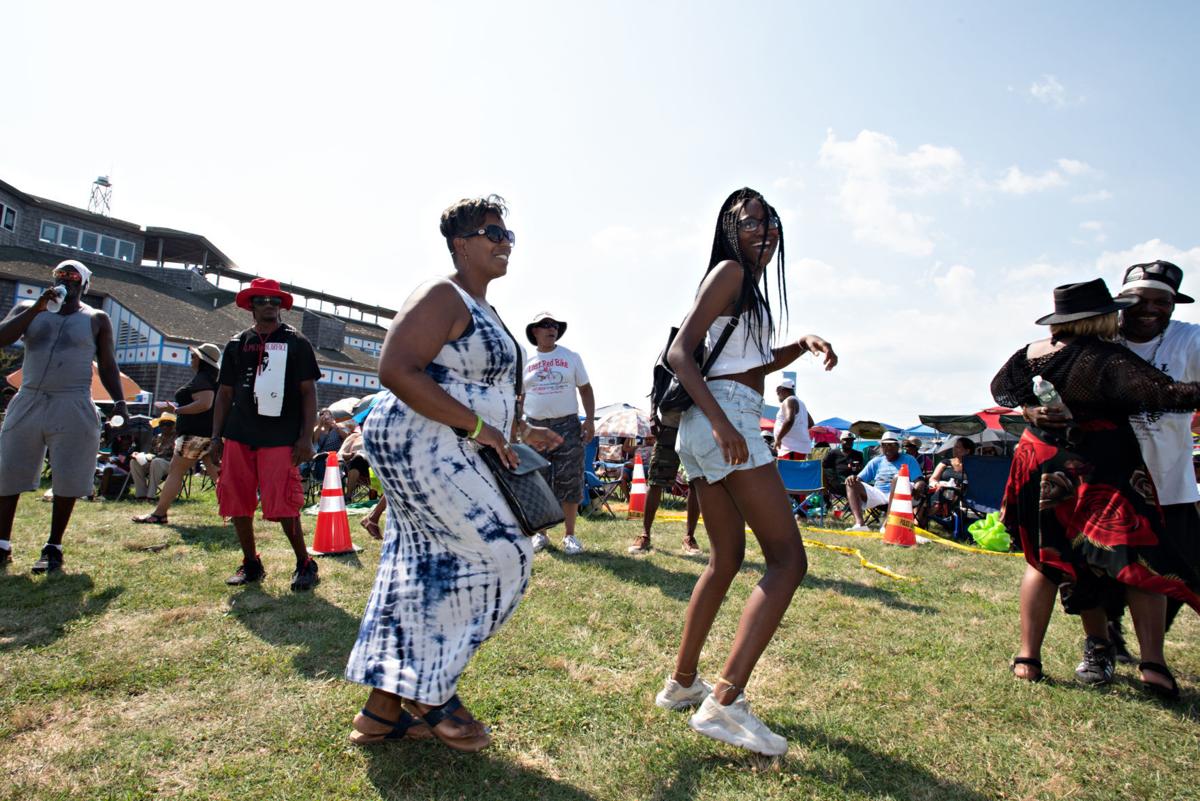 On July 20th 2019, at Gardner’s Basin in Atlantic City, a concert open to the public was held with a variety of local and regional musical acts, with Ladies of Sky, GQ, and Emulsion being the headline acts. (l-r) Angela Rose-Bounds of Lawnside and Chase Smith of Virginia dancing the Slide. 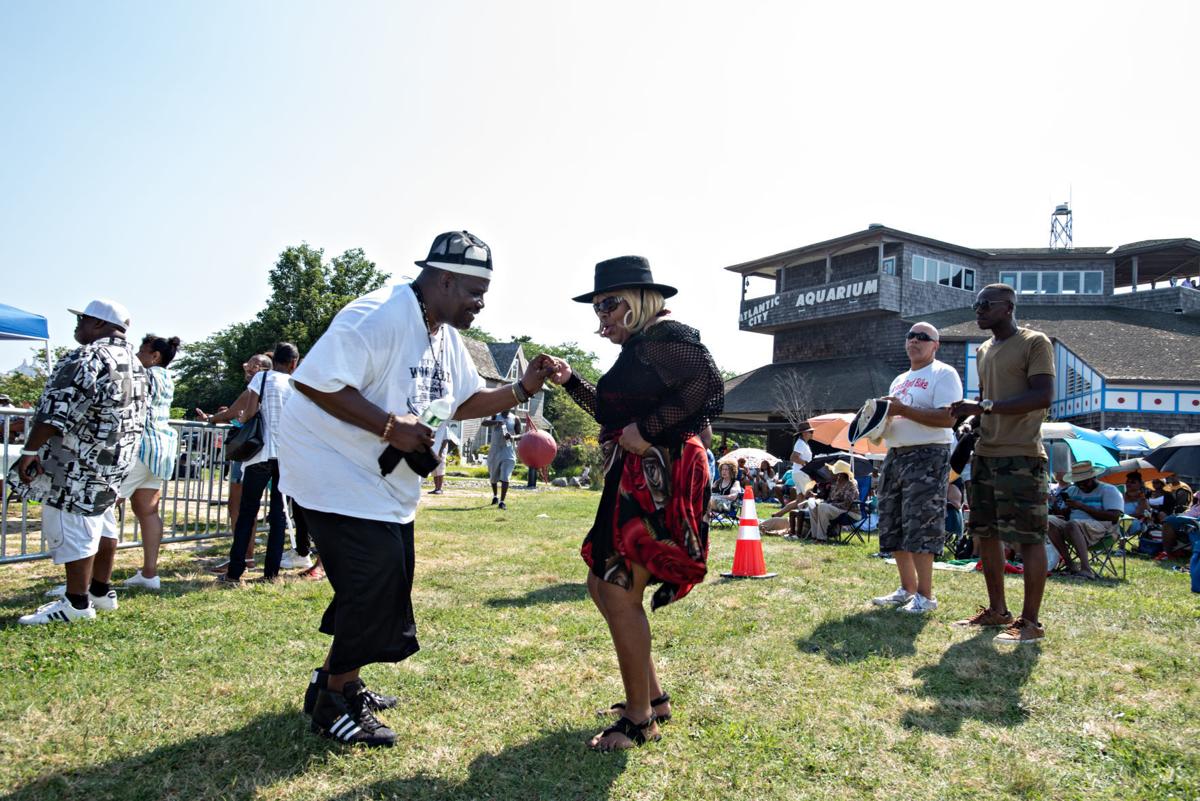 On July 20th 2019, at Gardner's Basin in Atlantic City, a concert open to the public was held with a variety of local and regional musical acts, with Ladies of Sky, GQ, and Emulsion being the headline acts. 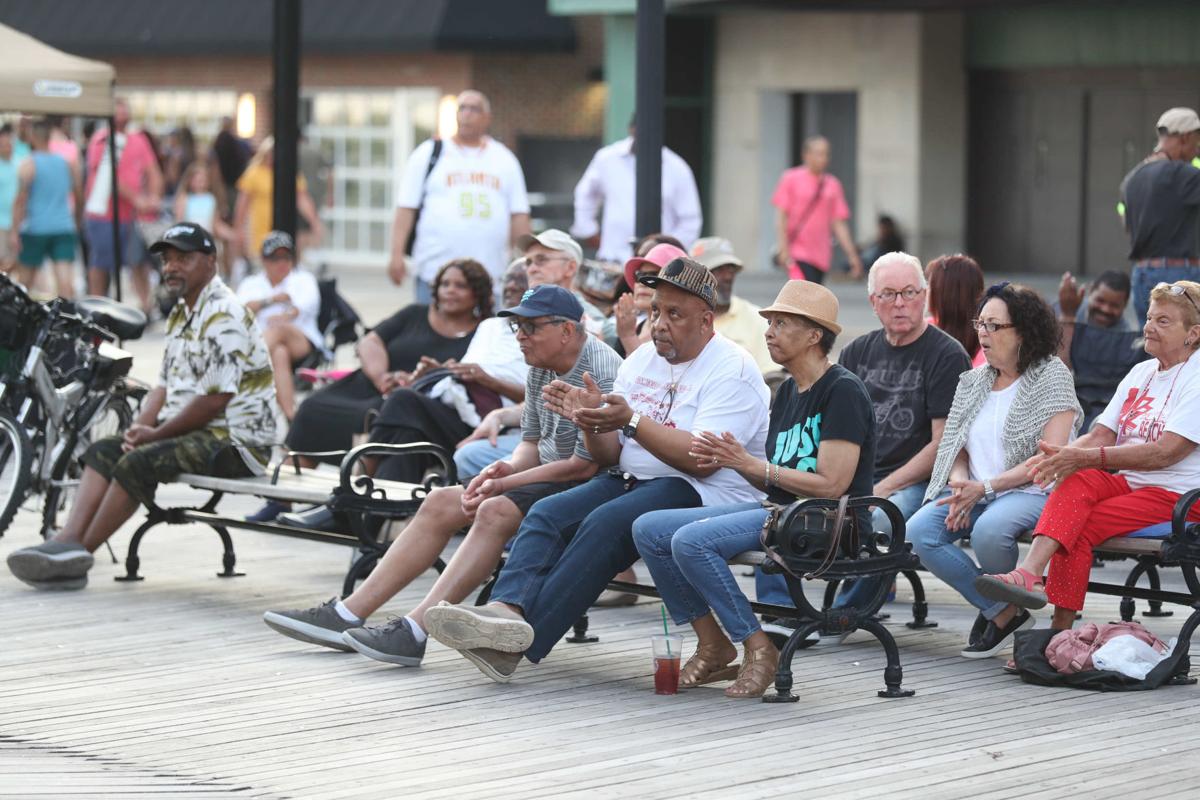 Residents, visitors and passers-by take in a free jazz concert at Kennedy Plaza on the Atlantic City Boardwalk. 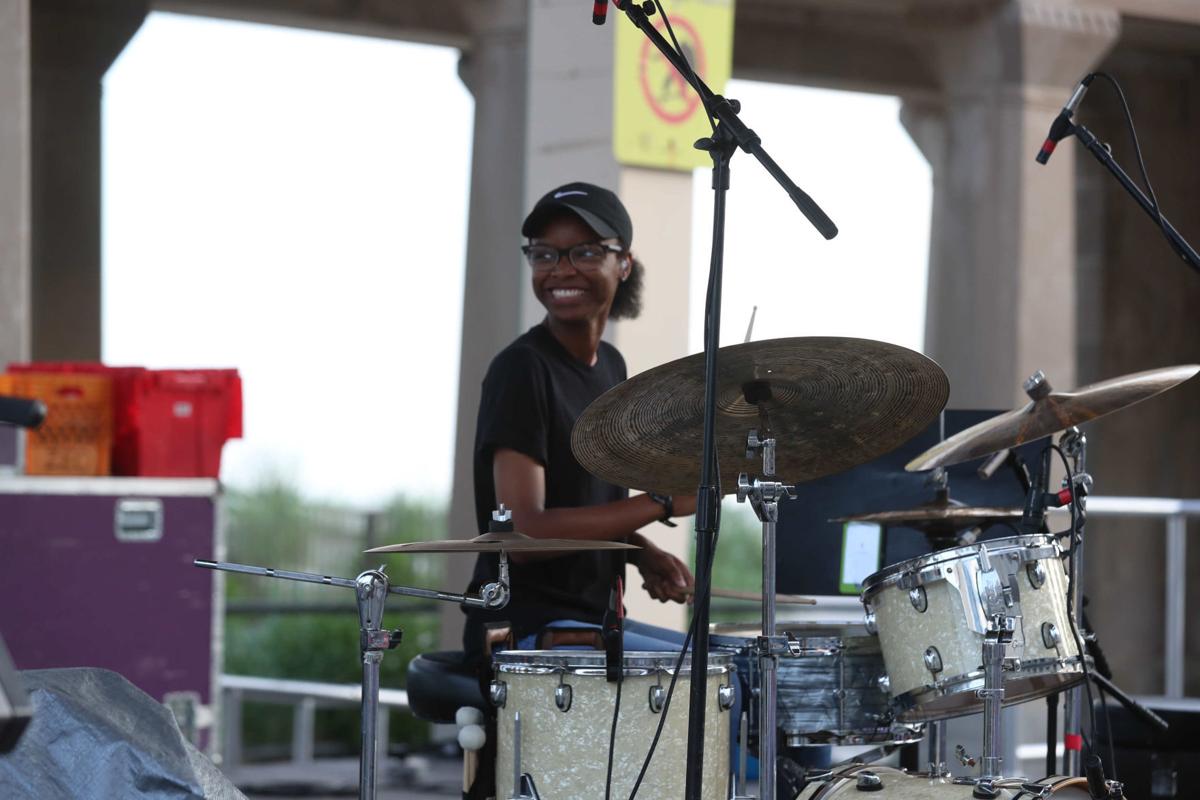 On July 20th 2019, at Gardner’s Basin in Atlantic City, a concert open to the public was held with a variety of local and regional musical acts, with Ladies of Sky, GQ, and Emulsion being the headline acts. (l-r) Angela Rose-Bounds of Lawnside and Chase Smith of Virginia dancing the Slide.

On July 20th 2019, at Gardner's Basin in Atlantic City, a concert open to the public was held with a variety of local and regional musical acts, with Ladies of Sky, GQ, and Emulsion being the headline acts.

Residents, visitors and passers-by take in a free jazz concert at Kennedy Plaza on the Atlantic City Boardwalk.

ATLANTIC CITY — A free concert series returned to Gardner’s Basin this year after a three-year hiatus, and so did locals, beach chairs in hand, to sit in the grass and enjoy an entertainment staple they thought they’d lost forever.

“People were heartbroken,” said Judah Dorrington, a city resident and one of the scheduled performers.

Dorrington and other residents attended a news conference in late May announcing the rhythm-and-blues-themed concert series would return with renewed funding from the Casino Reinvestment Development Authority.

“We’re bringing back something that has to do with our culture,” she said in May. “Everybody’s invited, but this is our culture.”

While Atlantic City’s nine casinos draw national acts, some community members say a heightened attention to supporting the local entertainment scene could enhance quality of life and contribute to the city’s economic revival.

The Urban Land Institute recommended this approach in its 2014 advisory report to both boost the tourism industry and attract permanent residents.

“Tourists are increasingly searching out ‘offbeat’ or hidden features of places to add to their store of experiences,” the report states. “This change means that the indigenous offerings of the Atlantic City community can be a significant contributor to the economic growth of the tourist industry.” 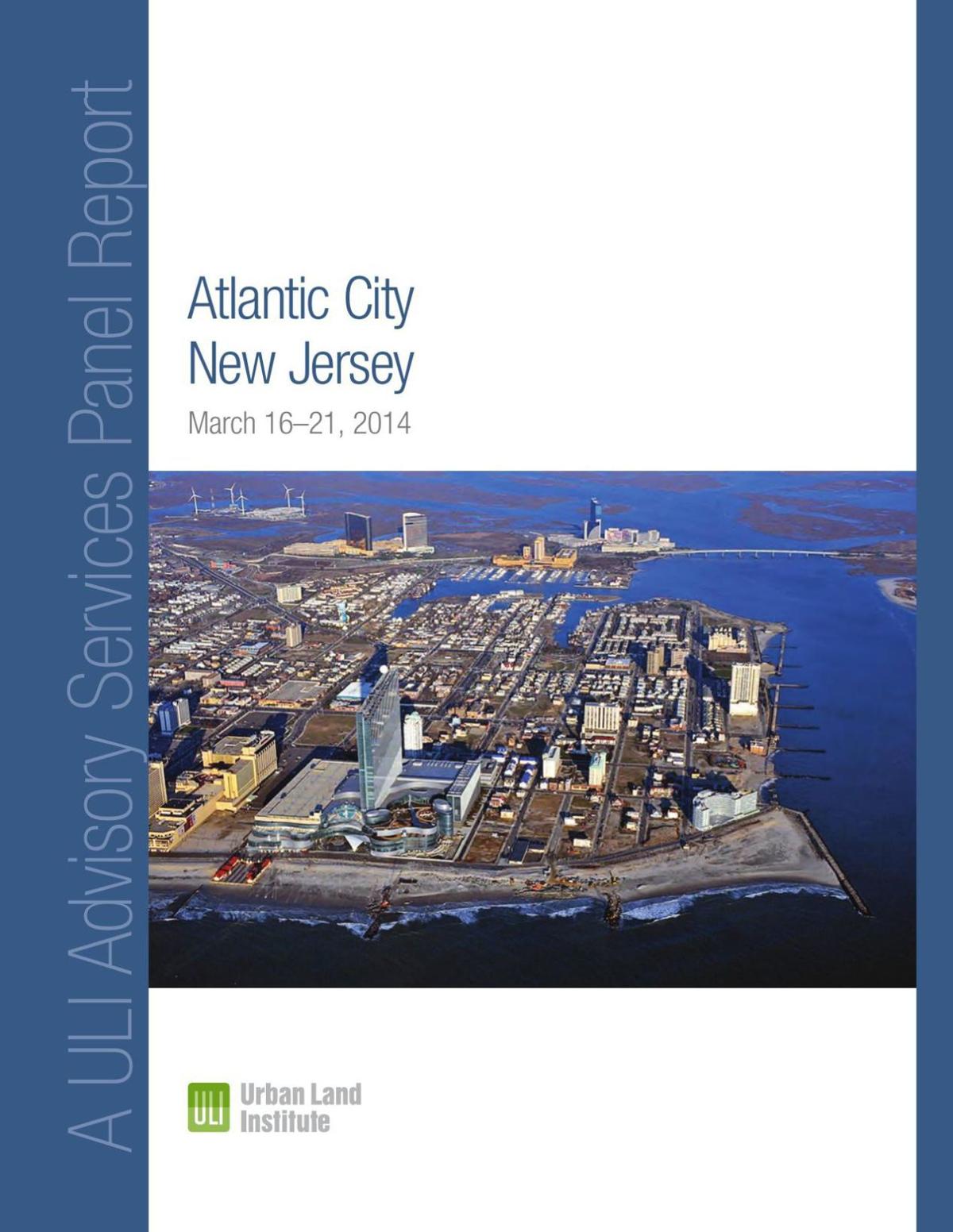 “This civic energy can bring more hope to the project of revitalizing the city, because they enable community members to feel pride in their own work as well as the efforts of their neighbors,” the report states.

In addition to bringing back the Gardner’s Basin concerts, the CRDA also spent $1 million for free jazz concerts at Kennedy Plaza on the Boardwalk this summer.

“Offering free entertainment lets residents know that their city is something they can be proud of,” said Matt Doherty, executive director of the CRDA. “It was fashioned to inject a happy impact on the people, and we believe it is succeeding.”

But some say the city could do more, including adding more venues and better utilizing the ones it already has.

“There’s been a gap too long for the entertainment scene,” Mayor Frank Gilliam Jr. said. “That’s why you see so many people coming out to the summer concert series in Gardner’s Basin, because it’s actually a part of the culture.”

Gilliam said there should be more jazz clubs and small venues such as Club Harlem, which once gave vibrancy to Kentucky Avenue.

“I feel like now we forget that there were small clubs with, like, real musicians,” said local musician Sherode Dandridge-Jamison, 23, of Atlantic City.

Instead of going to places such as Philadelphia and New York, one of his aspirations is to sell out Dante Hall Theater in the city’s Ducktown neighborhood.

“All of the talented individuals gravitate to these oversaturated hot spots, and then they leave a void, a vacancy of culture and art and youthful exuberance,” Dandridge-Jamison said.

Asbury Park Councilwoman Eileen Chapman credits the culture in her town with bringing that Monmouth County city back to life.

“I don’t know what would have happened if people weren’t still coming here for music even during the darker days,” she said. “Music was still a part of keeping people engaged even during those darkest hours.”

According to a 2017 report by the Asbury Park Press detailing how music energized the city, the more than 1 million people who visited Asbury Park contributed to the local economy.

“Music Saved Asbury Park,” according to the slogan printed on a popular T-shirt sold in the city.

Chapman attributed the city’s ability to embrace its entertainment scene in part to Bruce Springsteen, who continues to make appearances at venues such as the Stone Pony.

“Had we not had that history and that legacy, we may have ended up being a forgotten town,” Chapman said.

But while Atlantic City doesn’t have The Boss, those in the music scene say there isn’t a shortage of talent.

Weiss said he booked three talented bands from the city to play a show at Bourre on New York Avenue at the end of July.

“I could probably throw a rock and hit another three that would be great young bands from Atlantic City,” he said.

Weiss started his business supporting local bands five years ago, when he said the music scene in the city was “on life support.” He worked with Le Grand Fromage and the BoneYard, two local venues that have since closed. Still, he continued to work to promote local talent.

He said it can be tricky for bars and local businesses to support original music and turn a profit because shows and the revenue they draw can be unpredictable.

But Weiss said things are changing.

He credited new businesses such as Bourre for embracing local acts.

Gilliam said the city has its own plan to generate more venues by re-evaluating the properties the city owns, whether commercial or residential, and seeking new uses for them.

He said once a property is selected, the city will put it up for auction or file a request for proposals to make sure its vision matches with that of an investor.

Those plans have not materialized yet, but if these new venues do come to pass, Weiss said, he’ll be involved one way or another.

“I think it’s important, because people need outlets. There’s really no better outlet than music,” Weiss said. “It gives people a place to go to be themselves. It’s fun as hell.”

PHOTOS from a free summer concert in Gardner's Basin

Quality of life in Atlantic City: What do residents need?

ATLANTIC CITY — Shamirah Howard, 26, is trying to keep her young son on the right path, whic…

For the eighth time, a local organization is sponsoring a celebration of Atlantic City’s musical past on Kentucky Avenue and a pep rally for i…

ATLANTIC CITY — With a focus on diversifying the regional economy to include sectors outside casino gaming and tourism, the greater Atlantic C…

ATLANTIC CITY — The Atlantic City Arts Foundation released “48 Stories” in June, a collection of 48 stories from the resort. Next week, they w…

ATLANTIC CITY — The Parish of St. Monica is accepting proposals for the lease or sale of Dante Hall Theater of the Arts with hopes for it to c…