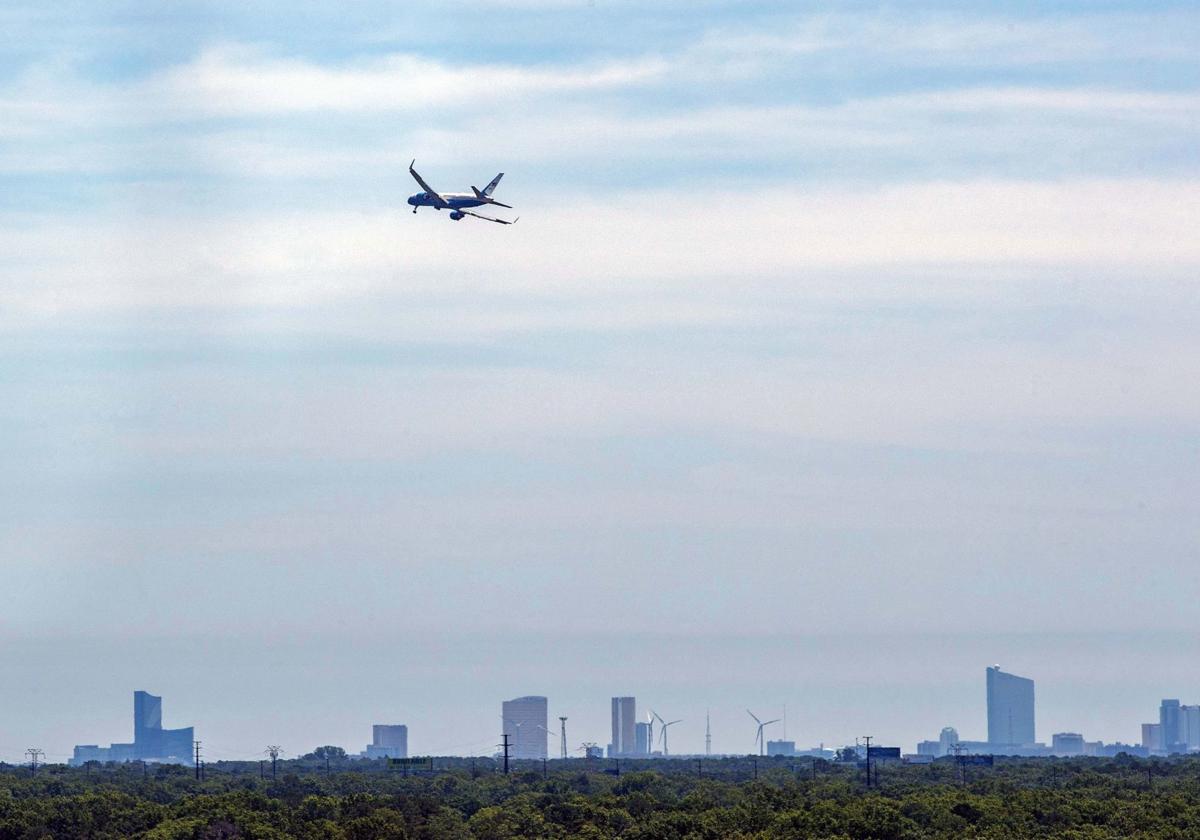 A plane flies over the Atlantic City skyline last week before arriving at Atlantic City International Airport in Egg Harbor Township. Officials frequently say the airport is underutilized, but numbers show it has never been a major driver of tourism to the city. Nearly 70 percent of the flights are local residents leaving the area for Florida. Spirit Airlines is the only major airline to have regular departures from the airport. 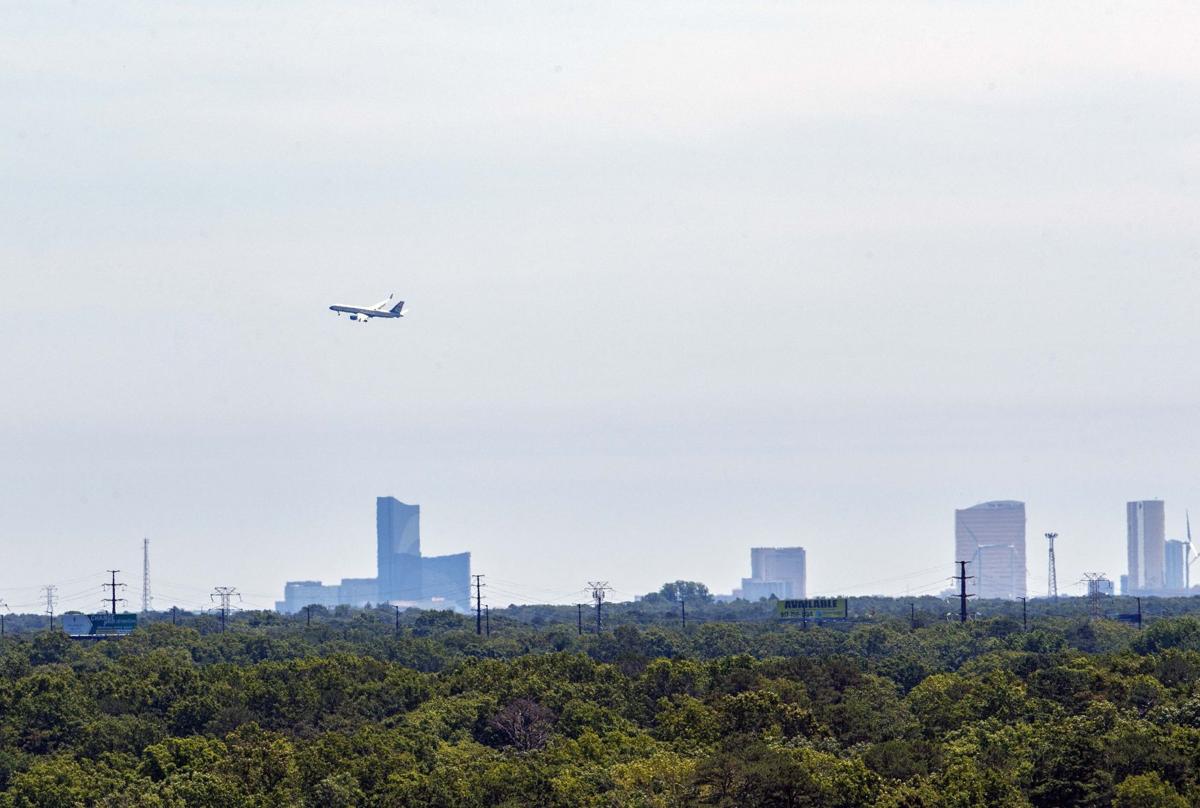 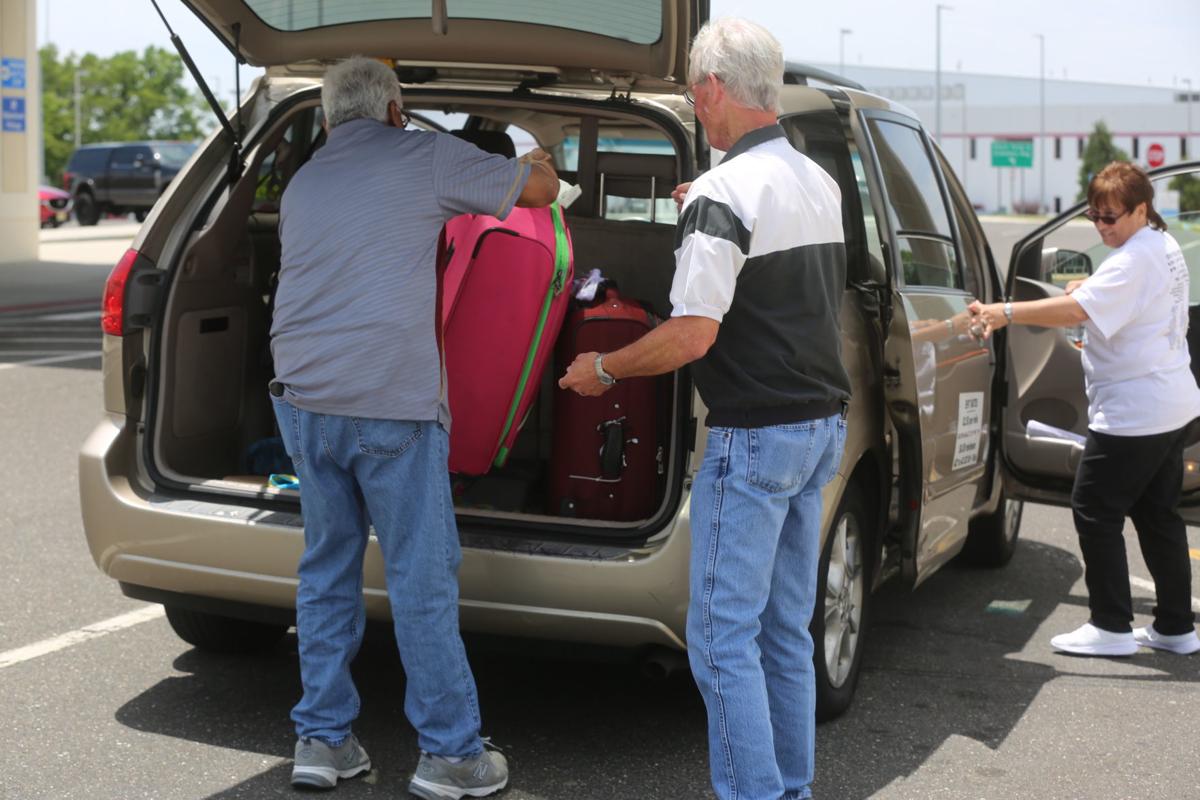 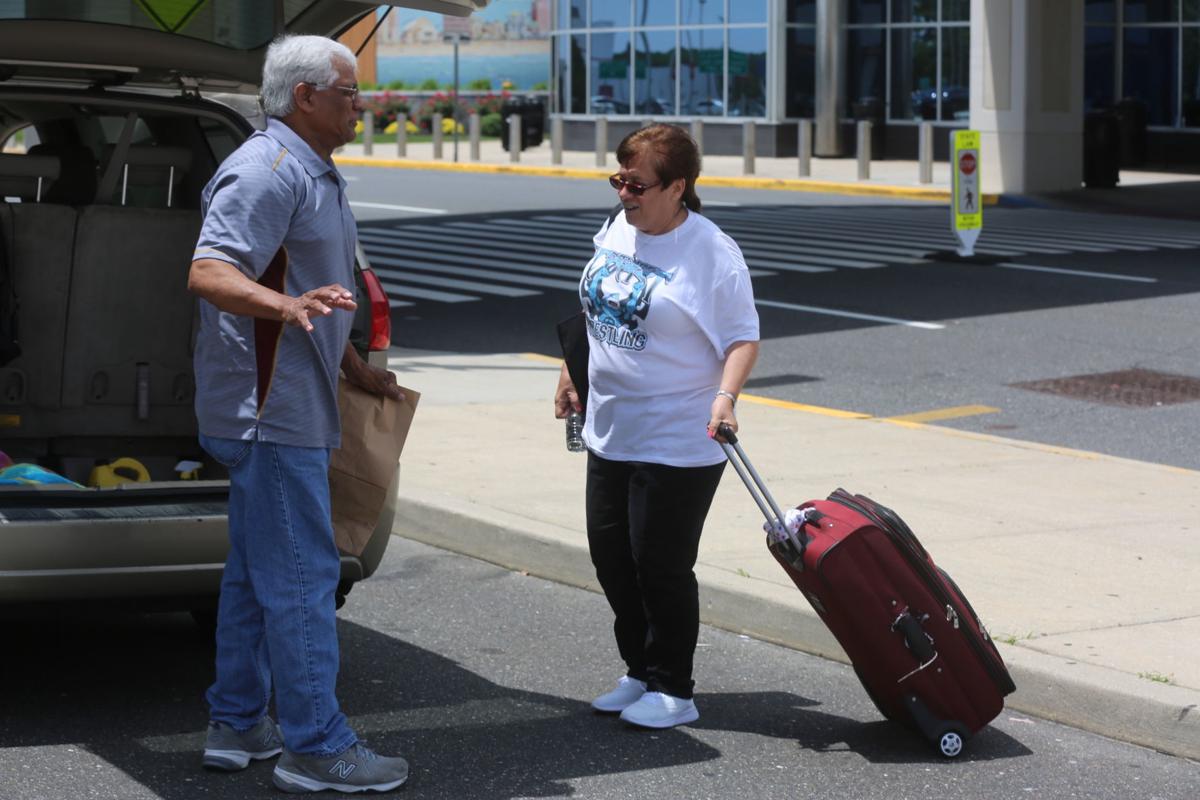 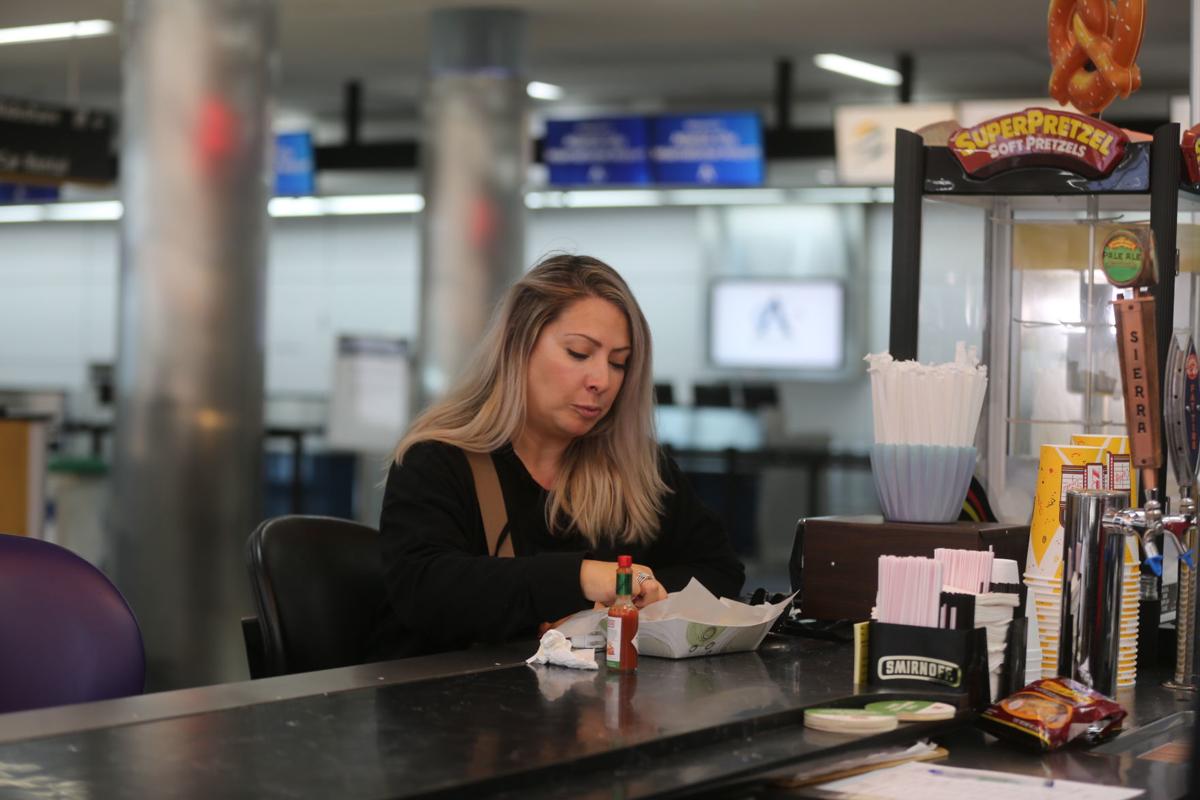 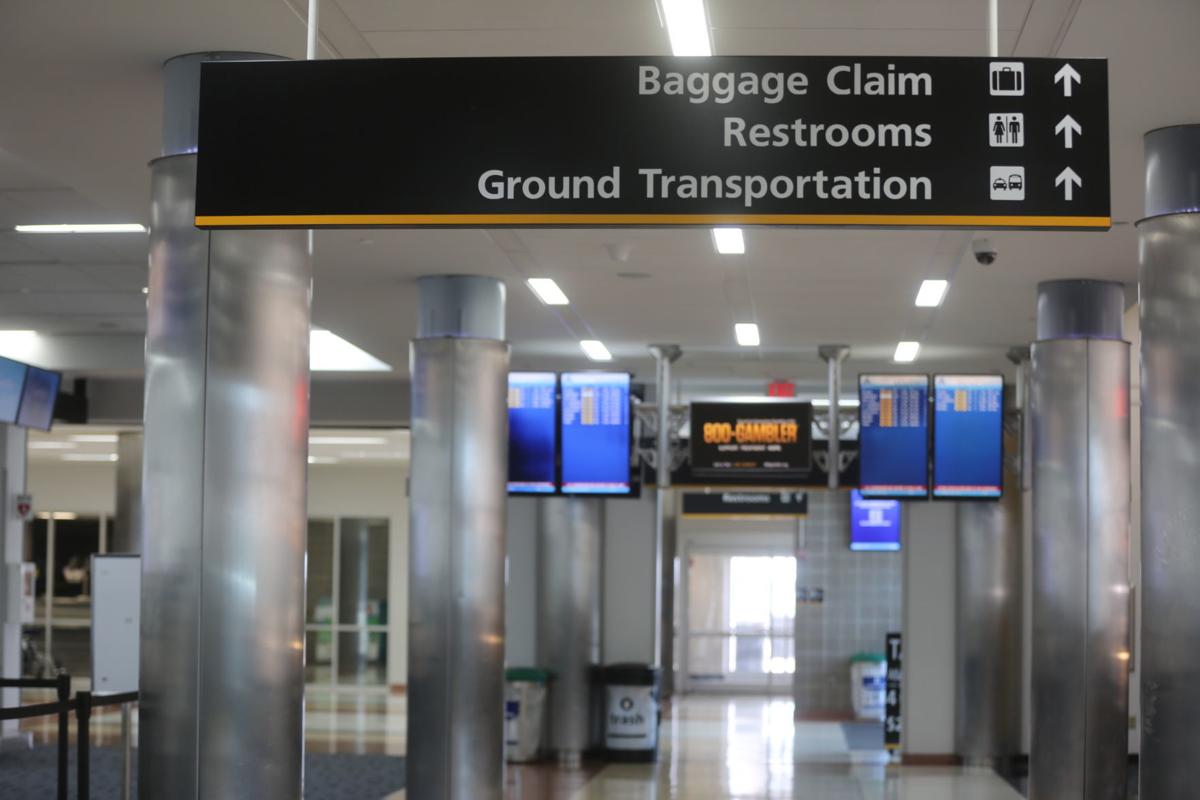 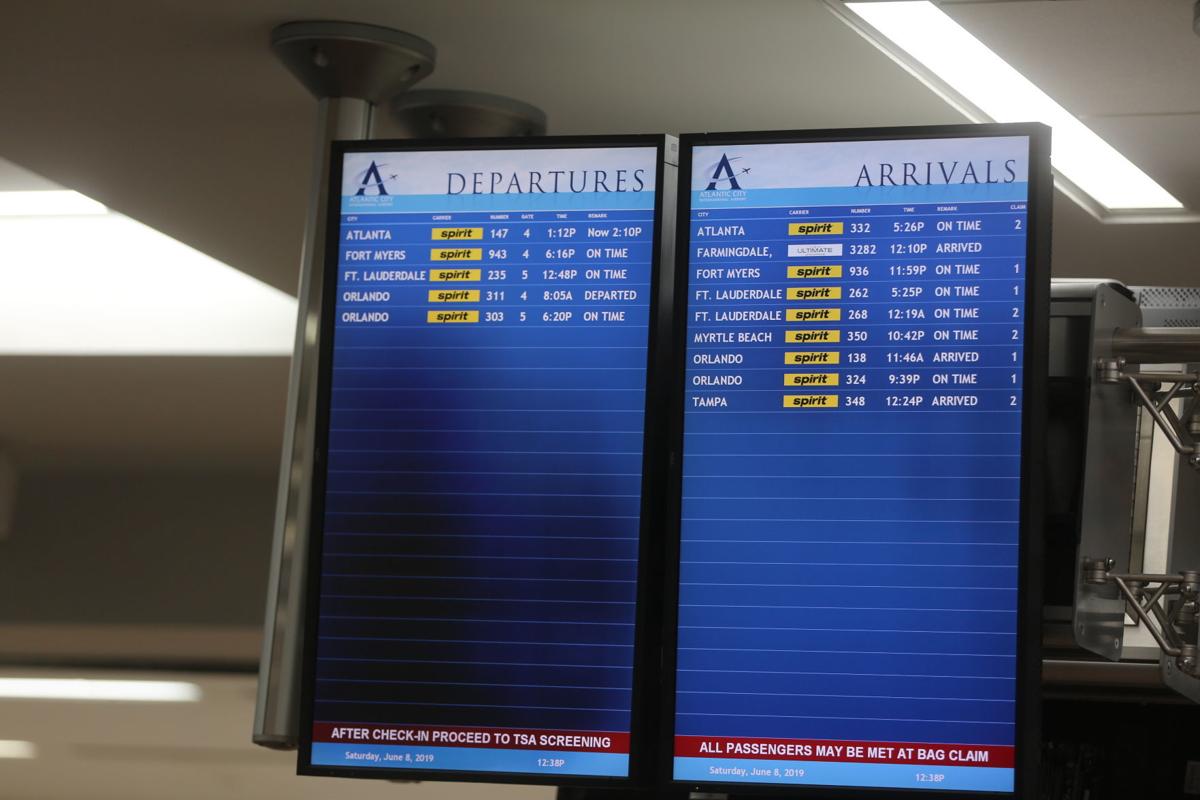 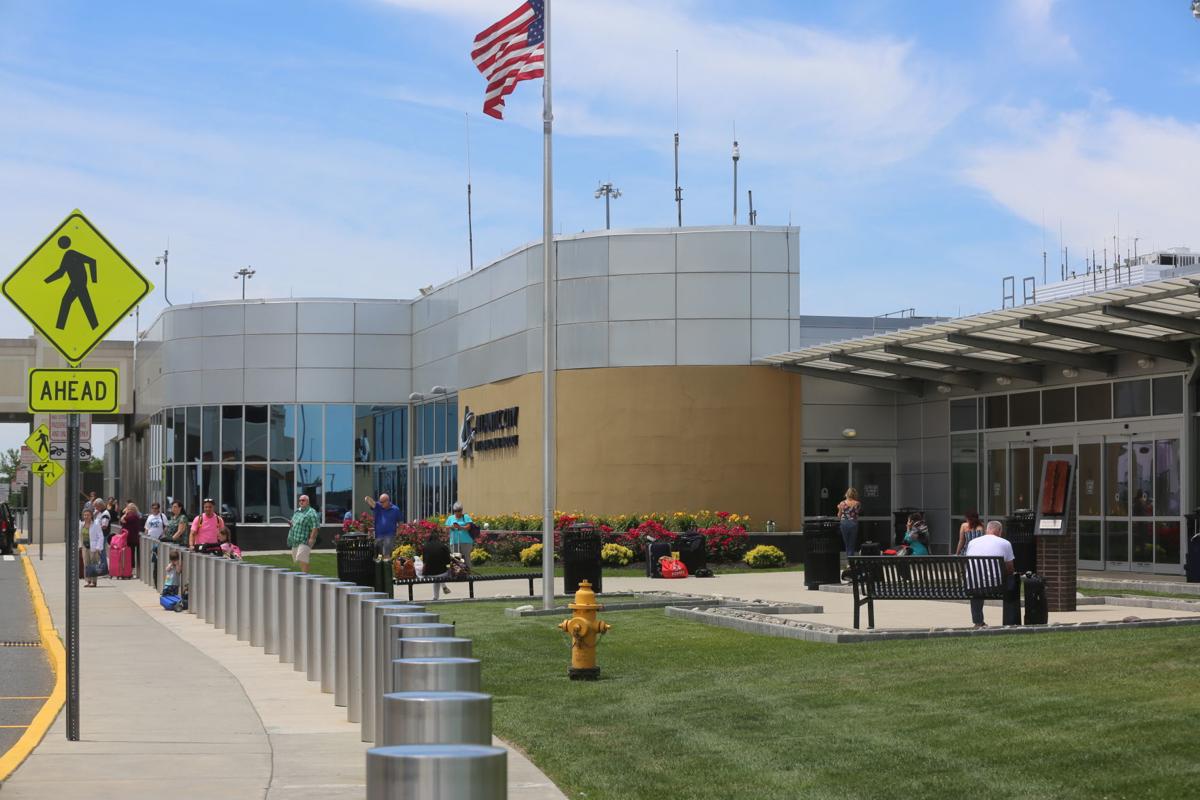 Passengers wait outside Atlantic City International Airport last month. Marla Austin says she likes the proximity of the airport, but stopped using it because she fel flight cancellations by Spirit Airlines were too common. Spirit is the only major airline flying daily out of the airport. 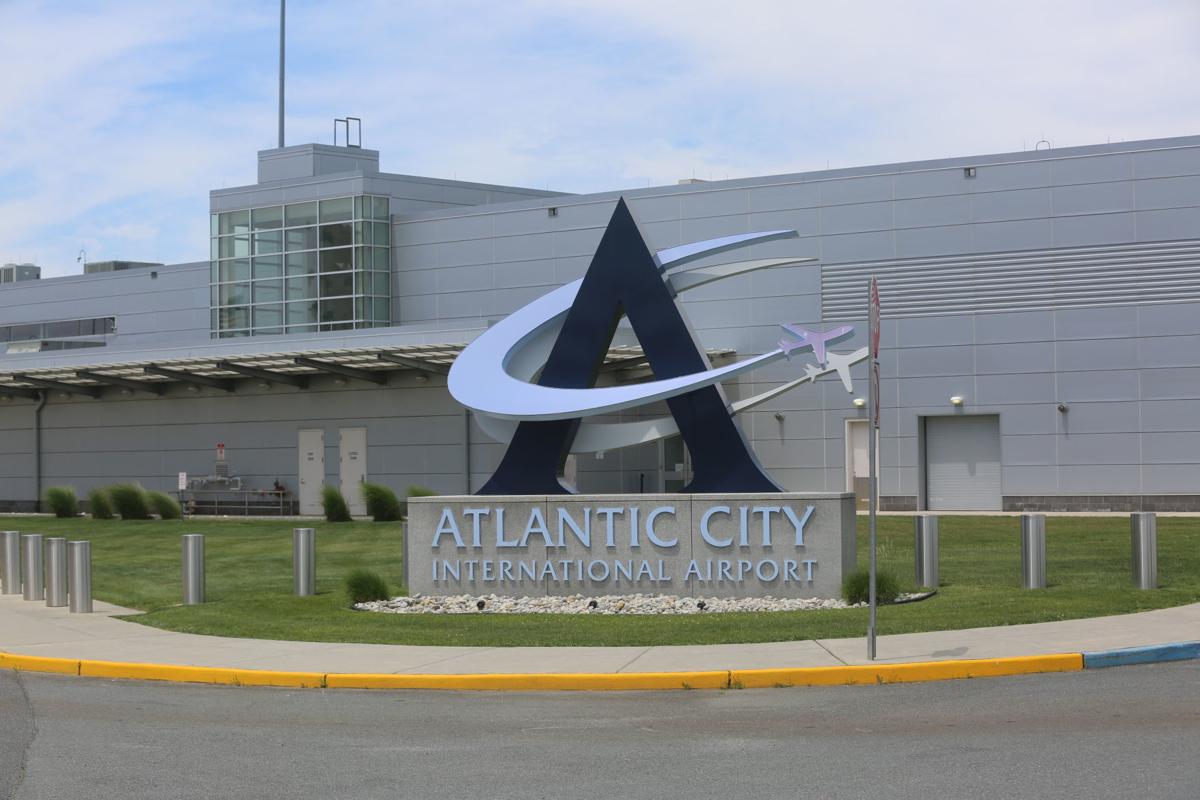 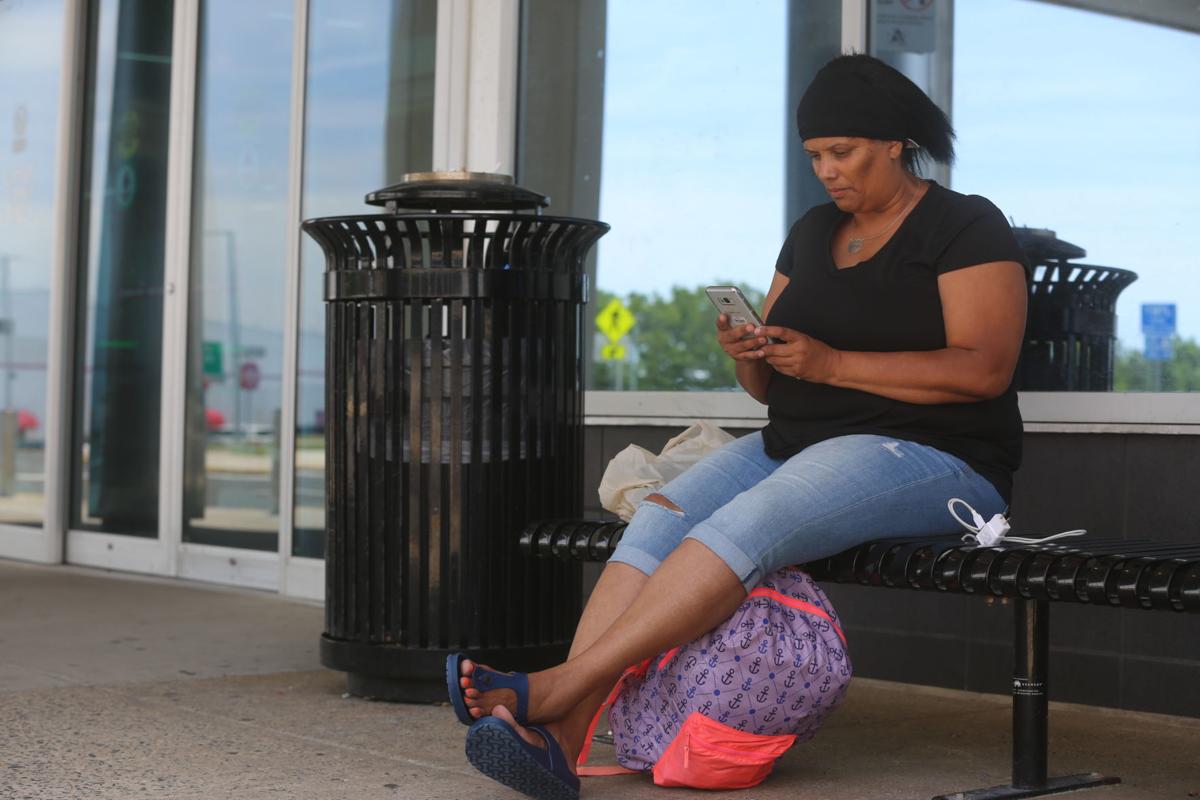 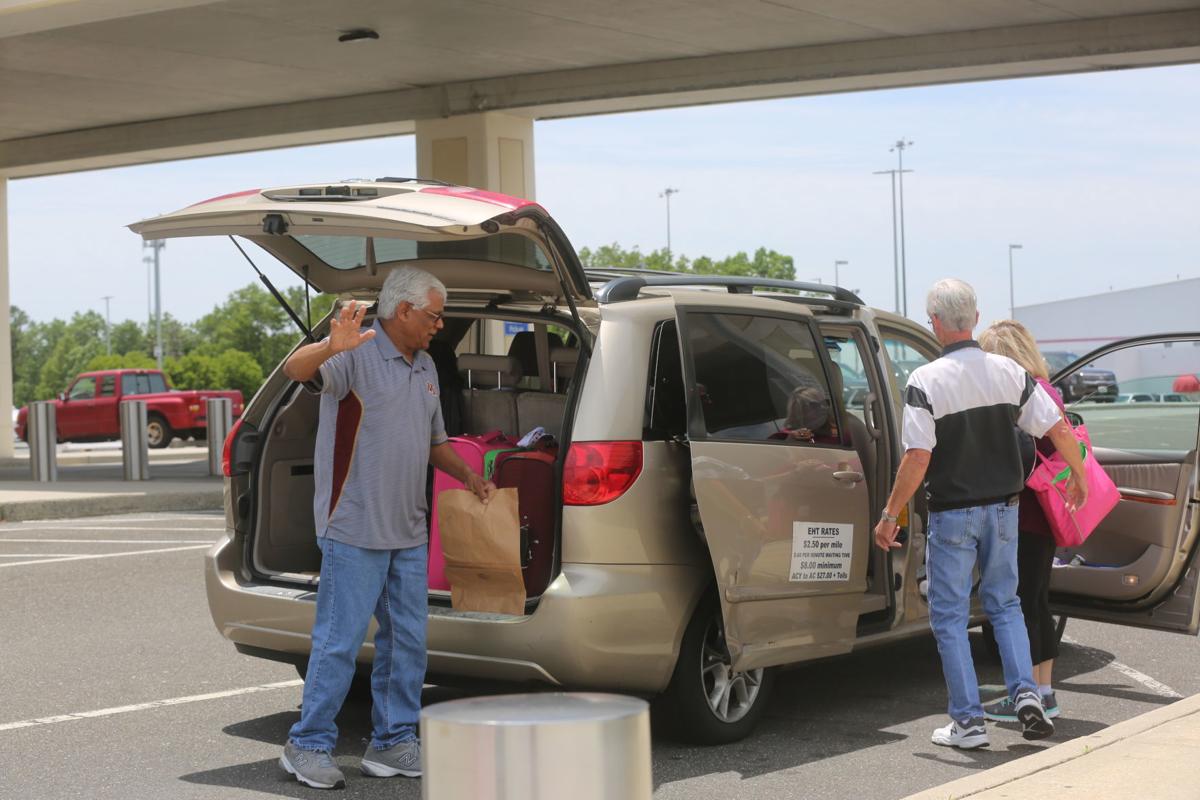 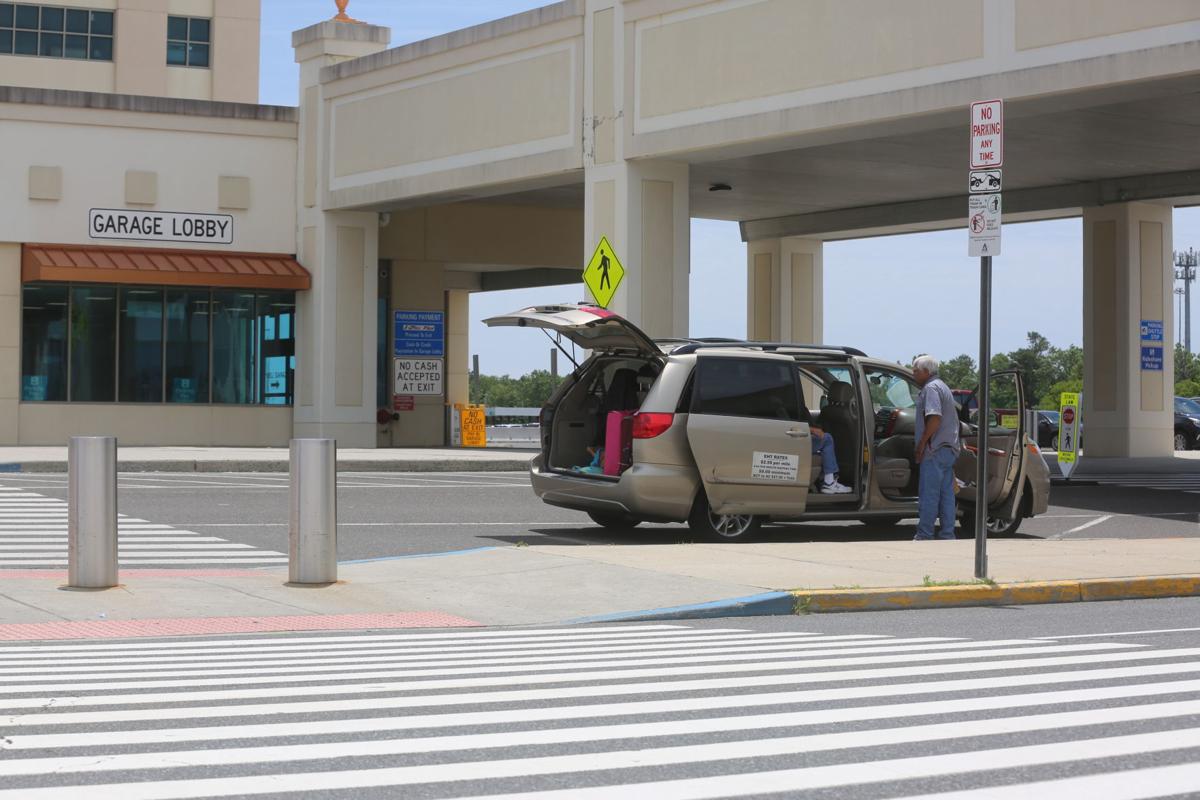 A plane flies over the Atlantic City skyline last week before arriving at Atlantic City International Airport in Egg Harbor Township. Officials frequently say the airport is underutilized, but numbers show it has never been a major driver of tourism to the city. Nearly 70 percent of the flights are local residents leaving the area for Florida. Spirit Airlines is the only major airline to have regular departures from the airport.

Passengers wait outside Atlantic City International Airport last month. Marla Austin says she likes the proximity of the airport, but stopped using it because she fel flight cancellations by Spirit Airlines were too common. Spirit is the only major airline flying daily out of the airport.

Twice a year, John Conway and his wife, Carol, fly to visit Atlantic City from their home in Tampa, Florida.

One morning in June, Conway called his regular taxi driver to meet him in front of Atlantic City International Airport to take him to Tropicana Atlantic City. There are a lot of things he likes about the local airport.

“It’s quick, simple,” Conway said as he loaded his luggage into the taxi van. “We just wish there was more airlines that came in here than Spirit.”

Conway was among a handful of travelers on a Saturday in June who were flying in to Atlantic City International (ACY) in Egg Harbor Township, where nearly 70% of the flights are local residents leaving the area for Florida vacations.

Atlantic City International is an amenity to residents living in the region, but not a driver for tourism to Atlantic City. Experts says that the airport is underutilized, but will likely never be the main source for tourists coming to visit the gambling mecca.

“I think that could be enhanced, and I think people are working to do that and again the challenge is volume,” said Joe Kelly, president of the Greater Atlantic City Chamber of Commerce. “You have to have the service match the volume.”

That catch-22 has plagued Atlantic City’s airport for decades.

Anthony Marino, a retired analyst for South Jersey Transportation Authority, was part of the team tasked with making Atlantic City International a major airport. Even at its peak of 1.4 million passengers in 2012 — a little more than a third of its annual capability — Atlantic City paled in comparison to Las Vegas’s airport. McCarran International handled more than 44 million passengers in 2018.

Marino said air is simply not a viable option for tourists to travel to get to Atlantic City.

“The main reason for that is we happen to be in South Jersey, a veritable cul de sac that has a relatively small population, and casinos have not been a draw for people to pay out of their own pocket the fare for (air travel),” Marino said.

The main mode tourists travel to Atlantic City is their own car, and Marino doesn’t see that changing.

“That doesn’t mean that people don’t want to visit Atlantic City casinos, it just means they don’t want to pay a lot of money in passenger fees to come into the town,” he said.

Attracting tourists to Atlantic City falls on the shoulders of many groups and one of the major tourism engines in the city is the Casino Reinvestment Development Authority. The CRDA has two tourism arms, Meet AC and DO AC.

Meet AC is focused on conventions and meetings in the regional market, said its CEO Jim Wood.

“We don’t do the leisure, because our air service is very light, and we rely on Philadelphia’s airport for convention delegates coming in,” Wood said.

Atlantic City’s airport would have to increase the number of flights per day from just a handful to 125, and service areas in the Midwest to become a national destination, he said. Philadelphia has that reach, but the driving distance of more than an hour into Atlantic City is a deterrent.

Wood said airlines base their flights on outbound business, so if local residents are not flying to those destinations, than they will not put the flights in.

“You need a really steady flow of business being generated in your area for our airlines to grow,” Wood said.

ACY Director Tim Kroll said he sees the airport playing a vital role in tourism and commerce for the whole South Jersey region, but he said the airport is looking to expand beyond commercial to maintenance and cargo.

Kroll began at the airport at its height of service seven years ago, right before the decline in the economy, he said.

“We are seeing a nice rebound now. We did over 1.2 million passengers last year and so far we’ve seen a 4-5 percent increase from this year compared to last year,” he said.

Air travel is closely related to the economy, and the onboarding of new casinos in Atlantic City has helped the airport. Kroll said that to continue to increase usage at the airport, more airlines are needed.

“If we can increase the number of visitors, it helps to attract airlines to show them that we have inbound and outbound passengers,” Kroll said.

The downside of having one airline was apparent on this June afternoon when an outgoing flight to Atlanta was canceled, stranding Maria Austin, 49, who was in town visiting family.

Austin said she liked the proximity of ACY, but stopped using it because she felt flight cancellations by Spirit were common. Due to the limited flights available, it was difficult to get a new flight back without traveling to Philadelphia.

“It’s a convenience, if you cross your fingers and pray to God,” Austin said.

She said that those kinds of experiences leave a bad taste in the mouths of tourists, and drive them to other locations.

Kroll said ACY is actively engaged in talks with other airlines to increase service. He said there is potential for growth in tourism to Atlantic City, especially in the off-season months.

The airport markets itself as convenient, uncongested and easy to use, and many passengers seem to agree.

Susan DeSantis, 40, of Fort Lauderdale, Florida, was waiting at the airport’s cafe for her friends to pick her up.

The group was heading to Atlantic City to celebrate DeSantis’ birthday.

DeSantis said she didn’t even know about the local airport before she began researching flights to the area but was pleasantly surprised.

How Atlantic City can become bike-friendly

How walkable is Atlantic City?

From biking to buses, how to get around Atlantic City

ATLANTIC CITY — Like he does most afternoons, Edward Selva, 26, waited for the jitney near C…

Frequent riders say buses in and out of Atlantic City convenient

ATLANTIC CITY — During the mornings inside the bus terminal at Atlantic and Ohio avenues, a …

Will the Atlantic City Rail Line ever see improvements?

ATLANTIC CITY — Kathleen Jurimas takes the 5:47 a.m. train from Atlantic City to Philadelphia for work every morning. And since the Atlantic C…

Quality of life in Atlantic City: What do residents need?

ATLANTIC CITY — When people visit the Absecon Lighthouse between 11 a.m. and 1:30 p.m. most Thursdays, the first person they see and the frien…

Atlantic City International Airport will receive an additional $1 million from the federal government for construction of a deicing facility.

What might build a bigger, better Atlantic City Airshow?

ATLANTIC CITY — The Atlantic City Airshow will bring almost a half million people to town starting Aug. 19, and is expanding with new acts and…