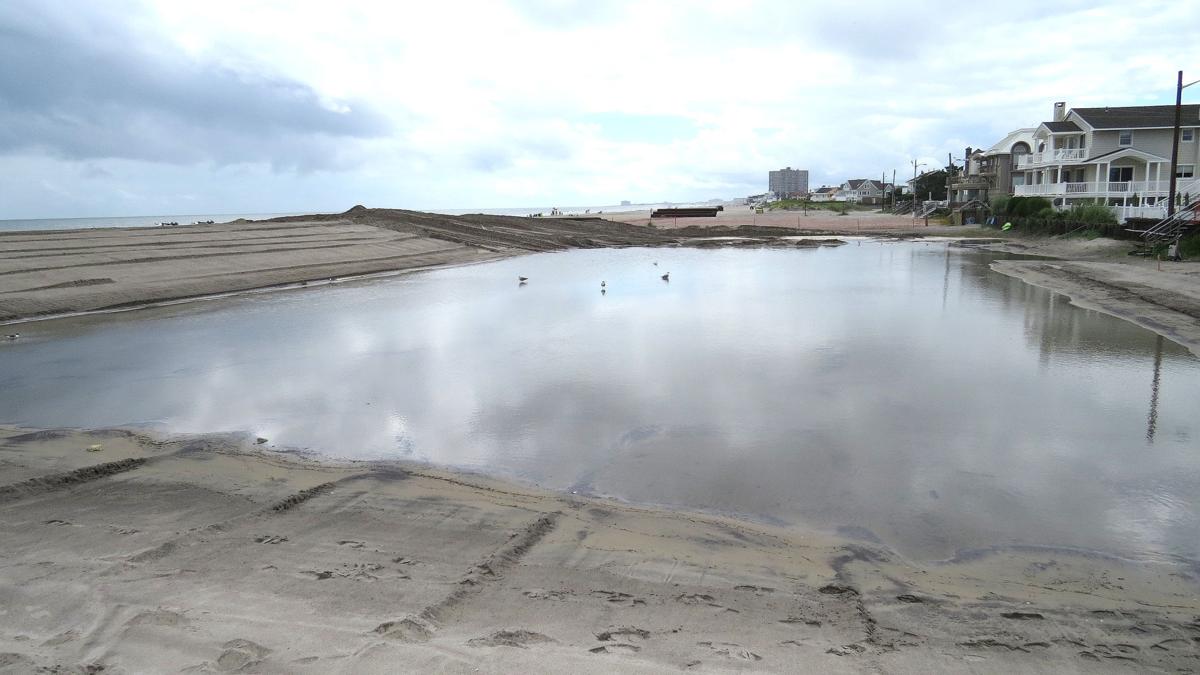 Sea gulls float in the pond behind the new sand dune near Delavan Avenue in Margate. 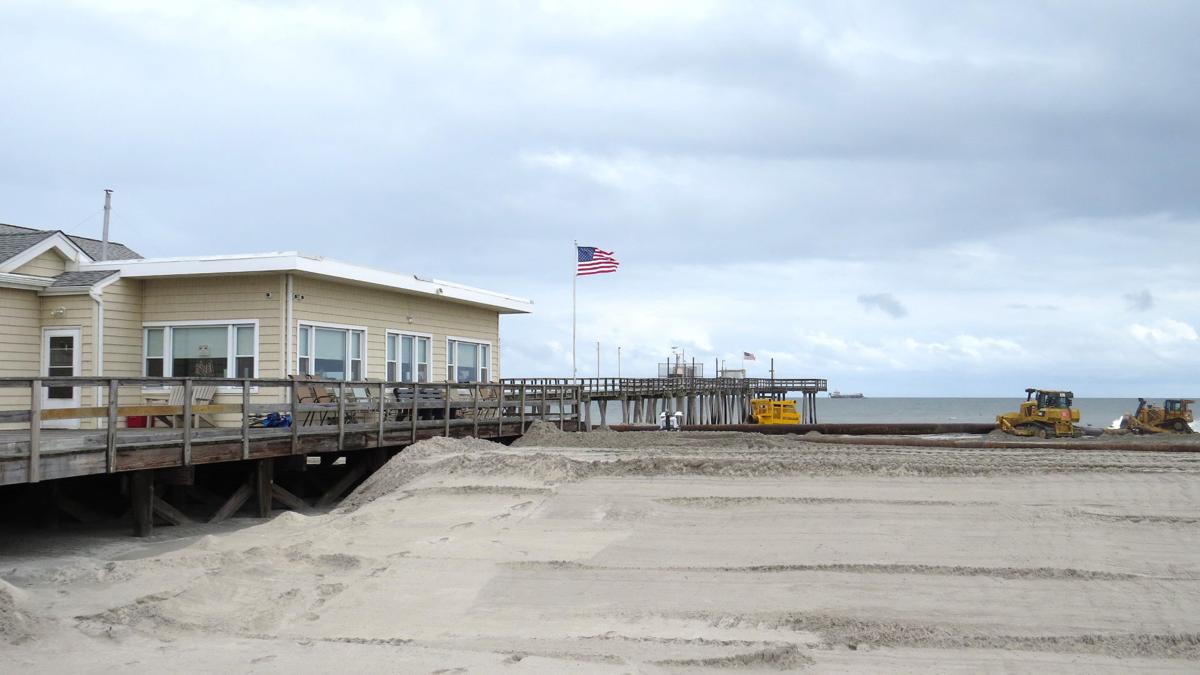 A sand dune has reached the bottom of the Margate Fishing Pier headquarters. 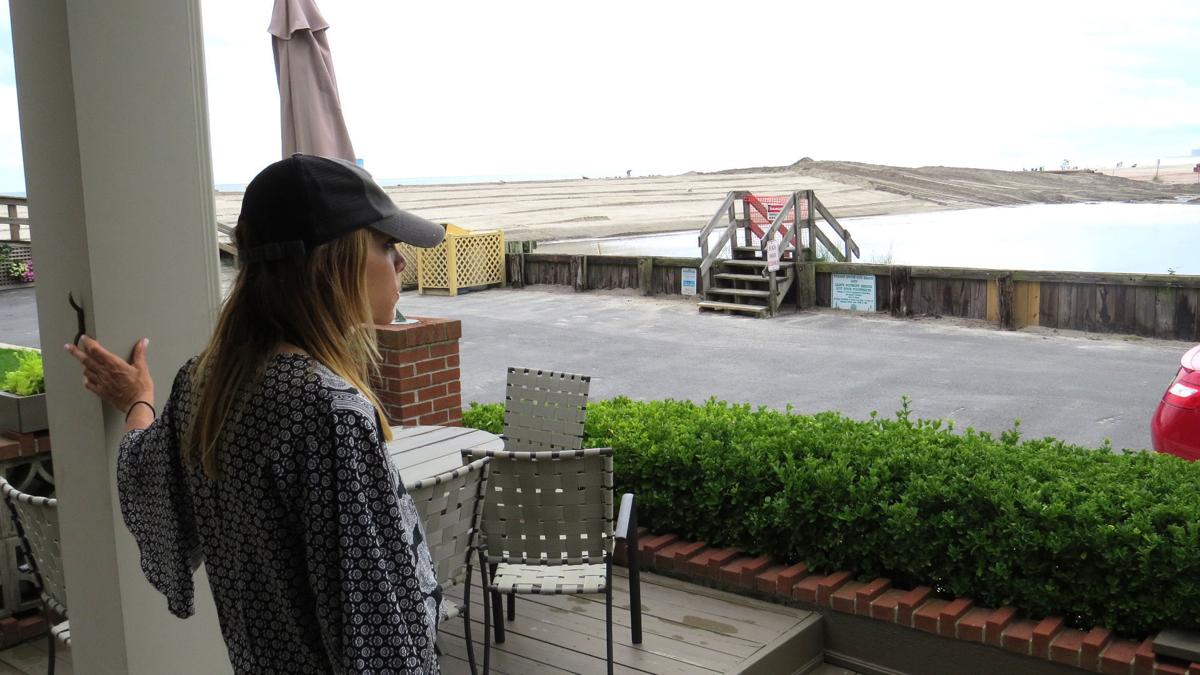 Nicole Granata of Boca Raton, Florida looks out from the porch of the home she rented for a family vacation at a large puddle of water and a wall of sand. 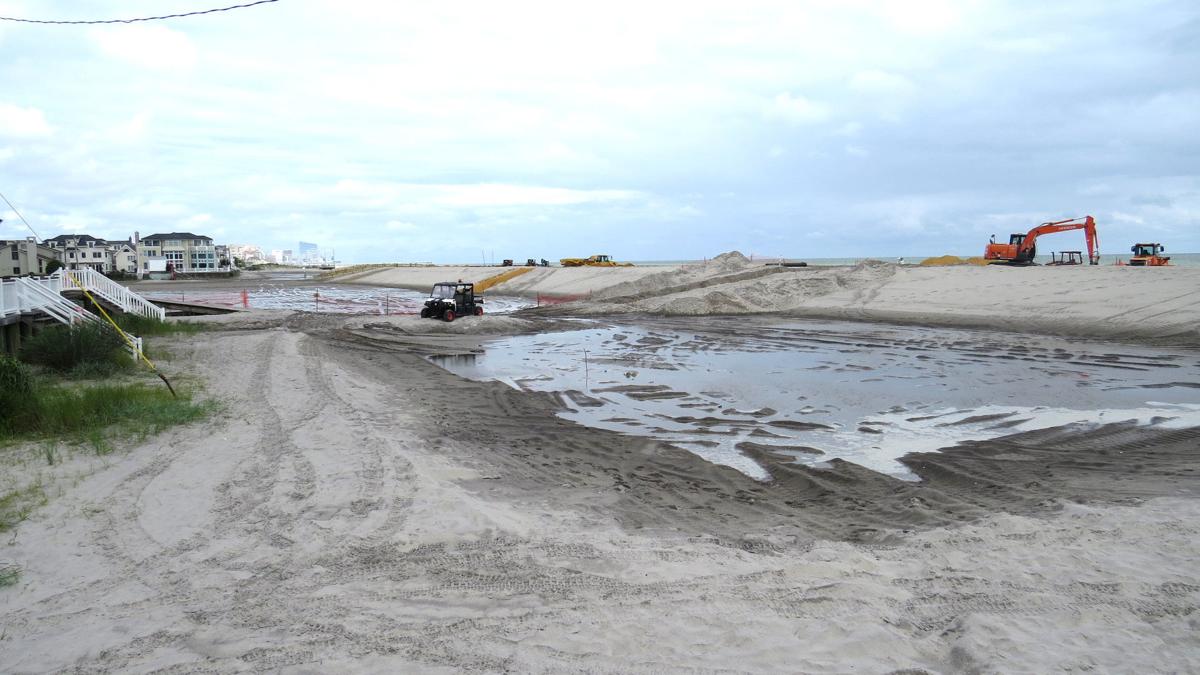 Stormwater has collected on the back side of the dune, where the beach has been lowered several feet. 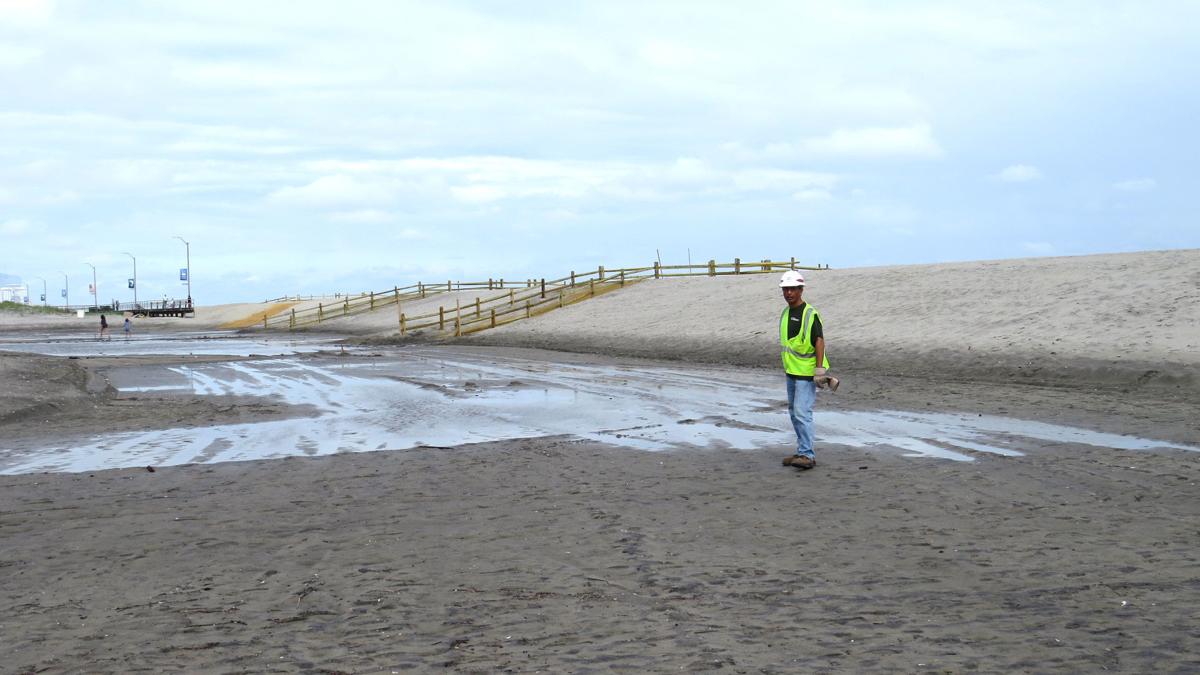 A worker checks the water table of the sand on the back side of the dune near Clermont Avenue. 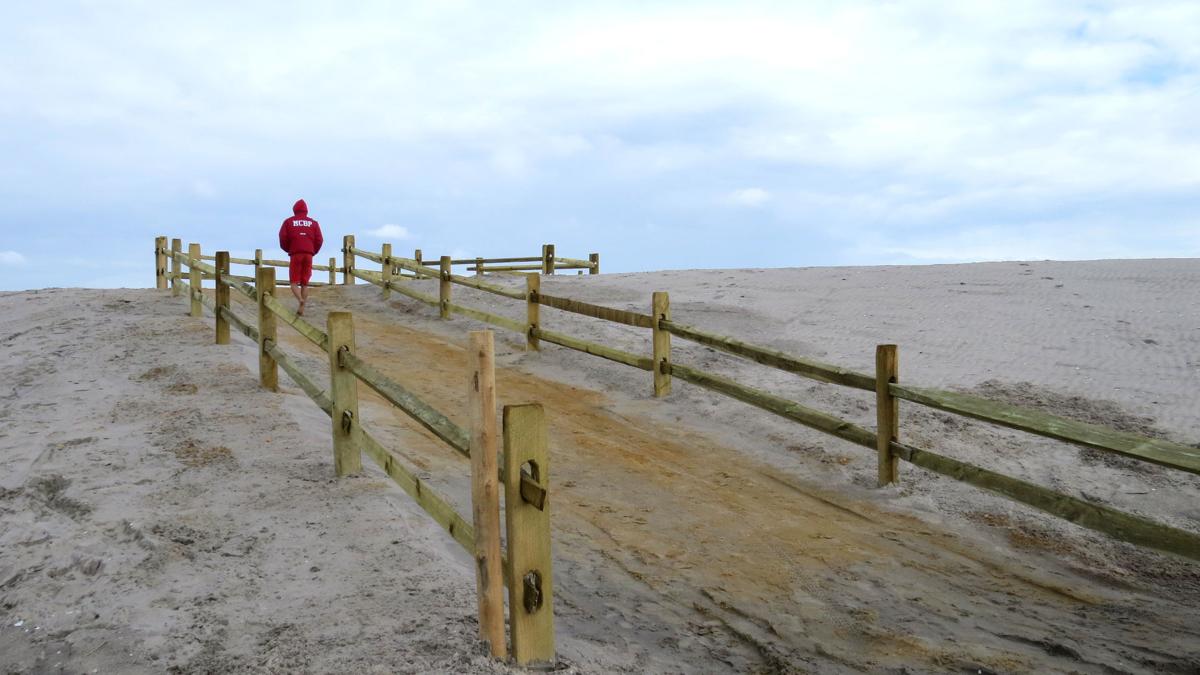 A Margate lifeguard crosses over the new dune on Clermont Avenue. 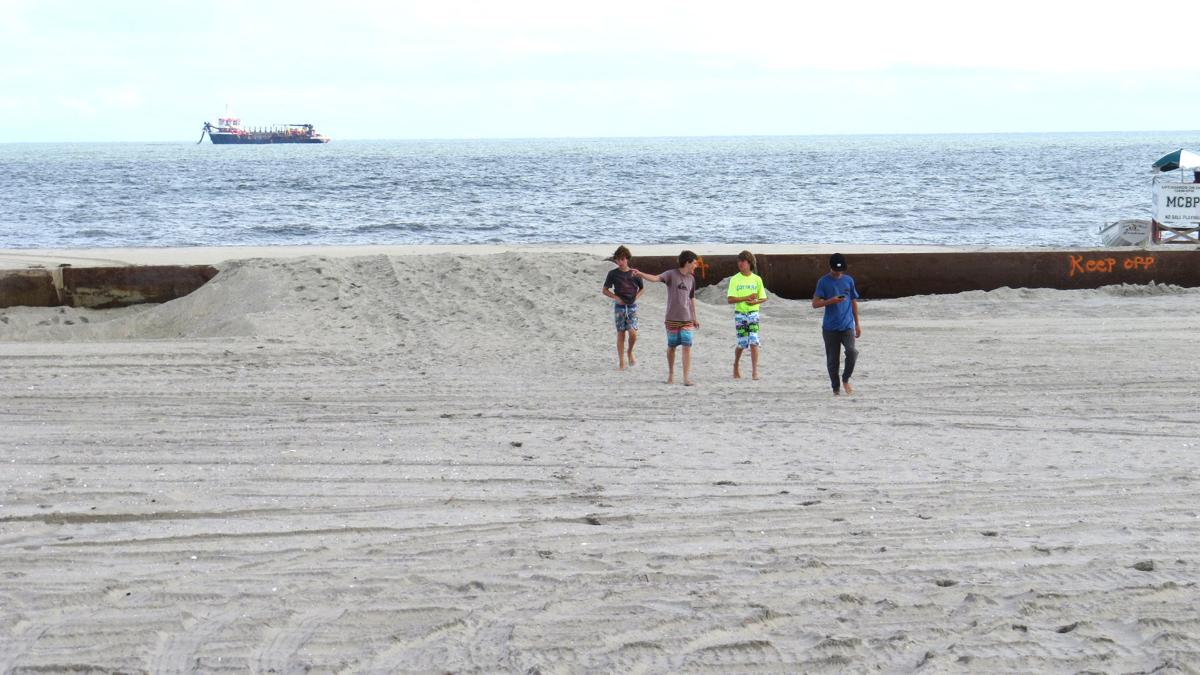 A group of boys cross over the pipe, while a dredge pumps sand needed to build a dune in Margate. 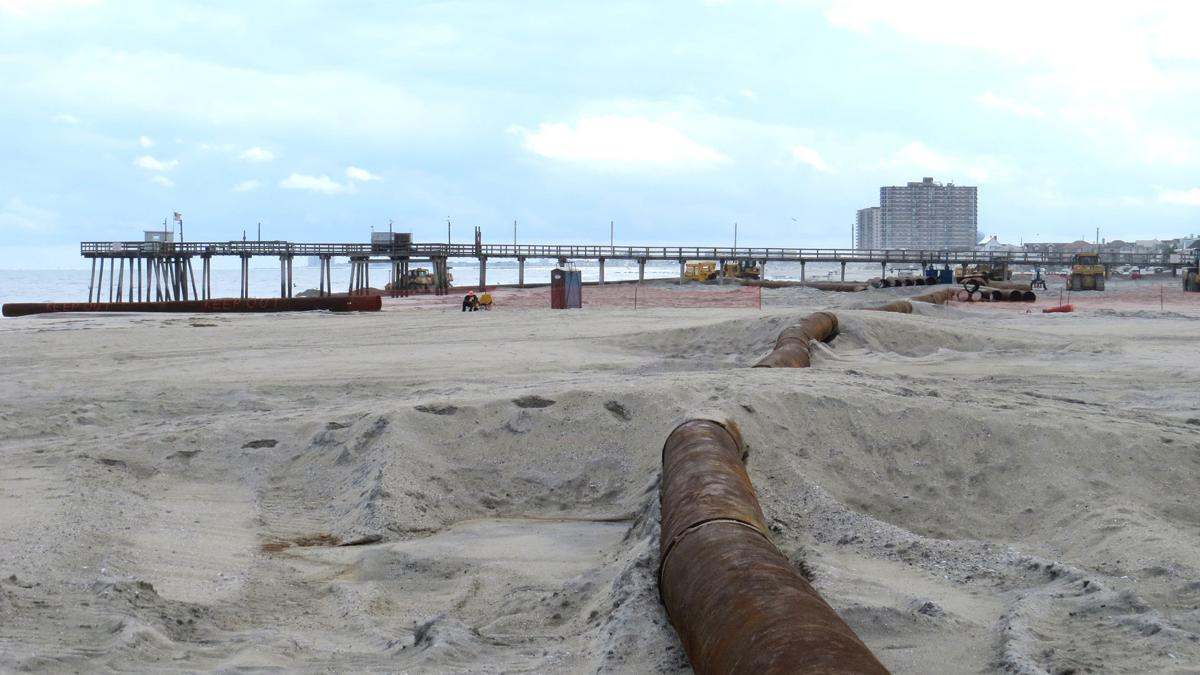 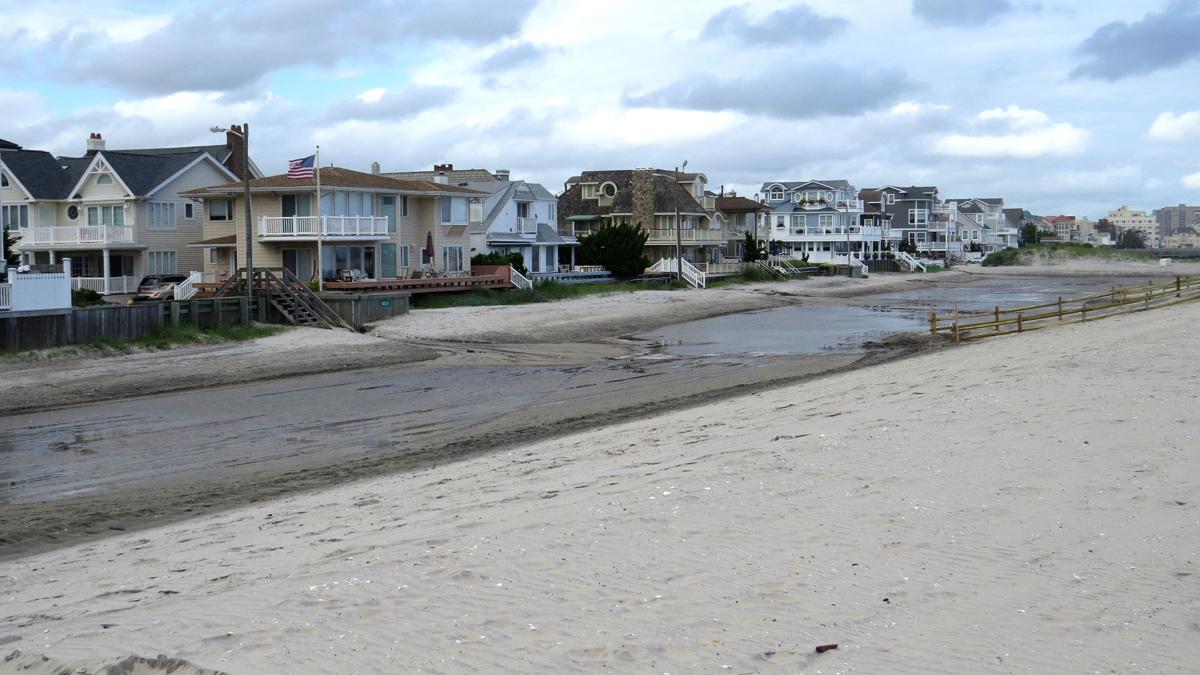 Stormwater has collected behind the new dune and is not percolating as fast as it should.

Sea gulls float in the pond behind the new sand dune near Delavan Avenue in Margate.

A sand dune has reached the bottom of the Margate Fishing Pier headquarters.

Nicole Granata of Boca Raton, Florida looks out from the porch of the home she rented for a family vacation at a large puddle of water and a wall of sand.

Stormwater has collected on the back side of the dune, where the beach has been lowered several feet.

A worker checks the water table of the sand on the back side of the dune near Clermont Avenue.

A Margate lifeguard crosses over the new dune on Clermont Avenue.

A group of boys cross over the pipe, while a dredge pumps sand needed to build a dune in Margate.

Stormwater has collected behind the new dune and is not percolating as fast as it should.

MARGATE — Terry Auerbach of South Exeter Avenue is “heartbroken” about what the U.S. Army Corps of Engineers is doing to the beach.

So is Irene Mederos of Fredericksburg Avenue, who has lived two houses from the beach for more than 70 years.

“It’s a mess. A real horror story. They are bulldozing the ecosystem here. They are spending all this money, but not concentrating on the bay, which is the real problem. Everyone I talk to is complaining. I can’t find one person to say this is a good idea,” Alten said.

“Margate had the best beach anywhere,” Mederos said. “Now, it’s not much of a beach.”

Auerbach, who has a beachfront property, said the rain Sunday and Monday collected in the drainage area behind the dune but did not percolate within 24 hours as Army Corps engineers promised.

“I’ve been here my whole life,” she said. “Now I have two Olympic-sized swimming pools outside my house.”

Several inches of water collected behind the 1,000-foot section of dune under construction from Frederickburg to Delavan avenues. A drainage pipe on Exeter Avenue that brought stormwater to the ocean has been covered up by the dune.

Auerbach said Margate has always had drainage issues, but it was effectively managed by the city’s Public Works Department.

“They dug a trench to take it away, and it was fine,” she said.

Even though she lost her first-floor view of the ocean, Auerbach said that is not her concern.

“Now I’m concerned about mosquitoes, trash and mold. I care about the ecosystem of the beach,” she said. “The entire city is really upset.”

A representative of the state Department of Environmental Protection said the problem is temporary.

“This is a temporary condition due to the construction activity, the pumping of the sand and water, and the heavy rains of the last couple of days. There’s just a lot of saturation,” DEP spokesman Bob Considine wrote in an email.

Public Works Director Frank Ricciotti said there is nothing the city can do to remove the stormwater and ocean water that has collected behind the dune.

“We can’t get in there because it’s still their active work site,” he said Tuesday afternoon.

“It rained hard, but it was not a major rain event,” Ricciotti said. “The water has nowhere to go, and it’s not percolating. It’s still muddy in areas, and there are large puddles.”

That’s exactly what city officials have been saying would happen. Their experts testified as such in court.

The Army Corps’ engineering plan removed about two feet of sand from the back side of the dune to lower the beach so stormwater could get through the scuppers and onto the beach, Ricciotti said.

“They essentially created a gully,” he said.

He believes when it’s hot and sunny, it will become a health hazard for residents and beachgoers.

On Tuesday, sand was being moved under the Margate Fishing Pier. At low tide at 4 p.m., there was no water under the pier.

“The dune is as high as the Margate Pier,” Ricciotti said. “You can no longer fish there.”

New equipment the city is purchasing at a cost of more than $300,000 will help scrape the back side of the beach, but it will not solve the drainage issue, Ricciotti said.

Nicole Granata, of Boca Raton, Florida, rented a house one removed from the beach for 10 days and was “devastated” to find out the dune was being constructed.

“Even the owner didn’t know it was going on,” she said. “In fact, she called me as I was driving here to say it might be happening, but she did not know exactly when.”

Granata said a huge puddle of water has been on the beach in front of her rented home since it rained Sunday.

“I’m so upset about it. You pay top dollar to be at the beach, and you can’t even utilize it. We have to walk two blocks down and go around. That’s not the worst thing, but there’s no view, and there’s noise from construction equipment all night long,” she said.

Mederos said she used to be able to sit on her porch and see the ocean, but now all she can see is a wall of sand.

“And you have to be ready for a long walk to the beach. That’s not easy for older people,” she said.

She had to walk through mucky sand to get over the dune.

“The Army Corps said they would fix any drainage problems. The drainage area they created is too deep, and the water table is too high. Am I going to have to walk through water every time it rains? It was a nice beach, now it’s a lake,” she said.

A worker from Weeks Marine, the company building the dune system, was digging a small hole in the sand.

He was measuring the water table.

“Basically, it’s a drainage collection system that would involve the discharge of the storm water to the ocean, which would alleviate the need for the city to use trenching from the bulkhead to the ocean. The plan would be in conjunction with the current Army Corps project.”

He was not specific about what the plan would entail.

“As of yesterday, they were trying to figure out how to correct the problem,” Mayor Michael Becker said Tuesday afternoon. “It proves our point that the water will not perc.”

Becker said the back side of the dune was lowered to 4 feet above sea level, and the Army Corps is considering raising it another foot.

“It’s just not percolating the way they said it would, and it’s not making my life any easier,” he said.

The project, which started in Margate on July 5, and will take two months, according to the Army Corps' latest schedule. The project will roll south to Longport by early September, and start in Ventnor in late August and early September.

Surf, sand, sun and yoga on the beach

WILDWOOD – With the gentle murmur of the surf and the cawing of seabirds as a backdrop, Charla Lewis leads a class in yoga on beach here four days each week through Labor Day.

ABSECON – The Knights of Columbus Villa Marie Council No. 6342 of Absecon and Galloway has awarded seven scholarships for the 2017-18 school year from its Edward J. Walls Jr. Memorial Scholarship Fund.

MARGATE — After fielding more than a week of complaints about what residents say is a flawed $63 million dune project, the city has scheduled …

MARGATE — Three days after a deluge created a lake behind a newly built sand dune at Delavan Avenue, the U.S. Army Corps of Engineers has begu…

2:30 p.m. Superior Court Judge Julio Mendez has halted the dune project that caused up to two feet of water to sit for several days and damage…

MARGATE — Shirley Frankel, a city resident for the past 50 years, can’t look at the ocean from behind a closed-off entrance at Plymouth Road w…

Sand under the Margate fishing pier puts anglers out of commission

MARGATE – The new sand dune under the Margate fishing pier on Exeter Avenue has rendered the pier practically unfishable. At 4 p.m. on Tuesday, July 25, there was no water under the pier.

MARGATE — Three days after a deluge created a lake behind a newly built sand dune at Delavan Avenue, the U.S. Army Corps of Engineers has begun pumping the stagnant water back into the ocean.

Century-old, private Margate pier could soon be open to the public

MARGATE — For nearly a century, the 500-foot Margate fishing pier has only been open to dues-paying members of the local anglers club.

Margate pier will open to public, with benches, tables and viewing area

MARGATE — Bob Pludo walked along the fishing pier’s walkway, and pointed to the sand below, where four-foot-deep water once splashed.