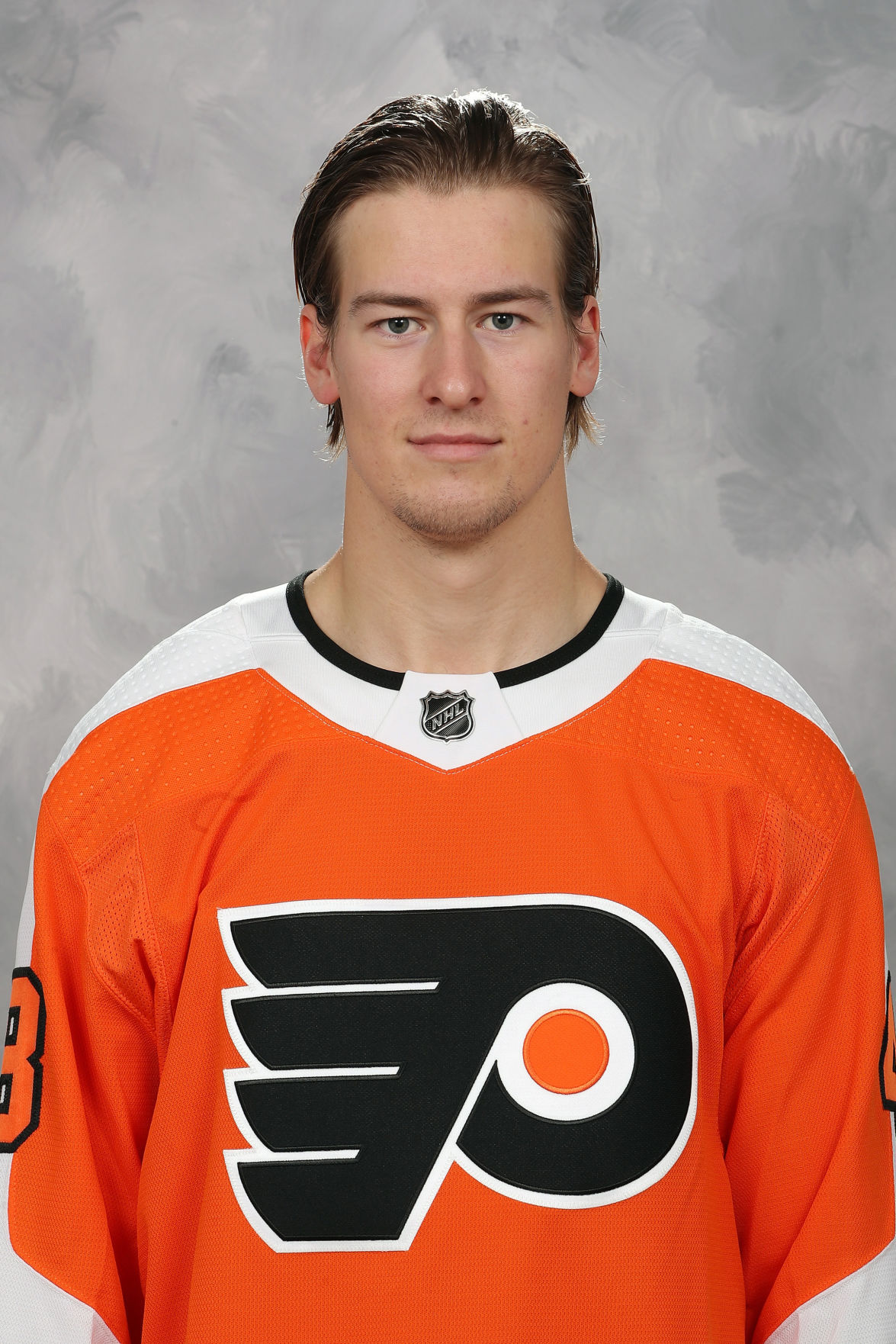 VOORHEES, NJ - SEPTEMBER 14: Robert Hagg of the Philadelphia Flyers poses for his official headshot for the 2017-2018 season on September 14, 2017 at the Virtua Flyers Skate Zone in Voorhees, New Jersey. (Photo by Len Redkoles/NHLI via Getty Images) *** Local Caption *** Robert Hagg

Philadelphia Flyers defenseman Robert Hagg peeled off his compression shorts and let all the boys take a look following a 3-2 win over the Washington Capitals last week.

The welt on his left butt cheek was fiery red, a souvenir from Capitals superstar Alex Ovechkin.

The boys marveled, as one.

"He blocked Ovie's One-T (one-timer shot) with his ass," goalie Carter Hart recalled, laughing, as he described the Flyers' game against the Capitals on Wednesday. "Then he had this big bruise on his ass. I was like, 'Dude ... man ... that's gotta hurt.' I mean .... Ovie? I don't like stopping them with my chest. I have all this padding."

Alex Ovechkin's shot hovers around the 100-mph mark. It's so powerful that he made a credit card commercial in which he fires pucks all around D.C. and into Virginia and Maryland.

By the next day, the south side of Hagg's backside was black and blue, and green and yellow. He couldn't sit straight; he listed to his right, like an imbalanced freighter. It is Hagg's latest badge of honor, and he's glad to have the chance to wear it.

Hagg, Philippe Myers and Mark Friedman, who was called up last Wednesday, were three of five Flyers defensemen under the age of 25 who helped beat the Boston Bruins in a shootout Monday night. Myers and Hagg, in particular, have been thrust into more prominent roles after injuries to Shayne Gostisbehere and Justin Braun.

The Flyers are 2-1-1 in their last four games, the last three against the powerhouse clubs from Washington (3-2 win), Tampa Bay (1-0 loss), and Boston (6-5 shootout win). Their 54 points gave them the Eastern Conference's eighth and final slot in the playoff heading into Wednesday night's game at the St. Louis Blues.

Consider these fortunate, unintended consequences. Playoffs and points be damned: The Flyers are nowhere near contending for a Stanley Cup. To eventually get there they need to develop their young defensemen as quickly as possible. That will mean taking all sorts of lumps along the way.

"There's growing pains. You play a team like Boston, they're three lines deep, and you can't hide them," general manager Chuck Fletcher said Tuesday morning. "Let's be honest, one of the big things with our team going forward is the growth of Carter Hart and the growth of our defense. Those kids need to grow. That's going to be probably our team identity in the future."

Certainly, the Flyers might make a playoff run or two while Claude Giroux and Jake Voracek are still around, but they're both in their 30s. When Ron Hextall was fired as GM last season, he left Fletcher an organization built from the back forward: from Hart, who is 21 and only midway through his first full season; through 23-year-old defenseman Ivan Provorov, who is already in his fourth season; and Travis Sanheim, 23, who is in his second full season and is fulfilling the promise he showed when he was drafted 17th overall in 2014. Their spots on this season's roster were assured.

That wasn't true for Philippe Myers, who didn't make the team out of training camp. It wasn't true for Hagg, either, despite playing 82 games last season and leading the team with 158 blocked shots and 258 hits. His 45 blocks and 79 hits rank fourth and second, respectively, this season, but, with the addition of Matt Niskanen and Justin Braun, he's played only 27 of 46 games. Now that Braun and Gostisbehere are hurt, Hagg and Myers, who has played in 28 games, have played more.

Fletcher has been generally pleased with the defense and its 2.98 goals-against average, an improvement from last season of 0.45 goals, or about 13%. Myers wasn't called up until the 12th game of the season, but he and Sanheim have lately been the No. 2 pairing. Fletcher is intrigued by their ceiling, but they can be as maddening as they are promising.

Myers' turnover led to the Bruins' first goal Monday night. Then again, Myers found Sanheim for the goal that knotted the game at 5 and forced overtime. It was Myers' 14th point of the season. He's a team-best plus-15. Hagg, a plus-3 with six points, scored his first goal of the season Wednesday against Washington, but — and it's a big but — he's willing to offer his posterior for target practice and leave the scoring to the rest of the roster.

"That's how I think I'll have a long career," Hagg said Tuesday.

Hagg's fearlessness is infectious, said Alain Vigneault, the Flyers' coach who has begged his forwards to emulate his defensemen's willingness to block shots. Sure enough, after the Flyers lost a faceoff in their zone midway through the second period, Travis Konecny blocked a shot from the right circle from Chris Wagner, then another from the same area by Charlie McAvoy that helped keep the deficit at two goals. Konecny had blocked two shots in his previous 11 games.

The kids will have to hold the fort. Braun's return from a groin injury has been accelerated -- originally believed to be 3-4 week injury when he went down last week, he now might be back in eight days -- but Gostisbehere's knee surgery Monday will keep him out for at least 3 weeks.

Their replacements lack their experience or their firepower, but they have their own virtues.

"When Hagger's in the lineup he brings a grit to our back end," Hart said. "He's tough. It's almost like he loves to block shots. I'm sure no one likes to block them, but he gets it done. He makes the simple, smart plays."