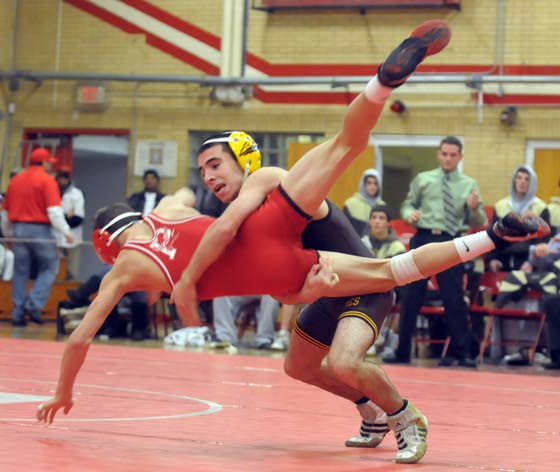 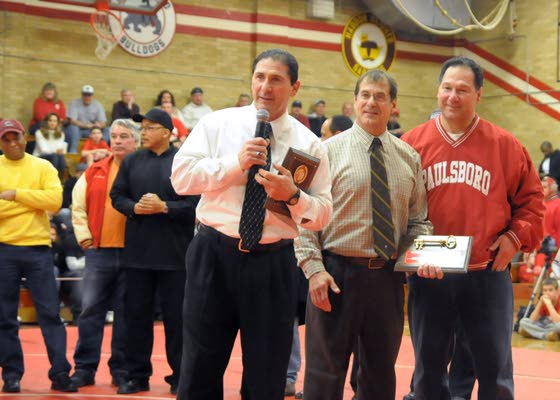 Barber, who grew up in Paulsboro and wrestled for the Red Raiders, was surprised with a touching pre-match ceremony.

Teammates from his high school wrestling days reminisced to the fans in attendance in the antiquated gym Barber once called home.

Barber was even presented with a key to the city.

One thing Barber did not take back home with him Saturday, however, was a win.

Paulsboro was not nearly as gracious on the mat as it was before the match.

"It just shows that everyone here has a lot of respect for Gene," Absegami 135-pounder John Harvey said of the pre-match festivities. "I just wish it could have turned out a different way for him."

Barber won his 500th on Jan. 20 against intradistrict rival Oakcrest. Morina picked up his 500th on Friday against West Deptford.

Each team won seven of 14 bouts Saturday, but Paulsboro had 15 bonus points to Absegami's 10. The five-point difference, along with a team point deducted from Absegami for unsportsmanlike conduct, was the difference in the match.

"Every time these programs get together, it's a battle," Barber said. "You never know what's going to happen. We thought we had a good shot coming in, and we did. A couple of little things, and it's a different story, but they were the better team today."

The match started with the teams trading shots.

Paulsboro's jumped out to a 12-0 lead with a stalling disqualification and a pin.

But after Absegami's Sal Giacomo pinned Paulsboro's Cody Croce, Michael Jiampetti fought back from a 9-1 deficit to pin Michael Zold to even the match at 12-12.

Former Vineland wrestler Sean DiEmma and defending state placewinner Joe Duca followed with pins for the Red Raiders, and a decision by Dymere Rappa made it a 27-12 Paulsboro lead.

But the Braves weren't done.

Harvey won a major decision at 135 and Troy Willette a decision at 140, setting up a big match at 145 between Absegami's Chris Hahn and Paulsboro's Louis Gattuso.

With the match tied 2-2, Hahn appeared to be working a half-nelson from on top but was called for stalling, and Gattuso was awarded a point.

Hahn was forced to release Gattuso and go for a takedown late in the match, but Gattuso fought him off and held on for the 4-2 decision.

Absegami's Shane Robinson won a decision at 152 to keep the team's hopes alive.

But with Alex Gong holding a 4-2 lead in the third period, Paulsboro's Matt Cosgrove reversed Gong and pinned him to put the match away.

Absegami had its chances, but the Braves made some uncharacteristic mistakes along the way that cost them in the end.

"I don't know what happened," said a frustrated Harvey. "Most of us came out hyped and ready to go, but we gave up too many bonus points. They were stingy. They didn't give up the bonus points, and we wanted to get pinned and stuff like that. They're a pretty tough team, but I think we should have beat them."

Morina is not only Paulsboro's coach. He is the school's principal and a councilman in the city.

"You can see how much Paulsboro appreciates our people," Morina said. "Gene's done a great job. He's been a great example for everybody in Paulsboro and at Absegami."

"We appreciate him. The Barber name here has been around for years, and you don't forget your own."

The plaque, which was presented to Barber by Morina and Paulsboro mayor John Burzichelli, read in part, "The community of Paulsboro would like to honor Gene Barber, a favorite son."

Barber, who is in his 33rd and final year at Absegami, joked after the match that he could put the key to good use.

"I'm definitely going to use it," Barber said with a grin. "Maybe on somebody's wine cellar or the bank or something."

Note-Absegami was deducted one team point for unsportsmanlike conduct during the 145-pound match.

*Match started at this weight

Absegami and Paulsboro have had some classic matches through the years, made more intense by the fact that coaches Gene Barber and Paul Morina are both Paulsboro alumni. The Red Raiders now lead the all-time series 13-6. Here are their matchups since 2000: