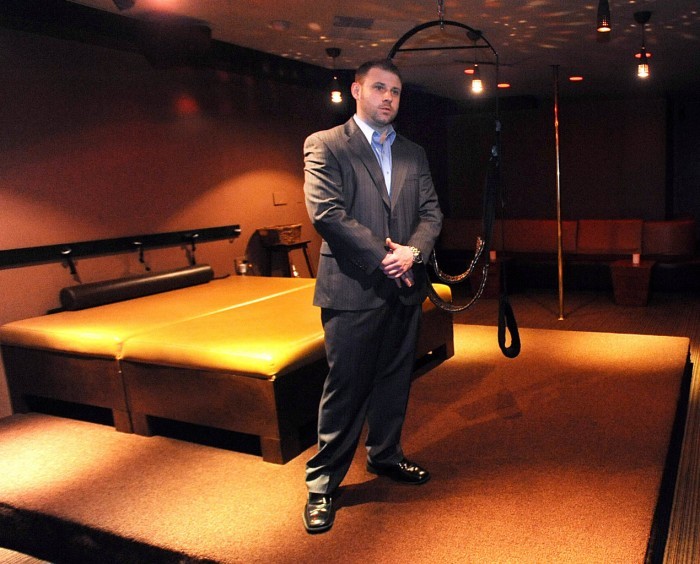 in Atlantic City, talks about the club. 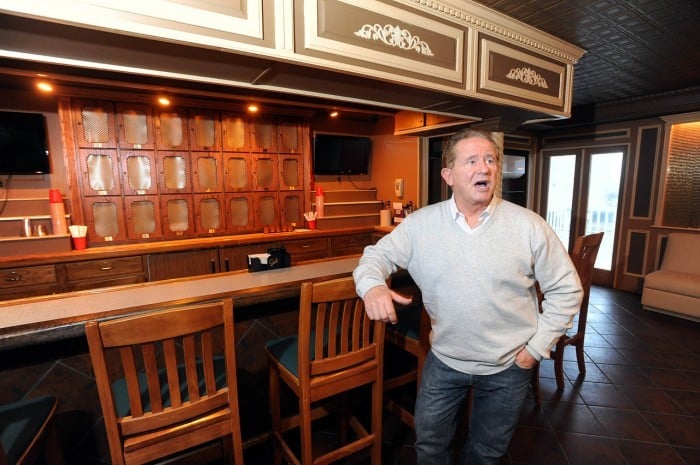 Tom Sherwood Sr., of Brigantine, owner and architect behind the Diving Horse entertainment complex, which includes Saints and Sinners, talks in the BYO bar area of the club.

in Atlantic City, talks about the club.

Tom Sherwood Sr., of Brigantine, owner and architect behind the Diving Horse entertainment complex, which includes Saints and Sinners, talks in the BYO bar area of the club.

Dance music pulses, spotlights rotate and an upscale crowd fills the first floor of Role Play Lounge on a Saturday night, a scene typical of small clubs in Atlantic City.

Some elements stand out, however.

Two couples passionately kiss on one of the couches. Everyone seems to be with someone. A video screen on the wall shows a nude woman pleasuring herself.

Upstairs, it becomes clear this club is very different. Some would be shocked; for others, it’s a thrill.

The clientele at these “adult playgrounds” is primarily couples, and they meet other couples inside, often knowing only each others’ first names. They have sex on the premises, sometimes in full view of strangers, sometimes switching partners.

They prefer their privacy, and in most cases they come to Atlantic City for a weekend to forget their everyday lives and explore their wilder sides.

“People go to a nightclub, but what do they want to do at the end of the night?” Role Play manager Eric Crewe said. “This is the best of both worlds.”

Role Play is entering its third year of operation this summer; Saints and Sinners opened last year as part of the complete renovation and redesign of the Diving Horse entertainment complex and hotel.

Tom Sherwood Sr., the owner and architect behind Diving Horse, said a concept such as Saints and Sinners was necessary to contend with the surrounding casinos.

“I knew I could only compete if I could make this more of an adult environment,” he said. “We’re looking for that special minority of people who want something a little more exciting than just gambling, dancing and eating.”

“I don’t want to say sex sells, but there you go,” Sherwood said.

People enter Saints and Sinners from the back of the Diving Horse complex, a more private entryway than the front door to the club on Martin Luther King Boulevard.

Couples meet in the hotel lounge and loosen up with a few drinks at the bar, which is strictly bring-your-own.

Caligula’s Temple, ostensibly the first club to advertise itself as a swingers club in Atlantic City, opened in 2004, but closed last year. Owner Larry Belfer said he chose to get out of the industry after Role Play and Saints and Sinners opened.

Belfer, an entrepreneur who has run a number of businesses in the city and who currently owns Coconuts strip club, said his business was steady for years as the only swingers establishment in the city.

But with three such venues open, he said, they were all competing for a limited, niche market of clients who mostly come from outside the area.

“It’s not my lifestyle. I was in it as a business,” he said. “We had a great club. I just didn’t think it was a growth area.”

Swinging grew in popularity during and after the sexual revolution of the 1960s.

Today, some of the people who lived through that period are still a part of the lifestyle, but club owners are also seeing a younger generation get involved.

Crewe said the clientele at his club ranges in age from 22 to 52. Sherwood said his customers are between 28 and 48 years old.

On a recent Saturday at Role Play, that age range looked correct, with men leaning toward the older end of the range and the women seemingly younger.

The women wore tight dresses, and men wore button-up shirts and jeans, similar to any other club in the city.

On the second floor, several people wore nothing. One couple had sex on a bed in the middle of the room, and a few others did so in rooms with no doors while other couples stood outside and watched.

Role Play and Saints and Sinners market themselves as upscale experiences, and shy away from the term “swingers” itself.

“We’re trying to get it out of that grimy swinger’s club perception, where you have a hot tub with stuff floating on the top of it,” said Crewe, of Egg Harbor Township. “We try to take it to another level.”

The memberships include confidentiality agreements, stipulating that members are not to take photos or videos in the clubs.