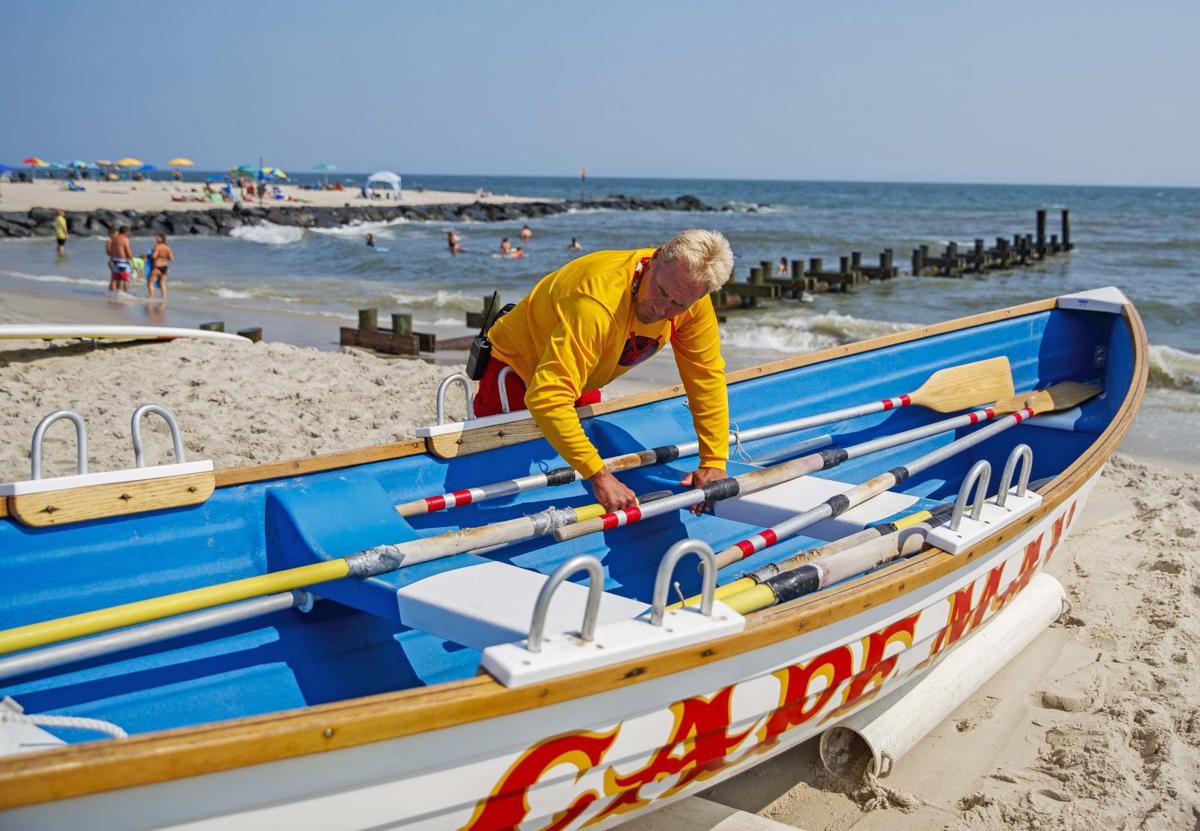 ‘If we have a northwest wind down here, it tends to make it (the waves) flatter,’ said Geoff Rife, captain of the Cape May Beach Patrol and a veteran of ‘quite a few’ lifeguard competitions since the 1980s. 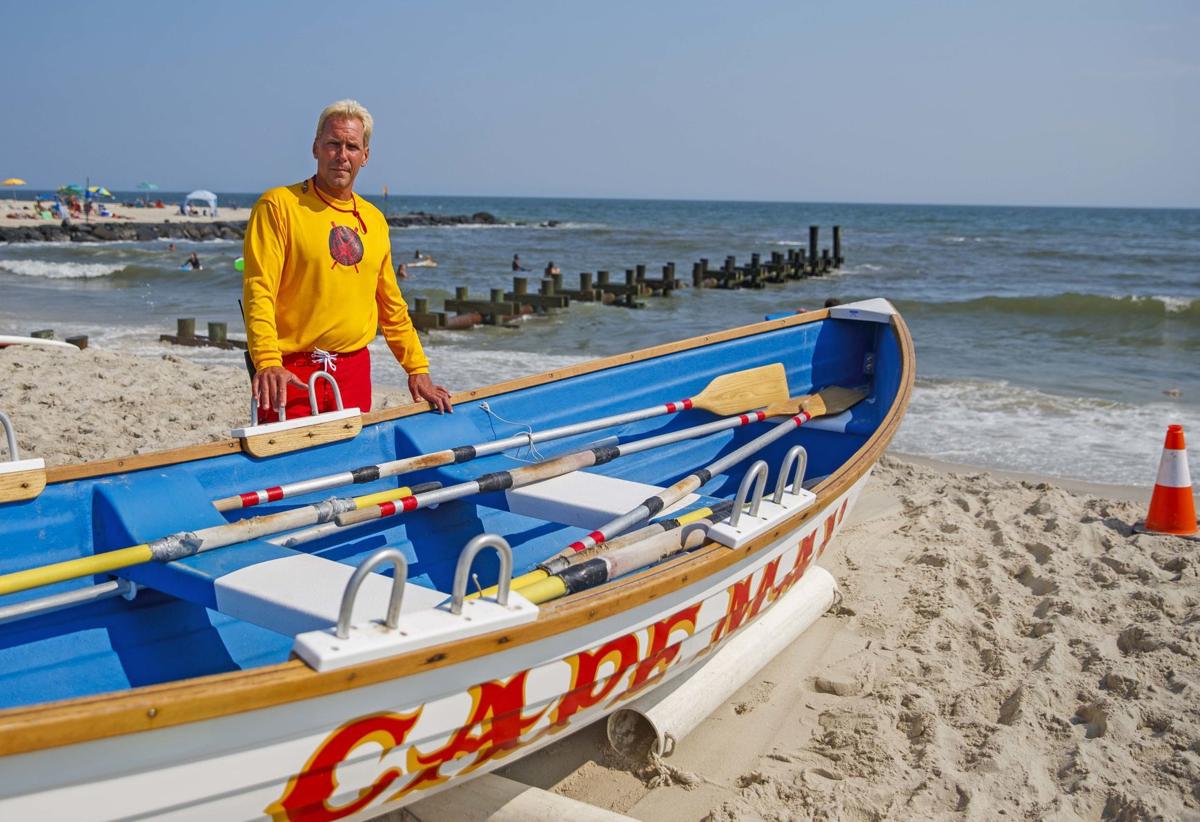 'If we have a northwest wind down here, it tends to make it (the waves) flatter,' said Geoff Rife, captain of the Cape May Beach Patrol and a veteran of 'quite a few' lifeguard competitions since the 1980s.

‘If we have a northwest wind down here, it tends to make it (the waves) flatter,’ said Geoff Rife, captain of the Cape May Beach Patrol and a veteran of ‘quite a few’ lifeguard competitions since the 1980s.

'If we have a northwest wind down here, it tends to make it (the waves) flatter,' said Geoff Rife, captain of the Cape May Beach Patrol and a veteran of 'quite a few' lifeguard competitions since the 1980s.

Talk to some of the lifeguards rowing during the Ocean City Beach Patrol Women’s Invitational on the 34th Street beach, and you’ll hear their wish list of water conditions for the race.

“Flat, with a little bit of rollers,” said Claudia Scherbin, 17, of the Margate Beach Patrol.

Depending on the weather, ocean conditions can either make or break a race, as lifeguards’ experience plays a key role in determining what is smoothest sailing for them.

“The rowing conditions I find more favorable for myself are usually flat conditions. They’re something really good to ride in on but won’t crash into my boat,” said Maggie Shaw, 25, of Harvey Cedars.

While Shaw did not win the rowing event at the invitational last week, her American Taplin Relay team came in second place.

“We’re not tall or super built, but we love the rough waters because if you’ve got experience, you can maneuver those waves, even for short girls,” said Kristine Auble, 24, of the Margate Beach Patrol.

Ocean waves are created by the wind. The main factors that determine a wave’s height are speed and fetch, or the distance at which the wind blows over the water from the same direction. The longer the fetch and faster the speed, the greater the wave-building action. However, direction plays a vital role as well.

“If we have a northwest wind down here, it tends to make it (the waves) flatter,” said Geoff Rife, captain of the Cape May Beach Patrol and a veteran of “quite a few” lifeguard competitions since the 1980s.

A 6 on the scale, with 22 to 27-knot winds, indicates larger waves with white caps. However, winds from the west to north in New Jersey at that same speed can result in a scale rating of 3, bringing scattered white caps with crests just starting to break, according to njscuba.net.

Do northerly or westerly winds provide an advantage?

“The people who row in the crew shell probably prefer that,” Rife said.

The reason, Rife said, is because people who row crew during the winter are used to rowing on rivers and rowing machines, which give smoother rides.

“Today it’s not a rough ocean, so we’ll get through the surf pretty fast, have a good turn and shoot the waves from there,” said Stinson, who rowed with her sister during the doubles race.

For lifeguards like Rife and Auble, though, the choppier the better.

“Even though we’re not quintessential rowers, we like it rough,” Auble said.

Growing up rowing in the Van Duyne brand of boats, which are common in South Jersey, is a big help when it comes to claiming the top prize, too.

“The Van Duyne is specifically geared to South Jersey because of the way that our swells and winds are,” Rife said.

That also helps when lifeguards go back to work the next day, protecting and rescuing beachgoers.

“The bowels are shaped to physically go through the waves. In the stern plate, if we need to bring in the victim, they can sit here. ... If we need to do CPR rescue breathing, we can put the victim in the appropriate manner,” Rife said.

A dry morning with scattered afternoon storms. Storms may be severe.

A mix of sun and clouds with isolated afternoon storms.

A mix of sun and clouds

On The Road with Joe

On The Road, a New Jersey Press Association Award Winning segment in 2018, is back in 2019 with more interviews, more adventures and more digg…

The severe risk from thunderstorms will be over as we flip the page to August. However, some wet weather will linger around into the weekend.

Dog days of summer pattern through weekend, next week

Looking ahead at the next seven days, most will sit in the summer doldrums of 80-degree temperatures, some humidity, plenty of dry time, with …

How dry will this weekend be in South Jersey?

Saturday will be the wetter of the weekend days as a wave of tropical moisture rides around a large high-pressure system in the Atlantic. Howe…

After a Tuesday that brought flooding rain in between peeks of sunshine, Wednesday will see the risk for more of the same.


Atlantic City Beach Cam can be viewed live at NJBeachCams.com